It will be very easy to shew that Arcadia must have been somewhere in the modern eparkhia of Mirabello (Agios Nikolaos) (..) Kritsa is where Arcadia in all probability existed. (..) The lofty mountains of Lassithi abound in springs and rivulets: most of the villages are surrounded by fine groves of olive-trees. (..) In the mountains of Lassithi is found a picture which is believed to have come, spontaneously and unaided, through the air, from Constantinople.
Robert Pashley - Travels in Crete - 1834 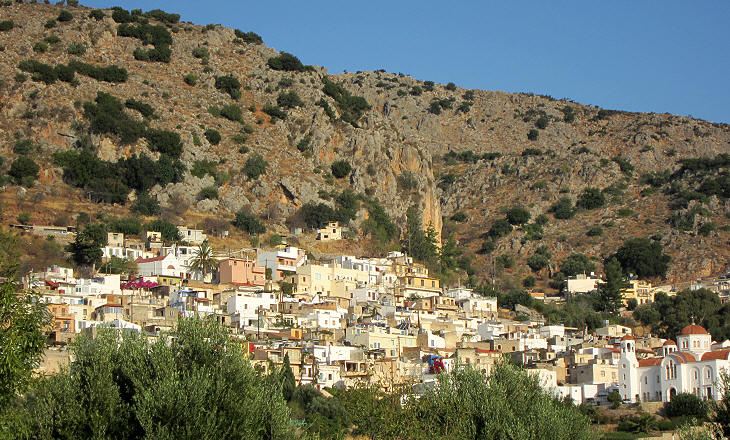 The village is located in a panoramic position at the foot of the Lasithi plateau and it is surrounded by olive groves; some of the trees are very old because olive cultivation, characteristic of this part of the island, has been carried out for centuries.
The Venetians acquired control of Crete in 1204-1208. They promoted the development of an agriculture aimed at the production of commodities which could be exported such as olive oil and wine. This policy was pursued by employing local peasants who were kept in a condition of serfdom which gave rise to a series of rebellions (in 1212, 1229, 1264, 1333 and 1341). 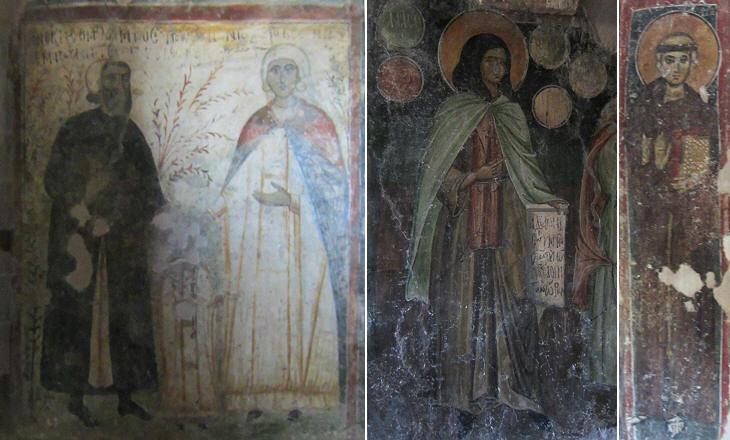 At Kritsa the frescoes at Panagia Kera, a church outside the village, indicate that the Venetian and the local culture were not as hostile one to the other as one could assume from the frequency of the rebellions. It was built in the XIIIth century (you can see it in the image used as background for this page) and in the following century it was decorated at the expense of a local wealthy man. Its three altars are dedicated to the Dormition of the Virgin Mary (central), St. Anne (left) and St. Anthony the Great (right). The donor was portrayed with his wife and their daughter on the wall near a side entrance; they wear their best clothes. The donor was probably an elder of the village whom the Venetians integrated into their aristocratic government system.
The portrait of St. Francis of Assisi indicates that the theological disagreements between the Patriarch of Constantinople and the Pope did not necessarily prevent a peaceful coexistence of Orthodox and Catholic communities at a local level and their common veneration of a saint who was particularly popular. The walls of the church are entirely covered by frescoes portraying Jesus Christ, the Virgin Mary and saints; the ceiling houses some more complex paintings depicting scenes from the Old and New Testament which however are set in the XIVth century. Herod the Great and his soldiers are portrayed as if they were the king and the army of a crusader state in the Levant; another fresco depicting the Last Supper shows a banquet with Venetian ware. 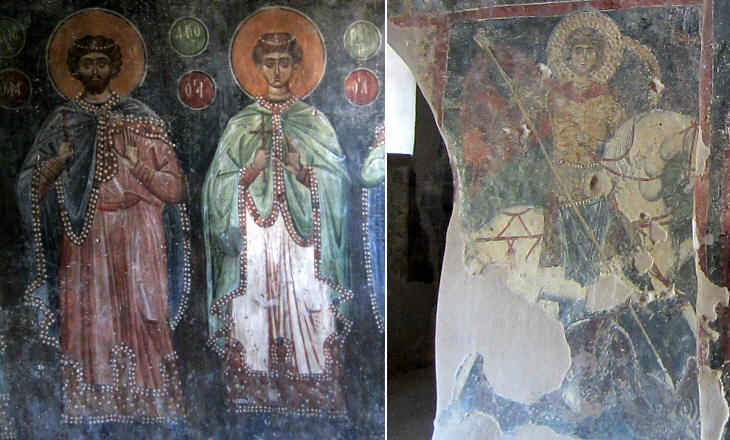 Some of the frescoes are more in line with traditional Byzantine iconography; martyrs are portrayed as young men wearing very elaborate robes and pearl diadems (you may wish to see similar images at Agios Dimitrios at Thessalonica).
St. George is among the most venerated saints of the Orthodox Church, but the iconography which portrays him as a knight killing a dragon derives from the Thracian or Macedonian Horseman, a very common ancient funerary relief in northern Greece. 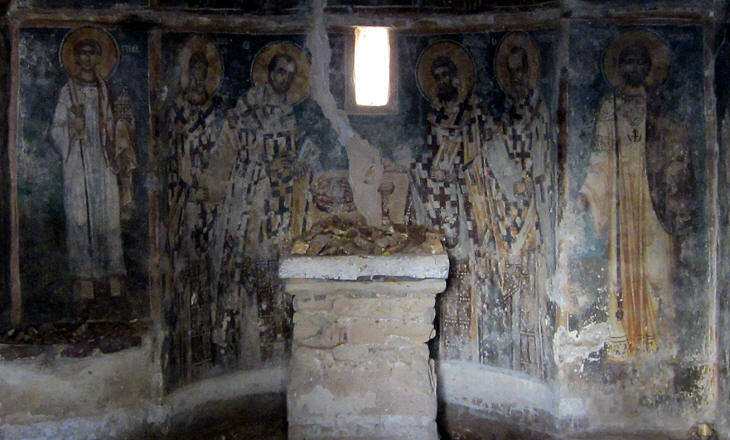 Panagia Kera is not the only church of Kritsa with an extensive fresco decoration. In September 2011 Agios Ioannis Prodromos, a small church near the cemetery of the village, was in the process of being restored. It is decorated with more traditional Byzantine images such as the Fathers of the Church (probably St. Basil the Great, St. Gregory of Nazantius, St. John Chrysostom and St. Gregory of Armenia) in the apse; they are dressed in the typical white and black robes which can be seen at the Parecclesion of the Pammakaristos Church in Constantinople, but their bodies and faces are not as rigid as in that church. 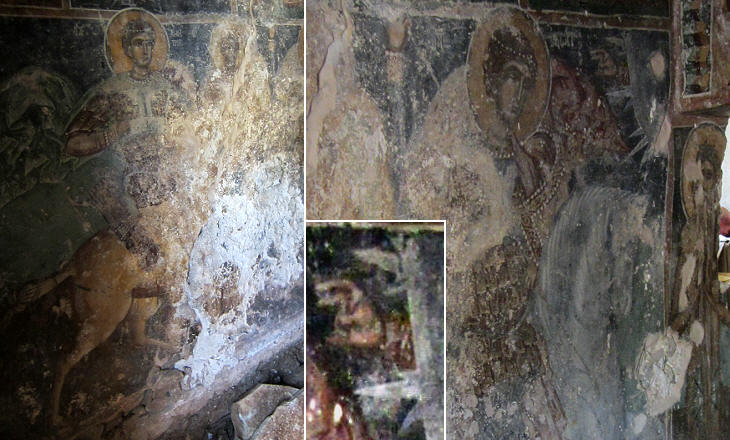 St. George is the most popular of a series of warrior saints which include Sts. Sergius and Bacchus, St. Demetrius, St. Theodore the Recruit and St. Theodore the General. They were Roman soldiers who suffered martyrdom because of their Christian beliefs and initially they were not portrayed as knights; the change occurred when they became a symbol of the fight against the Muslims (you may wish to see the fresco portraying St. Theodore and the Hand of God at Qara in Syria). 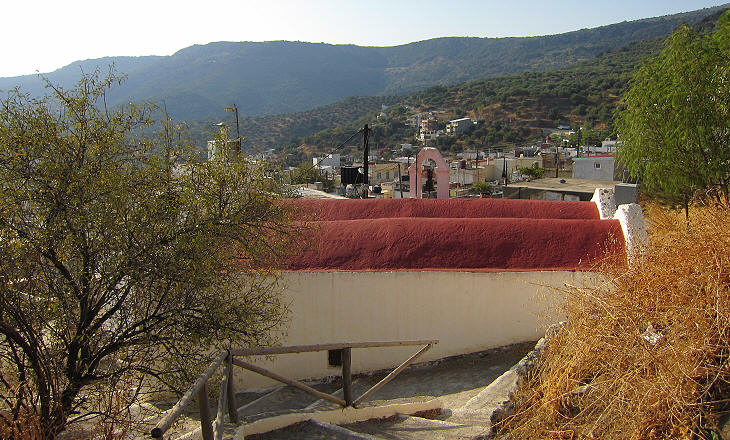 Many small churches can be found inside the older part of the village which is located uphill. They are all very similar in size and design. The presence of twin churches could indicate that Orthodox and Catholic believers, after having marched together in processions at the main festivities, attended separate services in two adjoining churches. The celebration of Christmas or Easter occurred on the same day until 1582, when the reform of the calendar by Pope Gregory XIII introduced a difference in the timing of these festivities. After the Ottoman conquest of Crete in 1645-1669, many Cretans converted to Islam, but new churches continued to be built at Kritsa, although their decoration showed the influence of Islamic art. 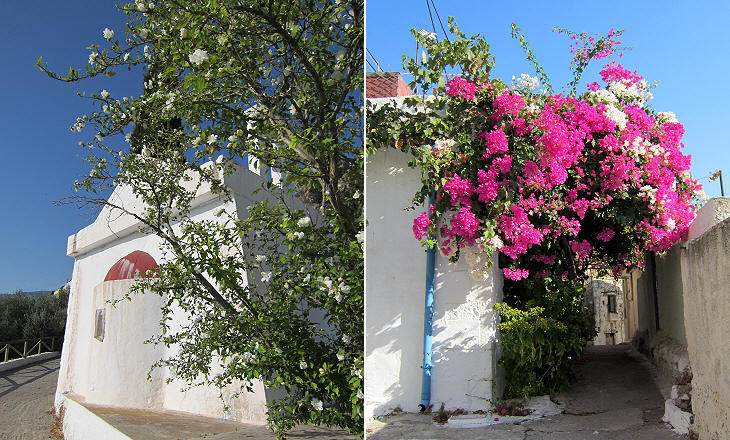 Flowers and blue skies at Kritsa

The companies operating the large cruise ships which call at Agios Nikolaos suggest their passengers make an excursion to Kritsa, chiefly for its handmade lace.