Nothing can be more agreeable to the eyes of a stranger, especially in the heats of summer, than the great number of public fountains that appear in every part of Rome, embellished with all the ornaments of sculpture, and pouring forth prodigious quantities of cool, delicious water, brought in aqueducts from different lakes, rivers, and sources, at a considerable distance from the city. These works are the remains of the munificence and industry of the antient Romans, who were extremely delicate in the article of water: but, however, great applause is also due to those beneficent popes who have been at the expence of restoring and repairing those noble channels of health, pleasure, and convenience.
Tobias Smollett - Travels through France and Italy - 1766

This page is a directory of links to the pages where fountains are shown. There are two lists:

The districts of Rome were defined in a precise manner in 1743 by Pope Benedict XIV. The area inside the walls was divided into 14 districts called Rioni. One of the criteria followed in the definition of the districts was to have an even distribution of the population, at the time mainly living near the river. This explains why the area of the rioni is so different. 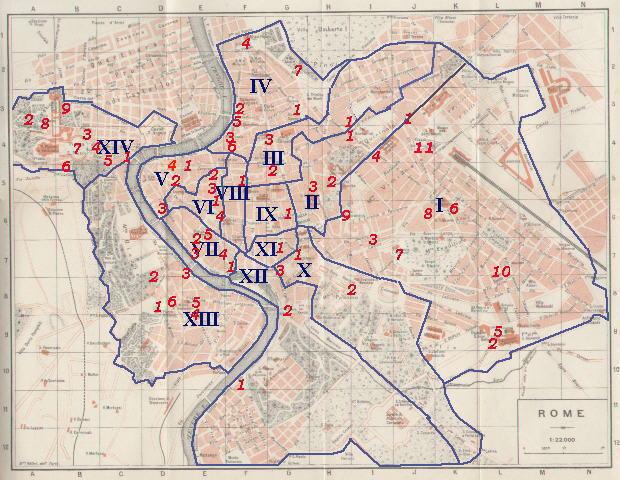 I - Fountains in Rione Monti

Fountains outside the Walls of Rome

The image used as background for this page shows a detail of Mostra dell'Acqua Felice, that for the tables a detail of Fontana di Trevi.