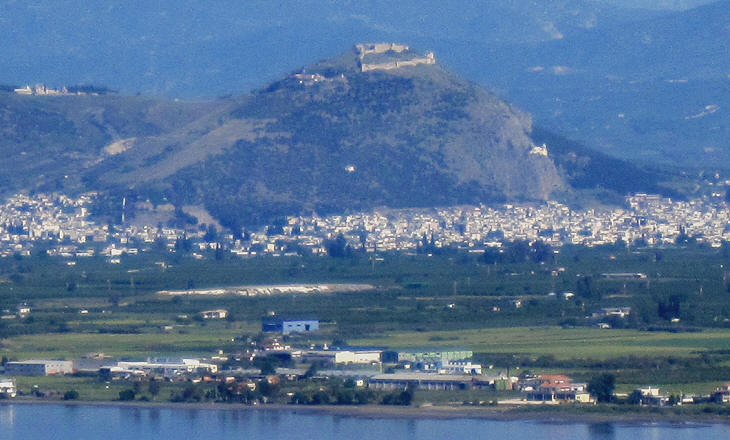 The modern town of Argos, occupying almost the whole of the flat part of the ancient city, presented itself. The towers of the old citadel had long been the principal object of my admiration, from my first entry into the plain. These fortifications have been deserted for some centuries, but they are on the foundations of the walls of Larissa (the acropolis of Argos); and perhaps nothing exists which bears so imposing a character as this archaic fortress of the earliest civilized inhabitants of Greece. No other city could have produced such an effect as Argos, extending from that lofty summit to the plain.
William Gell - Narrative of a journey in the Morea - 1823
May 2nd, 1806 From a height we had a view of the city of Agamemnon, standing in a rich and extensive plain, bounded by mountains on all sides but the east, where it stretches to the sea, and to the port of Napoli di Romania. This is one of the most beautiful prospects of Greece. (..) On a mountain to the left, which commands it, is a ruined fortress of the Venetians. Turner
The ancient city of Argos played a major role in the development of an early Greek civilization which is called Mycenaean after the artefacts which were discovered at Mycenae in 1876. 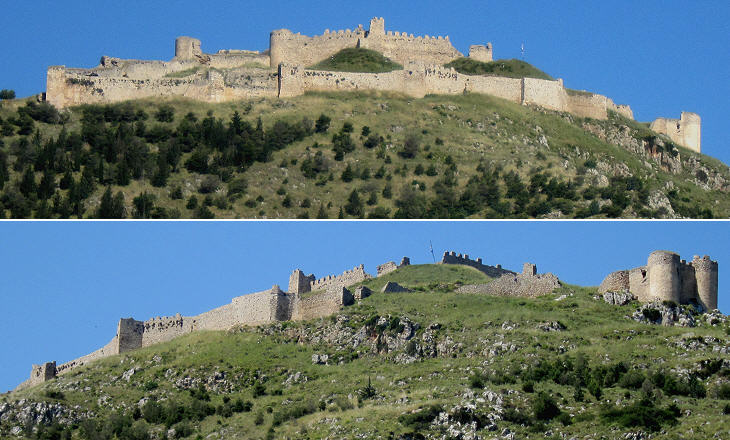 (1804/1805) The towers, which make a respectable figure from below, and have a most imposing appearance when first seen on the road, are of Venetian construction.
William Gell - An Itinerary of Greece With a Commentary on Pausanias and Strabo - 1810
During the VIth century the acropolis was turned into a small Byzantine fortress. In 1204 the Frank knights who participated in the Fourth Crusade conquered Constantinople and then partitioned most of the Byzantine Empire among themselves. The Peloponnese was assigned to Geoffrey I of Villehardouin, who was helped in establishing his rule on the region by Othon de la Roche, Duke of Athens.
Argos and the nearby port of Nauplia were given to Othon de la Roche as a separate fiefdom of the Principality of Achaea, the name given to his possessions by Geoffrey of Villehardouin.
The fiefdom was eventually acquired by the Enghien family who sold it to Venice in 1388. 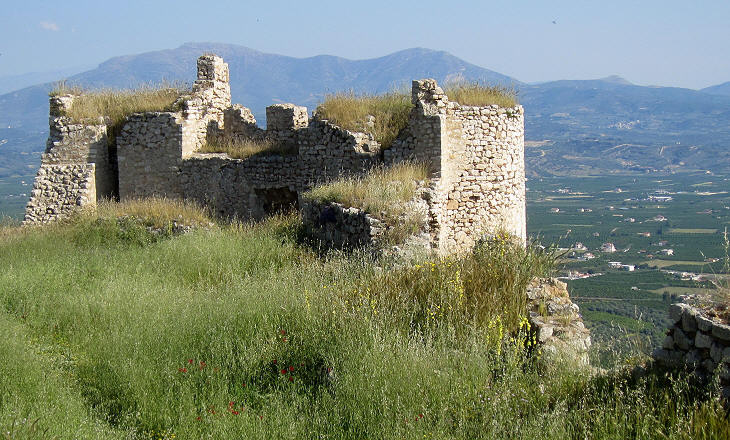 The fortress is composed of the inner castle corresponding to the ancient acropolis and of a large enclosure surrounding it. It is mainly a medieval fortification with many towers of different shape; the northern side of the external walls was strengthened by two massive round towers. 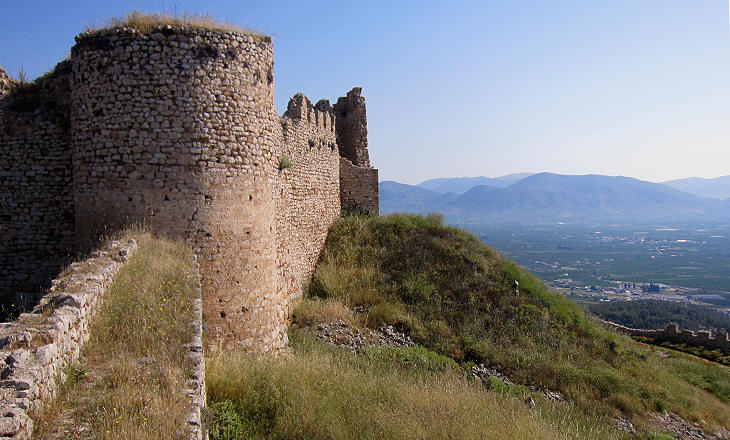 Tower and wall of the inner castle

In 1395 Argos was raided by the Ottomans and the Venetians repopulated the town by bringing in Albanians. The light cavalry of the Venetian army was made up of stradiotti, Albanian mercenaries, known for their unorthodox tactics and cruelty. In 1463 the Venetians surrendered Argos, but they were able to retain control of Nauplia until 1540.
The Ottomans did not care to upgrade the fortifications of Argos to the new requirements brought about by the development of cannon. In 1686 they preferred to abandon the fortress to concentrate their troops in the defence of Nauplia, which was besieged by the Venetians. 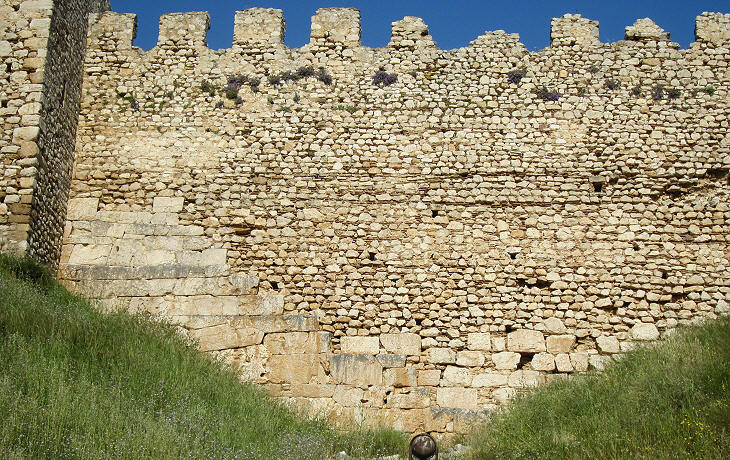 The acropolis of Larissa had only one large gate, which must have been on the south, the other Sides being too steep for a road. On the summit are the remains of the inner inclosure or curtain of very antient, but not Cyclopian masonry. Gell (with a likely reference to the walls of Mycenae and Tiryns).
During their occupation of Morea (Peloponnese) in 1686-1715 the Venetians embarked on a large program aimed at strengthening old fortresses e.g. those of Methoni and Koroni and building new ones e.g. that of Palamidi near Nauplia, but they did not significantly upgrade the fortress of Argo, nor did the Ottomans when they recaptured it, probably because it lacked access to a source of water. 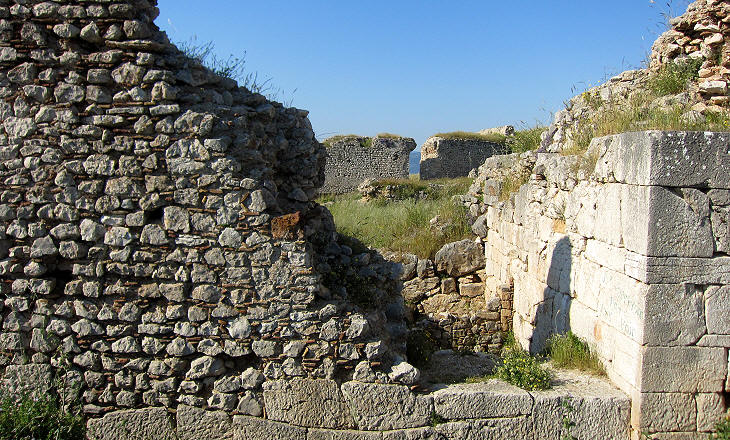 The passage to the inner castle

At the outbreak of the Greek Independence War in 1821 Argos and its fortress soon fell into the hands of the rebels. In July of the following year a large Ottoman army entered the region and laid siege to the fortress, but the Greeks preferred to sneak out of it at night. During this event and a second similar episode which occurred a few years later the fortress was damaged. As its military importance was low in the context of modern warfare it was abandoned. 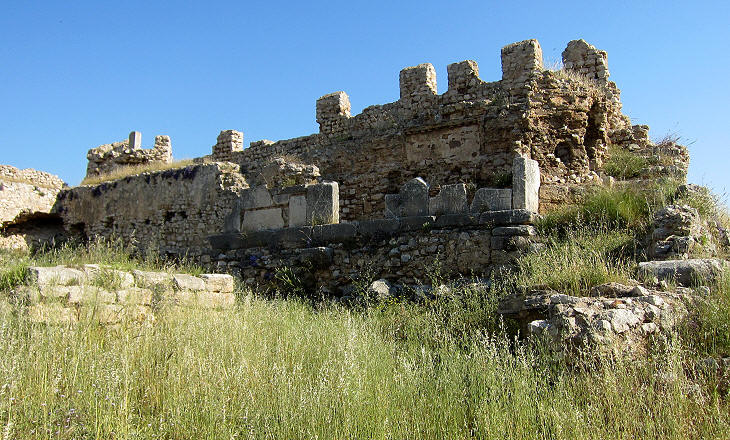 Foundations of temples inside the inner castle

There seem to be no traces of the temples on the hill, but it commands a magnificent and extensive view of the gulph, and of the plain of Argos. Gell