- Modon (Methoni)
(detail of a 1651 engraving by Marco Boschini)

We doubled the Cape Sapienza, (..) before which lie, in a row, the little Islands Sapienza, Carrera, and Venetica, well known to the Pirates of Barbary, who use to skulk with their Vessels behind them, attending the Barques that come out of the Gulph of Venice, and others which they can master, bound that way for the Levant.
A journey into Greece by George Wheler, Esq., in company of Dr. Spon of Lyons - 1682
(April 28, 1805) From Neokastro/Navarino the road to Metoni lies through plantations of olives. (..) My lodging is in a kiosque, or Turkish casino, in the garden of the commandant. This garden and several others mixed with corn-fields and olive plantations, embellish a small plain on the eastern side of the town.
William Martin Leake - Travels in the Morea - 1830
Maritime routes in the Mediterranean closely followed the coastline. This made Modon, a small harbour at the tip of the western Peloponnese peninsula, across from the Island named Sapienza (Wisdom), a strategic point on the route from the Ionian to the Aegean Sea, a key section of the route from Italy to the eastern Mediterranean. For this reason Modon and the nearby fortress of Corone were called the "eyes of Venice".

The fortifications are in a wretched state of repair, though in construction they are far more respectable than those of Neokastro; the land-front has a much higher profile, and there is a ditch intended to be wet and to communicate from sea to sea, but now dry and full of rubbish. Leake
In particular Modon was key to a very profitable business: the pilgrimage to Jerusalem. The pilgrims embarked at Venice for the Holy Land on regularly scheduled sailings, June through September to take advantage of the northwest wind. From 1227 on, the Venetian government controlled the pilgrim business: ships could not be overloaded, and the captain was obliged to take pilgrims where they wanted to go and not to engage in trading along or off the route unless agreed upon in the contract. In the course of seven weeks they could sail along the coasts of Istria and Dalmatia, through the Ionian Islands, stopping at Modon, then on to Cerigo (Kythira), Candia (Crete), Rhodes, Cyprus, and finally Jaffa. After visiting Jerusalem the pilgrims would often journey overland to the monastery of St. Catherine on Sinai and then to Egypt, whence they would sail from Alexandria back to Venice.

What follows is an account written by Felix Fabri, a pilgrim in 1483. He stopped in Modon, before he and his fellow pilgrims continued on to Crete (source: Felix Fabri, "The Wanderings of Felix Fabri," vol. 7 of The Library of the Palestine Pilgrims' Text Society, 1887-1897, p 184-186).
On the fifteenth (of June, 1483), which was the third Sunday after Trinity, and the feast of St. Vitus and St. Modestus, when the sun rose, the galley-slaves begun to work the galley along with their oars, because the wind was not fair for the harbour of Metona (Modon), from which we were not more than one German mile distant. By great labour we got into it about eight o'clock in the forenoon.
Fabri and his companions tour the Venetian city of Modon:
Straight(a)way we got into the boat and rowed to the city, where we found the pilgrims who sailed with Master Augustine (in the second, rival Venetian pilgrim galley bound for the Holy Land). I took my lords and some other pilgrims to the church of the Preaching Friars, and there we heard high Mass. The prior of that place and the other brethren knew me well from my first pilgrimage (in 1481). After Mass was over we went to the house of the bakers, where biscuits are baked for seafarers, wherein dwells an old German, and there we had our dinner cooked, and dined. The other pilgrims went over to the house of the Teutonic Knights and there provided a meal for themselves. After dinner we went up to the walls of the town and walked round upon them, and admired its impregnable fortifications. It is not an island, but part of the mainland (a peninsula), whereof the whole (of the rest of the mainland) belongs to the Turks. In this port lay also the galley of Master Augustine, and all his pilgrims were in the city, so we made a happy and merry fellowship with them, though this displeased the captains, who thought that because they had quarrelled and were at enmity one with another, even so we ought to be tainted with the same venom, and ought to avoid each other's company. But we took no heed of this, and both ate and drank together with them, and we brought them on board and showed them our galley, and they took us to see theirs, and so we spent the day together until vespers, rejoicing with each other at having met in the middle of the sea; for the city of Modon is said to be midway between Venice and Jerusalem. About vespers both patrons blew their horns to call their pilgrims on board, and when we heard this signal we all went on board the galleys. That same evening Augustine and his pilgrims left the port, but we remained there until the morrow.

Walls of the inner castle and its entrance

Another pilgrim, Pietro Casola, made his journey to Jerusalem in June 1494. Unlike most other chroniclers of the pilgrim experience, he did not let his piety stifle an inquisitive and observant nature. Sailing at night between Zante and Modon, he provides us with just the sort of account otherwise lacking in the literature: All complained of the extreme heat except the Germans and certain other nations, who - said the venerable Don Francesco in his sermon - ate and drunk from morning till night and then went supper less to bed. These individuals did not feel the heat; the rest of us did unfortunately. And thus ended the day of St. John the Baptist. At length by the grace of God, we arrived at Modone at the twentieth hour, and all landed in great haste, without waiting for the casting of the anchor, so great was the desire to go on land. Although, in truth, there was not much comfort in the way of lodgings to be found there (..) it was as much as we could do to find a few eggs.

The inner castle and the whole fortress seen from its northern end; in the background the island of Sapienza

Towards the sea both towers and walls are falling to ruin. (..) The islands of Sapienza and Skhiza are considered valuable for the pasture which they afford to cattle and horses in the spring. Leake
The walled suburb mentioned by Pietro Casola was the vast area between the medieval fortifications and the sea: these were made up of a simple curtain of wall with square towers placed at regular intervals. 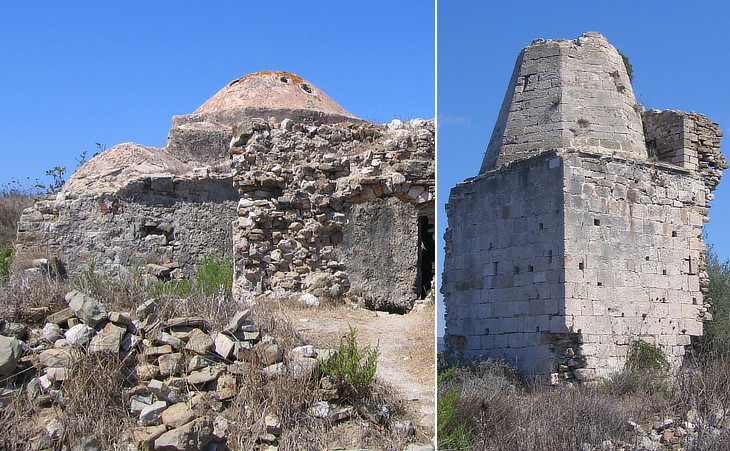 The town of Methoni contains 400 Turkish families, living in poverty and idleness. Their chief traffic is in black slaves, whom they embark on the coast of Africa, and sell to the Musulmans of Greece. Leake
It is not easy to say whether the Greek or the Turkish town is the more wretched, one being built in the meanest and most irregular manner; while the other, though surrounded by walls, presents only a melancholy spectacle of deserted streets and dilapidated habitations.
William Gell - Narrative of a journey in the Morea - 1823

(above) Winged lions on Bastione Loredan (left) and Bembo (right); (below) inscription on Bastione Bembo

Mothoni is one of those convenient and important situations which have always been occupied: and hence it is that we find no remains of Hellenic antiquity, the materials having been long since converted to the repair of modern dwellings and fortifications. Leake
In 1460 the Venetians built new walls which could withstand artillery fire and a large quadrilateral bastion named Bembo after the town governor. They also built walls which reached the sea and included the market square.

(left) Granite column which supported the winged lion (also in the image used as background for this page); (right-above) capital with evidence of inscription; (right-below) other reliefs depicting the symbol of Venice

Just within the land gate is the old Venetian piazza; in the midst of it stands the shaft of an ancient granite column about three feet in diameter and twelve feet high, with a barbarous base and capital, which appear to have been added by the Venetians when they fixed upon the top of it a figure of the Lion of St. Mark, the usual symbol of the Venetian Republic, and which the Turks of the Morea call "the sacred dog." On one side of it I distinguish the following characters: COL CCCCLXIII HLICER NI LGO SUPER; and on the opposite side: R ORI FRANCISCI BR I I OSPICIT ALTA MARIS. The date appears to have been 1493, and the last words of the inscription "prospicit alta maris" (facing the high sea). The lion, however, did not keep a good look-out, for Methoni was taken from the Venetians by Sultan Bayazid the Second, only six years afterwards. Leake
The Venetians placed a (lost) statue portraying the Lion of St. Mark on a granite column they found in a shipwreck near Cerigo: according to a barely visible inscription it was placed there in 1493; other symbols of the Republic were placed on public buildings and on the walls: some of them are still where the Venetians placed them, others were relocated by the Ottomans when they modified parts of the fortress.

Methoni is situated on the extreme point of a rock ridge, which stretches southward along the coast from the foot of Mount St. Nicholas. Off the outer end of the town is the little insulated rock, which Pausanias calls Mothon, and which he describes as forming at once a narrow entrance and a shelter to the harbour of his time: it is now occupied by a tower and lantern, which is connected by a bridge with the fortification of Methoni. A mole branches from it, which runs parallel to the eastern wall of the town, and forms a harhour for small vessels. It seems to be exactly in the position of the ancient port, the entrance into which was probably where the bridge now stands. Leake
The Venetians fortified with a large tower (Castel da Mar) the access from the sea and built a second tower on a rock immediately outside it: (this is named with the Turkish word Bourtzi).

(left) Turkish tower (Bourtzi) built in the XVIth century to control the access to the harbour; (right) coat of arms of the Foscolo family in the lower part of the Sea Gate

Standing upon a promontory open to a great expanse of sea in the direction of the prevailing breezes, Mothoni enjoys a temperate and salubrious climate, though I doubt not, it is often exposed to furious gales in winter, and even in summer may have sometimes too much breezes. Leake
The sea castle and the tower on the islet were strengthened during the Ottoman period and a stone with the coat of arms of the Venetian governor ended up at the foot of the Sea Gate wall.
During the second Venetian occupation (1686-1714) a new large bastion (Bastione Loredan) was completed and a 1714 inscription celebrated the event: notwithstanding this a few months later the garrison surrendered without fighting.