This was formerly a Province called Sittia; the head City had the same name, standing in a Bay, at the North East part of the Island, at the West side extending from the North, to the bottom of the Bay Southerly, above a mile in length.
Bernard Randolph, b. 1643. The present state of the islands in the archipelago.
Sittia, on the northern coast of Crete, was the last port of call on the eastward journey towards Rhodes, Cyprus, Syria and Lebanon.

The Castle stood on a rising ground to the N Wt. of the Town, built of a coarse Marble stone. Randolph
The inhabitants of Sittia were protected by a small fortress on the top of the hill from which low walls reached the sea where another wall on the shoreline completed the defence system. Sittia was known for its sultana and until the end of the 1930s could only be reached by sea. The journey by land from Agios Nicolaos via a mule-track required more than 12 hours. Today it is, similar to many other locations of the island, a booming tourist resort. The fortress and in part the maritime walls are still there, while the walls which linked the two are lost.

The outer walls of the Kazarma (barracks)

(In 1651) The Venetians finding the place was not Tenable, caused several mines to be made, by which they destroy'd the Castle and Town, and so went to Candia. Randolph
July 1795. In the time of the Venetians this was a considerable place; there are now only a few warehouses on the quay, the whole town having been destroyed by an earthquake. (..) The country here is really pretty: an uneven and narrow valley is shut in on every side but where it opens to the sea by bold hills, whose outlook is fine, and which only want a little more wood.
The letters of John B.S. Morritt of Rokeby descriptive of journeys in Europe and Asia Minor in the years 1794-1796.
The fortress is called Kasarma after the Italian caserma (barracks) and it shows signs of the Ottoman reconstruction in the shape of the look-out turret above the entrance (which is shown also in the image used as background for this page).

By the ruins it may be seen the builders had no thoughts, so soon to have left them; most of the Walls are intire and some have lower rooms with beams, which are patcht up, and serve for store houses to put corn in, when any ship comes to lade. In the year 1680 I was here. Randolph
The keep inside the fortress was the last defence in case the enemy had managed to get inside the walls. Most likely it was strengthened by a tower. Sittia was abandoned for a very long time. 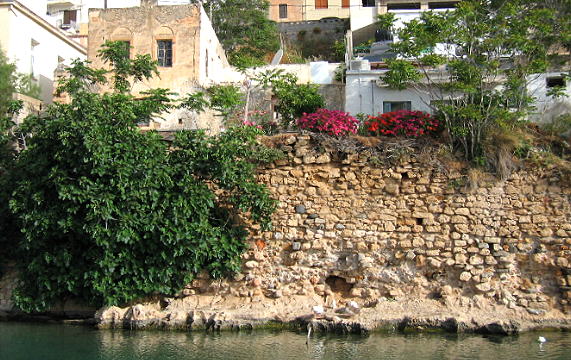 Evidence of the maritime walls 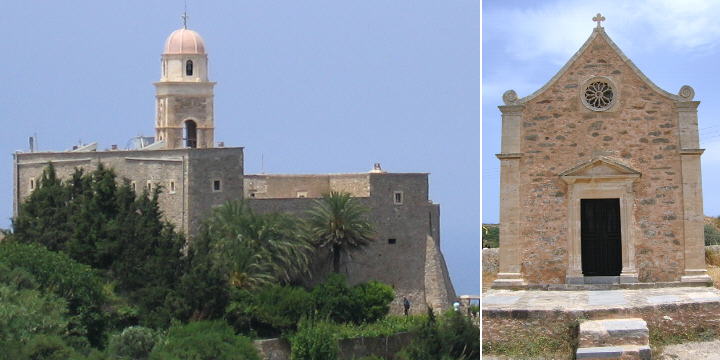 Cape Sidero, which is the farthest point to the north east, must be the promontory which was anciently called Zephyrium; to the south east of it we saw a head of land called Salamoni; this is the cape, over against which saint Paul sailed in his voyage to Italy.
Richard Pococke - A Description of the East and Some Other Countries - 1745.
After the fall of Cyprus in 1571, the last bell tower seamen saw on their journey to the Eastern Mediterranean, was that of the monastery of Panagia Akrotiriani (Our Lady of the Cape), located near Cape Sidera. The monastery has the features of a fortress: because of its isolation it was the target of corsair raids and the Venetians promoted its fortification. This explains the current name of the monastery, Moni Toplou, where Top means cannon in Turkish, because the Venetians authorized the monks to have a cannon to defend themselves. 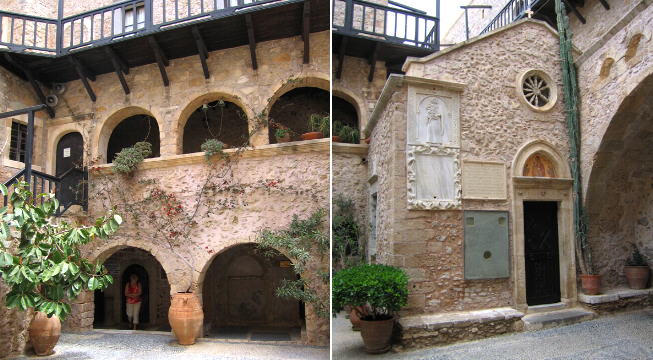 Eastward of Sittia on a point of land, is a Monastery dedicated to St Isidoro to which belongs a great Revenue, it maintains about 40 Calojeros. There are several rich Lamps, and other ornaments of Silver and Gold. Here they shew you the Picture of the Blessed Virgin, which (they say) was brought by Angels from Stancoi (Kos), and was found in a cave of that Mountain. Randolph
We landed about twenty miles below the harbour of Setia, on a promontory to which the wind drove us. We began our tour of Crete then by a walk of about ten miles, with a sun fit to broil us. We stopped at the first habitation we found, where we arrived late. It was a Greek monastery, and pretty comfortable, but the whole country on this long promontory is exactly like our moors hilly, stony, and covered with heath and wild thyme. They had a pretty little garden, where we passed the next day. (..) We got mules and rode about ten miles more to Setia, where our boat and people were at last arrived. Morritt
According to tradition the monastery was built after some local farmers in the XVth century found an icon of the Virgin Mary in a cave. There had earlier been another monastery to Agios Isidoros, which the Latin monk Buondelmonte visited in 1415 during his journey to Crete. The monastery retains most of its XVIIth century Venetian features and the church has some fine paintings by Ioannis Kornaros, a Cretan painter with a Venetian surname (you may wish to see Cappella Cornaro in Rome), who craftily combined Italian design with Byzantine spirituality.

The very short eastern coast of Crete was and is almost unpopulated. The only fortress built by the Venetians to protect communication between the northern and the southern parts of the island was located on the flat top of a promontory protecting a bay. Its remaining scanty stones are the reign of goats, as the Ottomans had no interest in maintaining the Venetian fortress: with the conquest of the island the Eastern Mediterranean Sea had become an Ottoman lake. Earthquakes and strong winds have almost entirely cancelled Paleocastro (old fortress), although its name still survives in that of a nearby village.