- Santorino (Thira)
(detail of a 1651 engraving by Marco Boschini)

Santorino (or Sant'Irinni) owes its Venetian name to a church dedicated to St. Irene: of its other names Strongyle (the circular one) is perhaps the most appropriate one, because it describes the shape of the group of islands which were left at the end of one of the largest volcanic eruptions known in history (see below at the end of the page). Santorino, the major of these islands has the shape of a crescent.
The caldera of Santorino (the sort of lagoon at the centre of the islands) with its deep waters was an excellent natural harbour and the Venetians built Skaro, a small fortified town, at the tip of a cape from which they were able to control both the southern and the northern entrances to the caldera.

Cape Skaros, the site of the old town seen from the sea

In the XVIIIth century in line with what happened on many other islands, the inhabitants of Skaro felt they did not need any longer to live in a location which was chosen for defensive reasons, but was difficult to reach and to live in and they gradually moved to a village which was still on the edge of the caldera, but in a more convenient position. The buildings of the old town gradually crumbled and the earthquakes (a very severe one hit the island in 1956) completed the destruction of Skaro. 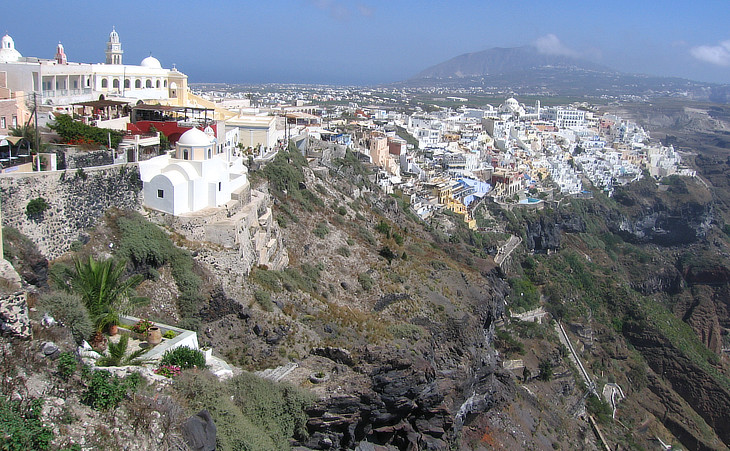 View of Thira and of the caldera

On many Cycladic islands, even after the fall of the Dukes of Nasso, the families of (very remote) Venetian origin retained a prominent role in the local communities: when the inhabitants of Skaro moved to Thira, their new town (a village previously known as Pyrgos due to an existing tower), the Catholic families settled on higher ground: this is still visible in today's Thira: the Catholic quarter with several churches and monasteries (on the left in the photo shown above) is clearly distinct from the Orthodox one built around a very large church.

Ghisi house and relief portraying St. Catherine of the Wheel at the entrance of the Dominican nunnery

Very few buildings did not collapse during the 1956 earthquake: as it often happens some of the oldest houses held fast while more recent constructions fell apart. The tower/mansion of the Ghisi family (also spelled as Chigi or Ghigi) is the largest surviving building of Thira.

Vincent Clarence Scott O'Connor, who had a career in the Indian Civil Service, travelled extensively in the Cyclades in 1929: in his book Isles of the Aegean (published by Hutchinson) he described his meetings with families of Venetian descent living on Santorino:

Emporio: views of the fortified village

Emporio is a village located on the southern part of the island at a certain distance from the sea. The houses of its older section were built one next to the other with only two small gates leading to the village main church. Although Emporio has now expanded in all directions, from a nearby hill it is still possible to figure out its old fortified appearance.

Santorino is the southernmost island of the Cyclades: when the Ottomans acquired it Venice still retained Candia which is located some 60 miles south of Santorino; the new rulers built a large tower on a hill near Emporio in order to detect the arrival of a Venetian fleet early: the Ottomans hoped to check the enemy's attempts to land. However, during the 1645-69 War of Candia, the Venetians for many years had such supremacy at sea that the tower was useless. Santorino and the other islands paid Venice the tribute (a periodic payment made as a sign of dependence) which they were supposed to pay to the Sultan. Also during the war for the possession of Morea (1685-99) the Venetians were able to challenge the Ottoman rule over the Cyclades: only at the Peace of Carlowitz did Venice agree to give up her rights to these islands (with the exclusion of Tine). 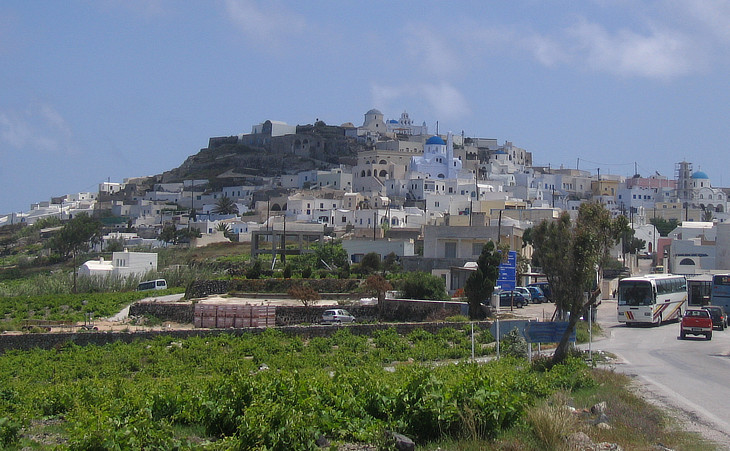 Pyrgos means tower: in the case of this village, it would have been more appropriate to use the word Kasteli (castle), which the locals reserve for the buildings inside an enclosure at the top of the hill.

Pyrgos: (left to right) entrance to the castle; house above the entrance; a fragment of an ancient statue

Very few people live inside the castle, notwithstanding the fine views it offers over the whole island. Old maps identified this village in a very Venetian way: San Salvador (in Italian it would have been Salvatore), probably with reference to the name of a church. The village is located at the very northern tip of the island and the photo of the caldera is taken from here (it includes a blue dome in the foreground (it opens in another window).

The site of Akrotiri is located in the SW of the island of Thera, above a sheltered S facing bay and with a view to Crete, ca. 110 km to the S. The Bronze Age settlement (over 10,000 sq m) was at the zenith of its development when it was completely buried by ash and pumice following a volcanic eruption (dated at ca. 1500 B.C.) that has been estimated as 4 times as powerful as the Krakatoa eruption of 1883 A.D. The extensive architectural remains and well preserved wall paintings have led to a comparison with Roman Pompeii. The destruction may have given rise to the Atlantis myth.
Perseus Digital Library The earliest evidence for settlement at Akrotiri dates to the Early Bronze Age II and III periods. The pottery and artifacts of this phase show connections to the N Aegean islands. In the Middle Bronze Age the size of the settlement expands and artifacts now show closer connections with Mainland Greece (see some vases found at Argos). The 1st Minoan influence is also seen at the site in this period. The transition from Middle Bronze Age to Late Bronze Age passes with no cultural break, but was marred by an earthquake (at ca. 1550 B.C.) which caused great damage to the settlement. The inhabitants apparently rebuilt their city immediately and in an even more luxurious and larger scale. Perseus 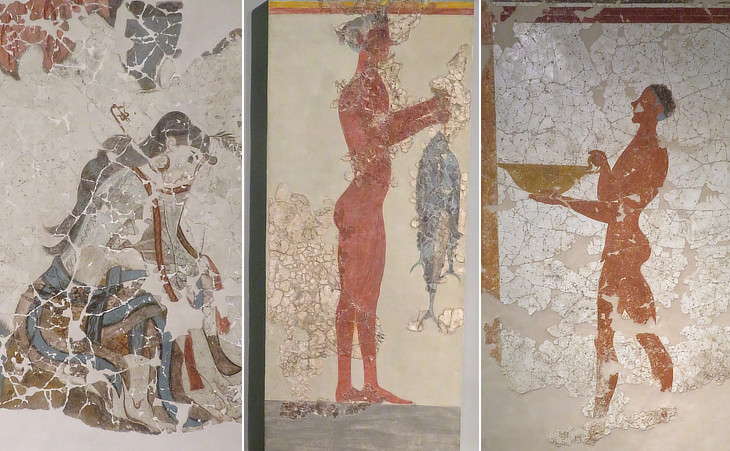 Frescoes from Akrotiri (largely integrated with modern painting, similar to what was done at Knossos)

The size of the Late Bronze Age I settlement is estimated to have been several thousand inhabitants. The wealth and size of the city, with paved streets, city sewer system, and 2 and 3 story private houses with magnificent wall paintings, indoor toilets and rich furnishings certainly equalled or surpassed the level of culture and wealth on Minoan Crete. The settlement at Akrotiri probably gained this high degree of wealth and culture through its foreign contacts and its position in the center of the Aegean trade networks. Perseus

Fresco from Akrotiri most likely depicting a Nilotic landscape

At ca. 1500 B.C. earthquake tremors again caused damage to the city. There is evidence that immediately afterwards the inhabitants began again to clean up debris and repair the damage. Before the repairs were completed, however, the inhabitants were forewarned (possibly from gas or smoke from the volcano) of the coming eruption (no human remains or valuables have been found during the excavations). The eruption buried Akrotiri under 5 m of ash and pumice. At least 200 years passed before the island of Thera was again inhabited, and there is no evidence for a settlement on the island again until the Archaic period. Exploration began in 1845 and systematic excavations were carried out 1895-1903, then resumed after WWII. Perseus 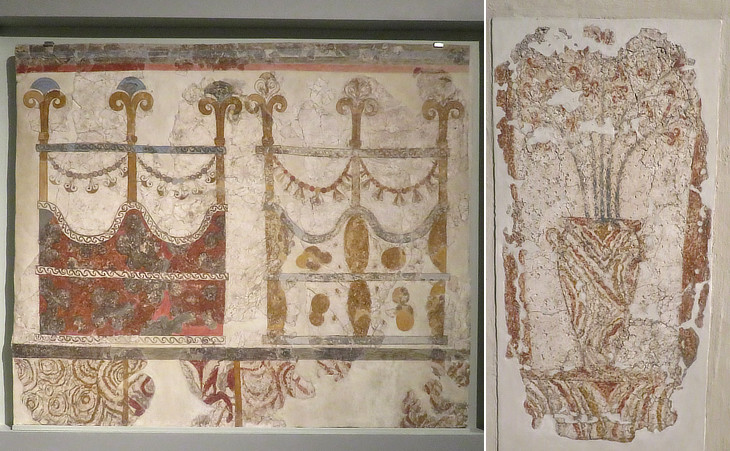 The photos were taken at the exhibition Pompeii and Santorini at Scuderie del Quirinale in Rome in December 2019.