XVIIIth century travellers were fascinated by the ruins of the ancient temples they found in a few Greek locations (today excavations have by far enlarged the number of Ancient Greece monuments), but the surviving portal of a never completed temple in Naxos, had (and has) a unique evocative power.

The temple was built in the VIth century BC and dedicated to Apollo (this is assumed because the temple is oriented towards the island of Delos, site of a famous sanctuary dedicated to this god) or to Dionysus who met in Naxos lovely Ariadne whom Theseus had deserted, and married her without delay. The temple was never completed and over time its columns and walls were removed and used as building material for the houses and the fortifications of Naxos. The three blocks of marble of the portal however were spared and they still provide a frame for the views of Naxos. 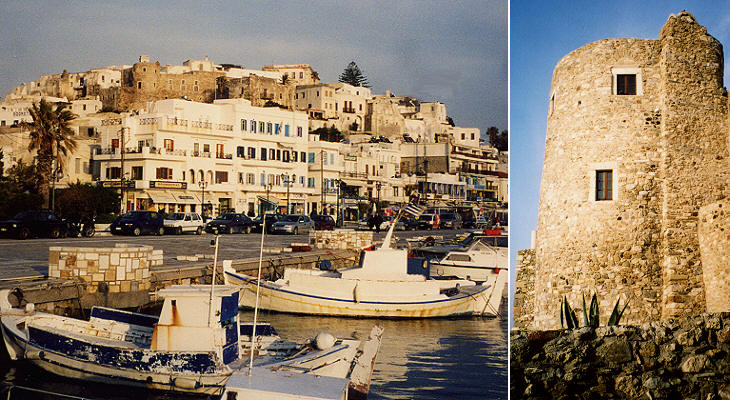 View of Nasso and the Crispo Castle

The fortifications of Nasso are not a castle with towers and merlons, but a group of fortified mansions arranged in a way that they controlled the access to the top of the hill, where Marco Sanudo built his own fortified residence (which had a tall tower, now almost totally ruined). The only remaining fortified mansion belonged to the Crispo family who took over from the Sanudo the title of Dukes of Nasso (or Dukes of the Archipelago as they ruled over a number of islands, including Milo). 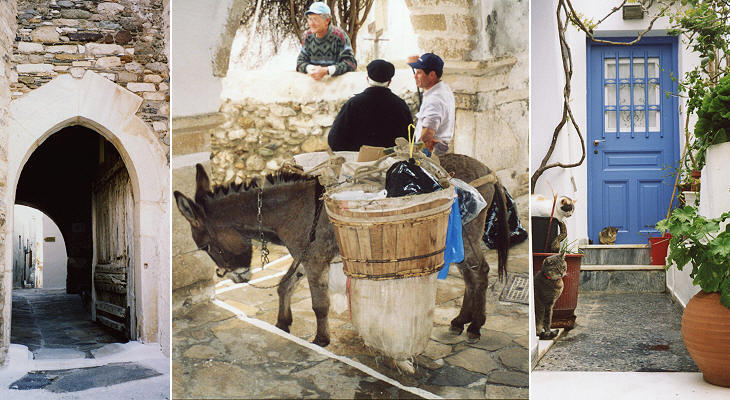 In the streets of Kastro

The top of the hill is still called Kastro and there are only three narrow gates to access it. The garbage collection still requires donkeys and the cats of Kastro do not run the risk of being run over by a car. The heirs of the Venetian families lived in Kastro, where they built a Catholic Cathedral, while the wealthiest Orthodox families lived immediately outside Kastro in a quarter called Borgo (the Italian word for borough). When in 1566 the Turks put an end to the Duchy of the Archipelago, they did not actually put an end to the supremacy of the families of Venetian descent. The only thing they were interested in was collecting a yearly amount (called tributo or harach in Turkish) and an island run by a limited group of landlords was reliable from this point of view. Civil and ecclesiastical coats of arms

This explains why Kastro shows evidence of Catholic churches and monasteries built during the Turkish domination. The relief at the top of the image shows the coat of arms of the Crispo, the last dukes, but the coats or arms below it (including the Jesuits' symbol) are all related to the following period. In general during the Turkish rule all the Cycladic islands had a rather autonomous government and enjoyed a degree of religious freedom. 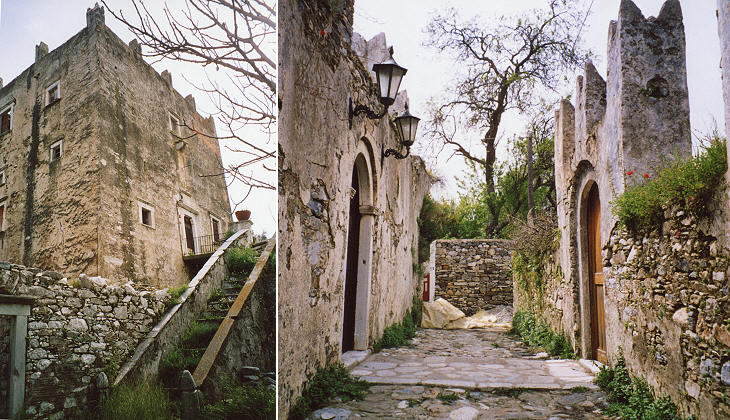 Marco Sanudo introduced in Naxos a feudal system: the island was split into fiefdoms, which were assigned to Sanudo's partners. This partition of the island lasted for many centuries. The family running a village lived in a fortified mansion. Chalki, the early medieval capital of Nasso at the foot of Apano Castro (the site of a now lost fortress) was run by two families and low walls marked the boundaries of their fiefdoms. 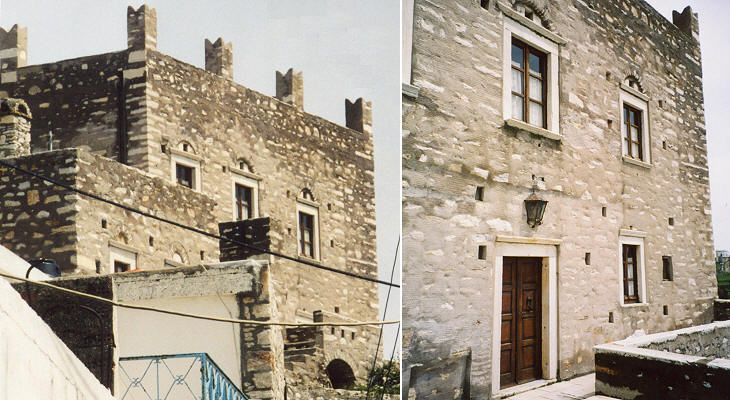 Many of the fortified mansions (often called towers) in the interior of the island still host the local most prominent families. The Bellonia Tower (image below), a few miles off the main town, is now a charming residence. It still has a twin chapel for both Catholic and Orthodox functions. These twin chapels were built on many islands in an attempt to promote better relationships between the religious communities. In 1582 however this effort was frustrated by the Reform of the Calendar introduced by Pope Gregory XIII: the Orthodox Church did not endorse the reform and thus the main religious festivities were celebrated by Roman Catholics and Orthodox on different days, thus adding another cause to the existing frictions between the two communities. 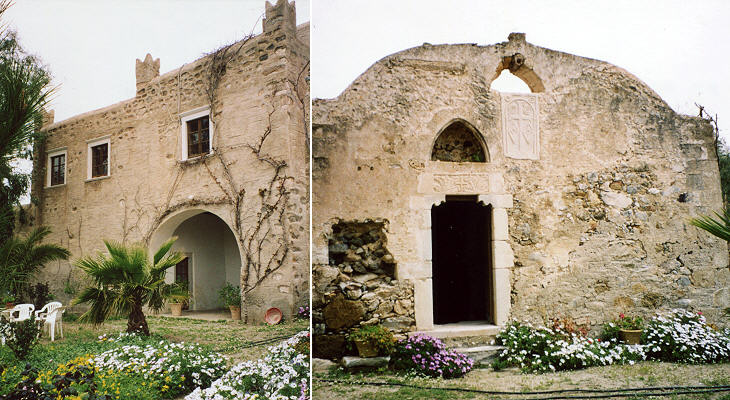 Bellonia Tower and its chapels