- Cerigo (Kythira)
(detail of a 1651 engraving by Marco Boschini)

Cerigo was called anciently Cithaera; famous for being the Native Country of Venus and Helena: So that were we to frame an Idea of this place from the fame of these Beauties, we might imagine it one of the most charming places of the World. But, on the contrary, the greatest part of it is a barren, rocky, and Mountainous Soil, ill peopled, and can brag of no plenty, neither of Corn, Wine, nor Oyl: which undoubtedly made Venus change her own Country for Cyprus; and Helena so willing to be stollen and carried into the pleasant Plains of the Continent. What Beauties it now produceth, I am ignorant of; for I remember not that I saw a Woman there.
A journey into Greece by George Wheler, Esq., in company of Dr. Spon of Lyons - 1682 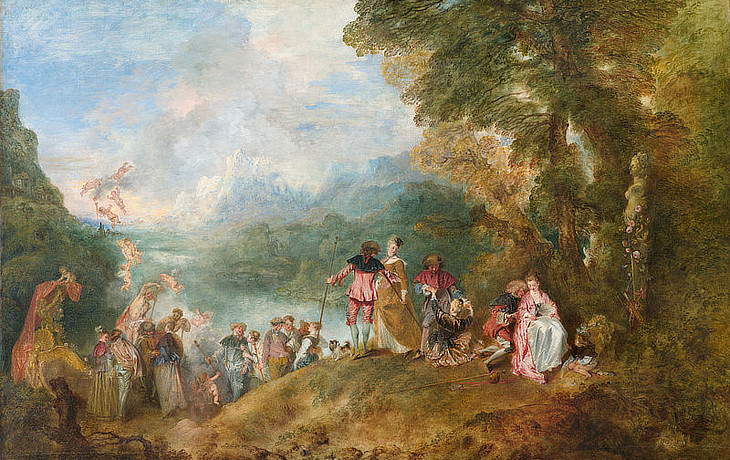 Louvre Museum - Antoine Watteau - Pélèrinage a Chytère - 1717; the image used as background for this page shows the Birth of Venus by Sandro Botticelli in the Uffizi Gallery of Florence

Cithera, the ancient name of the island is linked to the births of Venus and of Helen of Troy. It is mentioned in the title of the painting which gained Antoine Watteau admission to the French Academy. 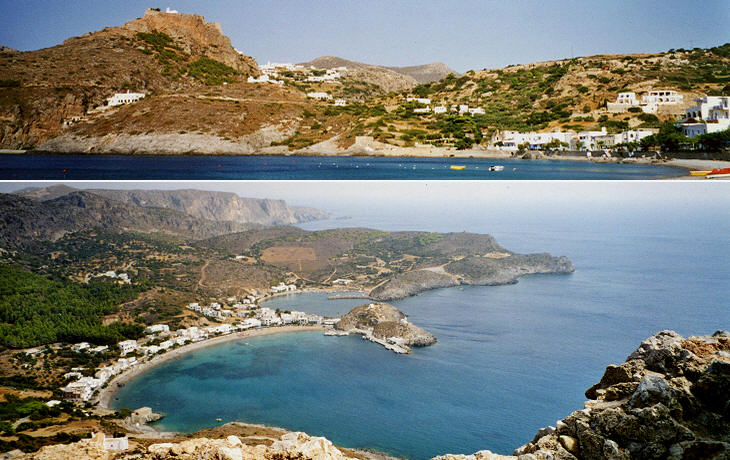 The chief Town and Fort lieth on the South-side of the Island, strong only towards the Sea; on which it looketh from a Precipice. Under it is a Harbour, but open to the Southerly Winds. Upon our entry into the Port, whether by neglect, or unskilfulness of our Captain, we ran foul of another Ship of our company; and if we did not endanger, did at least considerable damage to both. From the Fort also is to be seen Cerigotto, another little Island, inhabited only by Wild Goats. It belonged to Colonel Macarioti, who served in Candia, before it was taken. He is reported to have behaved himself at that Siege very gallantly. He made us taste of very good Wine of Cerigo, where he now liveth. From Cerigo, in clear and fair weather, Candia may be seen beyond Cerigotto. Wheler
Sept. 30. 1809. We anchor this evening at Kapsali, in Cerigo, after having encountered off the Taenarium promontory some stormy weather, which threatened to send us to the coast of Africa. (..) The situation of the modern town of Cerigo so much resembles that of the generality of ancient sites in the islands of the Aegean, and the harbour although not good with reference to ancient navigation, was so important by its position on the line of maritime communication between the eastern and western coasts of Greece, that one cannot but presume that the modern site was occupied by some ancient town or fortress; but there is some difficulty as to the name.
William Martin Leake - Travels in northern Greece - 1835
Cerigo is located between the Peloponnese and Crete. Together with the island of Cerigotto (Antikythira) it allowed control over the ships moving between the Ionian and the Aegean Sea.

The obscurity of the history of Greece during the middle ages, renders it impossible to trace the modern appellation of this island to its origin. It is almost the only instance of a Sclavonic name in the Greek islands. Tzerigo was perhaps a Servian chieftain, who obtained possession of Cytera. Leake
The military importance of the island for the Venetians grew after 1500 when they lost the fortresses of Modon and Corone in the Peloponnese from which they controlled the maritime route to the Levant. Cerigo did not offer a good harbour, however it proved useful to the ships in providing a safe haven in case of bad weather or attack by the corsairs. As they did in many other locations the Venetians built their fortress exploiting a natural rock. It was not large enough to accommodate all the population of Cerigo so walls and towers were built to protect the adjoining part of the town. 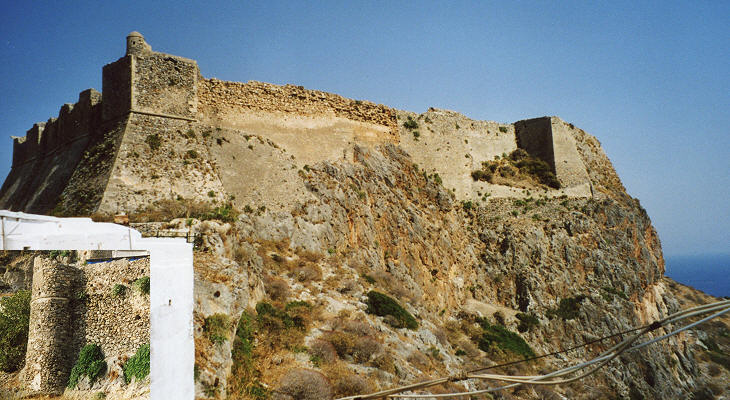 The fortress and the walls protecting the town of Cerigo; (inset) a tower

The town of Cerigo stands on a narrow ridge 500 yards in length, terminating at the south-eastern end in a precipitous rock, crowned with a castle which is accessible only on the side towards the town, by a steep and winding path, but is commanded by a conical height at the opposite end of the ridge. Leake
In 1718 Venice signed the Peace of Passarowitz by which it formally ceded the Peloponnese (aka Morea), Tino and three small fortresses along the coast of Crete in return for new territories in Dalmatia. Cerigo became its easternmost possession from which it could monitor the moves of the Ottoman fleet. 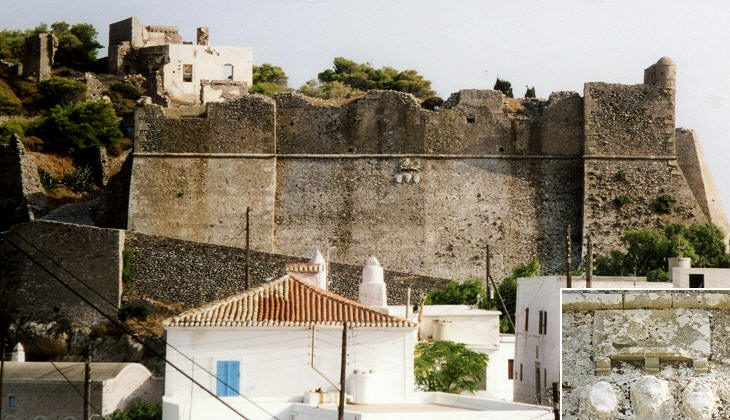 Entrance to the fortress: (inset) evidence of the Venetian insignia

This Island is still under the Dominion of the Venetians, who send a Proveditor thither. Wheler
The town is enfiladed by a battery of three guns in the castle, which was erected or repaired by the French when they took possession of the Venetian Islands. The garrison of Cerigo now consists only of two Russian officers with one company, and a few Albanians, chiefly Suliotes. Leake
The entrance to the fortress as usual was embellished with the winged lion and the coats of arms of the Venetian governors. Traces of these emblems are still visible. Cerigo was under Venetian rule until 1797, when the Most Serene Republic collapsed. It was part of the Ionian Islands (today it is part of the Athens region) and it followed the destiny of these islands by becoming French, Ottoman-Russian, French again and British before being reunited with Greece. 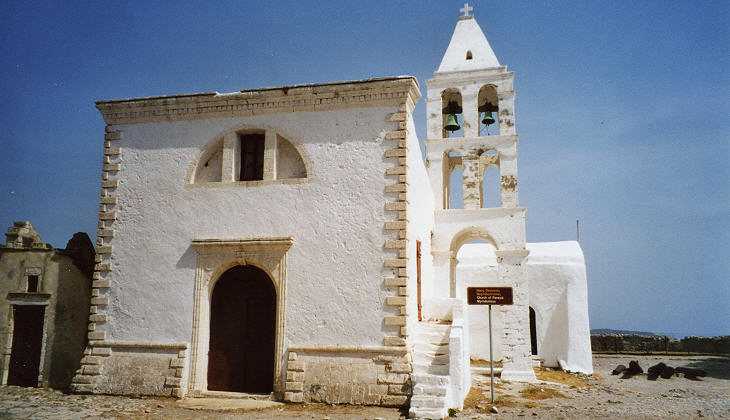 The Cathedral of Cerigo inside the fortress

Cerigo, contains about 50 villages and 7000 inhabitants: in the town there are scarcely 1000. Heraclides Ponticus (a IVth century BC Greek philosopher) describes the people of Cythera as laborious, and lovers of money, and the island as productive, particularly in honey and wine. The character of the people is the necessary consequence of the rocky soil on which they dwell. Although the productions, like those of some others of the dryest islands, (..) are good in their kinds, their quantity, with the exception of honey and wine, is seldom more than sufficient for the consumption of the inhabitants. There is nothing, therefore, to attract commerce to Cerigo. Leake
Unlike other Ionian Islands which flourished under the British rule, e.g. Corfu, Cerigo did not and even today it is almost unpopulated. The main buildings of the town were located inside the fortress: most of them have collapsed or are in very poor shape. Only the Cathedral (today Orthodox) is still in good condition. It has been whitewashed, but its architecture shows its Venetian design. 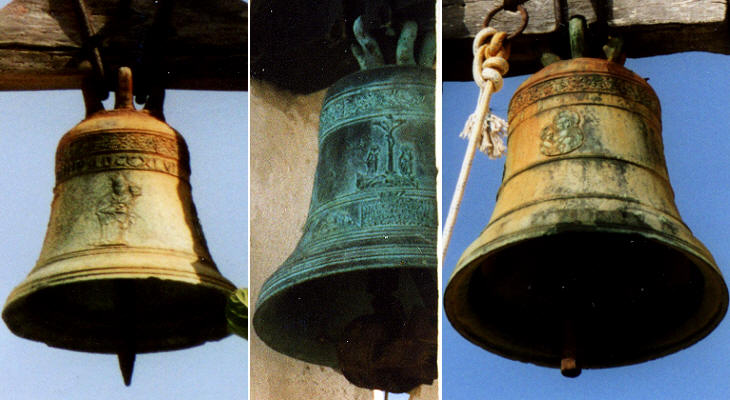 During the Venetian rule the most prominent families of Cerigo built their own little chapels, mainly below the fortress. Their bells were made in Venice.

Move to page two to see the minor fortifications of Cerigo.