You may wish to see this page in conjunction with a small section covering some monuments of Athens during the Roman rule. 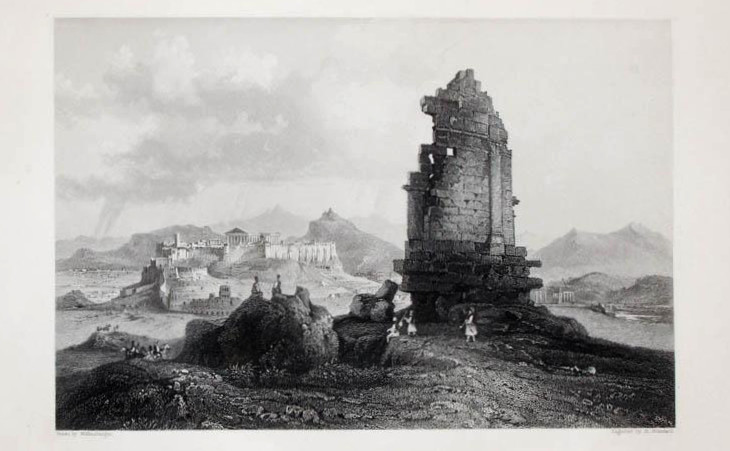 The Cittadel that now is, was at first all the City. (..) Afterwards, in times of its greatest Prosperity, it was no more than the Castle, or Acropolis, standing in the middle of the City. And still it continueth to be the Castle, even in this low Estate; though it cannot, at present, be said to stand in the middle of it; but rather somewhat above it to the South-West (..) So that the present Town lieth not round about the Castle, as antiently, but to the North-West side of it; being now spread on the Plain under it. (..) It hath no Walls to defend it self.(..) From the Sea, the Castle is only perceivable; which hideth all the rest of the Town, spread out upon the Plain. (..) I esteem this Castle of no great Strength for these Times; and that by reason of the Hill Musaeum, which lieth South-West of it, of equal height with it, and being within Cannon-shot.
A journey into Greece by George Wheler, Esq., in company of Dr. Spon of Lyons - 1682. Wheler visited Athens in 1678 thus before the 1687 siege of the city.
The Venetians approached Athens from the south and positioned most of their artillery on the hill of the Muses from which they could hit the Acropolis, which had the appearance of a medieval fortress with the notable exception of the Parthenon. The early XIXth century print is likely a faithful representation of the scene in 1687. At that time the inhabitants of Athens lived at the foot of the northern side of the Acropolis. 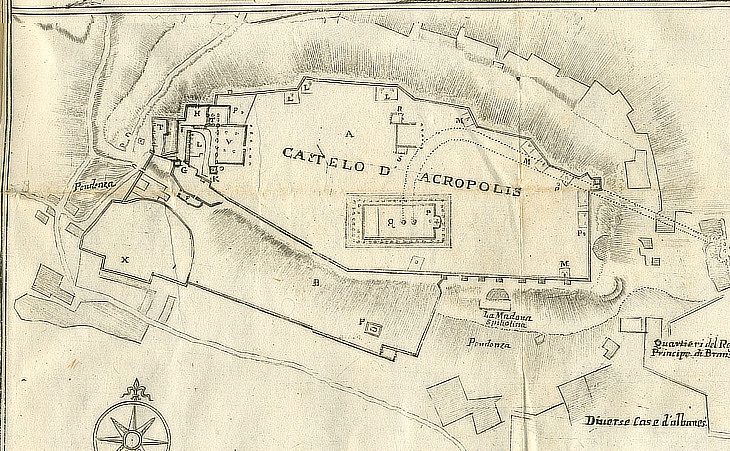 The Acropolis, or Castle, is built upon a long Rock, with Precipices every way from it, except on the North-West end; where you mount by a steep Ascent, to the Entrance; and which is better fortified than the rest, by high and thick Walls. The whole Rock, which is Oval, is about Twelve hundred ordinary Paces in circumference, and also surrounded with Walls of very antient Work, especially the Foundations of it, making an Area twice as long as broad. Wheler
In the short period of the Venetian occupation a topographer drew a map of the Acropolis (Castelo d'Acropolis); it shows that the Odeon of Herodes Atticus (x) was included in the fortifications whereas the site of the Theatre of Dionysus was outside them: a small church (Madona Spiliotina) was built in its upper section and beneath it there was a slope (pendenza). 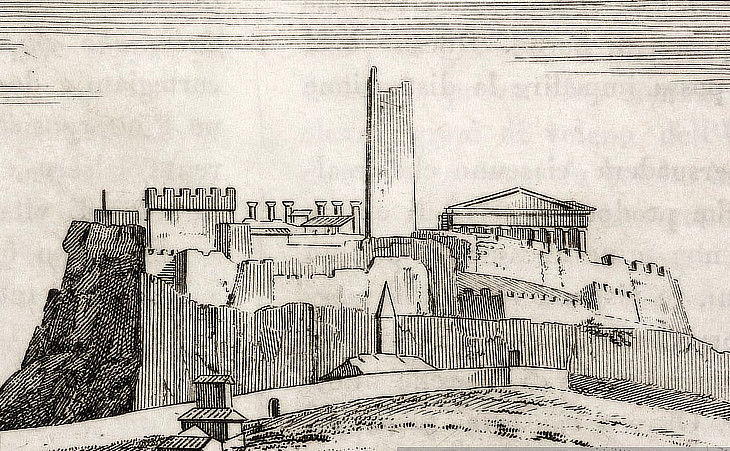 It was with great difficulty, we obtain'd the Favour of seeing the Castle; (..) The Haga hath for his Garrison about an hundred Turks of the Country, who reside there with their Families; and are always on their Guard, for fear of Pirats, who often land there, and do a great deal of Mischief. Wherefore all Night, a part of them by turns, go the Rounds of the Walls, making a great hallowing and noise, to signifie their Watchfulness, and that if Pirats, or other Enemies come, they are ready to receive them. These Soldiers are called Neferides in Turkish, and Castriani in Greek; not Janizaries. (..) We went up to the Castle from the Town, mounting by degrees, and winding about it, till we came at the Entrance, which is at the North-West end of the Rock. (..) Thence mounting a little further, through a narrow Court, with a Covert on the side of it for the Guards, we came to the second Gate. (..) When we had passed the Second Gate, we observed some antient Foundations; which we guessed, might be of the Propylaea, or Outward Gate: which was so glorious a Structure, that it's said to have cost a Million of Drachma's to build it. (..) They have built a Minoret, or tall, slender Steeple; out of which they make a Noise, to call People together, at their set times of Prayer, day and night: On the top of which I mounted, and had a most pleasing Prospect of the Cittadel, City, Plain, and Gulph of Egina, with the Coasts, and Harbours round about. Wheler
The Acropolis could only be accessed from the west through the Propylaea, the imposing entrance built in the Vth century BC. Its two wings were turned into palaces for the Ottoman officers. The fortress of the Acropolis was meant to withstand attacks from pirates (and the Knights of Malta), but the Ottoman government did not expect a veritable army to lay siege to it, especially after the conquest of Crete in 1669. Yet the backlash of the failed Ottoman siege of Vienna in 1683 led the Venetians to attack and conquer Morea (Peloponnese) and then to lay siege to Athens. 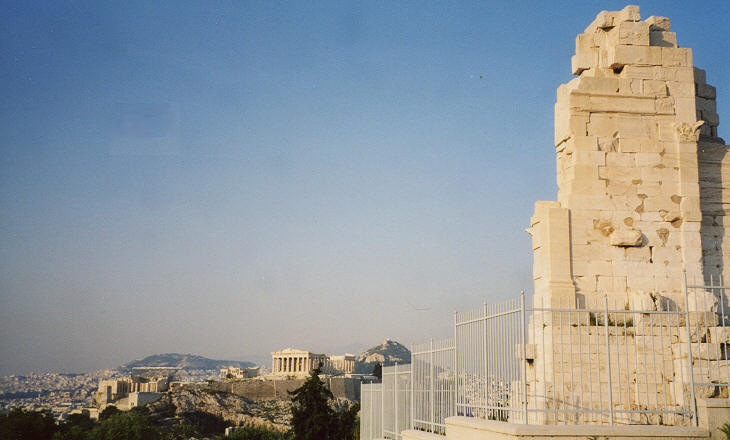 The Acropolis seen from the Monument to Philopappus

The Venetian conquest of Athens would be a very minor event in world history if it had not caused great damage to the Parthenon. Francesco Morosini, the Venetian Commander was given the title of Peloponnesiacus by the Senate for his swift victories in Morea, a type of recognition the Romans had given to very few commanders (Britannicus, Germanicus, etc..). Certainly Morosini passed away in 1694 in the belief he would be remembered as a great commander. As a matter of fact today's encyclopaedias devote a line to his military records which include his gallant defense of Candia and a paragraph to the fact that the Venetian artillery hit the Parthenon causing the collapse of its central part. 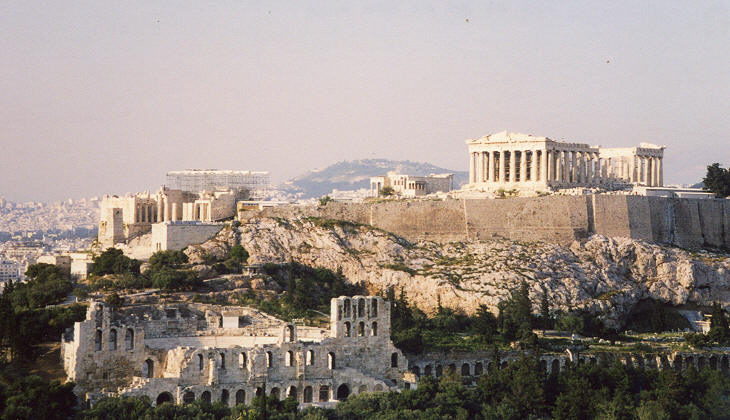 Thence, through another small Court, the way brought us to the Third Gate; over which was a Basso-relievo of an Eagle, the Ensign of the Roman Sovereignty: the Goodness of whose Work shews it to be antient. After we had passed this Gate, we were quite within the Acropolis. A noble Edifice of white Marble hath the Reputation to have been the Armory of Lycurgus; and, they say, was used for an Armory many Years together, both by the Christians, and Turks: until about twenty Years ago, it was blown up by Gun-powder kept in it. Wheler
In the XIXth century the Acropolis was the object of a vast campaign of archaeological excavations. Their aim was to bring back the Acropolis to its assumed Vth century BC status. Additions of the Roman, Byzantine, Frankish and Ottoman periods were often regarded as not being of any interest and were demolished. Maybe today this aim would be achieved by using a more sophisticated technique (the image used as a background for this page shows an Ottoman relief in the rubble of the Acropolis). 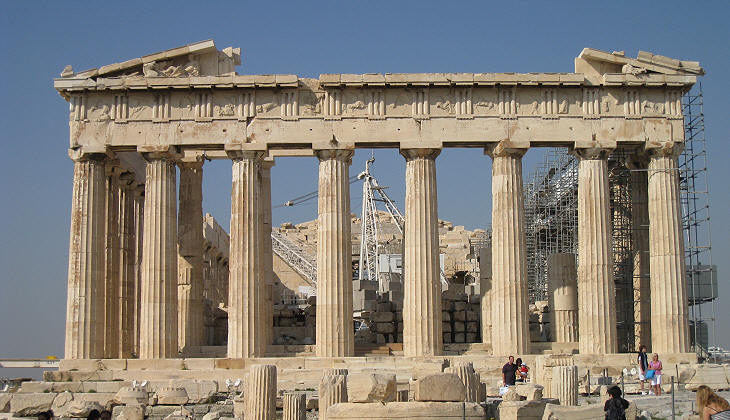 Eastern front of the Parthenon

We were so impatient to go to the Temple of Minerva, the chief Goddess of the Athenians (see a statue of Athena Parthenos in Italy); which is not only still the chief Ornament of the Cittadel; but absolutely, both for Matter and Art, the most beautiful piece of Antiquity remaining in the World. (..) It is situated about the middle of the Cittadel, and consists altogether of admirable white Marble. The Plane of it is above twice as long, as it is broad; (..) It hath an Ascent, every way, of five Degrees, or Steps; which seem to be so contrived, to serve as a Basis to the Portico; which is supported by chanelled Pillars of the Dorick Order, erected round upon them, without any other Basis. These Pillars are Forty six in number, being eight to the Front, and as many behind, and seventeen on each side, counting the four corner ones twice over, to be deducted. They are Forty two foot high, and seventeen foot and a half about. The Distance between Pillar and Pillar, is seven foot, and four inches. (..) We observed in place of one of the Pillars, a great pile of Stone, and Lime, of most rude work; which they told us, the Kizlar-Haga had ordered to be so done, to help to support the Roof; because he could never find a Stone big enough to supply the place of the old Pillar, broken down. Wheler
We went to the famous temple of Minerva called Parthenon which was built under Pericles. (..) It was miserably shattered in the late Venetian wars; for the powder being kept in it, a bomb of the Venetians happened to fall in by the hole, which was in the middle of the arch, to give light within which blew up the temple; so that only the west end remains entire, and the pillars and pediment of the east end.
Richard Pococke - A Description of the East and Some Other Countries - 1745.
The Venetians had little interest in targeting the Parthenon, because they were aiming at damaging the fortifications at the entrance to the Acropolis. At that time guns threw metal or stone balls, which were not able to cause any major damage to the solid columns of the Parthenon. The columns of the eastern front show the impact of these balls (their left side is more damaged than the right one). 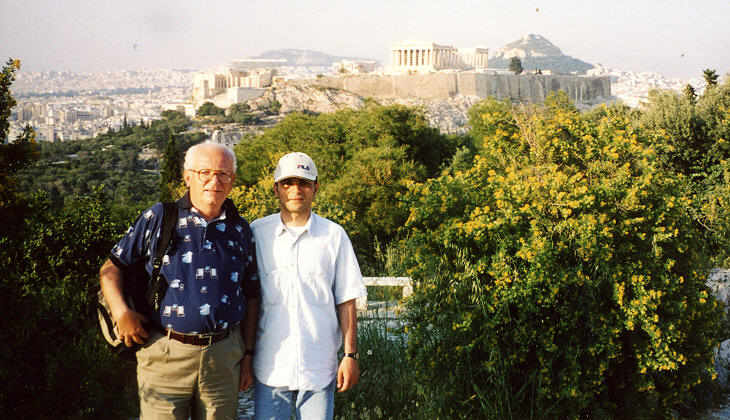 We'll never do it again!

This Portico beareth up a Front, and Frize round about the Temple, charged with Historical Figures of admirable Beauty and Work. The Figures of the Front, which the Antients called the Eagle, appear, though from that height, of the natural bigness; being in entire Relievo, and wonderfully well carved. Pausanias saith no more of them, than that they concern the Birth of the Goddess Minerva. Wheler
In addition to the damage caused by the blast, the front was deprived of some of its statues by a Venetian attempt to remove them; the operation was not properly executed and the statues crashed to the ground.
When (in 2003) I was taking some of the pictures you see in this page I noticed three tourists who were speaking Turkish and we arranged to take this picture, where on behalf of our Italian and Turkish ancestors, we formally acknowledge our wrongdoings and apologize for them.

Sitting at a cafè 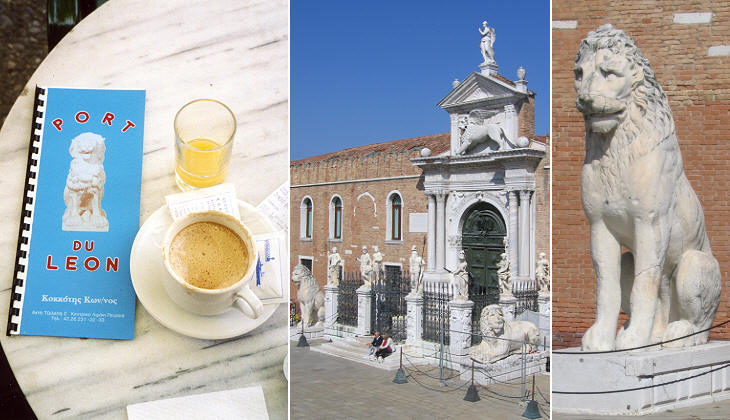 Portus Piraeus is called at present by the Greeks Porte-Dracone, and by the Franks Porto-Lione, by reason of a Lion of Marble, of admirable work, placed at the bottom of the Bay, in a posture of sitting, but erected upon his fore-feet. It is ten foot high, and by a hole pierced through it, answering to its mouth, appears to have been a Fountain. Wheler
Many tourists sit everyday at a Piraeus cafè near the departure of the ferries for the Cycladic Islands. Its menu brings back other memories of Francesco Morosini. At the time Piraeus was called Porto Leone after the statue of a lion at the entrance to the harbour. Morosini removed it and sent it to Venice where it was placed at the entrance of the Arsenale.