- Micono (Mykonos)
(detail of a 1651 engraving by Marco Boschini)

View of the old part of the town

Mykonos is located at the centre of the Aegean Sea; it is very close to Delos, the site of a very important ancient sanctuary to Apollo and to Tinos and not far from Syros, Naxos and Paros. It did not have the same importance as the other islands because its natural harbours had no protection from meltemi, the strong northern wind which blows on the Aegean Sea. 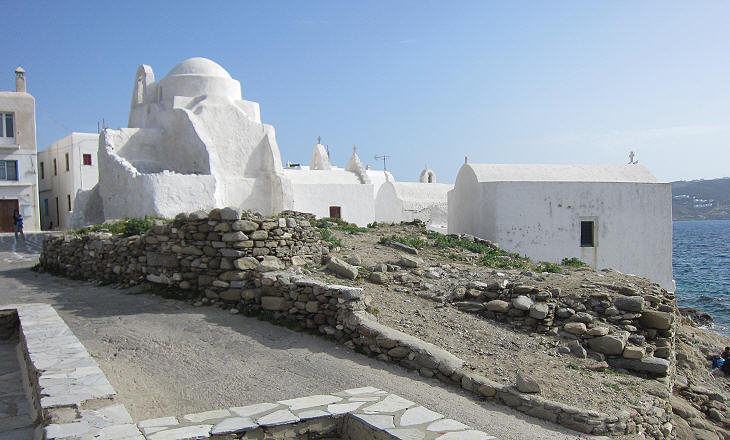 Ruins of old walls and in the background Panagia Paraportiani (the epithet means "near the gate"), a complex made up of five chapels

The Venetian town was built on a low and small headland which only partially protected a cove. The harbour faced north so when the meltemi blew ships could not moor.

Venetian houses were built right on the edge of the low cliff: they probably did not have as many balconies as they have today. "Little Venice" is known for its many restaurants and shops.

(left) An old house; (right) Our Lady of the Rosary, the Roman Catholic church

During the long period of Venetian rule Mykonos was a sort of appendage of Tinos and the Roman Catholic Bishop of Tinos had authority over Mykonos.

Inscription at Our Lady of the Rosary

The church was renovated by Bishop Angelo Venier during the pontificate of Pope Innocent XI. This pope supported the Republic of Venice financially during the 1685-99 war which led to the conquest of Morea (Peloponnese).
The coat of arms of the King of France was most likely placed above the inscription after 1715, the year Mykonos became an Ottoman possession. France acted, with the permission of the Sultans, as protector of the Catholics living in the Ottoman Empire: the coat of arms meant the church was under French protection. 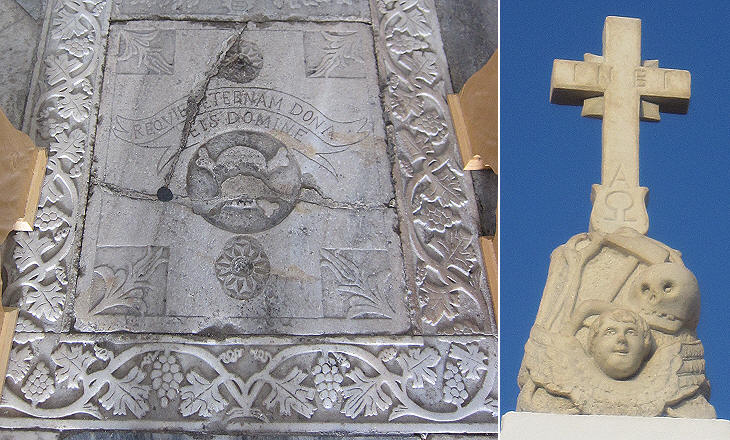 (left) Gravestone inside Our Lady of the Rosary with the initial sentence of the Mass for the Dead (Requiem aeternam dona eis Domine - Grant them eternal rest, O Lord); (right) decoration of the top of an old chapel

During the XVIIth and XVIIIth centuries the decoration of many Roman churches and funerary monuments was based on reminders of Death (Memento Mori). This fashion was not limited to Rome and bones and skulls can be seen even at Mykonos, although the island was very poor and scarcely populated.

In the late XVIIIth century and in the early XIXth century Tinos and Syros, as well as other Greek islands, developed a large merchant navy which supplied the various provinces of the Ottoman Empire. The corn bought in Syria or in the Anatolian tableland was processed in Mykonos and this explains why so many windmills were built near the harbour (from this point of view the meltemi was a positive factor).

The image used as background for this page shows Panagia Paraportiani.