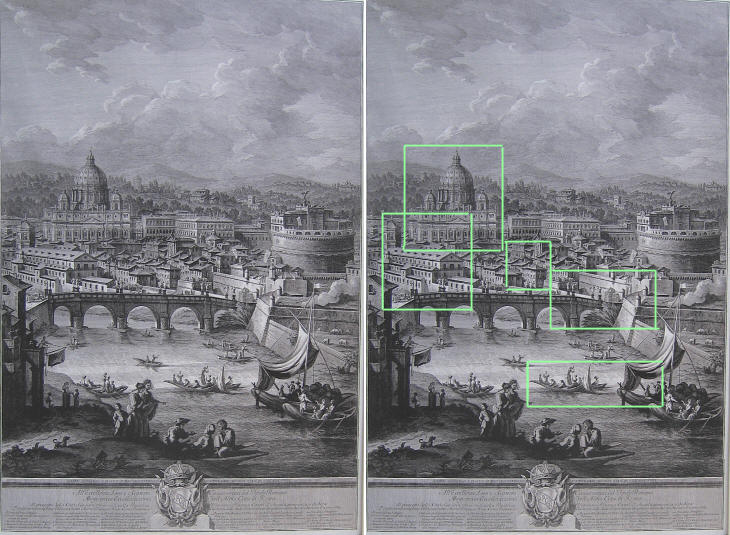 The choice of Campo Vaccino and of the Vatican City as the subjects of the two 1765 etchings was consistent with the approach followed by Vasi in his ten books of etchings aimed at showing the magnificence of both ancient (Campo Vaccino) and modern (Vatican City) Rome. For the 1771 etchings Vasi chose areas of Rome which were not visible in detail in the Grand View of Rome.
Città Leonina (Leo's City) is a reference to Pope Leo IV, who first built walls to protect the Vatican area.

The lower part of the etching contains a dedication to i Signori Conservatori del Popolo Romano, the appointed officers who acted as City Council of Rome. One of the palaces in Piazza del Campidoglio is still named after them. They were the heirs of Comune di Roma, the municipal government which at the time of Cola di Rienzo challenged the authority of the popes.

Vasi placed between the etching and the dedication a sentence from Propertius' Elegies (Book III 2.2).

OMNIA ROMANAE CEDANT MIRACULA TERRAE
NATURA HIC POSUIT QUIDQUID UBIQUE FUIT.
(All the wonders of the world cannot match those of Rome,
because Nature placed here all that has ever been)

This etching was most likely influenced by a painting by Caspar van Wittel (1652-1736), a Dutch painter who spent most of his life in Rome and who became famous for his vedute (highly detailed, large-scale townscapes). His son Luigi Vanvitelli became one of the leading Italian architects of the XVIIIth century.

(left) The façade and the dome of S. Pietro in the etching; (right) the basilica seen from Ponte Umberto I

Vasi, even more than van Wittel, was a supporter of veduta esatta, an extremely detailed and accurate depiction of the landscape and of its monuments. There is no evidence that Vasi made use of a camera obscura, but this device was already known at the time of this etching: it was made up of a movable room with a rotating angled mirror on the roof which projected an image of the landscape on to a horizontal surface inside. The famous painter Canaletto used it.
By comparing the etching with a current photo of the basilica one can notice the addition of the two clocks (near the ends of the façade).

The access to Ponte Sant'Angelo was often restricted and ordinary people crossed the river on a barchetta (a small ferry): at the end of the bridge there was a rastrello, a checkpoint having the appearance of a cage. The access to Castel Sant'Angelo was last modified by Pope Urban VIII who built two bastions at the sides of the bridge: he also built a new main gate. The etching shows that there was large spontaneous vegetation on the narrow bank between the bastion and the river.

The access to Castel Sant'Angelo after the XIXth century alterations: in the foreground Torre di Papa Nicolò V and (in the detail) the Pope's coat of of arms (N.PP.V.): to the far right the gate which stood on the river side

The construction of walls along the river to prevent it from flooding Rome led to pulling down the bastions; in doing so the structure of a small tower was discovered: it was built by Pope Nicholas V. The last two arches of the bridge were replaced by a single modern arch having the same height as the others; the main gate was relocated on the northern side of Castel Sant'Angelo.

(left) "Spina di Borgo", the block of buildings to the right of the couple of angels; (right) the same site after the 1936-1950 changes: in both images you can see S. Maria in Traspontina

After the completion of Piazza S. Pietro and the positioning of statues of angels on Ponte S. Angelo, the popes considered improving the street between the two. In 1694 Carlo Fontana, the leading architect of the time, developed a project for pulling down most of Spina di Borgo, a long and narrow block of buildings (spina=thorn), in order to obtain a more spacious approach to Piazza S. Pietro. Financial constraints led to shelving the project, which was again thought of during the pontificate of Pope Pius VI, during the French Administration and eventually in 1850, after the return of Pope Pius IX to Rome, but the plan never got off the ground.

Via della Conciliazione and Piazza Pia

In 1929 an agreement between the Italian Government and the Holy See closed the "Roman question", the dispute arisen from the Italian annexation of the former Papal State. The closure of the issue was called la Conciliazione and this name was given to the avenue obtained by pulling down Spina di Borgo; work started in 1936 and, after an interruption due to WWII, was completed in 1950. The people who lived there were relocated at la Garbatella, a new development outside the walls.
After 1870 the square at the beginning of Spina di Borgo was called Piazza del Plebiscito, a reference to the almost unanimous vote which confirmed the 1870 annexation of Rome to Italy: that name was tantamount to an insult to the pope and it did not suit the new political climate between Italy and the Holy See: so the square was given back its old name Piazza Pia, a reference to Pope Pius IX.

The etching shows a rare view of Spedale di S. Spirito after its enlargement during the pontificate of Pope Benedict XIV: architect Ferdinando Fuga extended Corsia Sistina, the hospital wing built by Pope Sixtus IV: this involved pulling down a small oratory which was rebuilt in 1745 opposite the new wing: this oratory was again pulled down in 1940 and rebuilt in a slightly different location in 1950, when the whole area was redesigned to make room for Via della Conciliazione. The enlargement of the hospital by Fuga was almost entirely pulled down in the first half of the XXth century and, based on frescoes inside the hospital, the old Renaissance façade of Corsia Sistina was restored.

In the XVIIIth century the Romans went on a picnic to Prati di Castello, the meadows to the north of Castel Sant'Angelo: Vasi shows some people returning home on two small boats; they are still in the mood for drinking and playing the tambourine (the light of the etching is that of a late afternoon). See more about Leisure in the etchings of Giuseppe Vasi.