- Introduction
(detail of the theatre at Thugga)

In 146 BC, at the end of the Third Punic War, the Romans destroyed Carthage and established their first province on the southern shore of the Mediterranean Sea; it was called Africa, a name the etymology of which is uncertain, but which probably meant Land of the Afri, a term indicating the native tribes who lived there prior to the arrival of the Phoenicians who founded Carthage and other towns along the coast.
The new province included only the north-eastern part of today's Tunisia and its capital was Utica, a town the inhabitants of which had helped the Romans to defeat the Carthaginians. In 105 BC the province was enlarged after the Romans defeated Jugurtha, King of Numidia and it included Tripolis (three cities) in today's Libya.

Pax Romana is the term used by historians to indicate the long period of peace enjoyed by the Roman Empire between the end of the civil wars in 27 BC and the death of Emperor Marcus Aurelius in 180 AD.
In the Province of Africa this period of prosperity led to the development of many towns in the interior of the country in addition to those along the coast. 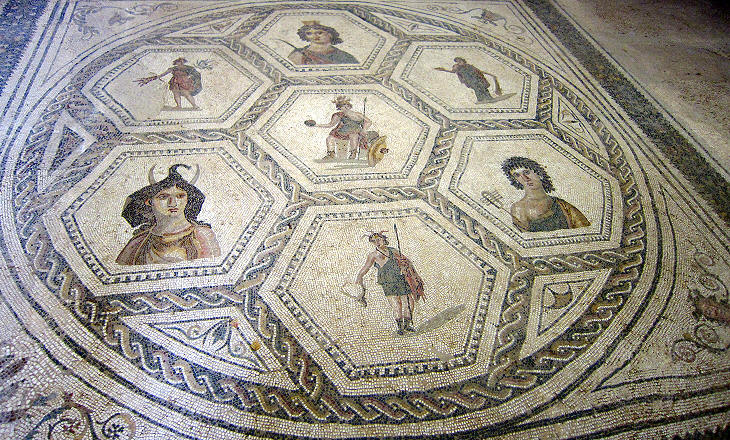 Thysdrus (El Djem): House of Africa: mosaic portraying an allegory of the Roman Empire: Rome is depicted at the centre of the mosaic and is surrounded by some of the provinces: (clockwise) Sicily, Asia, Egypt, an unknown province, Africa and Spain. Africa is identified by elephant tusks

Africa continued to indicate a section of the southern Mediterranean coast and not a continent for many centuries. The Arabs adopted the Roman term and called Ifriqiya today's Tunisia. European medieval maps which partitioned the world among the three sons of Noah, associated Africa with the land from Morocco to Egypt, whereas the biblical reference to the Land of Ham was limited to the latter. 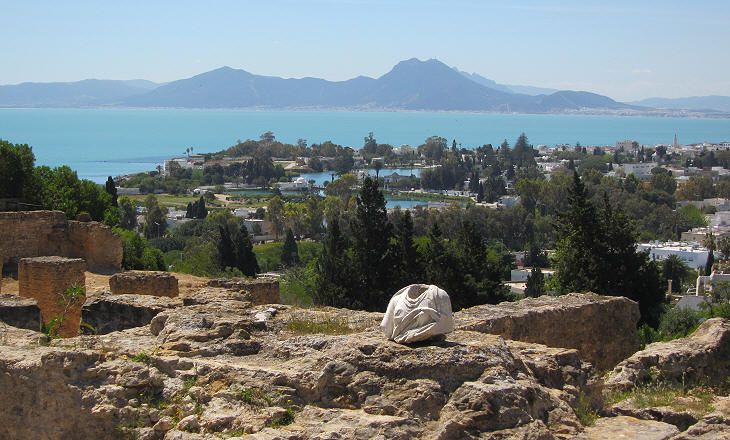 In 146 BC the Romans razed Carthage to the ground, burnt all the ships, killed or enslaved all its inhabitants and according to some historians the city was cursed. Carthage however was located in an excellent position and the Romans themselves started to rebuild it in the Ist century BC and Emperor Augustus made it the capital of the province. 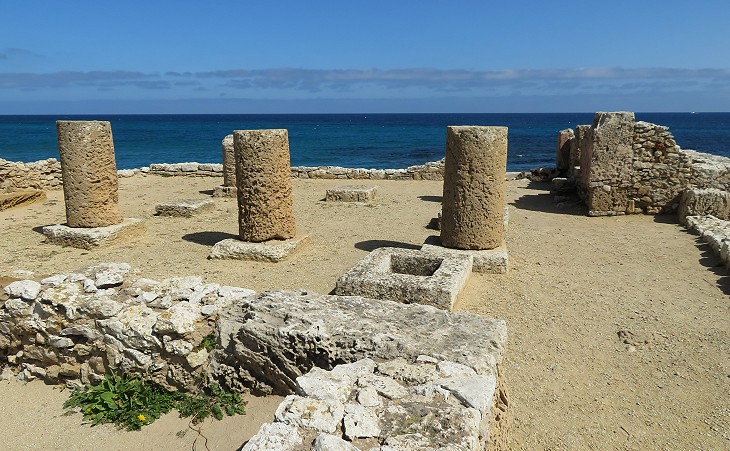 Kerkouane: House with a Peristyle

The Punic Town of Kerkuane has preserved all its architectural and town planning components, which are located at the boundary of the property. Following its destruction during the First Punic War around 255 BC, the town was abandoned and, contrary to other Punic cities which after the fall of the Carthaginian metropolis, were Romanised and lost their Punic features, Kerkuane was never reinhabited.
From the UNESCO synthesis of the universal value of Kerkouane which in 1985 was included in the World Heritage List. 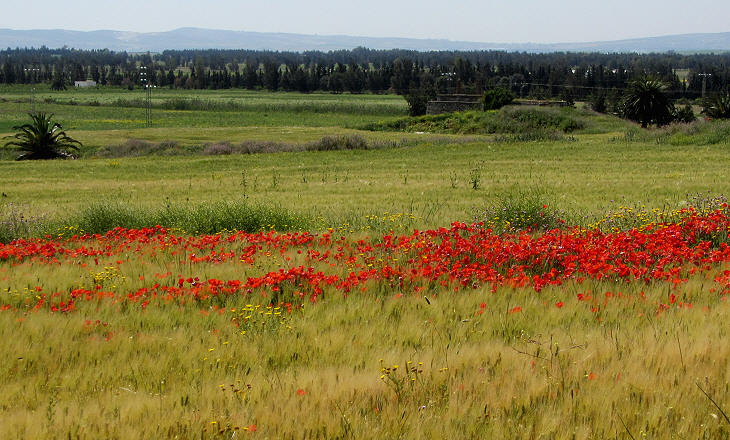 The Mejerda Valley near the mouth of the river at Utica

The wealth of Africa resided in its agriculture. The province was one of the granaries of the Empire and in particular it supplied Rome. The valley of the Bagrada (Mejerda) River which flows in the north of the country was renowned for its fertility and the fact that the river was navigable from Simitthus to its mouth made transportation of its crops easy. 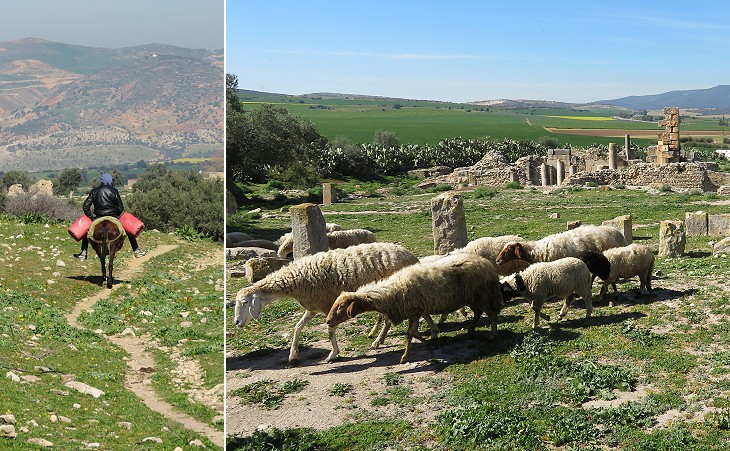 Thignica in the Mejerda Valley: countryside life on the top of the hill and near the baths

The mightie river of Megerada springing forth of the mountaines neere unto the citie Tebessa (in Algeria), (..) continueth a northerly course, until at a place fortie miles distant from Tunis it exonerateth it selfe into the Mediterran sea. In rainie weather it so increaseth, that travellers, bicause there are neither boates nor bridges, are constrained to staie two or three daies by the rivers side till it be decreased. (..) And hereby you may see how the Africans of these times degenerate both in wit and courage from the ancient Africans.
Leo Africanus - The history and description of Africa: and of the notable things therein contained - 1526 - 1600 translation by John Pory. 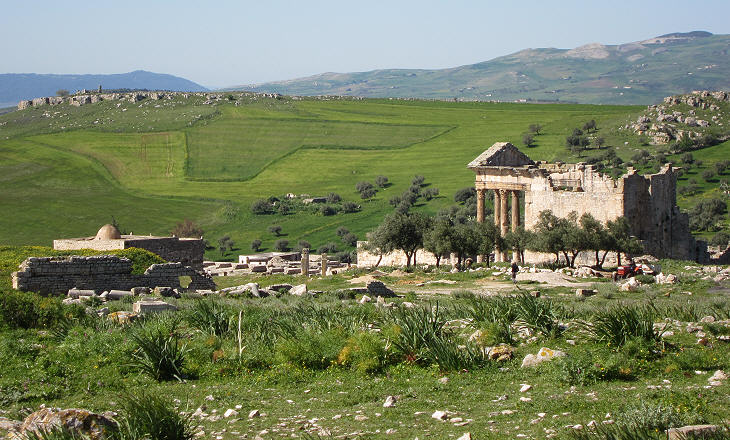 View of Thugga and of its Capitolium

The growth of the settlements from villages to towns can be traced in inscriptions celebrating the construction of monuments or facilities. At Thugga, the town is referred to as Pagi Thuggensis in an inscription celebrating an arch dedicated to Emperor Claudius. 150 years later an inscription celebrating Emperor Septimius Severus speaks of Civitas Aurelia Thugga. Pagus is the Latin word for country district, whereas civitas indicates a town the inhabitants of which had Roman citizenship. This event at Thugga and other towns was celebrated by erecting a Capitolium, a temple dedicated to Jupiter, Juno and Minerva, the three deities who were worshipped in the Capitoline hill of Rome. 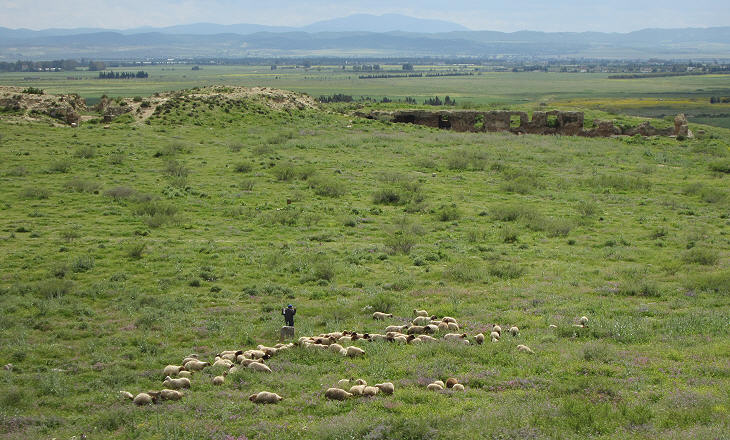 It is extremely difficult to understand how the country could have supported the immense population which it must have contained during the Roman period. It is covered in every direction by the ruins not only of great cities, but of isolated posts and agricultural establishments. In many parts one cannot ride a mile in a long day's journey without encountering the ruins of some solidly-built edifice.
Handbook for travellers in Algeria and Tunis - John Murray 1878
Although their economy was based on agriculture, the towns of Africa had all the facilities typical of an urban settlement: paved streets, aqueducts, fountains, baths, tribunals, marketplaces, theatres and amphitheatres. A network of roads linked the towns of the interior with Carthage and other ports. 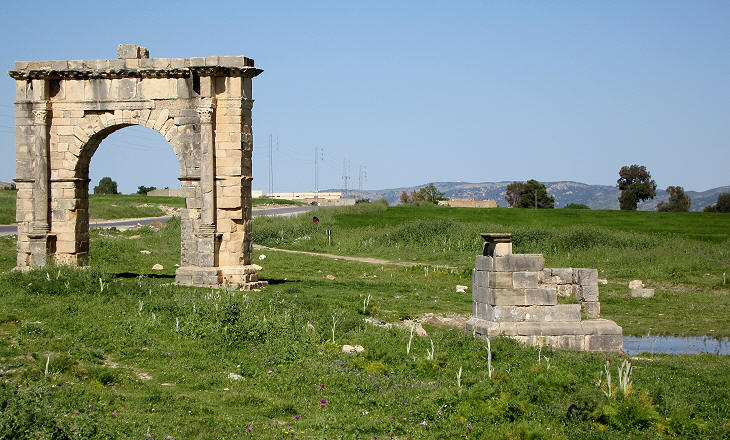 Musti - Arch to Gordianus and Mausoleum of the Julii

Entrances to towns were often identified by triumphal arches. In addition to their celebratory purpose they indicated the limits of the urban settlement for some practical aspects such as the prohibition to wear arms and to build tombs. They were not gates of a fortification system, because the towns did not have walls. Roman Legion III Augusta was stationed at Theveste, a town just across the border with Algeria, from which it prevented desert nomadic tribes from entering the province. 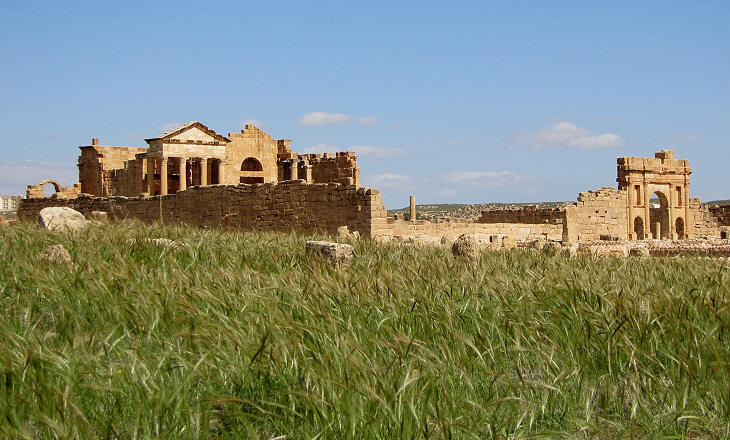 Sufetula - The forum turned into a Byzantine fortress

At the beginning of the IVth century, as a reaction to the persecution of Emperor Diocletian, many Christians of Africa embraced Donatism, a local church supporting a rigorous vision of Christian values in contrast to those who looked for an appeasement with the Roman State. It was the beginning of a religious and ethnic split among the inhabitants of the province which eventually facilitated the invasion of the Vandals, a Germanic tribe, in 439.
Africa was conquered by the Byzantines in 533. In order to protect the inhabitants of the towns they turned the forums into small fortresses; they did so in a hasty way by pulling down all the buildings around the forum and by using them as construction material. This did not prevent the Arabs from conquering the whole province at the end of the VIIth century. 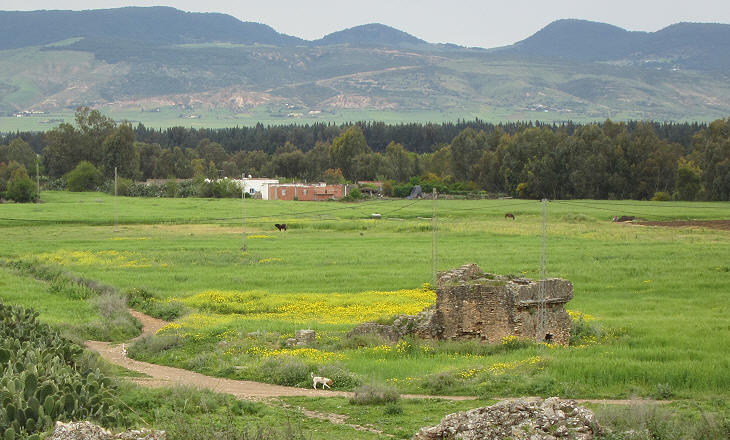 The monuments of the Roman period in today's Tunisia can be found in different settings. The Arabs destroyed Carthage and used the columns of its churches/temples to build a large mosque at Tunis. Some towns did not disappear and foundations of Roman buildings can be seen in the heart of the medina, as it occurs at Le Kef, ancient Sicca Veneria. Thugga and other towns returned to be small villages of peasants and their remains are often surrounded by farms. In general ancient monuments are included in archaeological parks, but it is not unusual to see them immersed in a very rural environment. 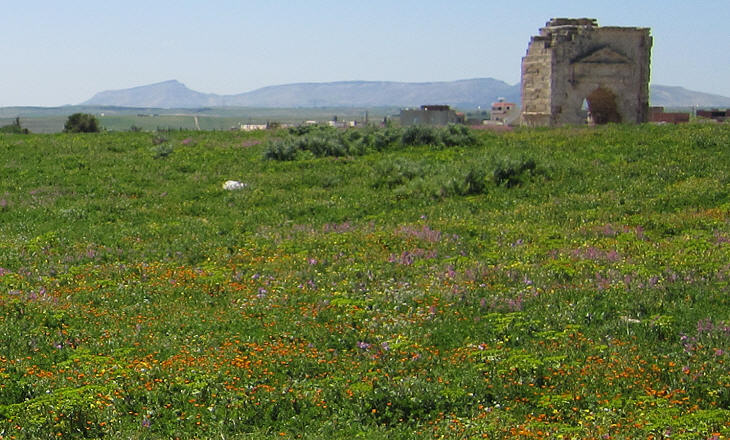 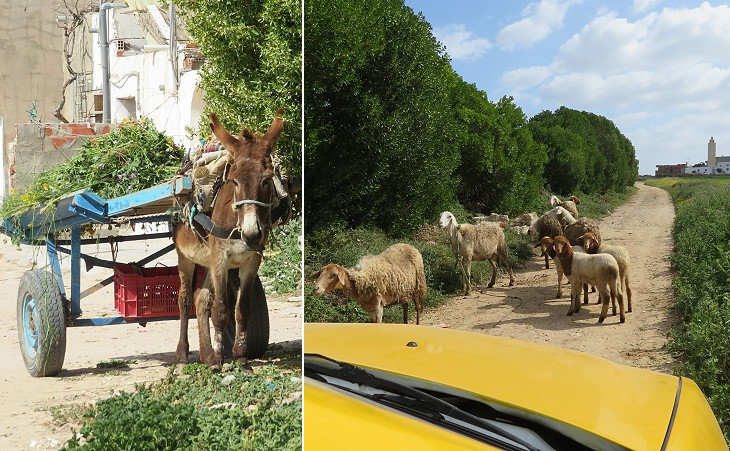 En route to the catacombs of Sullectum

The image used as background for this page shows the aqueduct which brought water to Carthage from Ziqua.