- Folegandros
(detail of a 1651 engraving by Marco Boschini) 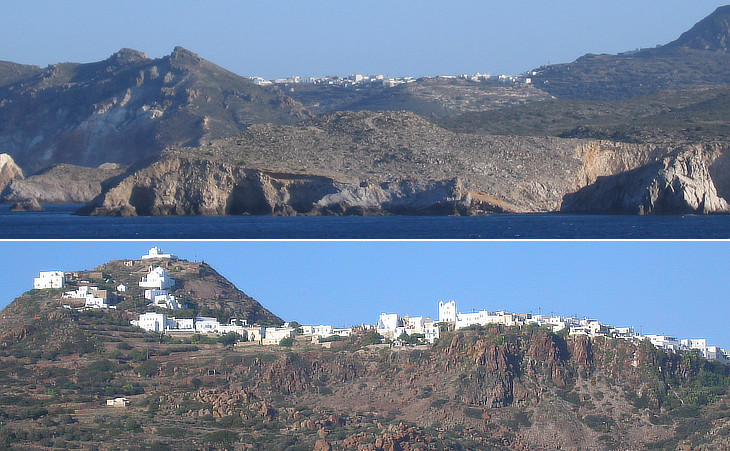 View from the sea of the coast and of the town

One would think the folks at Policando learned of their neighbours of Sikino to have a delight in living separate from the rest of the people of the Archipelago. Those of Sikino cannot have a port to receive the vessels from the other islands that might come in friendship and in traffic, and those of Policando won t. We could find no better place to land than a very poor creek and were forced to climb a parcel of wet and dirty rocks to get to shore. The principal town or shall I call it the town is oddly situated.
Thomas Broderick - Letters from Several Parts of Europe, and the East: Written in the Years 1750, etc.
Of all the islands of the Aegean Sea Pholygandros can boast of the most majestic coastline; in fact, I doubt if it can be equalled anywhere. A precipitous line of rocks, in places rising 1,160 feet above the sea, forms the north-eastern bulwark. (..) When we saw the spot again by daylight we wondered exceedingly how we had been able to climb up on hands and knees; it is known as the Plaka, a flat rock which slopes down into the sea at an angle of fifty degrees, and which is slippery in winter with running water; after scaling which we had a tremendous scramble in the dark up to the town, which is built on the edge of the cliff, 750 feet above us.
James Theodore Bent - The Cyclades - 1885

The town is not one of the least upon this island nor is it ill inhabited. Broderick
On reaching habitations we inquired where the demarch lived. "Outside," was the stoical reply. Outside what?' we asked. "Not Inside," was the angry rejoinder; and no further information could we get out of the man. We pursued our way in search of a more intelligent informant, until at length we discovered that Pholygandros boasts of only one town, which is walled, and called "Inside" and of a colony outside this wall, of better-class houses, which is called "Outside"; and a Pholygandriote knows of no other names but these. Bent
The houses of the fortified village were aligned one next to the other with only one entrance to the interior. A similar urban layout can be seen at Antiparis and Argentiera.

A church and other buildings outside the fortified village

"Outside", is clean and well-paved, in every way prosperous, being the pride of its ruler, our host, the demarch. The "insiders" represent the old aristocracy, who are slow to introduce the innovation of cleanliness. (..) Only some of the richer inhabitants, and amongst them Dr. Venier, have kept their old dresses, ornaments, and lace; the poorer people have by this time sold all theirs, and Dr. Venier showed us some very lovely things. Bent
Similar to what can be noticed at Nasso, the families of Venetian/Latin descent lived inside the small town. 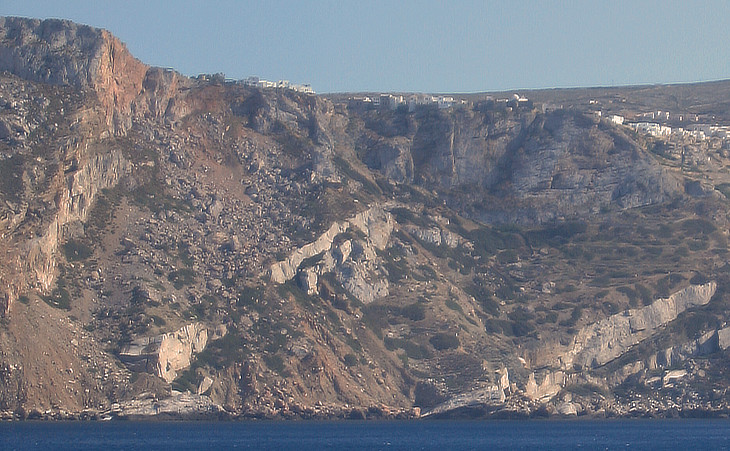 The ravine under the fortified town

Before we left the island I took full directions about a grotto which they talked much of and which was to be viewed from the seaward; tis in the rock that forms one of the horrible precipices to the left of the creek where we entered. Broderick
The town of Pholygandros rejoices in a most glorious situation. "Inside", or the old fortified town, is built on the edge of the cliff, so that it only requires three walls to protect it; the fourth side looks straight down the yawning precipice, 750 feet into the sea. Bent
The site was carefully chosen to provide maximum protection with limited effort: the ravine on the western side of the village was very deep and the coast below did not allow the enemy to land. 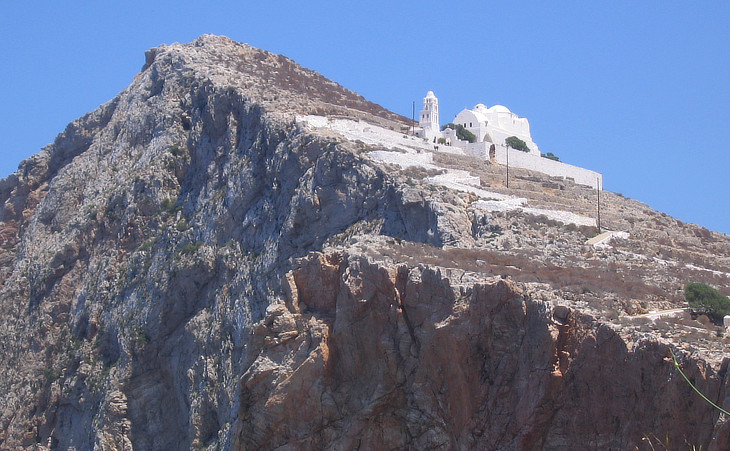 The island is burnt up; the rock is but poorly covered and in many places a hard wind will take away sometimes not only a man's crop, but the very ground that it grew upons and in the place of a fruitful field leave a naked rock. (..) There are as many chapels here as on any island of the size in the Archipelago. (..) The best in most of these places is dedicated to the Virgin and that which is honoured with her name here is one of the neatest edifices I have seen, but it stands as is usual upon a rock. At a little distance from this lie the ruins of the old dukes of Naxia's palace; I examined them and I discovered that even this demolished building was erected out of the remains of some much older edifices. The town of Philocandros very probably stood here in the time of the old Greeks and what we find that carries the marks of an earlier antiquity is probably of that orgin. I saw some fine remains of porphyry and granite columns and a piece of a decayed bas relief. (..) There is no supposing these things the original works of a duke of Naxia. (..) The accounts of the people when they heard me enquiring after things of this kind convinced me here must once have been more. Broderick
Towering above the town is a pointed cliff forming the summit of that wall of precipice which rises straight out of the sea. On the summit of this cliff is perched the remains of a castle, which once belonged to the dukes of Naxos, and all that is left of the old Hellenic town. This is 1,160 feet above the sea, but what one chiefly sees now are Roman remains, cisterns, and walls. Into the bell tower of a large church half-way up the hill, dedicated to the Assumption of the Virgin, is let the torso of a Roman figure, and in the church itself there are traces of old pillars. Bent
There is no historical evidence that the ancient town was a major one, yet it had some fine columns. 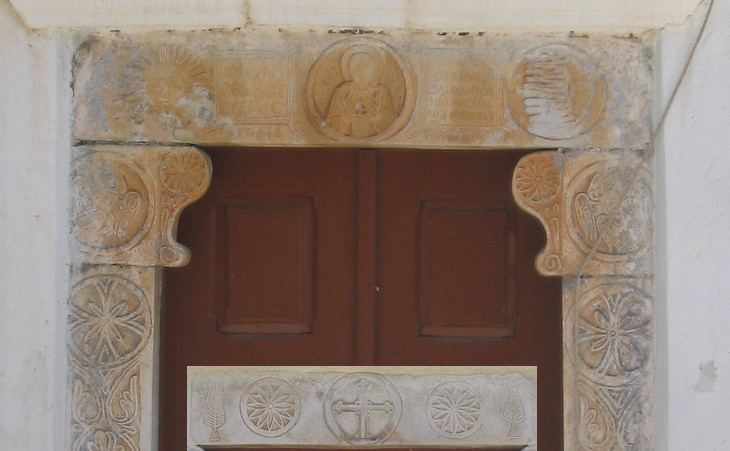 The people of curiosity have carried off many of the inscriptions and the Turks have taken many of the columns. But beside these we heard of other ruins of such noble works we were told of a statue cut into four pieces to make the threshold of a door and of some fine remains in brass melted down to make ornaments and utensils for the chapel. Broderick
The stones for the lintels of some of the churches were most likely taken from the ruin of the ancient town or of the medieval palace.