- Corone (Koroni)
(detail of a 1651 engraving by Marco Boschini)

(May 1805) We soon begin to descend the mountain by a rocky road, and look down upon the forest of olives which surrounds Koroni to the distance of three miles. (..) We pass through olive grounds and corn fields. (..) The modern Koroni probably occupies the site of Colonides, (..) The resemblance of the names, Colonides and Corone, may easily account for the substitution of the one for the other in the barbarous ages, which gave rise to the new nomenclature of Greece. (..) But there is another story, concerning the nomination of the city, namely that those who were digging the foundations of the wall found a brazen crow.
William Martin Leake - Travels in the Morea - 1830

The fortress seen from the west: behind it the Mani peninsula

We ascended a stony height whence we could discern the gulf of Coron (or Messenian). (..) Our course was directed to the east, (..) and soon after we discovered the town of Coron, built on the site of the ancient Colonides. It is of a triangular form, and presents at a distance the appearance of a very considerable town, as it is in effect. (..) It possesses the advantage of being the residence of consuls general from almost all the powers of Europe. (..) Coron is the most healthy spot along this fine coast.
François Charles Hugues Laurent Pouqueville - Travels in the Morea, Albania, and other parts of the Ottoman empire - 1817 edition
Corone became an important fortress under the Byzantine rule. It was captured by the Franks of the Fourth Crusade and assigned to Geoffrey of Villehardouin (1205) who, by the Treaty of Sapienza (1209), ceded it to the Venetians; the terms of the treaty were later on ratified by Emperor Michael VII Palaeologus. The Venetians called Belvedere (fine view) the territory around Corone: this not because of the views towards the Mani peninsula, but because it was very nicely farmed. 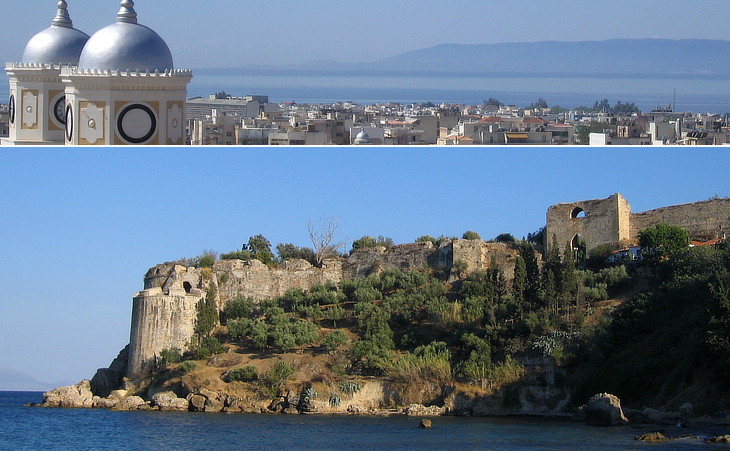 We walked afterwards to a short distance from Kalamata, and occupied ourselves in taking sketches of the place. The point of (..) the castle of Corone on the right, (..) is distinctly seen at once, and form a more picturesque termination to the landscape towards the sea. The castle, situated on a low promontory, was backed by the rock Venetico; and its neighbourhood being further removed from the mountains and their snow, enjoys in winter a much finer climate than Kalamata.
William Gell - Narrative of a journey in the Morea - 1823
With regard to the military state of the Morea, it must be observed that its principal bulwarks are Nauplia di Romania upon the gulf of Argos, Coron, Modon, and Navarin, to the south; Castel Tornese, Patras, and the forts upon the gulf of Corinth, to the north. Pouqueville
Corone and nearby Modon were called the eyes of Venice because they controlled an important section of the maritime route between Italy and the Levant. The Venetians strengthened the battlements of the old Byzantine fort: the town expanded beyond its walls: its population was a very mixed one.

A plan of the fortress is given by Coronelli, since whose time little alteration has been made. Leake
In August 1500 Corone was seized by Sultan Beyazit II (first Ottoman occupation), causing many inhabitants to flee to Zante and Cefalonia.
In 1532 the Allied Fleet of Charles V, the Pope and the Knights of Malta under the command of the Genoese Admiral Andrea Doria, seized the city only to abandon it in 1534, taking with them 2,000 inhabitants, mainly belonging to the Arbereshe (Albanian) community. They settled in southern Italy where already other Albanian refugees lived. They never forgot Corone and Morea as their songs testify.
Oh my beautiful Morea
Oh my beautiful Morea/since I left you,/ I 've never seen you again./ There I have my father/ There my lady-mother/ My brother also/ all buried below the earth./ Oh my beautiful Peloponnese!
The Lament of Corone
We left behind in Coron our possessions and our goods, but have taken Christ with us,oh my beautiful Morea! Deeply sad, with tears in our eyes, we grieve for you Arberia...My swift-flying little swallow, when you return once more to Coron, you will not find our homes, nor our handsome lads, but only a dog (the Ottomans), may death come upon him! When the ships spread their sails and our land was lost to the eyes, all the men with a sigh and the women with a wail cried out: Get out Ghost! devour us! oh my Morea! oh Arberia!

The fortress itself is in better repair and of a better construction than those of Navarino and Mothoni. Leake
In 1685 the Venetians under the command of Francesco Morosini laid siege to the fortress; they soon had to face the arrival of an Ottoman army; Morosini decided to attack the enemy and forced them to flee; more than a hundred enemy heads were placed on pikes and shown to the fortress defenders, who nevertheless refused to surrender; a second Ottoman army was repulsed; eventually the fortress fell and the assailants killed all the inhabitants, including women and children: the winged lion of Venice was placed again on the main gate of the fortress (it is now in a street leading to it).

(left) North-eastern bastion surrounded by olive trees (the image used as background for this page shows the cypress trees); (right) olive-grove inside the fortress

In the neighbourhood of Coron and Calamatte (..) the olive-trees are particularly large and strong. (..) The respect of the people for these trees is such, that they pay them a sort of veneration when they are loaded with fruit; to cut off a branch would be a crime against which the whole country would rise in arms. (..) The olive-trees blossom about March, and the fruit is gathered in October and November by beating the trees with long poles. The oil of the Morea is of a greenish hue, but of a delicious flavour, and has no smell. That of Ma'ina, which is the best, is held in particular esteem at all the principal markets of Europe. A considerable quantity of black or ripe olives are preserved with salt at Coron, and sent from thence almost all over the Levant. Pouqueville
The fortress was strengthened by the Venetians, but when in 1714 a large Ottoman army invaded Morea, the Venetian consulta, (the council of commanders in charge of the war) decided to move the garrison of Corone to Modon, in the hope of being able to defend the latter fortress.

After traversing the Greek suburb of Koroni, we arrive at the house of Mustafa Bey on the sea-side; his harem is in the castle, where, likewise, his four nephews have a serai. (..) There are about 200 Turkish families in the fortress, and 130 Greek in the suburb. The Greeks give melancholy accounts of the atrocities of these janissaries of Koroni, who are gradually reducing to desolation the beautiful region of olives, vineyards, and gardens, which surround the town. Before the year 1770 (a Russian Ottoman War), there were four French mercantile houses here, who exported grain, oil, and silk, from this and the surrounding district. Leake
May 24. 1821 - Off Zante. (..) The next morning we passed Navarino, and proceeded on by Modon, in possession of the Turks, built along a range of hills. We next passed Coron, on the sea-coast, but rather elevated, and crowned by lofty mountains, the tops of some of which are hidden in the clouds, and others tipped with snow.
John Madox - Excursions in the Holy land, Egypt, etc. - 1834
In 1824 during the Greek War of Independence, the insurgents made an attempt to seize the fortress by climbing a tower on its southern side. Probably they hoped to take the garrison by surprise, but the plan failed and most of the attackers died: the tower is called Resalto (salto in Italian means jump, so probably the name is a reference to the attackers jumping down from the tower). A chapel was built at the top of Resalto in memory of the fallen.
In 1828 Général Maison, commander of the French expeditionary Corps (who helped the Greek insurgents), managed to occupy Corone; the Muslims had to leave the town. It was not the last war event which occurred in the fortress; in 1944 during the Greek Civil War a fight for the control of the town ended with the massacre of more than 1,500 civilians. It is therefore very appropriate that the site of the fortress is today occupied by a large olive-grove and by a few churches and small graveyards.

Eastern bay and steps leading to it

The castle-hill is very steep on all sides, and seems to have been the Acropolis of the ancient city, which occupied this site, and of which nothing is now left but some cisterns and remains of walls. (..) A low point called Livadhia, projects from the eastern side of the castle 400 yards into the sea. It is rocky and impracticable to a landing, except in the finest weather. Leake 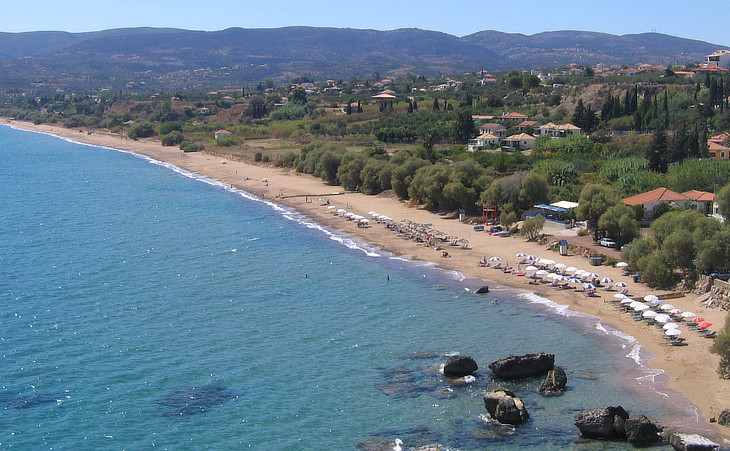 There is another sandy beach, which extends for two miles along the shore on the south-west, but it is much exposed to a surf from the southward. The anchorage of Koroni is so very subject to this inconvenience, that vessels are frequently driven ashore; but as the bottom is in most parts a soft sand, they often escape without much damage. Leake