- The Fourteen Quarters of Rome
(coat of arms of Rione Sant'Eustachio)

The districts of Rome were defined in a precise manner in 1743 by Pope Benedict XIV. The area inside the walls was divided into 14 districts called Rioni. One of the criteria followed in the definition of the districts was to have an even distribution of the population, at the time grouped near the river. This explains why the area of the rioni is so different. 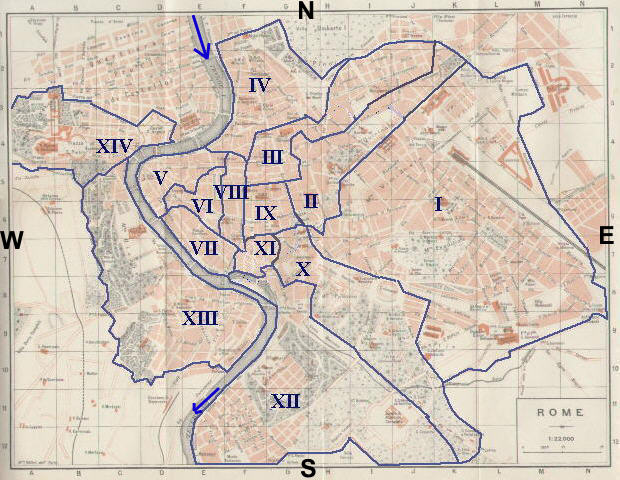 The decision to divide Rome into fourteen quarters was in part suggested by the fact that also Ancient Rome was divided into fourteen regiones (hence rioni); thus Rome was also called Urbs regionum quatuordecim. 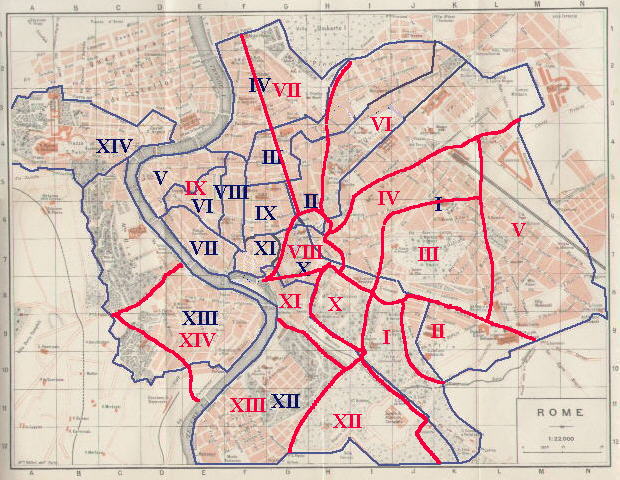 Approximate borders of the Regions (in red) of Ancient Rome

The division of Ancient Rome into fourteen regiones was introduced by Emperor Augustus to provide Rome with a new administrative structure which could meet the requirements of a very large city. The regiones were not limited by the walls which were built nearly 300 years later and they were only known by their number (as we still do for the arrondissements of Paris), but over time they were referred to by mentioning a monument or a hill included in the region. Transtiberim (Trastevere) was the only region of Ancient Rome on the right bank of the River Tiber. 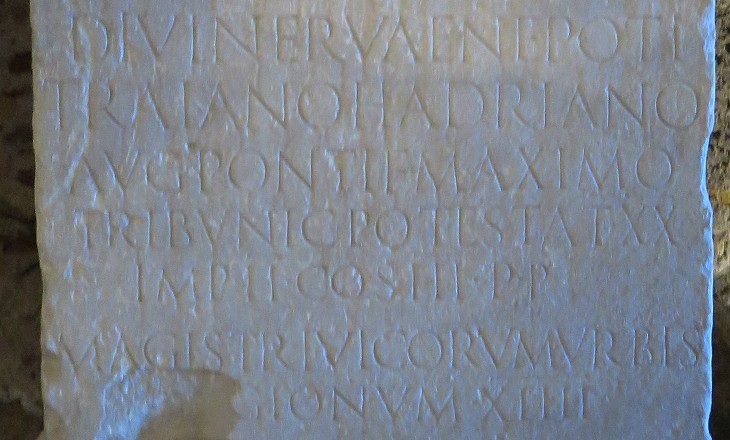 Musei Capitolini: inscription on the base of a (lost) statue of Emperor Hadrian. The statue was erected by the "Magistri Vicorum Urbis Regionum XIIII", magistrates in charge of local religious ceremonies in the 14 regions into which Rome was divided

The table below provides an approximate relationship between the modern and the ancient division of Rome.

The table shows how the most populated areas of Ancient Rome (on the hills) were abandoned in favour of locations close to the river. For this reason three modern rioni (Monti, Campitelli, Ripa) covered the same area of 10 ancient regiones, while a single regio (Circus Flaminius) was in the XVIIIth century divided into more than 6 rioni. The following is a description of the populated part of Rome in 1594:
If you draw a line from the East-side of the Mountaine Capitolino to the Gate del popolo, lying towards the North; and from the said Mountaine draw a line to the furthest part of the Bridge upon the West side of the Iland of Tyber, this compasse may truly be called Rome, as at this day it is inhabited; for the rest lies wilde, having only ruines, and some scattered Churches and houses, and towards the South, fieldes of corne within the walles.
Fynes Moryson - An Itinerary: Containing His Ten Years Travel Through .. Italy (in 1594)
In 1921 the rioni were increased from 14 to 22:
I-Monti was divided into 3 rioni (Monti, Esquilino, Castro Pretorio);
II-Colonna was divided into 2 rioni (Colonna and Ludovisi);
III-Trevi was divided into 2 rioni (Trevi and Sallustiano);
X-Campitelli was divided into 2 rioni (Campitelli and Celio);
XII-Ripa was divided into 3 rioni (Ripa, Testaccio, San Saba);
the area north of Porta Castello became a new rione: Prati.
Today (2015) Rome is divided into 19 municipalities: the first one includes all the historical rioni.

You can now start your tour of the Rioni.