This section was developed utilizing the accounts of two XIXth century travellers who held secular views as a framework. This choice was suggested by the desire to keep away from the current political and religious debate about this land. The section is illustrated with photos taken in March 2013. 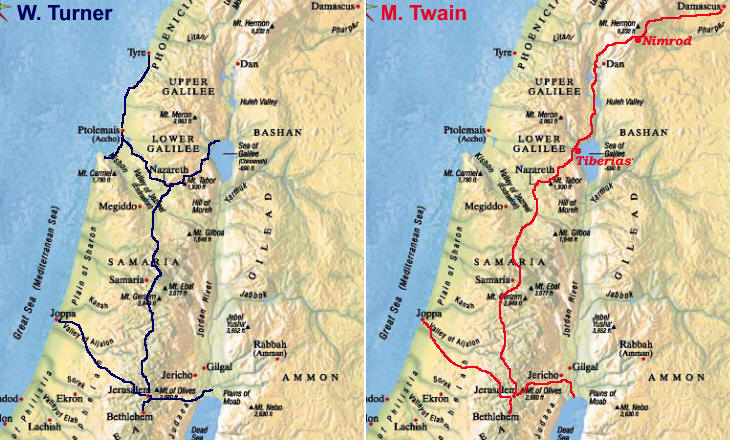 Physical maps showing the routes of the two travellers 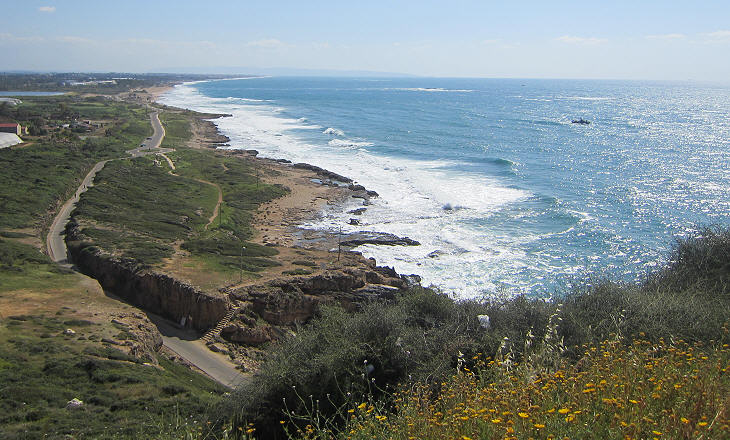 Turner noted in one of his first remarks on the Holy Land: I have made a rule to write nothing at present of the scriptural history of the places I shall see in the Holy Land, but to leave it to be described at some future opportunity when I shall have more time than travelling affords me.
He was more interested in gathering data about the places he visited, than in describing their biblical links. Every day he recorded the temperature. By walking or riding at a steady pace he measured the length of walls surrounding towns and guessed the area they enclosed. He investigated about the population of a town and its ethnic/religious components as well as about its trade. He noted the crops which were farmed and the duties which were levied on them when they were brought to the market. 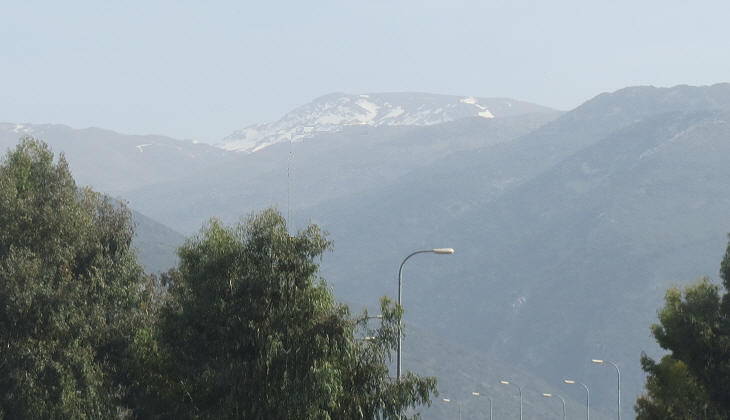 Mount Hermon (its peak at 2,814 m/9,232 ft is on the Syrian-Lebanese border) seen from near Nimrod Castle where Twain entered the Holy Land (you may wish to see it from Qanawat or Zabadani in today's Syria)

Twain was less interested in providing detailed information on the places he visited to his readers and his account is not even precise about the dates of his journey. He abounded in references to biblical and historical events and in picturesque descriptions:
Mount Tabor stands solitary and alone, a giant sentinel above the Plain of Esdraelon. (..) The view presented from its highest peak was almost beautiful. Below, was the broad, level plain of Esdraelon, checkered with fields like a chess-board, and full as smooth and level, seemingly; dotted about its borders with white, compact villages, and faintly penciled, far and near, with the curving lines of roads and trails. When it is robed in the fresh verdure of spring, it must form a charming picture, even by itself. Skirting its southern border rises "Little Hermon," over whose summit a glimpse of Gilboa is caught. Nain, famous for the raising of the widow's son, and Endor, as famous for the performances of her witch are in view. To the eastward lies the Valley of the Jordan and beyond it the mountains of Gilead. Westward is Mount Carmel. Hermon in the norththe table-lands of BashanSafed, the holy city, gleaming white upon a tall spur of the mountains of Lebanona steel-blue corner of the Sea of Galileesaddle-peaked Hattin, traditional "Mount of Beatitudes" and mute witness to brave fights of the Crusading host for Holy Crossthese fill up the picture.
Twain however was scrupulous in noting all the instances where he and his companions had to pay a baksheesh (an alm, a tip or a small bribe) to be admitted to visiting a site or to enter a town or just to avoid being harassed by local officers. 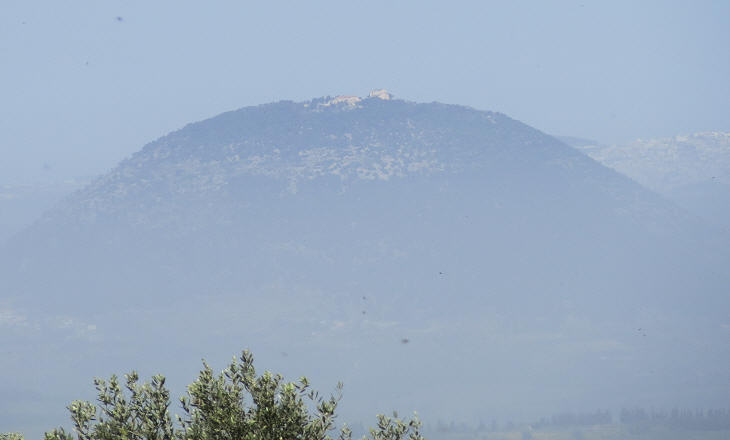 If I had read the Bible from piety as often and as attentively as I have within the last two months for information I should be no unfit candidate for a bishoprick. Indeed I generally carry the Bible in my hand and read the history of the places as I visit them. (Turner).
Notwithstanding his secular views Turner felt he had to visit the sites associated with the life of Jesus and his disciples, although he distanced himself from the events he mentioned: Tabor is very interesting from a tradition extant in the time of St. Jerome that it was the scene of our Saviour's Transfiguration.
Twain travelled with three ministers of the Gospel and his group included many pious people. The visit to the Holy Sites was a must of the journey, but Twain wrote about Tabor almost in the same way as Turner: There is nothing about Tabor (except we concede that it was the scene of the Transfiguration), but some gray old ruins. 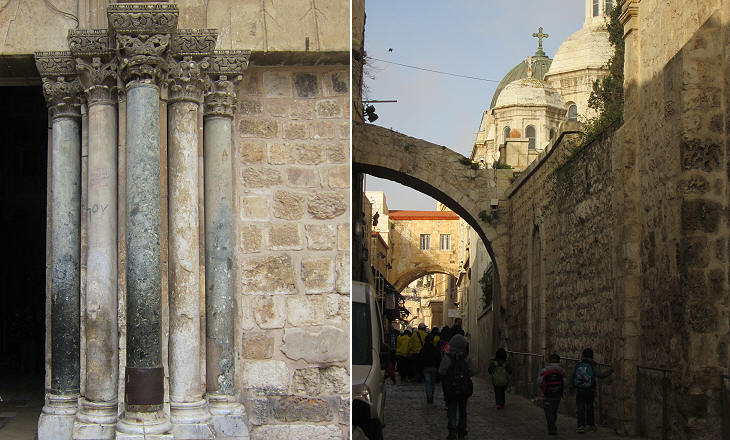 Jerusalem: (left) ancient columns at the Basilica of the Holy Sepulchre; (right) starting point of Via Dolorosa (Sorrowful Way) which houses the first nine Stations of the Cross

At Jerusalem the secular views of Turner and Twain underwent a crucial test.
The main interest of Turner during his visit to the Holy Sepulchre was to find traces of the ancient past of the building. He noted: At the door are six columns of which two are of verd antique and four of marble. He complained that a fire in 1808 destroyed many of the fine columns and of the Mosaick work contributed by Helena, including the dome of the Sepulchre in the old building which was supported by twelve columns of porphyry.
Twain was less keen on ancient columns and mosaics. He described in detail all the various chapels which make up the Basilica, but he concluded: There is nothing genuine about them, and they are imaginary holy places created by the monks.
The two travellers had similar views on Via Dolorosa:
These places are so firmly believed here to have been the scenes of the events above cited that it would have been impolitick for me to express the doubts which were naturally excited in me by the inconsistency of the accounts. (Turner)
We crossed a street, and came presently to the former residence of St. Veronica. (..) We had heard so much of St. Veronica, and seen her picture by so many masters, that it was like meeting an old friend unexpectedly to come upon her ancient home in Jerusalem. We knew her, because we saw her handkerchief in a cathedral in Paris, in another in Spain, and in two others in Italy. In the Milan cathedral it costs five francs to see it, and at St. Peter's, at Rome, it is almost impossible to see it at any price. (Twain) 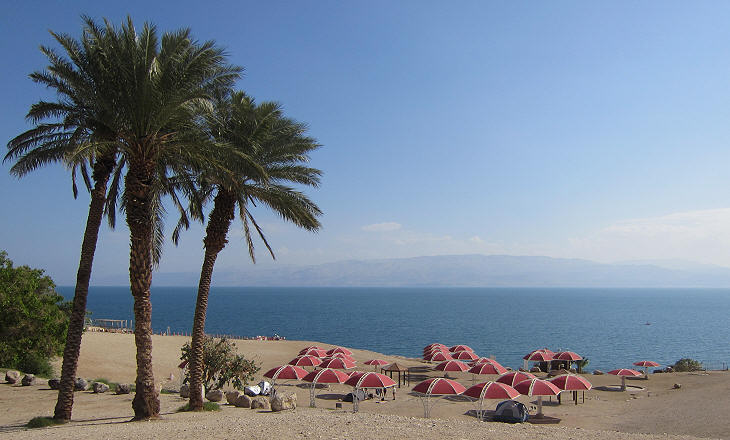 The pious travellers of the past used to end their pilgrimages by bathing in the River Jordan near its mouth, a practice which has been discontinued owing to the current political situation. Both Turner and Twain left accounts of these pilgrimages.
Turner described a very large group of Greek Orthodox pilgrims:
Men and women rushed in promiscuously, the latter in their shifts and the former most of them in drawers. All crossed themselves most devoutly on entering the water and the women dipped their children after first crossing them. Every one carried away a vessel of the water and the very few who had the prudence to consult their age and infirmity by not bathing contented themselves with these relicks.
Twain described his own group pilgrimage:
With the first suspicion of dawn, every pilgrim took off his clothes and waded into the dark torrent, singing: "On Jordan's stormy banks I stand, / And cast a wistful eye / To Canaan's fair and happy land, / Where my possessions lie." But they did not sing long. The water was so fearfully cold that they were obliged to stop singing and scamper out again.
The two travellers added a visit to the shores of the Dead Sea to their excursion to the Jordan. Their accounts were very bleak:
Never did I see such universal desolation as surrounded me here. Not a house, not a tree, not a sign of a human being was to be seen. I did not even see an insect. Ourselves and our horses were literally the only live creatures within the scope of the eye. (Turner)
The desert and the barren hills gleam painfully in the sun, around the Dead Sea, and there is no pleasant thing or living creature upon it or about its borders to cheer the eye. It is a scorching, arid, repulsive solitude. A silence broods over the scene that is depressing to the spirits. It makes one think of funerals and death. (Twain) 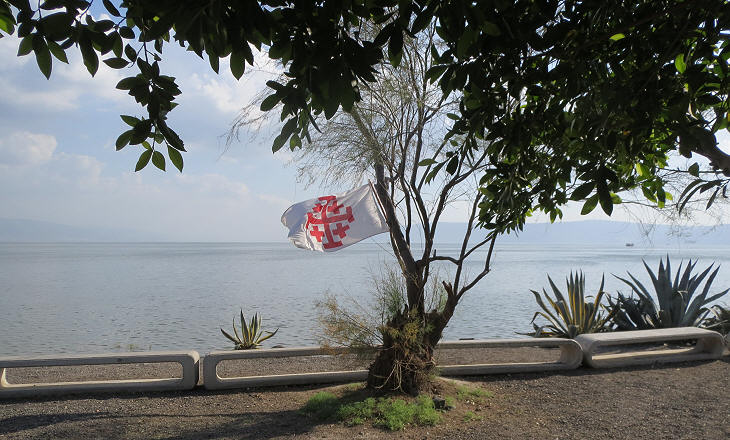 Catholic Flag of the Holy Sepulchre at the Franciscan site surrounding the house of St. Peter at Capernaum on the Sea of Galilee

Turner held a firman, a decree issued by Ottoman authorities which allowed him to travel, and being a diplomat (although a very junior one) he could rely on the assistance and advice of a net of vice-consuls of various European countries. In the Holy Land however he was most often a guest of Franciscan monasteries. Thanks to the good relations established in 1219 between St. Francis and the Sultan of Egypt the Franciscans were granted the right to found monasteries and hostels for the pilgrims. In 1342 they were appointed as the official custodians of the Holy Sites (external link - it opens in a separate window) in the name of the Catholic Church.
Twain was part of a better organized journey, but he too had words of praise for the Franciscans: I have been educated to enmity toward every thing that is Catholic, and sometimes, in consequence of this, I find it much easier to discover Catholic faults than Catholic merits. But there is one thing I feel no disposition to overlook, and no disposition to forget: and that is, the honest gratitude I and all pilgrims owe, to the Convent Fathers in Palestine. Their doors are always open, and there is always a welcome for any worthy man who comes, whether he comes in rags or clad in purple.

Jaffa seen from the southern section of the Tel Aviv Promenade

Both travellers left the Holy Land at Jaffa and sailed for Alexandria.
Turner was very matter of fact in his final paragraph:
At a quarter before seven we set sail and were carried along at a quick rate by a north west breeze. At sun set we lost sight of Jaffa and of the hilly coast of Syria which here bears the appearance of sand hills.
Twain took the opportunity for some general remarks on his experience in the Holy Land:
Of all the lands there are for dismal scenery, I think Palestine must be the prince. The hills are barren, they are dull of color, they are unpicturesque in shape. The valleys are unsightly deserts fringed with a feeble vegetation that has an expression about it of being sorrowful and despondent. The Dead Sea and the Sea of Galilee sleep in the midst of a vast stretch of hill and plain wherein the eye rests upon no pleasant tint, no striking object, no soft picture dreaming in a purple haze or mottled with the shadows of the clouds. Every outline is harsh, every feature is distinct, there is no perspectivedistance works no enchantment here. It is a hopeless, dreary, heart-broken land. (..) Palestine is no more of this work-day world. It is sacred to poetry and traditionit is dream-land.
The image used as background for this page shows a coloured lithograph by David Roberts, a Scottish painter who travelled through Egypt and the Holy Land in 1838-39.
Note: Owing to the lack of a portrait of William Turner, the icon of this section shows a portrait of a young gentleman by Scottish painter Henry Raeburn (1756-1823)