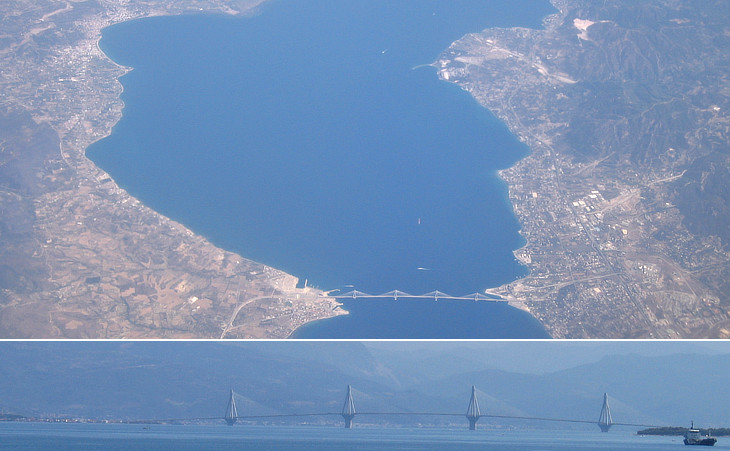 (above) View of the Little Dardanelles from a Rome-Athens flight: (left) Castello di Rumelia; (right) Castello di Morea; (upper left corner) Lepanto (Nafpaktos); (below) the modern bridge over the narrows

December 1675. We crossed over to Patras and we had the two Castles at the Mouth of the Gulph in sight. (..) We went also to visit the Venetian Consul, to have a Pass-port of him, because the English Consul was not then there; and also because our Boat-men were of Zant, under the Venetians. For none can pass in and out again the Gulph of Lepanto, without leave of one of the Castles at the Mouth; which Castles are so near to each other, that it is impossible to pass out of Gun-shot of one, or other, or both of them. Besides, if they let you pass into it, at Lepanto one runs the risque of having the Barque burned. (..) To enter the Gulph, leave must be had of the Castle of Morea; and to come out, of that of Romelia: for so only they distinguish them. (..) No great Ships of the Franks are permitted to come within the Castles; but stay at Patras, and send in their Barques.
A journey into Greece by George Wheler, Esq., in company of Dr. Spon of Lyons - 1682
Passing Lepanto, we came between the promontories Rhium and Antirhium, distant from each other seven stadia, or less than a mile. The strait, which divides them, was five stadia wide. The Christians often invading the Ottoman dominions on this side, Bajazet in 1482 erected castles at the mouth of the gulf. One is called the castle of Romelia, the other of the Morea.
Richard Chandler - An account of a tour made at the expense of the Society of dilettanti - 1775
The narrows between the Gulf of Patras and the Gulf of Corinth are also called the Little Dardanelles. Sultan Bayazet II built a fortress on both sides, which was reinforced by the Venetians in the XVIIIth century. The fortress on the Peloponnesian coast was called Castello di Morea (as the Peloponnese was named during the Venetian conquest), while the fortress on the mainland side of the narrows was called Castello di Rumelia (a synonym for Europe, deriving from the association made by the Arabs between Rome and Europe). Today they are called Castle of Rion (Morea) and Castle of Antirion (Rumelia). 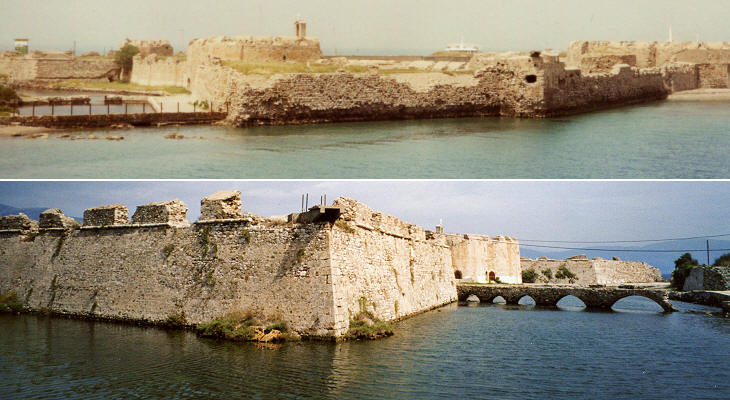 So, January the fifth, we took a Boat, and passed over to the Castle of the Morea, to attend there better Weather; which we did, till we were weary with attending, it being ten or twelve days time: For we had not the Honour to be lodged in the Castle; no Christians whatsoever being permitted to enter into it. But we were forced to make a vertue of Necessity, and content our selves, to take up our habitation in a place not much bigger or better than a Tomb, like the Madman mentioned in the Gospel (As Jesus got out of the boat, a madman from the cemetery came up to him. - Mark 5:1:5). Wheler
We sailed close by the latter, a mean fortress, on a low point of land, much out of repair, with the lion of St. Mark over the gate-ways. Chandler
In 1571 the Christian fleet commanded by Don John of Austria engaged the Ottoman one outside the narrows. The fight which ensued is known as the Battle of Lepanto, a port 5 miles to the east of Castello di Rumelia, and the Ottomans were routed. 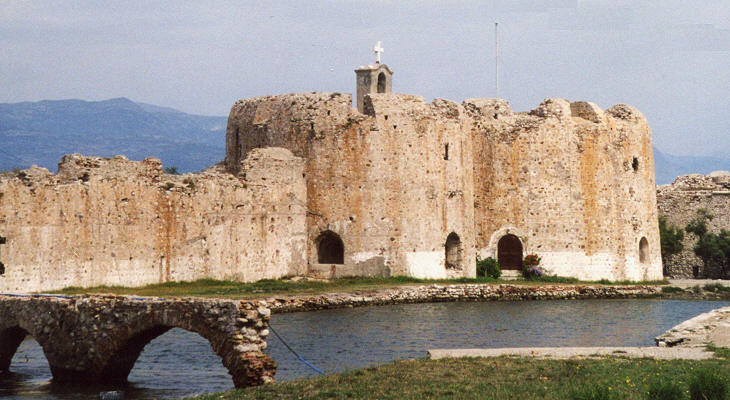 Round towers of Castello di Morea

Castel di Morea shows the enhancements made by the Venetians during their short occupation at the end of the XVIIth century. The fortress was completely separated from the mainland and large circular towers were built to house the guns.
The Venetians hoped that the Ottoman Empire would not have recovered from the effects of the disastrous war which had led to the loss of Hungary and Transylvania to Austria and of Morea to Venice (Peace of Carlowitz, 1699). In 1714 however, the Ottomans, relying on the fact that the growing interests of Austria in Italy (acquisition of the Duchy of Milan, 1713) had weakened their alliance with Venice, invaded Morea. The Venetian fortresses, largely unmanned, fell one after the other before the Austrian intervention in 1716. 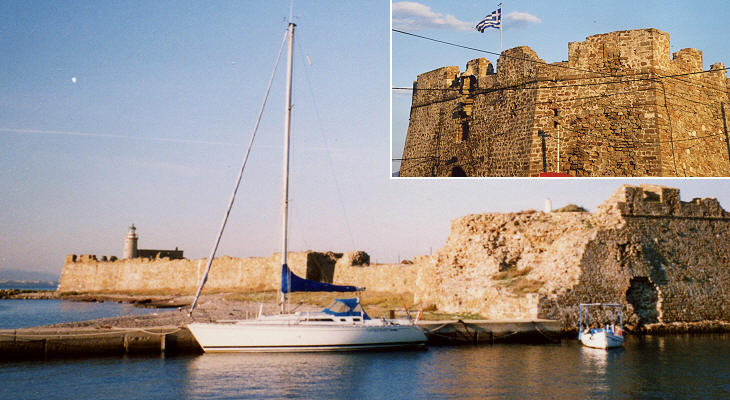 Castello di Rumelia is less impressive than its twin on the other side of the narrows because it was repeatedly dismantled by both Venetians and Ottomans. 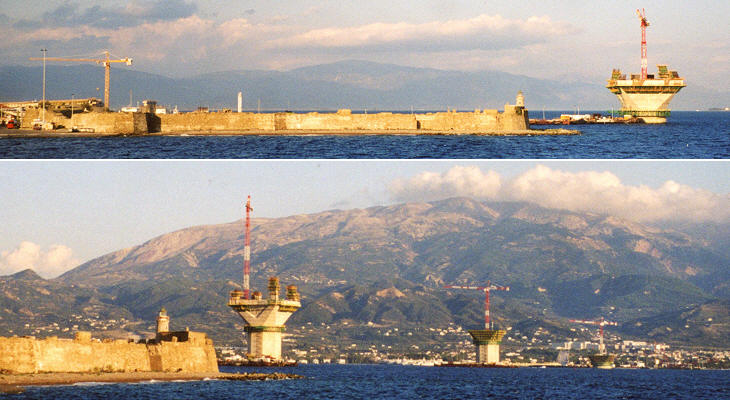 The traffic from Epirus (Ioanina) to Athens, in order to avoid the Pindos Mountains, is channelled southwards through Antirion and Rion: at this location it enters the speedway linking Patras to Athens.

Patras is situated upon an Hill, not above half a Mile from the Sea, at the foot of an high Mountain, which I think was called Cerynea, with a Valley between. It hath a Castle on the highest Point of the Hill, and a Descent every way into a fruitful Valley, well planted with Orange, Limons, and Citrons, so much esteemed for their delicious Taste. Patras was the antient, as well as the modern Name of the Place; and is undoubtedly the same with that of the Romans, being made a Roman Colony by Augustus Caesar, after it had been, for some time, destroyed by more antient Fates. Pausanias telleth. (..) Augustus Caesar, who being moved either with the Conveniency of the Haven, or some other private Reason, commanded the People of sundry Towns round about Patras, to come and abide there: Which that they might more willingly do, he adorned the Place with all the Priviledges of a Roman Colony; calling it Colonia Augusti, Aroa Patrensis, as may be confirmed by divers Medals. Wheler
The conquest of Greece by the Romans in the IInd century BC made Patrasso the gateway between Greece and the West. As usual the town was located on a hill near the sea and it was protected by walls. 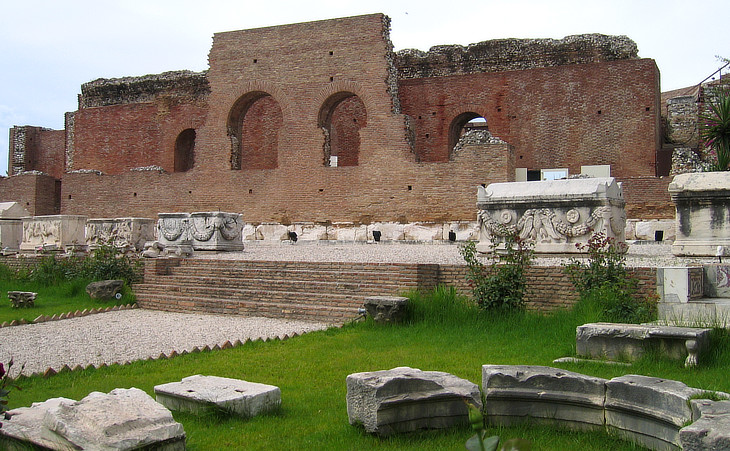 Wall of the Odeon and some ancient Roman exhibits

As to the State of this Town in the Roman times, Pausanias hath given an ample Account; what now remaineth of it, is but little in proportion: Although for that the destroying Turks, undoubtedly, ought to bear the blame, and not the Christians; as may appear from the many ruined Churches, in all its antient bounds: which reached as far as the Sea Westwards; but not so far East: And having still enjoyed the Honour of an Arch-Bishoprick. (..) But we could not find the Theater, nor the Odeum, nor many other Temples, which Pausanias speaks of. Under the Wall of the Town is a Place, that seemeth to have been a Circus, or Stadium, or perhaps a Naumachia for Water Combats. Wheler
The Odeon was identified in 1889; until then it was completely covered with earth. 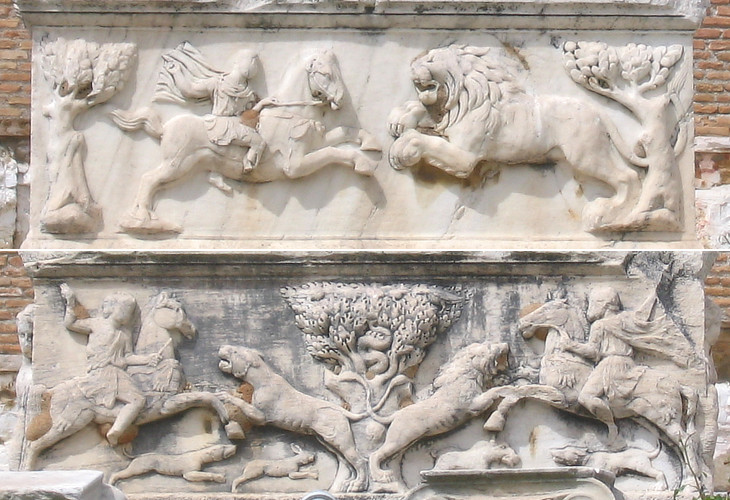 Excavations have brought to light at the foot of the castle and in the environs of the town some very fine sarcophagi. They might have been waiting to be shipped to Rome, because especially in the IInd century AD there was a signicant trade of sarcophagi (you may wish to see a page on this topic or a list of sarcophagi outside Rome). 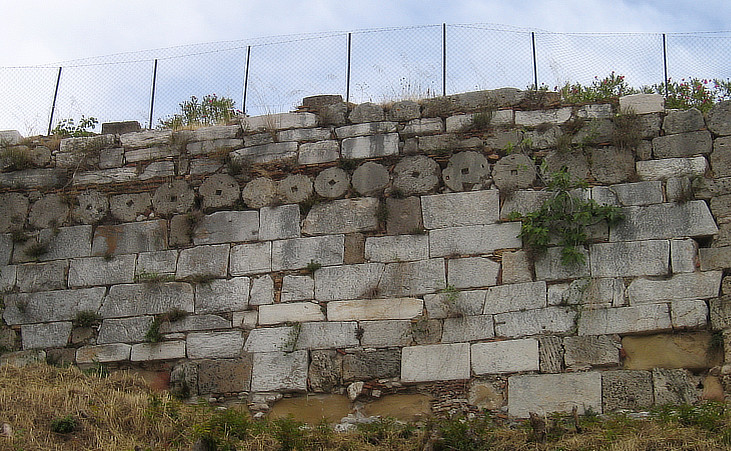 Ancient columns and stones in the wall of the castle

The highest Point of the Hill, whereon the City standeth, hath a Castle kept by the Turks, and commanded then by one Hebby-Bey. Within it formerly were the Temples of Diana Lipathria, and of Minerva Panachaida, or the Protectress of all Achaia. (..) Not far from hence appear some Parts of the antient Walls of the Town: One of those Heaps of Ruins may have been the Temple of Cybele, the Mother of the Gods. Wheler
The walls were built with materials from the Roman buildings; they show many sections of columns, a sign of the number of temples which once existed in the upper town of Patrasso. 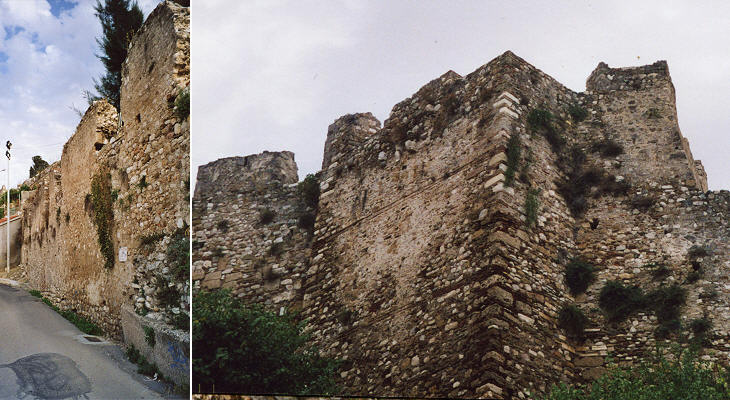 Walls and keep of the fortress of Patrasso

What now remains of the temples in the Castle, I can give no Account; because we were not permitted to enter into it. Pausanias speaketh of many more, in the Market-place. Wheler
Patras has been often attacked by enemies, taken, and pillaged. (..) We found nothing remarkable in the citadel. Chandler Leaving the Town on the left hand, we passed by the Castle on our right; which is not much considerable, either for Beauty or Strength; having only one round Tower toward the Sea, a broadside towards the Town, and ditch'd round about. Wheler
The current fortress of Patrasso is the composite result of the additions and modifications made by Byzantines, Franks, Ottomans and Venetians during 15 centuries. Both the Ottomans and the Venetians strengthened the fortress by adding round towers. 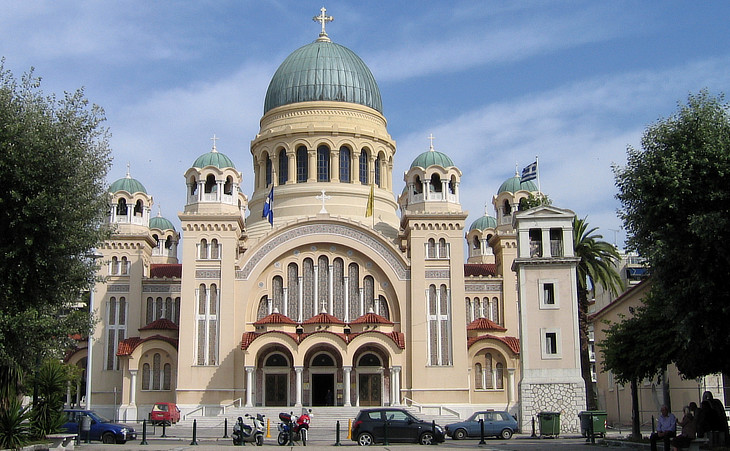 The modern church of St. Andrew's which houses the head of St. Andrew. You may wish to learn more about this relic which was returned from Rome to Patras in 1966

They report of St Andrew, That he staid a great while at Patras; and that before he suffered Martyrdom there, he converted a King of the Morea; meaning, perhaps, no more than some Roman Governour of that Province. (..) Not far thence is the Foundation of a Church, dedicated to St Andrew; where they believe, that the Apostle baptized the King he had converted to the Faith. Wheler
Near the sea there is a large uninhabited convent, where, they say, they have the body of St. Andrew in a stone tomb, to which they pay great devotion, and shew a little cell near the church, which is half under ground, where, they say, the Apostle lived, who converted these people to Christianity, and was martyred here at a place they pretend to shew on a raised stone work about thirty feet square.
Richard Pococke - A Description of the East and Some Other Countries - 1745

You may refresh your knowledge of the history of Venice in the Levant by reading an abstract from the History of Venice by Thomas Salmon, published in 1754 (the Italian text is accompanied by an English summary) or you may wish to read excerpts (in Italian) from Memorie Istoriografiche del Regno della Morea Riacquistato dall'armi della Sereniss. Repubblica di Venezia printed in Venice in 1692 and related to the Castles or Patrasso.