April 26, 1805. The harbour and island of Navarin, the ruined castle of Paleo Navarino, and a corner of the fortress of Neokastro, now become visible. (..) Pausanias wrote: "There is a road, of not more than a hundred stades in length, from Mothone to the promontory Coryphasium, upon which Pylus is situated; this city was founded by Pylus, son of Cleson, but who, having been soon driven out by (..) Neleus, went to the neighbouring country of Eleia, and there founded another Pylus. (..) Here is a temple of Minerva Coryphasia and a house named the House of Nestor, which contains a picture of him.
William Martin Leake - Travels in the Morea - 1830
The current name of the town, Pylos, is associated with the wise King Nestor who participated in the hunting of the Calydonian boar and in the War of Troy. 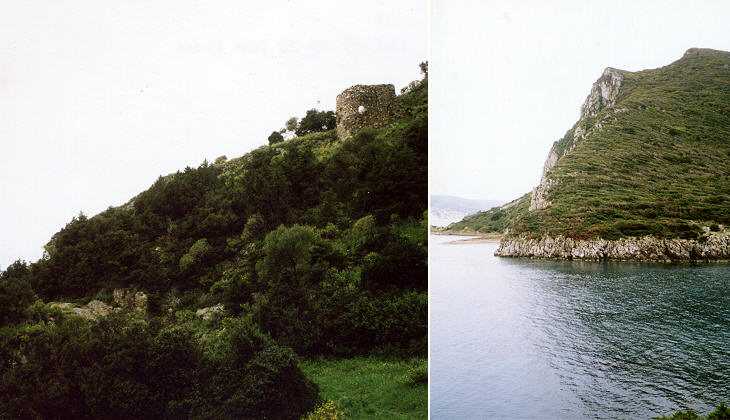 (left) Ruins of Paleo Navarino, the old fortress; (right) the narrow northern entrance to the bay of Navarino

The promontory Coryphasium, a precipice towards the lagoon, is crowned with the ruins of a fortress or castle of the middle ages, called Paleo-Navarino (..) a form of the name, more Italian than Greek. Below the ruined fortress on the northern side, at the bottom of the cliffs, there is a (..) small circular port. (..) The situation of the Pylus of Neleus and his successors, appears to have been a much disputed question in the time of the Roman Empire. Strabo quotes a proverbial verse to shew that there were three Pyli near the western coast of the Peloponnesus. (..) The chief objection to Paleo Navarino as the site of a capital city, is the scarcity of water. (..) It may, perhaps, have been one reason why Pylus never flourished as a city, except during the Neleian dynasty. Leake
(1805) The remains of Navarino Vecchio consist in a fort or castle of mean construction, covering the summit of a hill sloping quickly to the south, but falling in abrupt precipices to the north and east. The town was surrounded by a wall, which, allowing for the natural irregularities of the soil, represented a triangle, with the castle at the apex or summit. (..) We were unable to find any squared blocks of stone or marble, the usual indications of the existence of more ancient cities.
William Gell - Narrative of a journey in the Morea - 1823
The Franks built on the site of the acropolis of ancient Pylus a small fortress, which lost its importance in 1573 when the Ottomans, after the defeat of their fleet at Lepanto in 1571, built a new fortress (Neokastro) at the southern entrance to the bay. 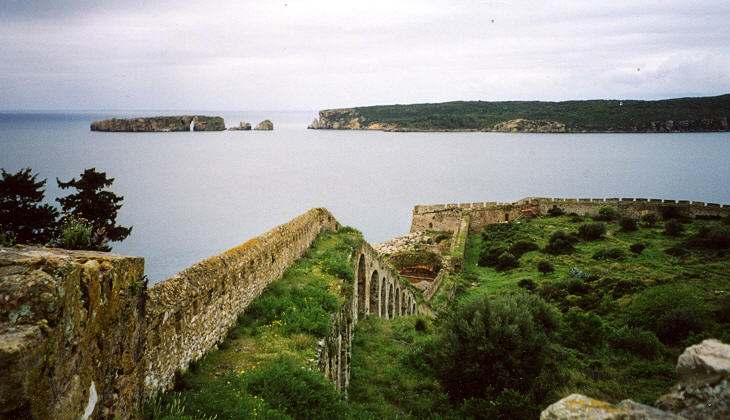 The southern entrance to the bay, which was known also as is il Zonchio by the Venetians, and the island of Sfacteria seen from Neokastro

April 27. I employed the whole of this day in examining the island of Navarin, anciently called Sphacteria, making a tour of it in a boat, and then walking over it on foot; (..) Sphacteria has been made known to all the world, by the defeat of the Lacedaemonians in 425 BC; in memory of which event the Athenians erected a statue of Victory in the Acropolis. (..) The castle stands on a cape, projecting towards the southern end of Sphacteria off which there is a rock, called, from the tomb of a Turkish saint upon it, Delikli-baba. Between this rock and the fortress is the entrance into the bay of Navarin, a noble basin, with a depth of water from twelve to twenty passi. Leake
This island has been separated into three or four parts by the violence of the waves, so that boats might pass from the open sea into the port, in calm weather, by means of the channel so formed. Gell
The bay of Navarino, the largest natural harbour in the Peloponnese, is closed by Sfacteria, a long and narrow island, parallel to the coast. Initially the Ottomans built two small bastions facing the sea where they placed their artillery. Later on they fortified the hill above the bastions with a citadel and built long walls linking the citadel to the bastions thus creating a large fortified area for the development of a town. 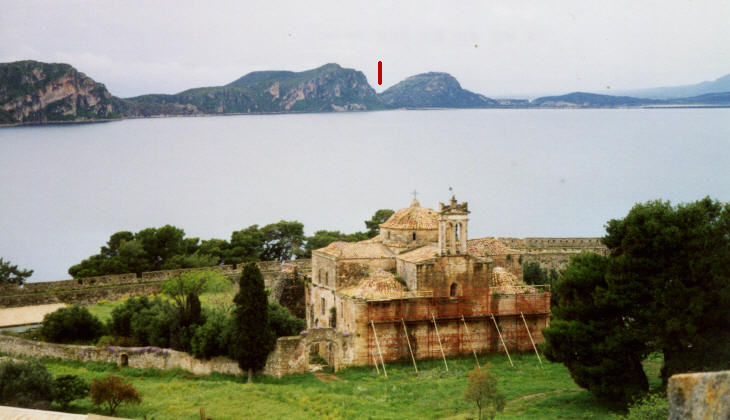 The bay from Neokastro: the red line marks its northern entrance where Paleo Navarino is situated

Edris Bey the commandant, whom I visit to-day in the fortress, is a young Starnbuli, or Constantinopolitan, who, having spent the greater part of the property left him by his father, (..) was glad to sacrifice the remainder in obtaining this government, though, with all his efforts, its profits are small. (..) There are about 300 Turkish families in the fortress, most of them in a wretched state of poverty. (..) Ships generally anchor at about a third of a mile from the skala, where they are sheltered by the point of the castle; or behind the island of Marathonisi which lies a little northward of the centre of the harbour. (..) On the side towards the sea, where it ought to be strongest, the fortress has received only a miserable patching since it was battered by the Russians from the island, in the year 1770. Leake
The walls protect a very large area. The mosque (which had a minaret), now a church, repeatedly changed its function, depending on who was master of the fortress. 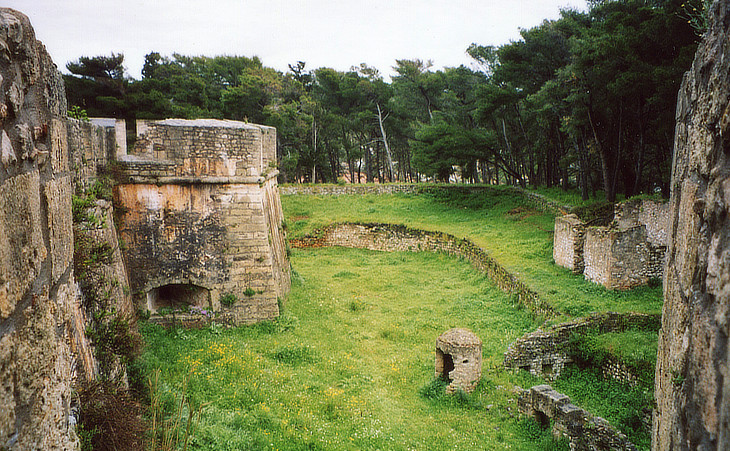 Bastion with evidence of a ditch and an outwork

During their occupation (1686-1714) the Venetians strengthened the citadel by building five bastions and a large walk-way along the walls with a ramp to allow easy access to it. 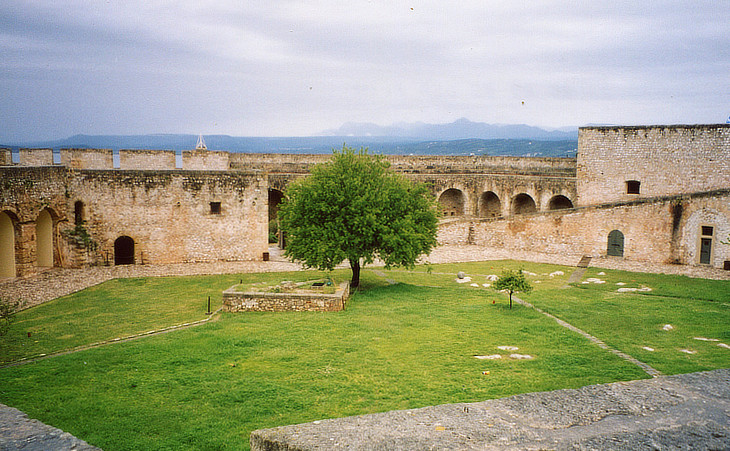 In 1714 however the Venetians preferred to abandon the fortress and to concentrate their troops in Modon. 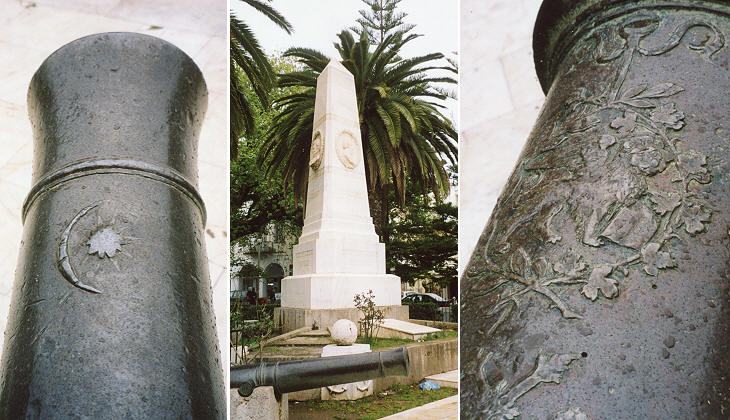 Monument to the Admirals

In 1821 the insurgent Greeks seized the fortress, but in 1825 Ibrahim Pasha, son of Muhammad Ali, governor of Egypt, dislodged them. Today Navarino is chiefly known for the naval battle which took place on October 20, 1827 between the allied fleets of the Great Powers (France, Britain and Russia) supporting the Greek fight for independence and the fleet of Ibrahim Pasha who helped the Sultan to crush the rebellion. The monument in the main square of the modern town outside the fortress is dedicated to the three admirals (de Rigny, Codrington and Geiden) who defeated the Egyptians and forced them to leave the fortress in September 1828. It is embellished by two guns, one of which is Ottoman and the other Venetian (you may wish to see some highly decorated Venetian guns at Nauplia). 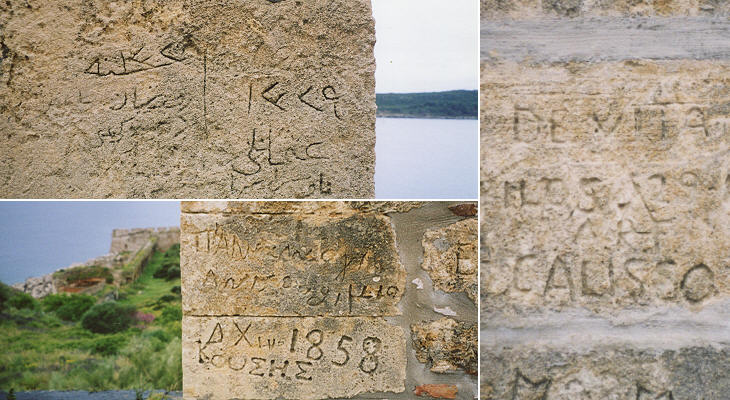 Life in a fortress waiting for the enemy to arrive can be pretty boring and lead a man to believe his life is senseless. This feeling was shared by all the occupants of the fortress who felt the need to leave a sign of their existence by carving their names on the walls of the fortress (the Italian name relates to the Italian occupation of the fortress during WWII).

The fortress of Calamata

We now enter the olive and garden grounds which surround Kalamata. (..) The town is situated at about a mile from the sea, on the left bank of a torrent, which emerges from a rocky gorge in Mount Taygetum, at the distance of a mile to the north-eastward of a hill rising from the back of the town. This height is crowned with a ruined castle of the middle ages, and is naturally strengthened by a perpendicular cliff. Leake
In 1986 Kalamata, a flourishing town renowned for its olives, was hit by a major earthquake which caused at least 120 deaths. The castle built by the Villehardouin in 1208 showed that the building techniques of the past were more reliable than the modern ones.

Outer (left) and inner (right) entrances to the fortress

The advantageous situation of the castle-hill on the bank of a river, at a small distance from the mountains and near the head of this great gulf, is such as could not have been overlooked by the ancient Greeks; upon this foundation alone, we might presume it to be the site of one of the maritime cities of the Messeniac gulf in the time of the Trojan war. (..) I could not succeed in finding any vestiges of Hellenic antiquity at Kalamata. Leake
The original castle was enlarged with the addition of a wall curtain on its southern side; although this section looks more solid it does not show major evidence of being upgraded to the needs of artillery warfare. The Venetians were not very interested in this mainly agricultural town and they just strengthened the gate tower of the outer ward and placed a winged lion on it. They did the same at the entrance to the inner ward. The castle was used as a barracks until the early XXIst century. 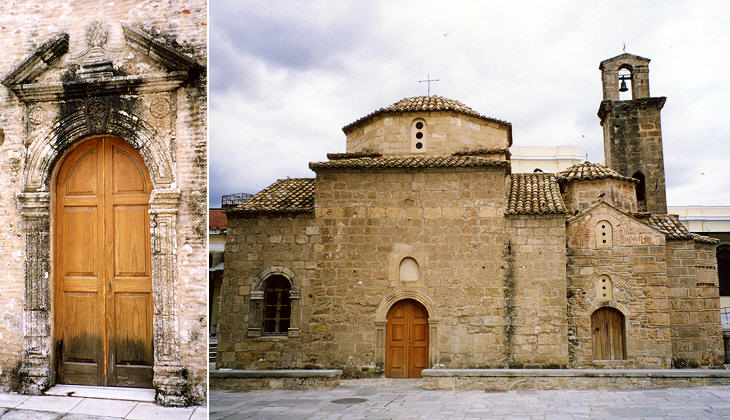 The first object that strikes the traveller on entering Kalamata, is the ruined mansion of Benakhi, which, like that of Krevata at Mistra was destroyed by the Turks after the insurrection of 1770, in which the heads of those two Greek families took a part. The son of Benakhi is now Russian Consul at Corfu, and still enjoys the rents of a considerable estate here, which are collected by a married sister, living in the town. (..) The ceremony of the Entombment occurs this morning, at two hours before day; the people come out of their houses in the dark, and scramble to light their candles at the priest's candle. There is then a procession, consisting chiefly of women, through the streets to the church. Kalamata is the only town in the Morea, inhabited by Turks, where the Greeks can perform this ceremony; which generally takes place within the walls of the church or monastery. (..) Kalamata contains 400 families, of which only six are Turkish. The government is in the hands of the chief Greeks, and the voivoda is readily removed upon any complaint of theirs. Leake
The account by Leake helps in understanding why Aghii Apostoli, an old Byzantine church, (and more in general Kalamata) is very important in modern Greek history; it was one of the sites where the uprising of the Peloponnese was announced in March 1821. It was a tiny chapel (right part of the building) which was enlarged during the Venetian occupation (left part of the building and major dome).

The Messenian Gulf seen from the fortress: to the left the peninsula of Maina; to the right that of Corone

You may refresh your knowledge of the history of Venice in the Levant by reading an abstract from the History of Venice by Thomas Salmon, published in 1754 (the Italian text is accompanied by an English summary) or you may wish to read excerpts (in Italian) from Memorie Istoriografiche del Regno della Morea Riacquistato dall'armi della Sereniss. Repubblica di Venezia printed in Venice in 1692 and related to Navarino and Calamata.