(July 1675) We found our selves next morning in the same Gulph still opposite to Corone. But a moderate gale arising with the Sun, not long after we doubled the Cape Metapan, called in old time Promontorium Taenarium. The Bay beyond it is called Brazza Di Magnio, from the City Magnia, situated at the bottom thereof. The Magnoti, who are the Inhabitants of that Country, are famous Pirates by Sea, and Pestilent Robbers by Land. They have always bravely defended themselves against the Turks, and maintained their Liberty, till lately by this stratagem the Turks were too hard for them. They got their consent to build two Forts upon their Coasts; which they did so advantageously, as soon made them Masters of their City, and them. And now none of them are exempted from paying Tribute, but a few in the Mountains. (..) They are naturally such Thieves, that when any Vessel cometh into their Harbour, they will go by night, and cut the Cables of their Ships, when they can find nothing else to lay hold of; which sometimes endangers the Vessels running a shore, when not discover'd in time. Some Mariners of this place, that were on board of us, gave us this account of their Country, with many diverting Stories of the same nature; which they glory in.
A journey into Greece by George Wheler, Esq., in company of Dr. Spon of Lyons - 1682

The part of the Morea called Maina, from a town of that name, is divided into the upper and lower, from which the inhabitants have the name of Maniots, living among those inaccessible mountains, which are the antient mount Taygetus, where they have always preserved their liberty. To each part they have a captain or head, and these are generally at war with one another, and sometimes a pretender sets up, and causes a civil war. The upper Maina is to the west of the river Eurotas; the inhabitants of this part are the more savage people, and come little abroad; those of the lower Maina near to Calamita are more civilized, go abroad to Calamita, and pay only a small poll tax when they are caught out, but the people dare not injure them. (..) They go into the neighbouring parts, and, labour the land for a proportion of the produce, and will pay nothing to the grand Signor (the Sultan).
Richard Pococke - A Description of the East and Some Other Countries - 1745
The long peninsula of Maina (today Mani) has the appearance of a finger; Cape Matapan which is located at its end is the southernmost point of Morea. The access to the peninsula from the western province of Messenia is barred by Mount Taygetus: it is more accessible from the eastern province of Laconia, but the end of the peninsula is very difficult to reach by land. Helped by these geographic factors its inhabitants often refused to comply with the Ottoman taxation system and developed some form of self government under the Mavromikhalis family.

The Mani Peninsula seen from the beach of Calamata at sunset

The peninsula itself had little relevance to both Turks and Venetians with the exception of a natural port, Braccio di Maina, near Cape Matapan which controlled the route between the Ionian and the Aegean Seas (one of the most important naval battles of WWII was fought at Cape Matapan).
Calamata in Messenia is the best starting point for a tour of the northern part of the peninsula and Githio in Laconia for the southern one.

(April 1805) Mani is divided into three parts; Outer, Lower, and Inner. The first contains the western coast between the frontier of Kalamata on the north, to Port Vitylo on the south, together with the interior as far as the summits of Taygetum. (..) Zarnata borders on Kalamata, and lies between the sea-shore and the summits of Taygetum. (..) Passava, Maini, Kelefa, and Zarnata in Mani were all, I believe, originally constructed by the Byzantine princes, to keep these mountaineers in order, and were for the last time repaired, about 100 years ago, by the Venetians, when they were in possession of the Morea.
William Martin Leake - Travels in the Morea - 1830
The Venetians were so happy at having conquered Morea in 1685 that in the following years several books were printed to celebrate the event and illustrate the landmarks of the new province, or rather Kingdom as Morea was formally called Regno di Morea.
Vincenzo Coronelli, a famous Venetian historian and geographer, published a series of views and plans of the fortresses of Morea. He mainly relied on sketches made by the local Venetian commanders, especially for those fortresses which had not been originally built by the Venetians.

The harbour consists of five or six magazines and two pyrghi, and to the north of that of Peter Mavromikhali there is a monastery with a little garden about it. Farther north the harbour branches to the eastward as far as the foot of the hill, on which stands the ruined fort of Kelefa. (..) Porto Vitylo resembles exactly one of the creeks which I have described on the precipitous coast to the southward, but on a much larger scale: the narrow entrance, bold rocky shores, depth of water, and extent inwards, are of the same character. Leake

It is said to be of Venetian construction, but could only have been a repair or reconstruction of the original fortress, as both Kelefa and Zarnata existed before the Venetian conquest, and were taken by them from the Turks in the year 1685. Leake
The fortress of Chielefà was built by the Ottomans to enforce their rule in the region and to prevent the inhabitants of Maina from raiding towns and villages outside their territory. In addition the guns of the fortress controlled Porto Vitulo, a bay on the western coast of Maina, where the Venetians often set anchor. In 1685 the Ottoman garrison capitulated to the Venetians without fighting; in 1715 it was the turn of the Venetians to surrender Chielefà. The fortress did not prevent the uprising of Maina in 1770; the rebels were able to reach and conquer Mistrà. 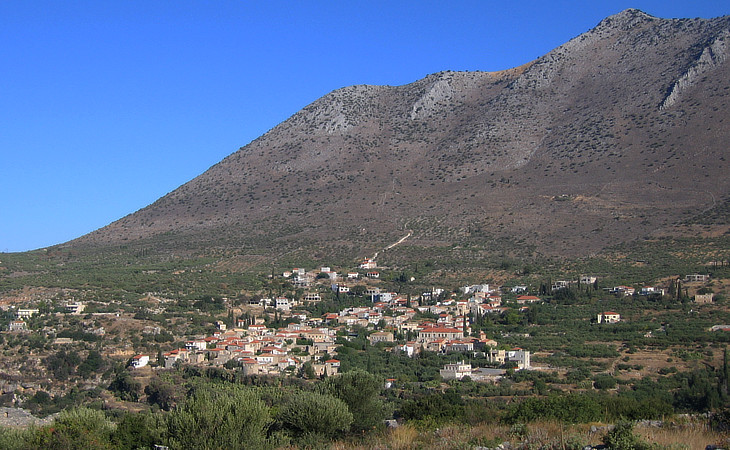 Vitulo (Oitylo); the image used as background for this page shows another rugged mountain of Mani

Northward of the eastern branch of the harbour, on the brow of a steep hill, which descends to the northern shore of that branch, stands the town of Vitylo, said to contain 250 houses. (..) The sides of the mountain around Vitylo, and particularly below the town, are green with terraces of corn. The Vityliotes being opposed to the present bey, I am unable to visit the place where I believe some remains of the ancient Oetylus are still to be seen. Leake 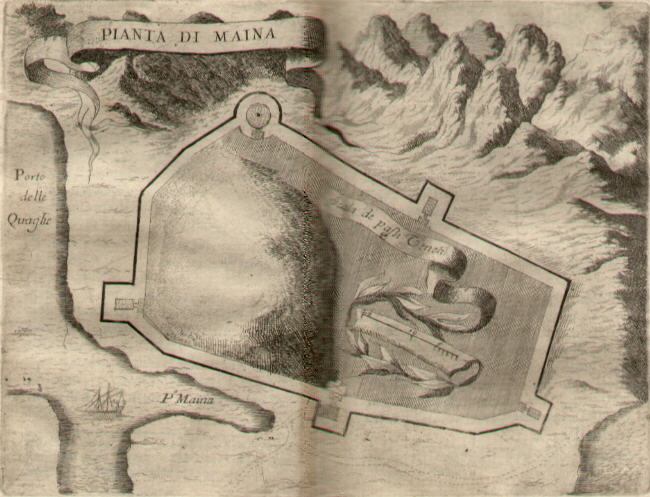 Beyond the ravine of the garden of the monastery, to the eastward, another root of the mountain, slopes into the sea. On its summit stands the ruin of a square fortress, apparently of the same period as that of Passava, but more respectable. Coronelli has given a description of it under the name of the fort of Maina. (..) It was a town in the thirteenth century; (..) it would seem, indeed (..) to have been then one of the chief places in the southern part of the peninsula. Maini is still nominally one of the suffragan dioceses of the ecclesiastical province of Monemvasia. The Italians translated the word into Maina, and thence called the whole of the great Taygetic promontory Braccio di Maina. From the same word the Greek chorographical appellation Maini is derived. Leake
The map of Braccio di Maina by Coronelli gives a very simple sketch of the fortress, but the rugged mountains surrounding it are an attempt to represent the wilderness of the area. Braccio di Maina had two natural harbours, one of which (Porto delle Quaglie or Porto Quaglio) was named after the quails, as these migratory birds crossed the Mediterranean between the coasts of Libya (Cirenaica) and Cape Matapan. The reference survives in the current Greek name Porto Kayio of the site.

I ascend on foot the hill of Passava, which resembles that of the castle of Mistra, but with less than half its dimensions. The summit is occupied by a ruined fortress, consisting of a battlemented wall, flanked with one or two towers, and without any ditch. Within are the remains of gardens and houses, and the ruins of one building of larger size. In the eastern wall, towards the southern end, I find a piece of Hellenic wall, about fifty paces in length, and two-thirds of the height of the modern wall. Leake
The name of this fortress derives from Passe avant (go ahead), the motto of the French Baron Jean de Neuilly, who is thought to have built it in the XIIIth century: at times the fortress was abandoned, but in 1669 the Ottomans garrisoned it to protect the port of Githio from being raided by the inhabitants of Maina.

We cross the valley of Gythium, leaving its ruins on the right; then ascend the side of the bare rocky hill, on the foot of which is situated the town of Marathonisi which consists of 100 wretched houses of mud-brick, in the midst of which stands a large church, with the proud distinction of a spire and bell; higher up the hill they are building a tower for Andon, the present Bey of Mani. (..) The principal inhabitants of Marathonisi are relations or agents of the chief Greeks of Mistra. (..) The remains of Gythium called Paleopoli, are situated in a valley terminating in the sea. (..) The town was situated on some low hills, in a small triangular piain, inclosed between them and the sea. (..) Ninety yards inland from the shore are the remains of a theatre. (..) There are several pieces of the displaced seats on the side of the hill which supported the theatre. (..) Behind, on the eastern side of the principal height, I observe several remains of buildings in the Roman style, with tiles and mortar, and some with courses of rough stones between layers of mortar. (..) There are also the remains of some baths. Leake
Gythium was the harbour of ancient Sparta and a centre of purple dye trade during the Roman Empire. In Byzantine times the harbour was moved to nearby Marathonisi (today's Githio). It is now an important port and a tourist resort.

You may refresh your knowledge of the history of Venice in the Levant by reading an abstract from the History of Venice by Thomas Salmon, published in 1754 (the Italian text is accompanied by an English summary) or you may wish to read excerpts (in Italian) from Memorie Istoriografiche del Regno della Morea Riacquistato dall'armi della Sereniss. Repubblica di Venezia printed in Venice in 1692 and related to Zarnata, Chielefà, Passavà and Maina.