In the VIIth century the followers of Prophet Muhammad conquered southern Syria, but they did not impose Islam on the region and its Christian inhabitants were allowed to continue to profess their faith; in the following centuries however the Christians were gradually deprived of their churches which were turned into mosques; in the XIIIth century, as a consequence of the wars waged by the Mamelukes against the Crusader States in Syria and Lebanon, the living conditions of the remaining Christian communities worsened and in all towns they became a minority group. In some areas of the region, however, a few villages, due to their isolation, continued to be inhabited by a sizeable Christian community. 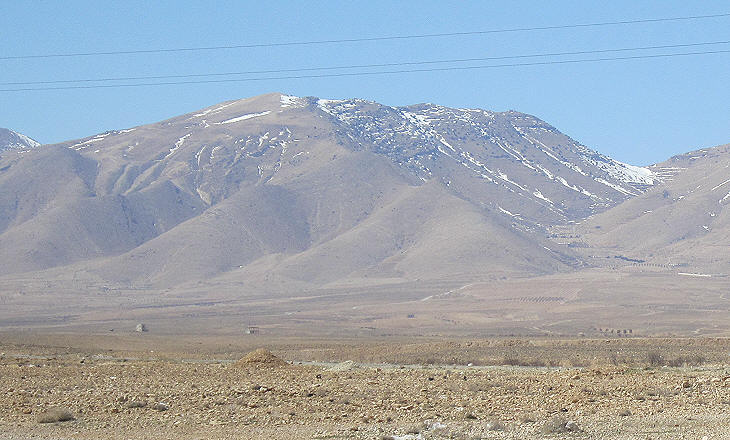 The region where many of these Christian communities survived is a tableland north-west of Damascus, called Qalamoun, which is part of the Anti-Lebanon Mountains; here some communities have continued to speak Aramaic, the language of Jesus Christ, until a few decades ago.
The Anti-Lebanon mountains were known for their forests of cedars and along their slopes archaeologists have found traces of canals dug by the ancient Romans to carry water to mills located on the tableland which was intensively farmed. Today the landscape is barren, also owing to a long period of drought which has made the region even more inhospitable. 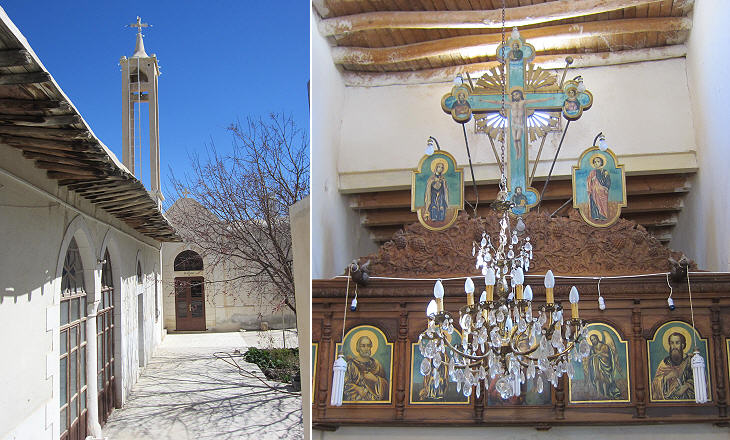 I set out from Damascus for Aleppo, having hired a young janizary to go with me. (..) We had to the west the high mountains, which are east of the plain of Baalbeek. About an hour (..) is the village of Caraw; (..) it is finely situated on a hill, on which there seemed to have been a camp: I was told, that it was called Carinthia when the Franks had possession of it. I saw in the kane some niches with angular pediments over them, which might be the remains of a church. To the north east is a hill with a watch tower on it, so that probably those towers extended to Palmyra; (..) there were two or three Christians at Caraw who came to see me: We stayed here till night.
Richard Pococke - A Description of the East and Some Other Countries - 1745
Qara (or Qarah) is a small town, not far from the national road which links Damascus to Hama and Aleppo; today it is largely Muslim with only a small Syro-Catholic community; the church dedicated to Sts. Sergius and Bacchus apparently does not retain any evidence of having been founded more than a thousand years ago. Saints Sergius and Bacchus were two Roman soldiers who lost their lives to profess their faith; military saints were very popular in the Early Christian Church; although some of them are usually portrayed while suffering martyrdom (e.g. St. Sebastian), in general their iconography shows them as victorious knights; Sergius and Bacchus were regarded as the protectors of the Byzantine army: one of the largest churches of Constantinople was dedicated to them. 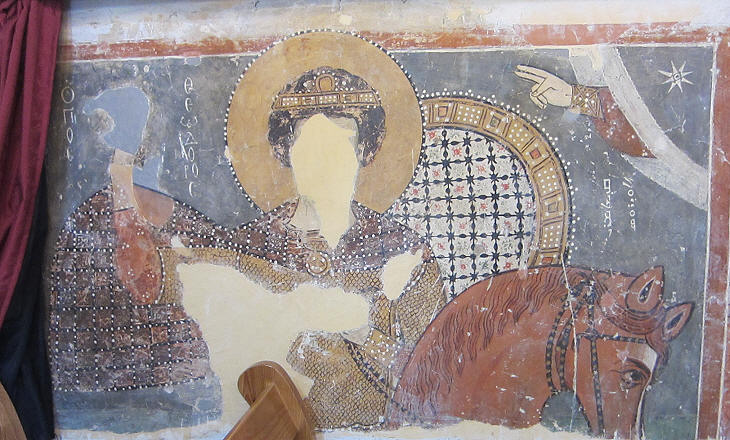 St. Theodore (see his statue in Venice); the blessing hand is shown in the image used as background for this page; it is often depicted in medieval churches, e.g. at S. Zeno in Verona

Only when the warden pulls a curtain one can see some frescoes on a wall which bring the viewer back to the XIth century, when Qara was a Christian town.
St. Theodore was another popular military saint; according to two different traditions he was either a general (Theodore Stratelates) or a recruit (Theodore of Amasea); the fresco however does not portray an ancient soldier, but a medieval Byzantine knight, whose actions are blessed by God.
The face of the saint has been erased, possibly this occurred in 1266 when Mameluke Sultan Baibars who is known for having seized Krak des Chevaliers, a key Crusader fortress, evicted the Christians from Qara. 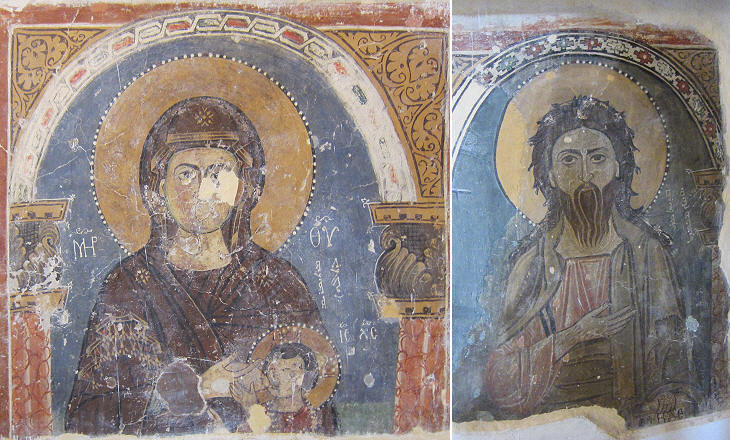 The Mamelukes however did not damage the frescoes portraying the Virgin Mary and St. John the Baptist who both are revered by Muslims; St. John in particular had many devotees in southern Syria, as his head was a key relic in the Great Mosque of Damascus. 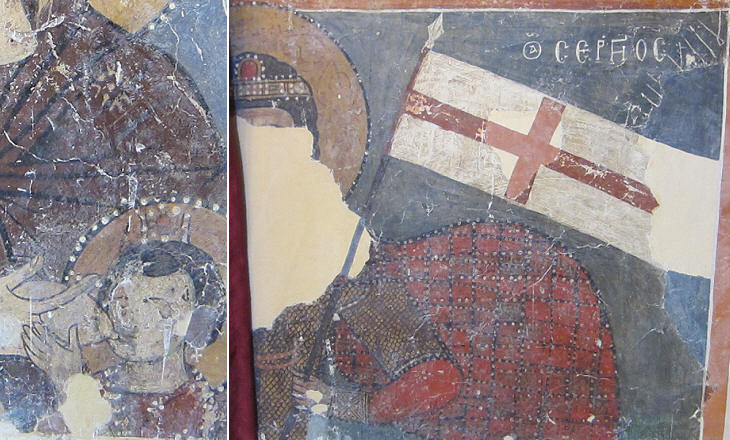 The fresco portraying St. Sergius is badly damaged, but it shows the richly decorated caparison of his horse; in Europe caparisons were mainly worn in tournaments to make the event more spectacular, but they were used by the Crusaders in their campaigns in the East, where the practice of protecting horses with an armour or a heavy caparison was developed by the Parthians and then became a typical feature of the Byzantine army. 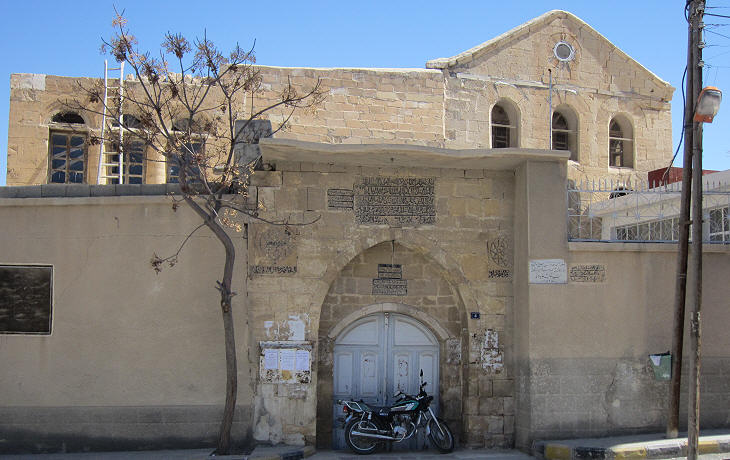 Sultan Baibars turned the main church of Qara into a mosque; the building retains an interesting Byzantine façade the design of which is similar to that of the Great Mosque of Damascus, albeit at a much smaller scale. 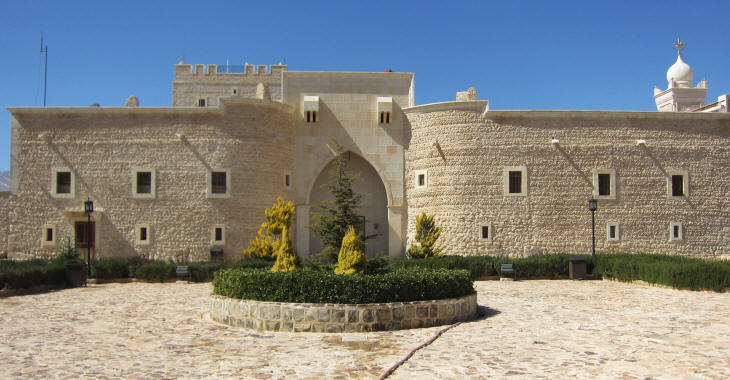 I was informed, that a league west of Caraw there was a convent called Der-mar-Jacob, which is now entirely ruined. Pococke
St. James' convent is located in the outskirts of Qara; it was built on a previous Roman fort and it was protected by a large tower. It was almost completely ruined when in 1995 Mother Agnès-Mariam de la Croix, a Carmelite nun from Lebanon, founded a small community open to Christians of different churches; it is dedicated to St. James Intercisus, a Persian saint who was cut into 29 pieces and still survived; he is regarded as a symbol of the unity of the Church.
The design of the mostly modern buildings which make up the complex reflects local architectural patterns. 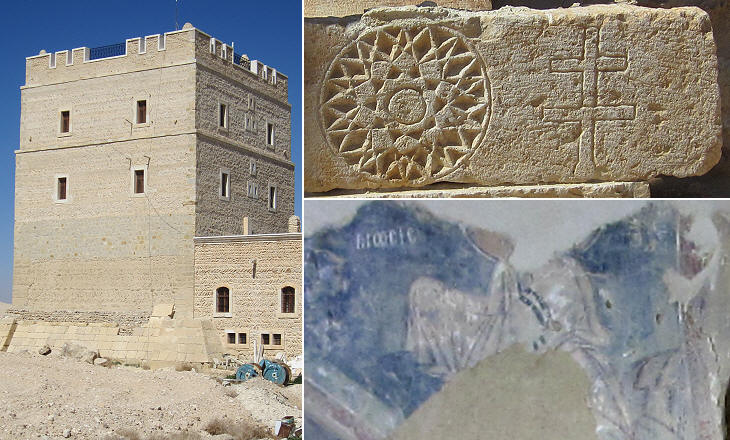 St. James' convent: (left) the tower; (right-above) an old lintel; (right-below) fragment of a fresco in the crypt