Brutus' tent
Brutus
Messala, I have here received letters,
That young Octavius and Mark Antony
Come down upon us with a mighty power,
Bending their expedition toward Philippi.
(..) Enter the Ghost of Caesar
Art thou some god, some angel, or some devil,
That makest my blood cold and my hair to stare?
Speak to me what thou art.
Ghost
Thy evil spirit, Brutus.
Brutus
Why comest thou?
Ghost
To tell thee thou shalt see me at Philippi.
William Shakespeare - The Life and Death of Julius Caesar - Act IV - Scene 3 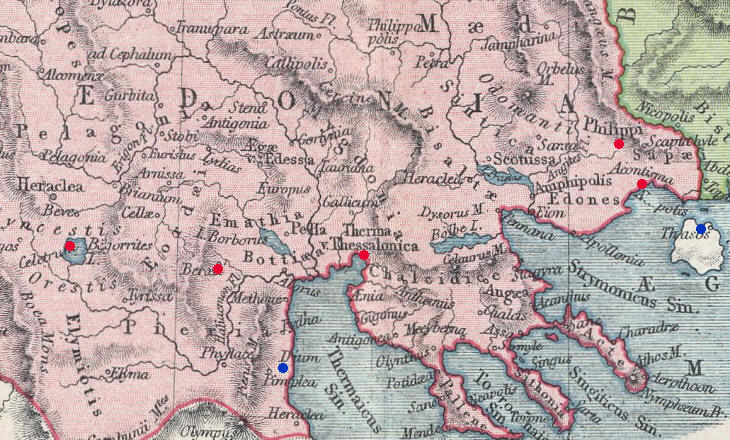 Map of Macedonia during the Roman Empire: Celetrum=Kastoria, Berea=Veria, Thessalonica, Philippi, Neapolis=Kavala are covered in this section; Dium=Dion and Thasos are covered in other sections

In 168 BC the Romans defeated Perseus, King of Macedonia, at Pidna and in 148 they established their direct rule over Macedonia, which became a strategic territory for the expansion of the Roman Empire in the Eastern Mediterranean region. The Romans built Via Egnatia, a road which from the Adriatic coast of today's Albania reached Thessalonica on the Aegean Sea, to speedily move their legions across the mountains of northern Greece; the road was extended eastwards towards Philippi and Byzantium. 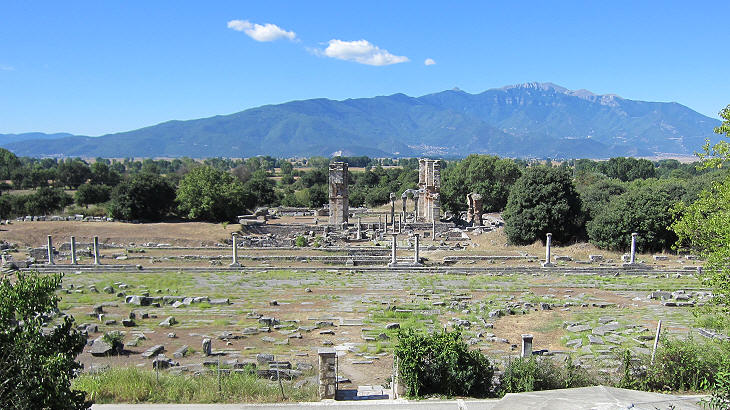 There were not less than six or seven fountains upon one spot, shaded by large plane-trees. Here we were not far distant from the ruins of Philippi. (..) From the heights we had a fine view of a noble plain, flat as the surface of a lake, surrounded by high mountains. (..) The plain is surrounded in the manner here described; having the highest ridges of auriferous Pangeus towards the east, Mount Scomius towards the north, and Mount Cercina upon the west. (..) The most copious and minute description of Philippi is afforded by Appian, (and of the exact situation of the camps of Brutus and Cassius); every word of which ought to be present to those who may hereafter visit the ruins of that city.
Edward Daniel Clarke - Travels in various countries of Europe, Asia and Africa in 1799-1804
Philippi is a city that was formerly called Datus, and before that Crenides, because there are many springs bubbling around a hill there. Philip fortified it because he considered it an excellent stronghold against the Thracians, and named it from himself, Philippi. (..) On the south is a marsh extending to the sea (..) and on the west a very fertile and beautiful plain. Here it is said that Persephone was carried off while gathering flowers.
Appian - The Civil Wars - Book IV - Loeb Classical Library
In 360 BC, colonists from Thasos, founded a town which they called Krenides (springs) from the abundant springs at the foot of the hill where they settled. It was renamed Philippi by Philip II, King of Macedonia and father of Alexander the Great. The town controlled a strategic passage and was located near gold mines. 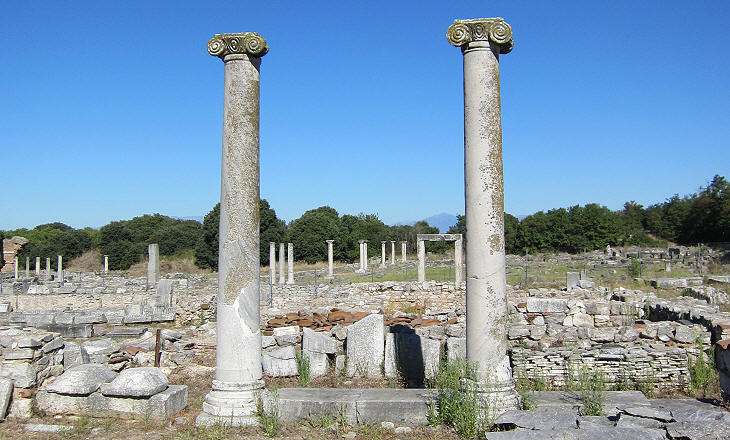 How vengeance overtook Cassius and Marcus Brutus, who were the principal leaders in the conspiracy against Caesar, and who controlled the territory from Syria to Macedonia, and had large forces of cavalry and sailors, and more than twenty legions of infantry, together with ships and money, this fourth book of the Civil Wars will show. (..) Brutus and Cassius by an astonishing act of audacity advanced to Philippi and the whole army was there assembled. (..) Antony's audacity confounded the enemy when they saw him pitch his camp so near them and in such a contemptuous manner as soon as he arrived. He raised numerous towers and fortified himself on all sides with ditches, wall, and palisade. The enemy also completed their fortification wherever their work was defective. (..) There were nineteen legions of infantry on each side, but those of Brutus and Cassius lacked something of being full, while those of Octavian and Antony were complete. Of cavalry the latter had 13,000 and the former 20,000, including Thracians on both sides. Thus in the multitude of men, in the spirit and bravery of the commanders, and in arms and munitions, was beheld a most magnificent display on both sides. (..) Cassius could not see accurately on account of the dust, nor could he see everything, but only that his own camp was captured; he ordered Pindarus, his shield-bearer, to fall upon him and kill him. While Pindarus still delayed a messenger ran up and said that Brutus had been victorious on the other wing, and was ravaging the enemy's camp. Cassius merely answered, "Tell him that I pray his victory may be complete." Then, turning to Pindarus, he said, "What are you waiting for? Why do you not deliver me from my shame?" Then, as he presented his throat, Pindarus slew him. (..) Then Brutus said to his friends, "I am no longer useful to my country" and calling Strato, the Epirote, who was one of his friends, gave him the order to stab him. While Strato still urged him to deliberate, Brutus called one of his servants. Then Strato said, "Your friend shall not come short of your servants in executing your last commands, if the decision is actually reached." With these words he thrust his sword into the side of Brutus, who did not shrink or turn away. (..) Once when Brutus was about to cross from Asia to Europe with his army, and while he was awake at night and the light was burning low, he beheld an apparition of extraordinary form standing by him, and when he boldly asked who of men or gods it might be, the spectre answered, "I am thy evil genius, Brutus. I shall appear to thee again at Philippi." And it is said that it did appear to him before the last battle. (..) It was due to something more than human, no doubt, that (..) although they had participated in many engagements, they never received any hurt in battle, but both became the slayers of themselves, as they had been of Caesar. Such was the punishment that overtook Cassius and Brutus. Appian
After the victory the territory surrounding the town was assigned to Octavian's veterans and in 27 BC Philippi was renamed Colonia Augusta Iulia Philippensis in his honour as he had received the title of Augustus by the Senate. The town was ruled by two officers directly appointed by the emperor and its inhabitants were regarded as Romans living on the Italian peninsula. 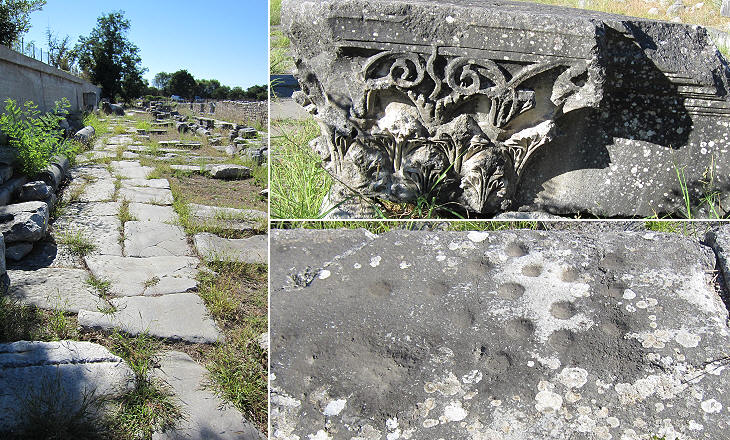 (left) Via Egnatia; (right-above) a capital in the Forum; (right-below) a stone of the Forum with cavities for a betting game played with small balls (see similar holes at Thugga in Tunisia)

We ascended a hill by an antient paved road about four feet wide, the remains of which had often occurred before during the day's journey. Clarke
Philippi is an exceptional testimony to the incorporation of regions into the Roman Empire as demonstrated by the city's layout and architecture as a colony resembling a "small Rome".
From the UNESCO synthesis of the universal value of Philippi which in 2016 was added to the World Heritage List.
The life of the citizens of Philippi revolved around the forum, a large rectangular portico along Via Egnatia which crossed the town from east to west; temples and a library were located on its short sides; the long side opposite the road bordered on a market; there is little evidence of these buildings because they were in part utilized for the construction of churches and because during the Ottoman rule the site was used as a quarry. 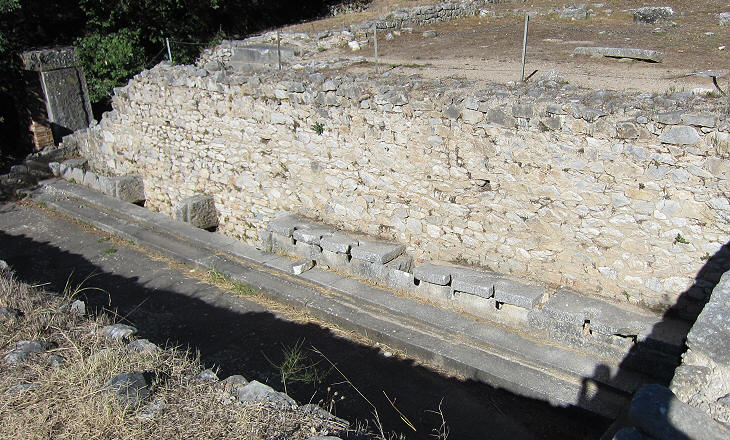 Public lavatories of the palaestra

The citizens of Philippi exercised in a large palaestra which was located near the market, the larger part of which was occupied in the VIth century by an imposing church; the public lavatories are the only well preserved part of the palaestra. 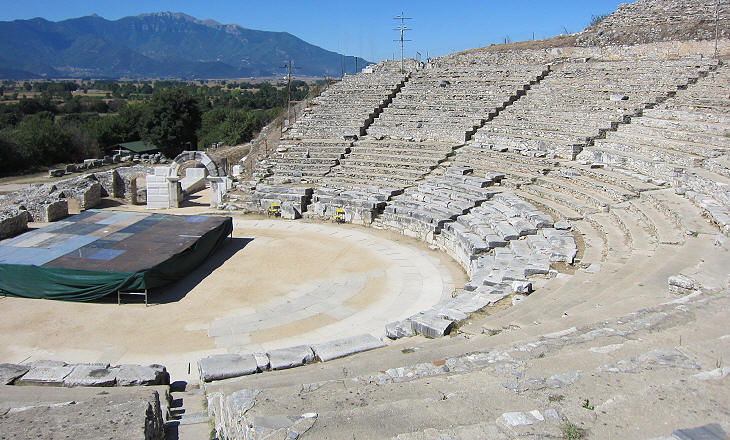 The theatre, dating originally from the period of Philip II is built into the south-east slope of the acropolis abutting the eastern city wall. It was reworked during the Roman period with construction of a three-storey scene building which has recently been restored for modern use. (..) Major restoration-anastylosis has been carried out at the Theatre. UNESCO
A small theatre was excavated into a hill to the north of the town, probably at the time of its foundation by King Philip II; it was enlarged by the Romans; since 1957 in summer it houses the Filippi Kavala Festival, a series of concerts and plays. 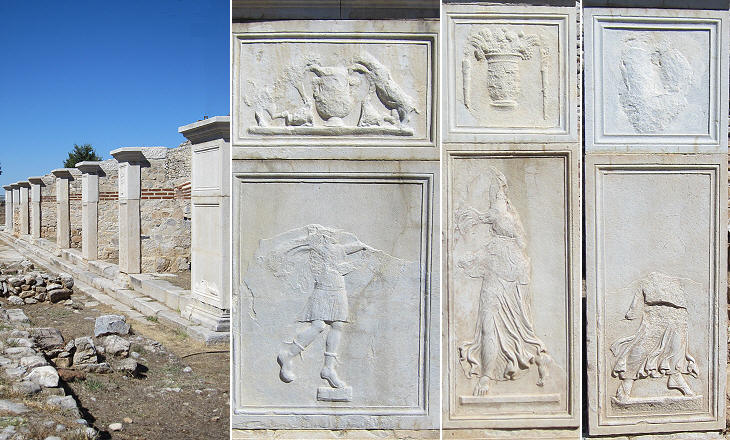 Reconstructed front of the theatre and details of the reliefs which decorated it; one of them is shown in the image used as background for this page

The elaborate reliefs which decorate the front of the theatre indicate that the building was initially used for traditional theatrical performances; in the IIIrd century it was modified to accommodate fights with wild beasts and other similar shows which had become very popular. 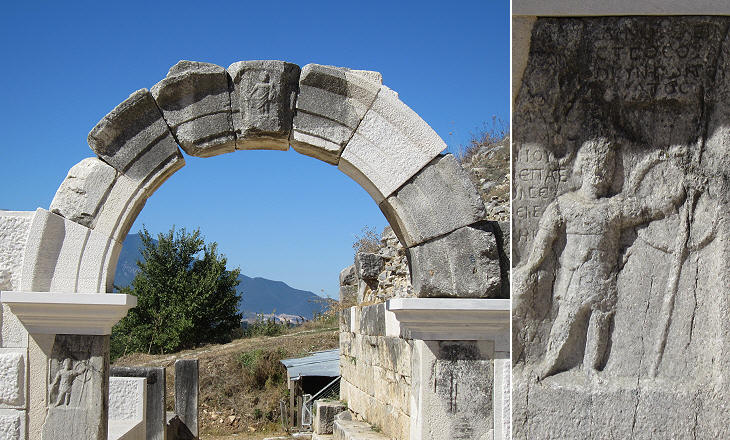 Further work was carried out to the paradoi, restraint walls, arches, scene building, post scaenam wall and orchestra, with improvement of the drainage system and conservation of the underground chambers for animals and gladiators. UNESCO
The change of use of the theatre is documented by some poorly executed reliefs such as the one portraying Mars as a gladiator. 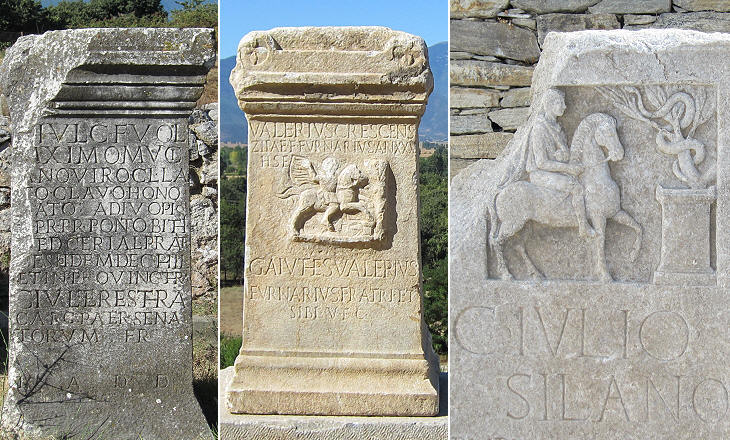 (left) IInd century AD tombstone of a magistrate; (centre/right) other tombstones with Latin inscriptions and reliefs portraying the Thracian Horseman

Carvings and inscriptions have been dated from the 5th century BCE. (..) A part of the western portion of the ancient cemetery of Philippi is still preserved, with sarcophagi and inscriptions. UNESCO
Philippi retained strong links with Rome and its inhabitants mainly spoke Latin; over the centuries however they were influenced by local traditions and beliefs; most of the tombstone reliefs found at Philippi portray the dead as a Thracian (or Macedonian) horseman, a local deity, which is thought to have inspired the iconography of St. George, although the snake portrayed in the ancient reliefs did not have a negative meaning. See a 300 BC rock carving at Argos. 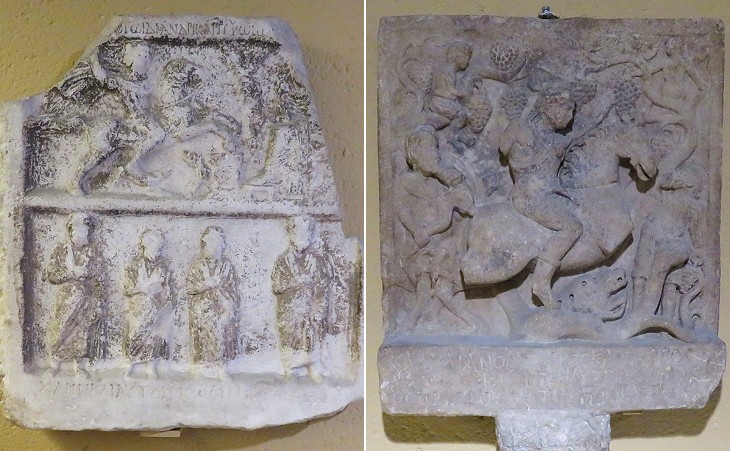 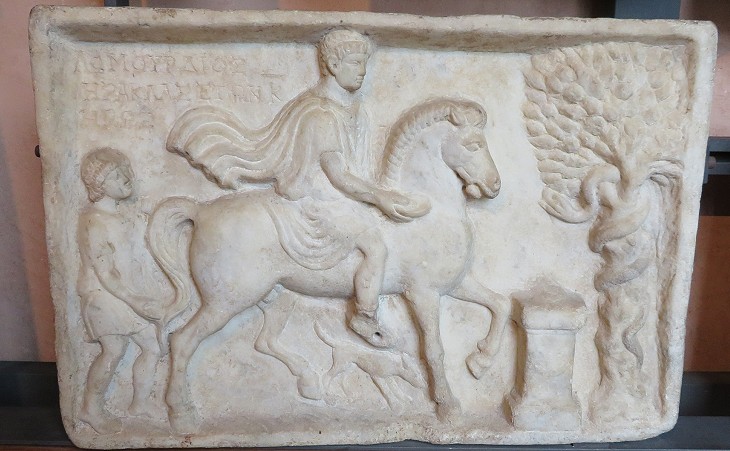 Museo Lapidario Maffeiano of Verona: relief with dedication to Loukios Murdios Heraklas who is portrayed while performing a libation (Ist century BC - bought at Smyrna)

Move to page two to see the Byzantine monuments of Philippi or to:
Kavala, the ancient Neapolis, the port of Philippi
Thessalonica
Veria
Kastoria