To the north east of the Strymon was the country called Macedonia adjecta; it was a part of Thrace conquered by king Philip, and added to Macedonia. To the south of that country I saw Thassus, a large island, with four or five villages on it, being famous among the antients for excellent white marble, and for its mines of gold. I was well informed that in one part of the island are many graves and coffins cut out of the rock; it is forty miles from Lemnos, and opposite to Cavalla.
Richard Pococke - A Description of the East and Some Other Countries - 1745
You may wish to see a page with a map of the Northern Aegean Sea. 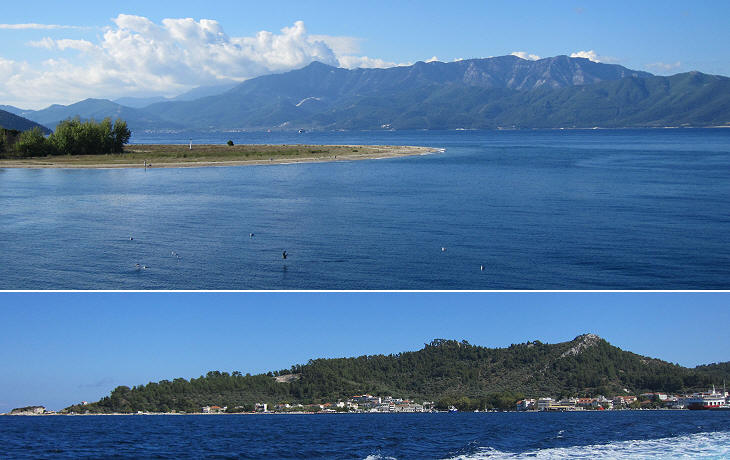 (above) View of the island from the Macedonian coast; (below) the three peaks of the acropolis

The captain agreed for a small extra payment to land me at the port of Limena, which is situated near the narrowest part of the strait. In less than two hours from leaving Cavalla we found ourselves approaching this place, and could descry a tall mediaeval tower, which is conspicuous enough to serve for a landmark, rising from among the houses that skirt the water's edge. (..) We now ascended to the acropolis. The lofty hill on which this stands is divided into three summits, which form a line running from north-east to south-west.
Henry Fanshawe Tozer - The islands of the Aegean Sea. Publ. 1890, but Tozer began his travels in 1874.
Thassos, because of its location very near the Macedonian coast, was well suited to become a trading base for Phoenician merchants. A promontory with three peaks on the northern coast of the island provided some natural shelter for a harbour; in the VIIth century BC the Parians replaced the Phoenicians and Thassos became part of the Hellenized world. 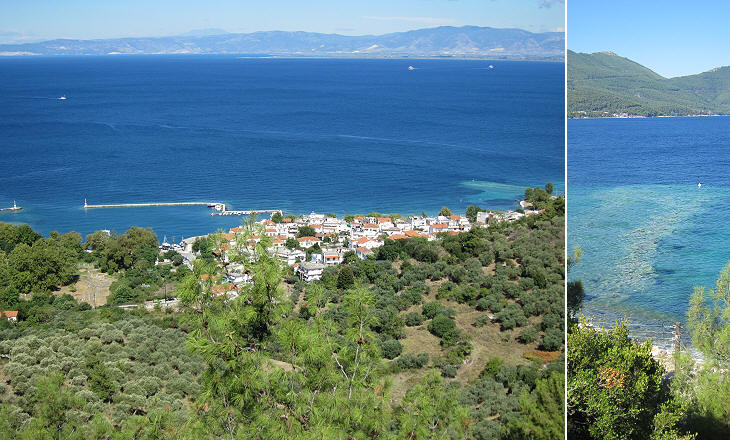 (left) View of the lower town: the site of the ancient military harbour almost corresponded to the modern one; (right) wharf (now underwater) of the trade harbour which was located to the east of the military one

I started to examine the site of the ancient city of Thasos, within the area of which the modern village stands.(..) The ground in the neighbourhood of Limena forms a triangular plain. (..) The eastern portion of this plain, together with the neighbouring heights, reaching as far as the little promontory, were occupied in ancient times by the city of Thasos, the capital of the island; while the western part, which was far the more extensive of the two, was devoted by the inhabitants to a necropolis, which from its size and the splendour of its monuments must have been almost unrivalled in antiquity. (..) The closed harbour, which lies in its neighbourhood, in all probability occupies the site of the ancient port, for traces of the old foundations of the piers are still visible. Between this and the promontory the remains of another breakwater, which projects into the sea at right angles, and must have formed an additional protection for shipping, appear below the surface of the water. Tozer
In addition to its being a trading centre, Thassos was also a mining one as gold, copper, lead and silver mines were excavated by the Phoenicians and after them by the Parians; the latter introduced marble quarrying, for which their island of origin was famous. 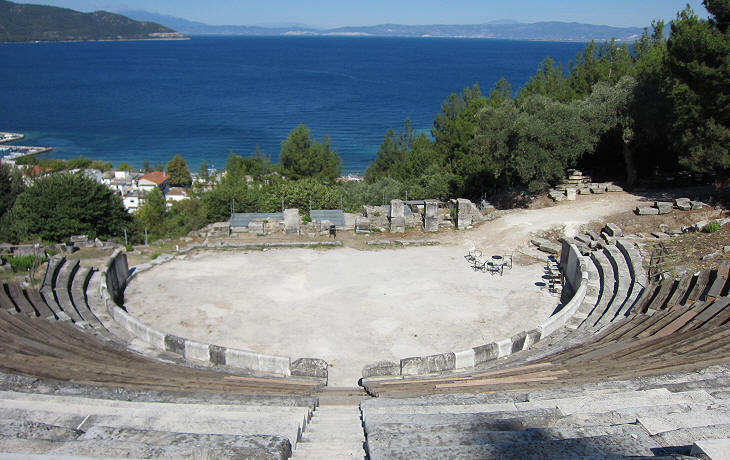 When we had reached the height of perhaps 300 feet, my guide conducted me to the theatre, which is situated in a steep position just within the line of walls, facing Cavalla, and commanding, as so many Greek theatres do (e.g. that of Antiphellos), a fine view over the sea. It has been partially excavated, but is in a very ruinous condition. Part of the wall of the scena remains, and behind it are the piers of a colonnade, fragments of which - small columns, triglyphs, and other ornaments - are strewn about in the neighbourhood. At the back of the orchestra the slabs of the podium which supported the front rows of seats lie on the ground, and most of these bear one or two letters inscribed on them in large Greek characters. Of the seats themselves very few occupy their original position, though in the upper part one or two rows are partially preserved. Tozer
In the IInd century BC the Romans conquered Macedonia and by alliances or direct rule they soon controlled the whole Aegean Sea; for many centuries Thassos benefitted from the security of sea lanes which was granted to the region by the Romans; its theatre was enlarged and adapted to holding fights with beasts (the wall surrounding the scene protected the spectators); the audience had to climb on the first hill of the acropolis, but they were rewarded by a commanding view over the narrows which separated the island from the mainland. Walls of the acropolis

We began to mount the ridge of the hill which leads to the acropolis, and before long came upon a considerable fragment of the ancient wall, which followed this direction. Like all the masonry in Thasos, it was composed of white marble, the grain of which was visible wherever the stone was fractured; and the blocks were usually laid in horizontal courses, though in some places they were polygons neatly fitted together. Tozer
Strongly built walls of the pre-Roman period protected the acropolis; long sections have withstood the ravages of time including some very strong earthquakes; their construction technique calls to mind that employed for the acropolis of Nissiros. 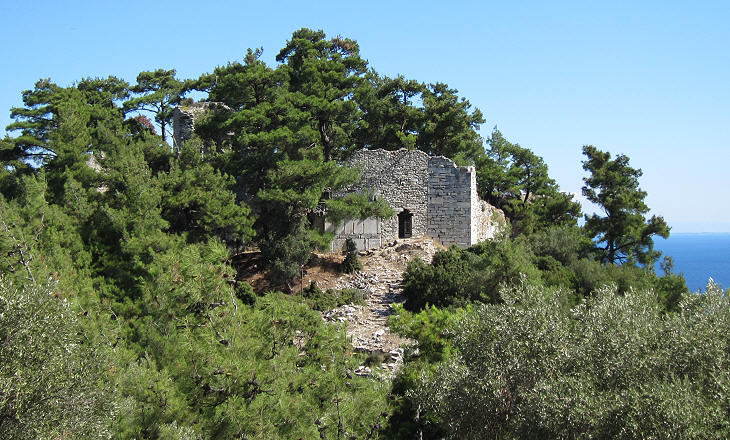 The north-east height was covered by a rectangular fort, of which only the foundations remain; the site of this is now occupied by the walls of a mediaeval castle, which was constructed out of the ancient material. This building was entered through a massive gateway, the lintel of which, formed of a single block, is still in its original position. Within there is a large cistern, and at the further end rise two square towers, one of which forms a conspicuous object when seen from the port below. The ground at this point is excessively steep, both in front and towards the back, and the pine-trees grow picturesquely among the ruins. The castle is not wholly unknown to fame; for within its walls Ramon Muntaner, the historian and one of the leaders of the Catalan Grand Company (a mercenary army) in their marauding expeditions in the Byzantine empire in the fourteenth century, was entertained by the Genoese chieftain Ticino Zaccaria, who, to use the words of the chronicle, 'put at our disposal the castle and all that it contained, and treated us magnificently.' Tozer
The peak of the first hill housed a temple to Apollo, which was turned into a medieval fortress where the inhabitants sought refuge from pirate raids; Thassos was pillaged by Slavs, Saracens and Normans and the rule of the Byzantine emperors was very often just a nominal one. In the early XIVth century, Ticino Zaccaria, a Genoese adventurer, ruled over the island, probably with the agreement of the Byzantine emperors. 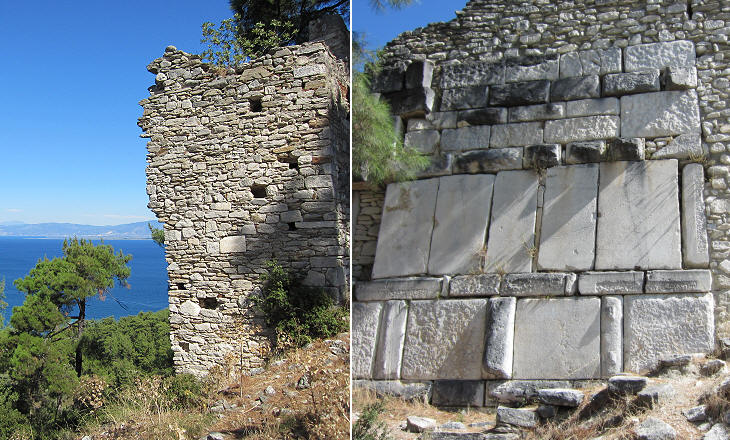 (left) Western tower; (right) marble slabs from the temple to Apollo which were used for the castle

As I passed the mediaeval tower already mentioned, I could see that it was composed of fragments of Hellenic masonry, for in some places portions of triglyphs had been built into it. Tozer
In ca 1415 Byzantine Emperor Manuel II assigned the islands of Thassos, Samothrace and Limnos to the Gattilusio, a Genoese family who already controlled Metelino, a large island near the Asian coast of the Aegean Sea; they were feudal vassals of the emperor, but because of their Genoese origin they were somewhat shielded from being attacked by the Ottomans; this because Genoa was on good terms with them. 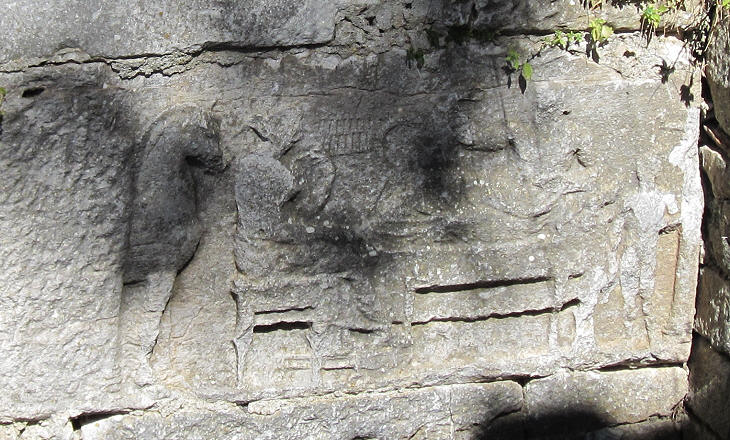 There is evidence that the Gattilusio strengthened the castle and other fortifications of the island; however after the 1453 conquest of Constantinople Sultan Mehmet II forced the Genoese to dismantle the fortifications which protected Galata, their main trading base and his troops occupied Thassos, Limnos and Samothrace. An hour had hardly elapsed from the time of my arrival, when the weather, which during the forenoon had been dull and rainy, as it had been hitherto throughout almost the whole of this journey, suddenly brightened; and for the rest of the day, and during the three next days, which I devoted to the exploration of this, the most beautiful island in the Aegean, I enjoyed a cloudless sky. Tozer
The second hill of the acropolis housed a temple to Athena of which only the foundations can still be seen; although the archaeological evidence is very limited climbing all the three peaks of the acropolis is rewarded by the scenery which surrounds the ancient stones with the sea below and the blue sky above. 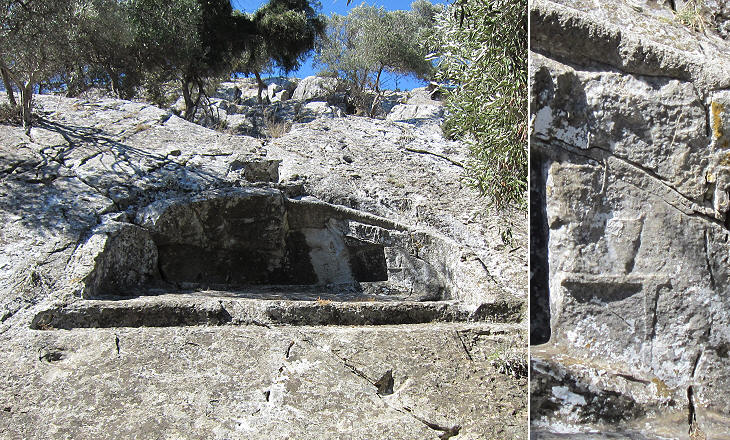 (left) Shrine to Pan on the third hill; (right) detail with reliefs showing ceremonial vases on a table; the section to the left of the relief has been removed

As we approached the last of the three heights, I saw in front of me a wide but shallow niche, surmounted by a low arch, the whole hewn in the rock, which had been artificially sloped in order to facilitate the approach to it. On the face of the rock at the back of this niche, which might roughly be compared in form to the tympanum in the pediment of a temple, several figures carved in low relief are traceable. Those towards the right of the spectator are almost obliterated; but in the centre Pan is represented with horns on his head, in a sitting posture and playing the syrinx and on the left hand stand three goats, one behind the other, with their faces turned towards him. On the slope of the niche there are other traces of ornament. This little shrine is an interesting sanctuary of the shepherds divinity, and is all the more impressive at the present day from the solitude in the midst of which it is found. Tozer
The god Pan loved nothing better than his afternoon sleep and he took revenge on those who disturbed him with a terrifying loud shout (that's why we call panic a state of terror); in summer he slept in a cave and the small shrine the inhabitants of Thassos dedicated to him has the shape of the entrance to a cave; see a similar, although more elaborate shrine at Paneas aka Caesarea Philippi (Banias). View eastwards from the highest peak

The contrast presented by the scenery to what I had been accustomed to in Lemnos was in all respects complete. In the place of grey and somewhat shapeless mountains, here were lofty ranges, sharply cut outlines, and rocks of white marble grain; instead of treeless expanses, extensive tracts of forest land; instead of scanty brooks, full and clear streams; and the whole of this radiant landscape was illuminated by a brilliant sun. The newly fallen snow which remained on the summits added a further element of beauty to the views. (..) The hill above the acropolis commands a superb view of the surrounding landscape. Towards the north stretches the coast of Macedonia and Thrace, separated from Thasos by spaces of blue sea (..) on the other hand appear the wooded heights and graceful bays of the eastern coast of Thasos, with Samothrace in the distance. Tozer
The image used as background for this page shows a relief in the lower town.

Move to page two to see the lower town.
Other pages of this section:
Metelino
Metimno (Molyvos)
Aivali/Cunda
Samothrace