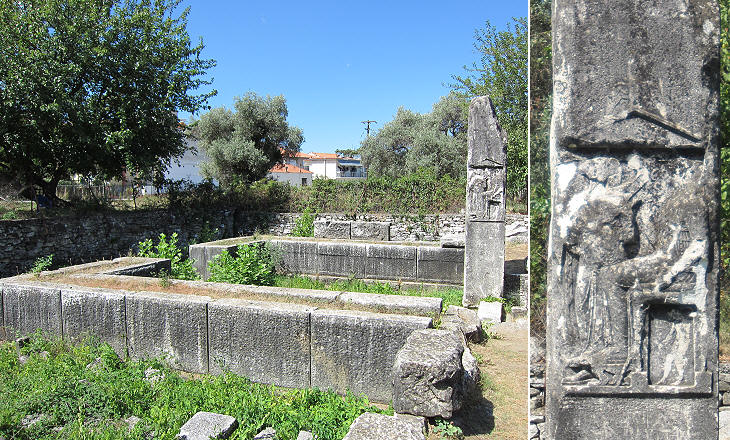 The wall makes a sharp turn, and at the angle is a gateway covered in by a prodigious stone, but the upright blocks which form its sides are now deeply buried in the earth. Following through the plain the outward face of the walls, we pass a second, and afterwards a third gate. The last-named of these, as it occupies a central position between the city and the necropolis, is thought to have been that through which the dead were carried; and this is rendered probable by the funeral monuments which are found in its neighbourhood. Here stands a tall stele, in the middle of which is represented a man seated, with a woman standing in front of him, while under the seat a smaller figure is sketched in low relief.
Henry Fanshawe Tozer - The islands of the Aegean Sea. Published 1890, but Tozer began his travels in 1874
Walls starting from the acropolis reached the sea to the west of the military harbour thus protecting the lower town of Thassos; notwithstanding the absence of other sizeable towns on the island, several gates were opened into the walls at a very short distance one from the other; they had a rather elaborate design and were decorated with reliefs portraying gods. 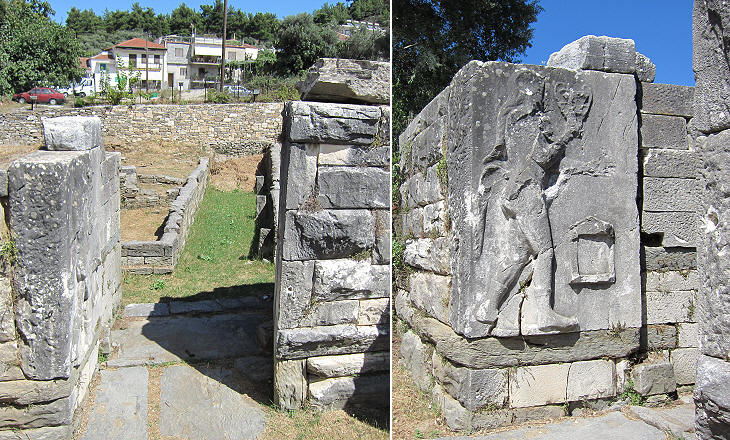 The gates probably had a ceremonial purpose and they led to nearby shrines; a large relief portraying Silenus indicates the relevance of the cult of Dionysus, of whom Silenus was a tutor and companion; this was probably due to the fact that Thassos produced famous wines and Dionysus was the god of winemaking; near the relief there is a small niche where offerings were made. 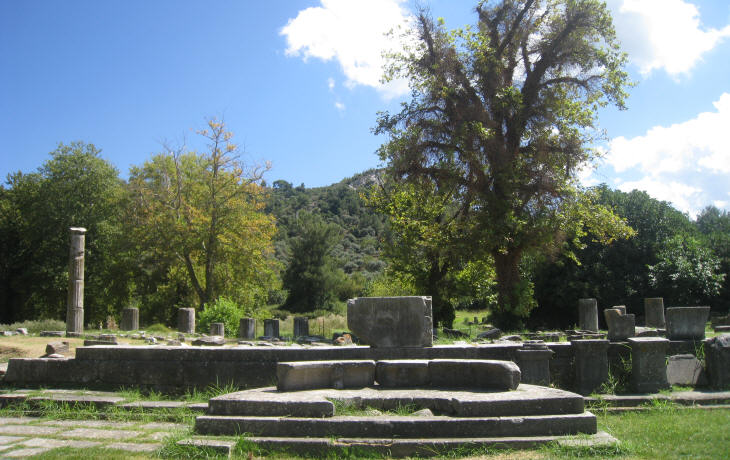 Several of the objects which surrounded a mausoleum, including some inscriptions, have been removed since Mr. Bent's visit. Tozer
The agora (forum) of Thassos was excavated as early as the 1860s by French archaeologists and a few years later by Theodore Bent (1852-1897), an English traveller and explorer. The Ottoman government allowed the removal of many reliefs. 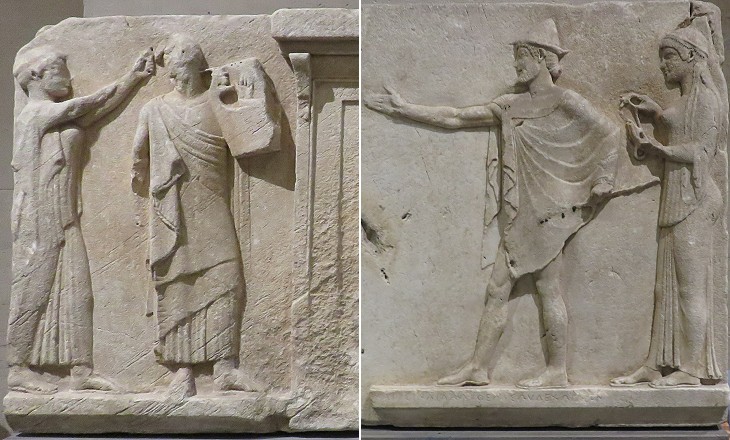 Louvre Museum in Paris: Vth century BC reliefs from the Passage of the Theoroi showing Apollo (left with the lyre) and Hermes (right with a conical cap) followed by goddesses perhaps Aphrodite (left) and Hecate (right)

Some of the reliefs which decorated the passage of the Theoroi, the highest magistrates of the town, are now on display at the Louvre Museum in Paris. 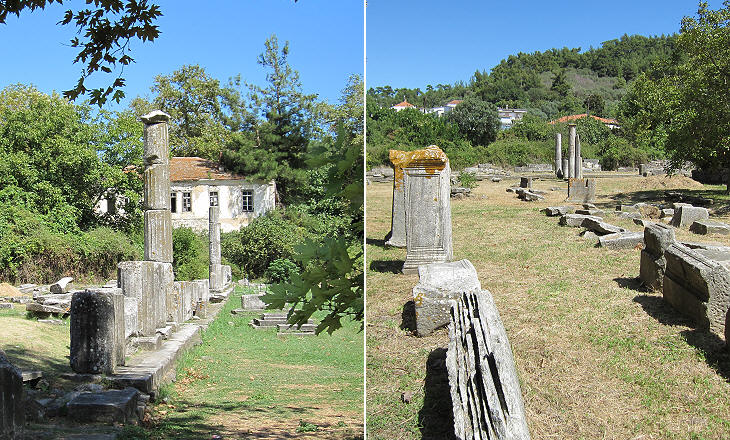 Within the circuit of the walls, and at no great distance behind the modern village, are the remains of a Roman arch, which have been recently excavated by Mr. Bent. The foundations of this remain in situ, but the rest is a heap of ruins, for the huge blocks of which it was composed lie against one another at various angles, as they fell. It was erected in honour of the emperor Caracalla, and the dedicatory inscription, which formed two long lines, is perfectly legible, though it is broken into three pieces. When the arch was perfect, it must have been a magnificent object. Tozer
During the Roman rule three porticoes surrounded the space of the old agora, an indication of the wealth of the town in that period. A triumphal arch, of which only the foundations remain, was dedicated to Emperor Caracalla who probably visited the island on his way to the eastern borders of the empire. 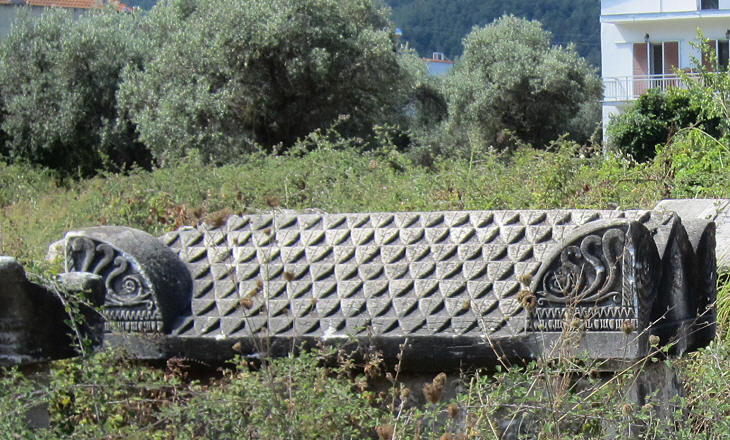 Lid of a sarcophagus

There is a large sarcophagus, the covering of which is formed by a mass of stone of enormous weight. (..) I returned to Limena from the necropolis with a sense of disappointment, arising from the insignificance of the remains of what was once a collection of splendid monuments. The work of destruction has proceeded during long ages, and especially in the present century, for Baron von Prokesch-Osten, who visited Thasos in 1828, speaks of seeing more than fifty of these sepulchres. Many fine tombs, no doubt, still remain beneath the surface of the ground, and may be brought to light by excavation; but these will hardly suffice to recall the former glories of the place. (..) At Theologo, as at Limena, many of the objects that have lately been discovered have been removed. Tozer
While the agora is part of an archaeological area many other ancient monuments are scattered around the modern town: there are temples, gates, other buildings and several sarcophagi. 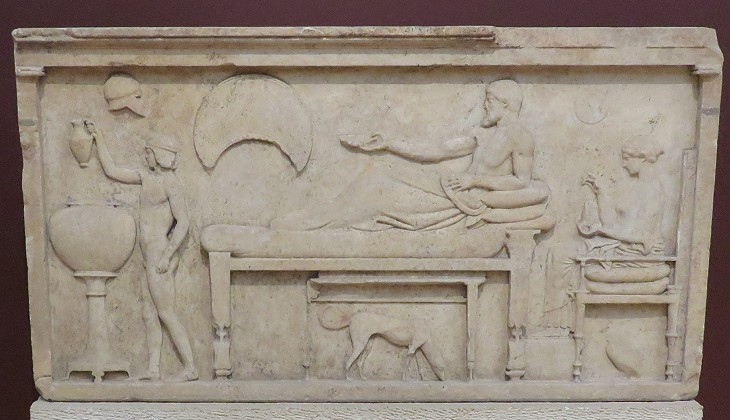 Thassos remained an Ottoman possession until 1912 when it was occupied by Greek forces. Some of the works of art found by archaeologists on the island are therefore on display in Costantinople/Istanbul. 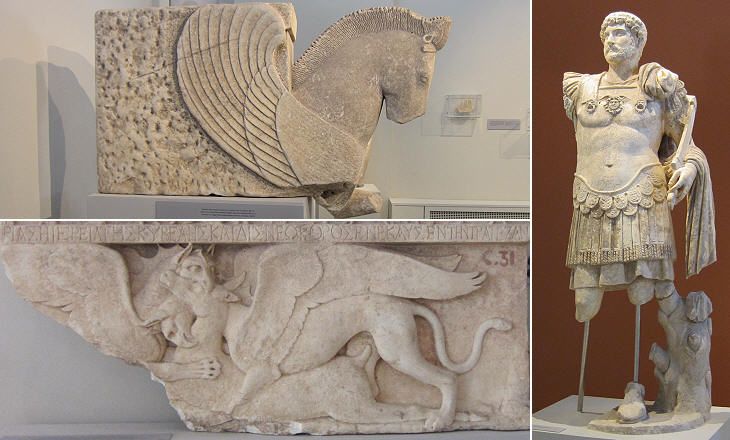 The Archaeological Museum of Thassos was built near the agora in 1935, but it was enlarged and renovated in 1999; its exhibits span more than a thousand years from anthropomorphic funerary monuments of the Bronze Age to mosaics of the Late Roman Empire; in 357 AD a very strong earthquake struck the island and it caused a partial collapse of the harbour structures into the sea; this event caused the sudden decline of Thassos which is almost entirely without monuments of the Byzantine period. 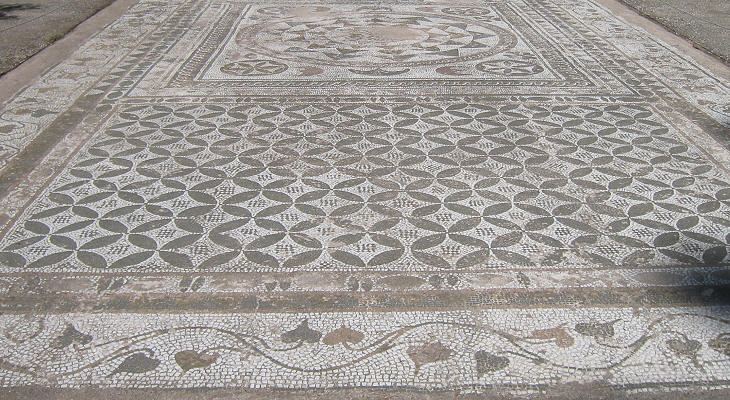 Mosaic of a Roman villa

The image used as background for this page shows a relief in the Archaeological Museum.

Return to page one to see the acropolis.
Other pages of this section:
Metimno (Molyvos)
Aivali/Cunda
Samothrace
Metelino