You may wish to see a page with a map of the region first. 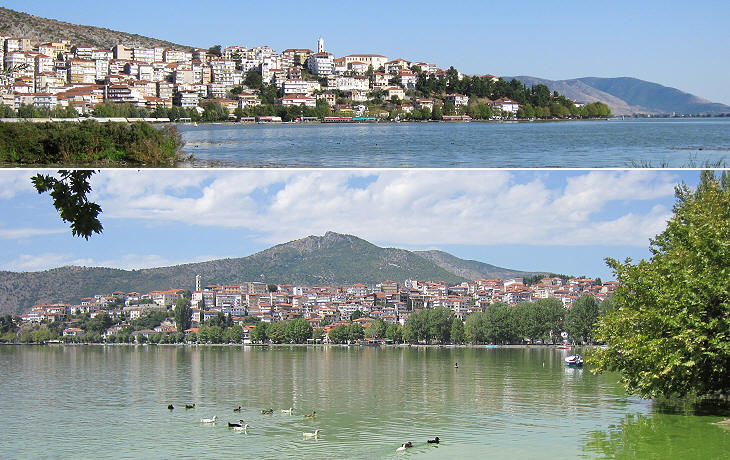 Views of Kastoria: (above) from the west; (below) from the south (road to Moni Panagia Mavriotissa)

(September 1805) We now cross a plain: at its extremity to the right is the Lake of Kastoria. (..) The town appears on the opposite side, built on an isthmus, which connects a high rocky peninsula with the north-western shore. The peninsula extends into the middle of the lake, and a large monastery is seen at its extremity on the water side. (..) The lake is frozen over occasionally when the north winds are constant in winter; seven or eight years ago carts passed across upon the ice. (..) Of the Hellenic name of this remarkable position we should have been left in ignorance, but for a single passage in Livy, which leaves no room for a doubt that it is the site of Celetrum, and thus affords a most useful point for the adjustment of the comparative geography of the surrounding part of Macedonia.
William Martin Leake - Travels in northern Greece - 1835
Kastoria is located in Northern Greece, not far from the border with Albania, at the beginning of a headland which divides Lake Orestiada into two sections. According to tradition the town was founded by Orestes; it is mentioned by Livy in connection with the Second Macedonian War. 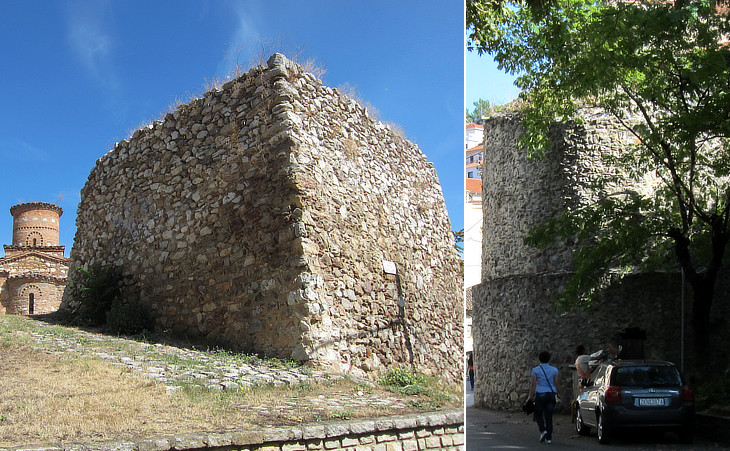 (left) Square tower and Panagia Koumpelidiki in the background; (right) round tower

Having skirted the western shore of the lake, we enter some gardens abounding in walnut trees, and halt among them near the gate of the town. (..) The present fortification of Kastoria consists only of a wall across the western extremity of the isthmus, which was built at the time of the Byzantine Empire. (..) In the middle of the wall stands a square tower, through which is the only entrance into the town. A parallel wall, flanked with round towers, which in Byzantine times crossed the peninsula from shore to shore, and excluded all the eastern part of it, although now in ruins, still divides the Kassaba, or quarter of the Turks, from that of the Greeks, whose town occupies the middle of the peninsula, and extends down to the water on either side of it. Leake
In the VIth century AD Emperor Justinian erected walls which turned the settlement into a sort of castle (Lat. castrum, Gr. kastron), which probably gave the name to the town. 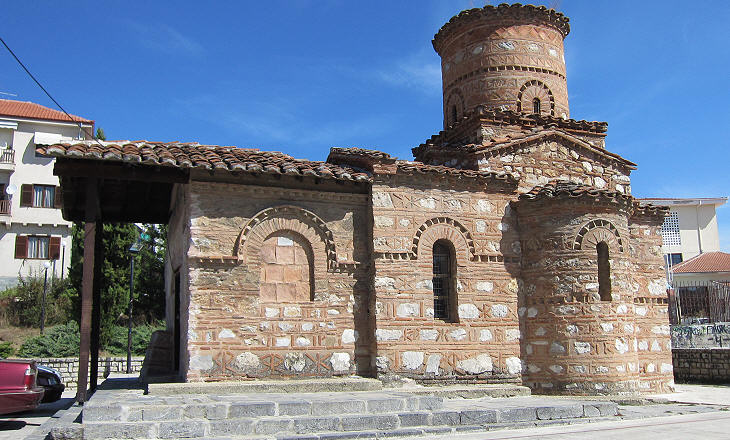 It would seem that the merchants of these Macedonian towns have lost something of the barbarous virtue of hospitality, though at Kastoria something may perhaps be ascribed to an anxiety to resist every infringement of an ancient privilege which exempts the Greeks of this place from the burthen of lodging passengers. Leake
In 1385 Kastoria was conquered by the Ottomans; most likely it was surrendered without much fighting by its rulers, a family of Albanian origin; the conquerors did not sack the town and granted special privileges to its inhabitants. This explains why Kastoria retains so many Byzantine churches and only minor evidence of the Ottoman rule which ended in 1912.
Panagia Koumpelidiki is one of the oldest churches of the town and it owes its name to its high dome (Turkish: kumbet); it is located in a position commanding great views on the southern section of the lake. 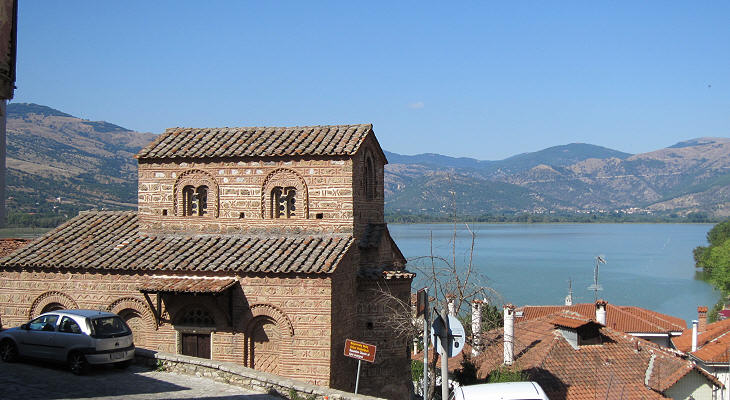 Agii Anargiri Varlaam and the northern section of the lake

The scenery around Kastoria is extremely beautiful. Trees and verdure adorn the higher parts of the mountain, and below are small villages and cultivation mixed with woods. Leake
Agii Anargiri means the healing saints, the most famous ones being Saints Cosmas and Damian; the dedication was made by Theodoros Limniotes, the person who restored the church towards the end of the XIIth century; the building is a landmark of the northern side of the town. 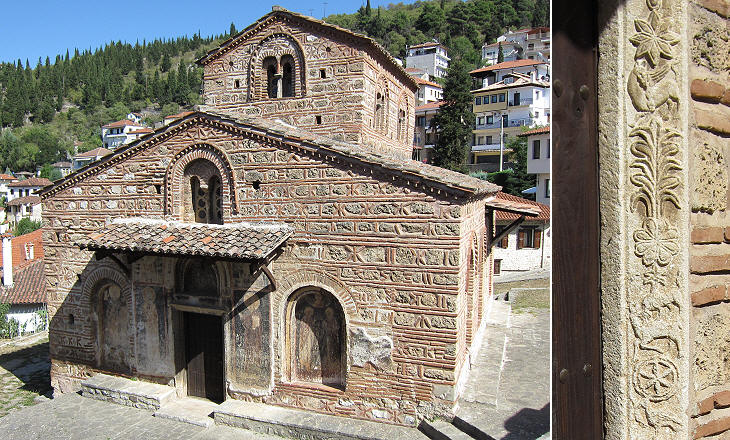 (left) Agii Anargiri Varlaam; (right) detail of the side entrance

There are many small churches of ancient date in different parts of the peninsula, which are said to have been built by persons banished from the capital, and confined here by the Greek emperors. The accurate description of Castoria by Anna Comnena, shows that no great change has occurred since the twelfth century. Leake
Kastoria had special links with Constantinople because the Byzantine emperors exiled members of hostile families as well as hostile members of their own family to this remote town. These links may explain the elaborate brick decoration of Kastoria's medieval churches and in general their elaborate design. Anna Komnene wrote an account of the reign of his father Alexios I Komnenos (1081-1118). 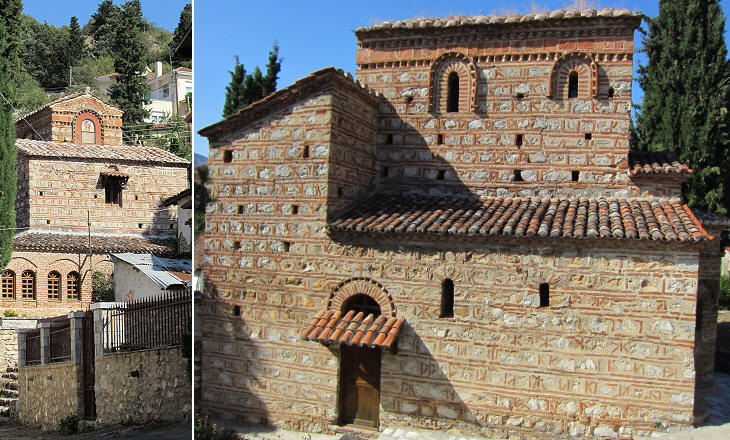 A peculiar aspect of many churches is their vertical dimension, whether in the form of a dome supported by a very high drum or by a raised section of the nave. Agios Stephanos was built at the start of the Xth century, but it probably reached its current aspects in the two following centuries. 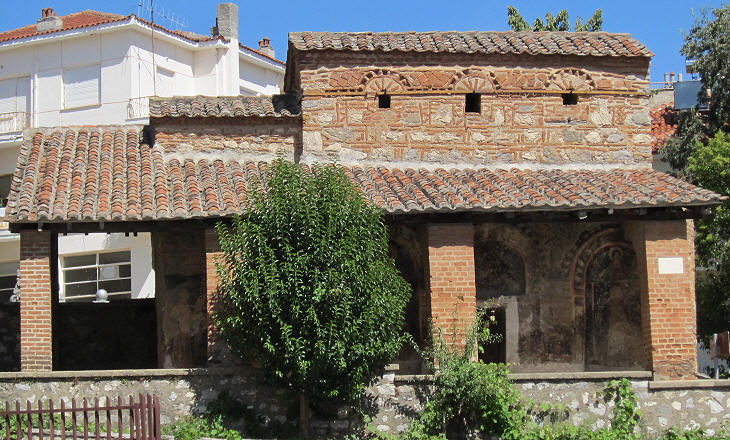 The annual value of the fish caught in this lake amounts to 100 purses. Besides the quantity consumed fresh in the town and surrounding villages, a large proportion is salted and meets a ready market in every part of Macedonia and Thessaly.
Prior to the Ottoman conquest Kastoria was seized by the Bulgarians, by the Normans, by the Serbs and by different Byzantine factions, yet these events did not impact on the economy of the town where wealthy families continued to build, maintain and embellish churches and chapels. 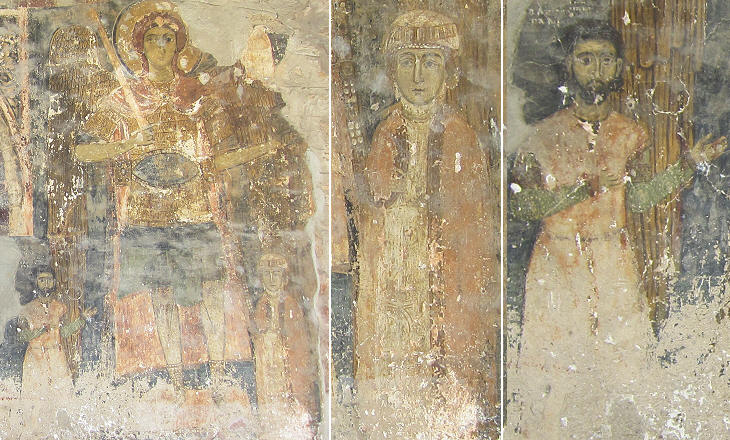 Taxiarches means archangels and this old church was in particular dedicated to Archangel Michael who was regarded by Greeks as the heir of the god Hermes as leader of souls to Hades and as the weigher (of souls) on Judgement Day. It is thought that the church served as the mortuary chapel. 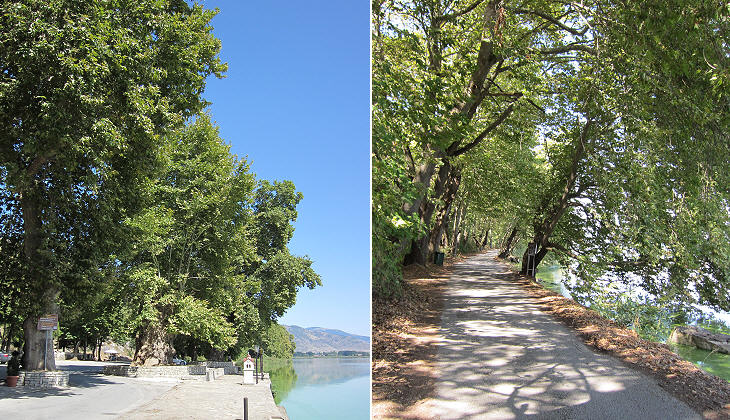 The Lake of Kastoria is reckoned a six hours' ride in circumference, but does not appear to me to be above six miles long and four broad. The peninsula is near four miles in circumference, and the outer point is not far from the centre of the lake. In the evening I make the tour of the peninsula in a canoe. (..) A narrow plain stretches along the margin of the lake, which on either side of the gardens is covered with walnut-trees and poplars. Leake
Moni Panagia Mavriotissa is a monastery which lies at the tip of the headland and which can be reached in about an hour from Kastoria; it is possible to return to the town via the northern side of the peninsula. It is definitely a very pleasant walk which prepares the mind for visiting the monastery. 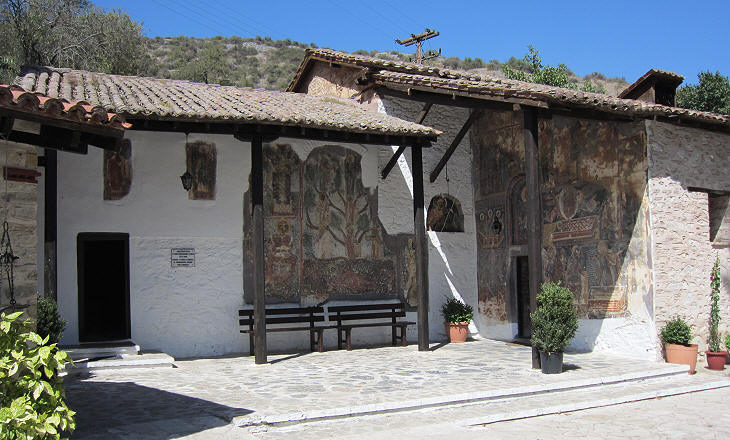 The monastery was founded in the late XIth century when the Byzantines retook the town from the Normans; in the XVIth century a chapel dedicated to St. John the Evangelist was built to the side of the monastery's katholicon (principal place of worship). For this reason the wall paintings of the complex span several centuries.
The image in the background of this page shows a detail of a painting in the external wall of the chapel. 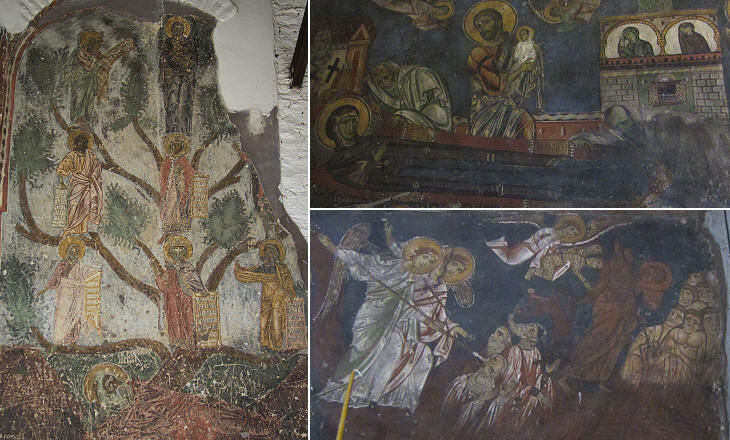 Moni Panagia Mavriotissa: (left) exterior: Tree of Jesse; (right) interior: (above) Dormition of the Theotokos - Mother of God; (below) detail of the Last Judgement

The paintings shown above are in general thought to be works of the late XIIIth century; they include a vivid depiction of the Last Judgement and a genealogy of Jesus Christ which has a political meaning because next to it two emperors are portrayed: a member of the Komnenos dynasty and Emperor Michael VIII Palaeologus who conquered the city in 1261. The association between the two emperors and the Tree of Jesse was meant to legitimate Michael VIII as the heir of the Komnenos. 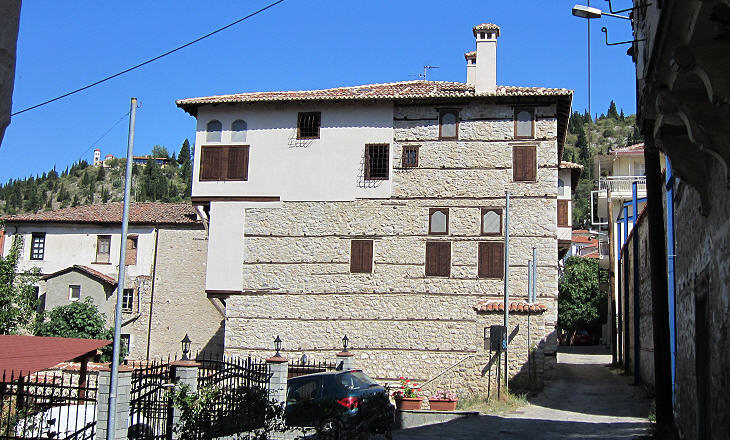 After some delay we are conducted to the house of a papas, where I am soon afterwards visited by Kyr K., who is now very pressing that I should remove to his house, which I decline, though my konak is humble enough, compared with the handsome houses of some of the Greek merchants, particularly that of Kyr K. himself. (..) Kastoria, contains about 600 families, of whom the Jews form a tenth, and the remainder is divided equally between Turks and Greeks. (..) The Greeks of Kastoria are somewhat less exposed to the exactions of Aly Pasha. (..) Enough, however, has been done to thin Kastoria of its inhabitants; and several of the large houses, both of the Greeks and Jews, are falling to ruin, or standing empty. Leake
Some of the wealthiest Greek merchants of Kastoria made enough money to build imposing houses, similar to those which can still be seen at Safranbolu, a town in Anatolia which retains a typical Ottoman urban landscape. 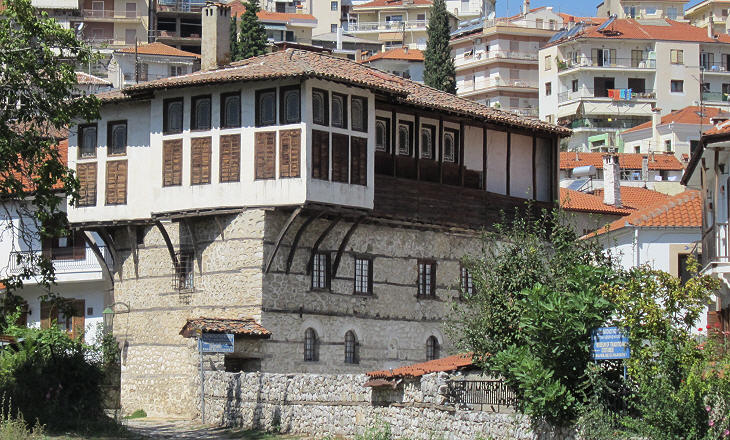 Other pages of this section:
Thessalonica
Philippi
Kavala
Veria