- Meteora Monasteries - Introduction
(a view of the monasteries) 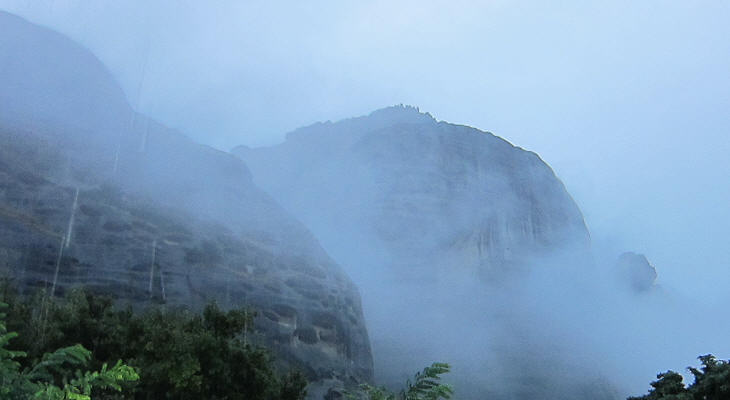 Meteora in the mist seen from Kalambaka

(November 1805) From the left bank of the river rises a range of hills of a secondary altitude, which terminate towards the valley of the Peneius, in the perpendicular rocks named the Meteora, upon which are built the monasteries At 10.20, the principal monastery or Meteora, individually so called, is on a high rock to the left, distant two or three miles, and another midway on a point half as high as the former. (..) The bishop of Trikkala, a man of some curiosity and information (..) is rather scandalized at my having passed without visiting the Meteora, which he qualifies as "royal and heaven-built works".
William Martin Leake - Travels in northern Greece - 1835
The Greek word meteora is the plural of meteoros which means "it stands above, in the air"; it is used to design a series of monasteries built on high cliffs at the western end of a large plain in Thessaly, a region of Central Greece; the term however could be applied also to the rocks themselves when mist or clouds hide their lower parts. 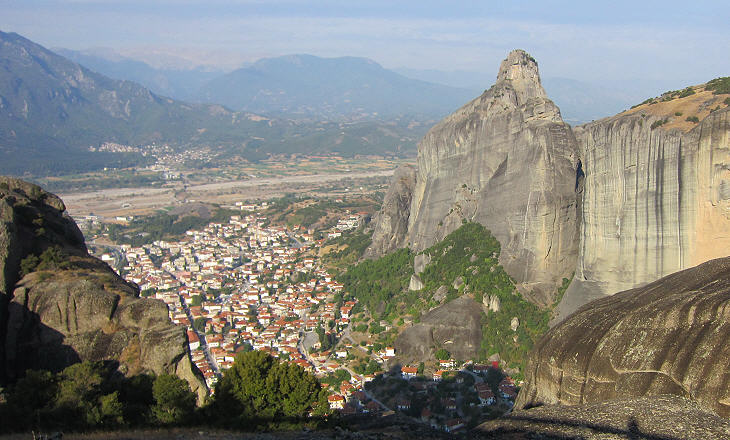 (November 1805) Kalambaka is situated on the south-eastern side, and immediately at the foot of a perpendicular precipice, which is five or six hundred feet high, and of an uniform surface from top to bottom, but is divided into two parts by a deep vertical fissure, affording a narrow passage from the town to the monasteries of the Meteora. (..) (November 1809) A fall of snow during the night renders the road extremely bad; and (..) lengthens the time to Kalambaka an hour and a half. In descending the heights (..) the view opens of the entrance into Thessaly between the superb rocks of the Meteora on the north, and the woody mountain opposite to them on the south, together with a part of the plains of Upper Thessaly, not far from Trikkala; with the exception of this part of the landscape the whole is now covered with snow. (..) In the opposite direction the view is of a singular description, and very beautiful. Trikkala and the whole length of the Thessalian plain as far as the heights of Pharsalus, with Mount Othrys in the horizon, are seen like a picture through the frame formed by the narrow opening of the two towering precipices. Leake
Kalambaka (aka Stagus) is a very old settlement built on high ground between two imposing rocks. 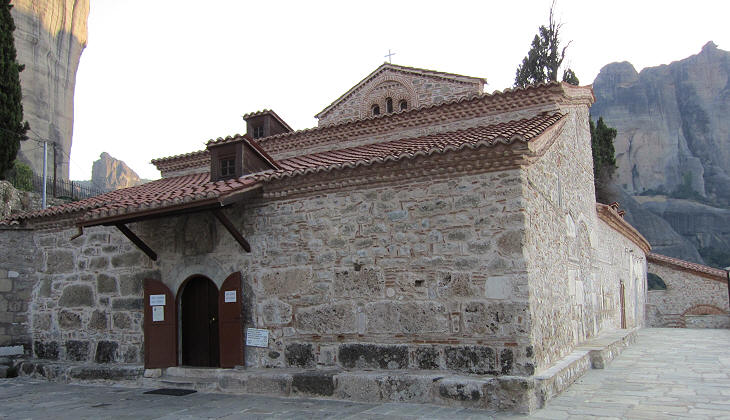 (November 1809) The bishop, who being an Ioannite is more polished than the generality of caloyers, confirms the information which I received on my former visit as to the existence of some vestiges of a Hellenic city at the distance of two or three miles from Kalambaka. (..) The town is injured permanently by the expence of konaks (small palaces, but here used to indicate compulsory free lodging), to which it is continually subject, in consequence of its lying at the exit of the most frequented pass in Greece. The master of the house in which I lodge, had the honour not long since of having a Bey with a party of Albanians quartered upon him for ten or twelve days: they burnt his furniture and his silk frames, and finished by borrowing a valuable mule, which he saw no more. Leake
The former cathedral of Kalambaka is a very complex XIVth century building which incorporates parts of previous churches; it indicates that the town was not a negligible village; according to Leake it had been a metropolitan see, although at the time of his journey it was a poor bishopric of the province of Larissa. 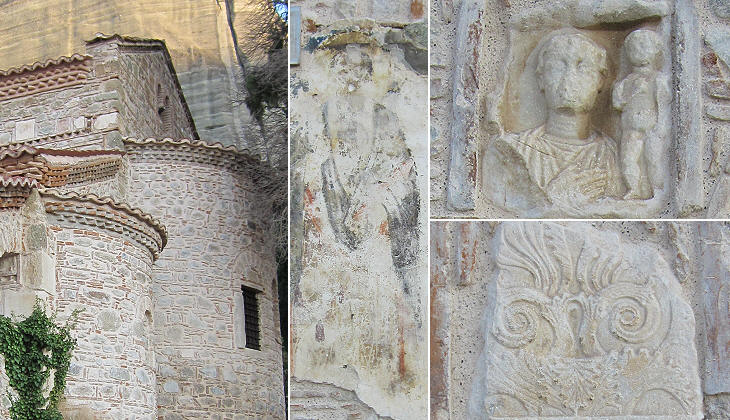 Parts of ancient stones were re-utilized in the XIVth century building, which means that a town existed in the area in the first centuries AD; according to an inscription found by Leake, the town was visited by Emperors Septimius Severus and Caracalla.
References to Meteora are made by Herodotus and Strabo, but overall the site did not attract much attention in antiquity and its rocks were not attached to tales related to the intervention of gods. 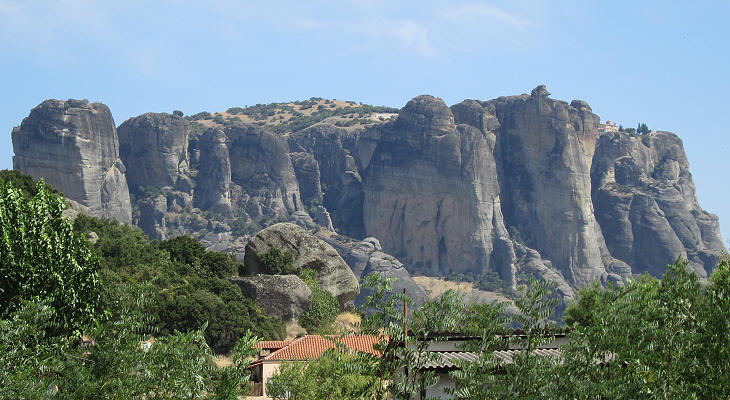 The monasteries of Meteora are seven in number. Aia Moni is now empty.
Léon Heuzey and Honoré Daumet, two French archaeologists who worked also at Dion and Philippi, published a map of the monasteries in 1876, thus contributing to making them popular in Europe.
In 1881 Thessaly was annexed to the Kingdom of Greece and in the following years a railway line reached Kalambaka; the arrival of visitors led to the development of the town on the plain. 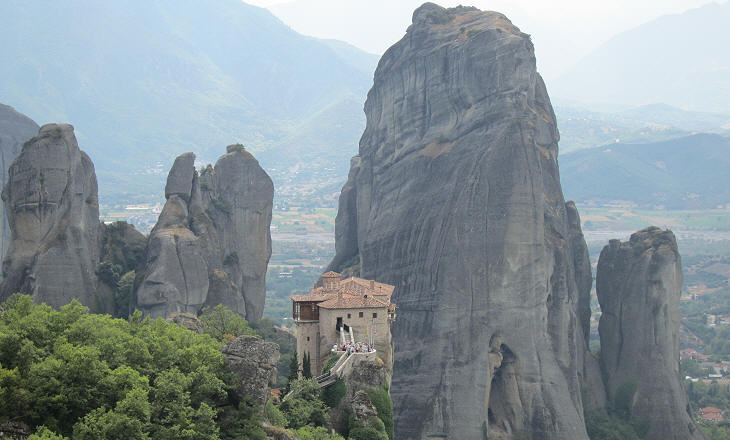 (November 1809) The composition of these rocks, and of all the peaks of the Meteora, is very extraordinary, being an aggregate of pebbles and broken stones of all sizes and descriptions, combined by an earthy or gravelly cement. Leake
Geologists set the formation of the rocks to a time when the area was a seabed or the bed of a very large river; the sandstone was moulded into the present imposing rocks by tectonic movements; these movements created fault lines of friable materials which have been eroded by rain and wind.
When seen from a distance the rocks have the appearance of an almost compact block, but deep precipices divide them into separate "towers"; the many caves existing in the rocks were used as natural shelters by the first inhabitants of the region, but when the development of more elaborate social structures led to the foundation of towns, the "towers" were not used for locating an acropolis there; reaching their top was excessively difficult even though they provided for a formidable natural defence. 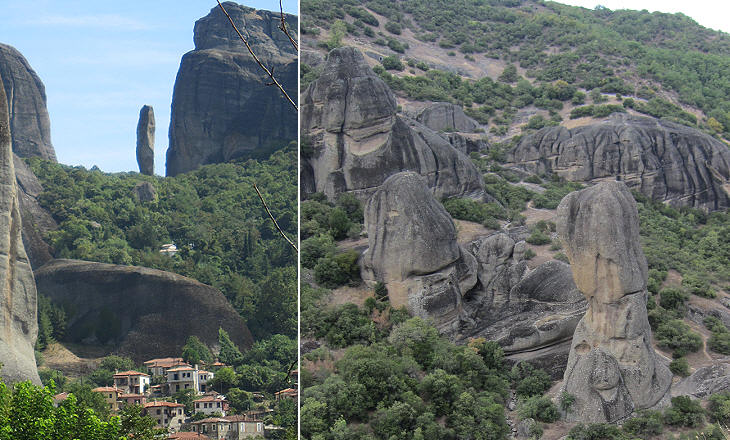 Rocks which bring to mind similar rocks in Cappadocia

The erosion has led to the formation of some very unusual rocks which seem on the verge of collapsing; owing to them and to the presence of monasteries the site has many points in common with Goreme and other locations in Cappadocia, Turkey. 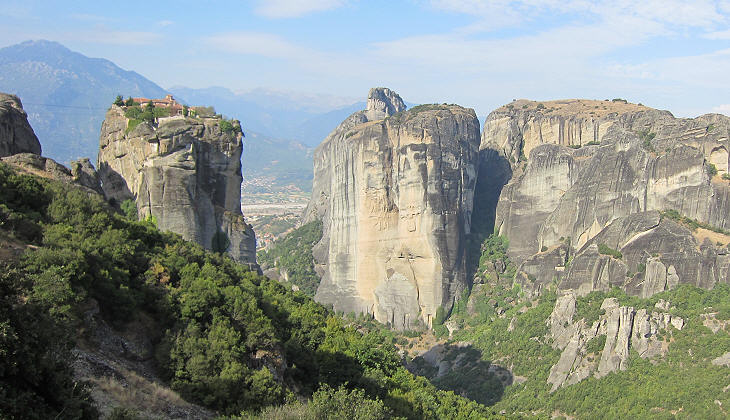 Having descended this morning and mounted my horse at the foot of the rock, we proceed through an opening between two of these stupendous natural walls by a steep zig- zag. Leake
In a region of almost inaccessible sandstone peaks, monks settled on these 'columns of the sky' from the 11th century onwards. Twenty-four of these monasteries were built, despite incredible difficulties, at the time of the great revival of the eremetic ideal.
From the UNESCO synthesis of the universal value of the Meteora monasteries which in 1988 were added to the World Heritage List.
The image used as background shows a cross on one of the monasteries.

Move to page two to see the monasteries and to page three to see some of their works of art.