You may wish to read an introduction to this section with a map first. (left) Southern walls; (right) western side of the town seen from the road to the Necropolis

Even from the station of Palo, the white walls of Cerveteri may be discovered under the low-lying grey hills upon the right. The distance by the fields is about four miles. (..) The most conspicuous feature in distant views of the town is the castle of Prince Ruspoli, who is Prince of Cerveteri, and to whom most of the land in this neighbourhood belongs. The people all work in gangs, long lines of men and women in their bright costumes digging the land together. Most travellers who come upon them thus, will be struck with the rude songs with which they accompany their work, one often leading, and the rest taking up the chorus in melancholy cadences.
Augustus J. C. Hare - Days Near Rome - 1875 Rock upon which the tiny medieval town stands: (left) XIIth century tower built above Etruscan walls; (right) rear side of Palazzo Ruspoli on the eastern side of the town

While all this was going on (the siege of Rome by the Gauls), the Flamen of Quirinus (one of the three highest Roman priests) and the Vestal virgins, without giving a thought to their own property, were deliberating as to which of the sacred things they ought to take with them, and which to leave behind, since they had not strength enough to carry all, and also what place would be the safest for their custody. (..) They carried them off, taking the road which leads by the Pons Sublicius to the Janiculum (..) to Caere, their destination.
Livy - History of Rome - Book V:40 - Translation by Rev. Canon Roberts.
From the belief that the Etruscan priests of Caere first instructed the Romans in their mystic religious rites has been deduced the word ceremony - "Caeremonia". Hare
Kysry, (Latin Caere) was one of the main Etruscan towns; it reached the peak of its prosperity in the VIth century BC when it had substantial military and trade fleets at Pyrgi and Punicum. In the early IVth century BC, unlike other Etruscan towns, e.g. Veii, it was not hostile to the Romans, but it was eventually forced to accept their rule. The importance of Caere declined during the Roman rule and eventually during the Middle Ages only the most elevated and defensible part of the town continued to be populated. Because of its proximity to the marshy coastline it was plagued with malaria and some of its inhabitants moved to a more inland settlement which was named Caere Novum, hence the old town became known as Caere Vetus, today's Cerveteri. In the XVth century the town was acquired by the Orsini who had a major castle at nearby Bracciano. In 1674 they sold it to the Ruspoli. 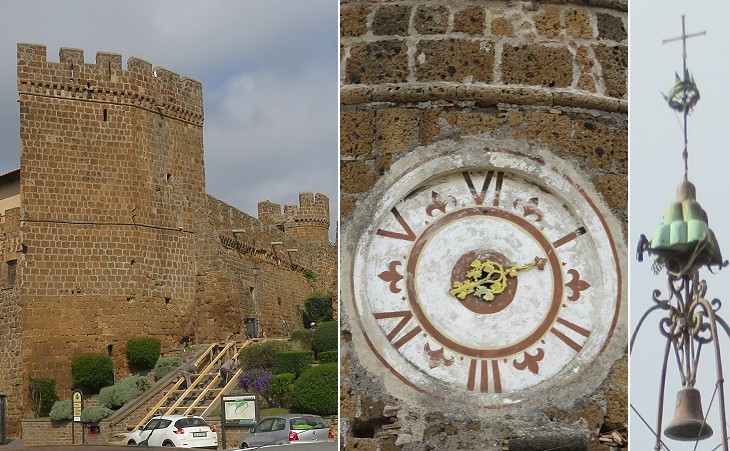 Rocca di Cerveteri: (left) southern tower; (centre) clock indicating the Italian Hour; (right) heraldic symbols of the Ruspoli similar to those at their Roman palace and at Vignanello, another of their fiefdoms

As we ascend the hill of Cerveteri, the walls built by its Orsini barons rise picturesquely along the crest of the hill, constructed with huge blocks of orange-coloured tufa taken from the Etruscan fortifications. Hare
In 1709 Pope Clement XI named Francesco Ruspoli Prince of Cerveteri because he recruited an infantry regiment of 600 men at his own expense to protect the northern border of the Papal State during the War of the Spanish Succession. 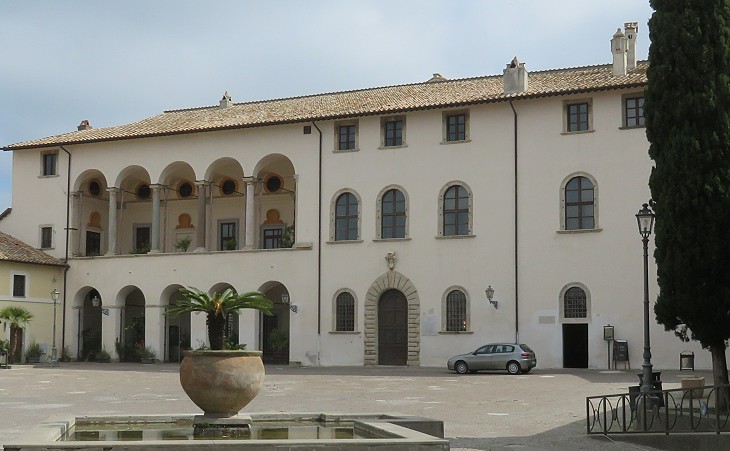 Palazzo Ruspoli opposite the castle

The sixteenth century Principi Ruspoli Palace in Cerveteri, current home to the princesses Maria Pia Ruspoli and Jacinta, is one of the most beautiful and important historic buildings in Italy. It's located in the heart of the town of Cerveteri, in the beautiful Piazza Santa Maria, in front of the Etruscan Museum. (..) Famous people have stayed in the palace, like Pope Innocent VIII, who came to these lands for wild boar hunting, famous English writer David Herbert Lawrence, who lived here during his stay in Italy and musician Georg Friedrich Handel, who composed his famous cantata "Diana the Huntress" right in this place.
From the Ruspoli's website. The church is modern, but it retains parts of a XIIth century building for which ancient columns were employed. 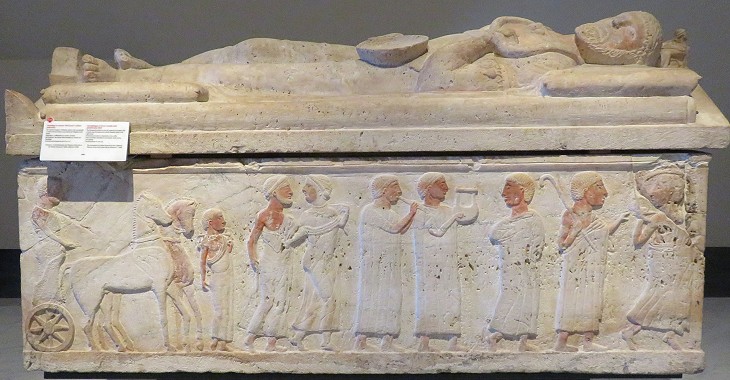 In 1837 Pope Gregory XVI founded Museo Gregoriano Etrusco to house the papal collection of Etruscan works of art. It includes a rare marble sarcophagus which portrays the dead on the lid and a funerary procession on the box.

The giant fibula is in the Italic tradition, but the five lions that stride across the gold surface are motifs originating in the orient. (..) It equals or exceeds in quality anything that might have served as model.
Gardner's Art through the Ages - Wadsworth - 2010
The tomb was discovered still intact in 1836 and a woman was found buried in a chamber with a rich personal collection of refined jewellery and vessels in silver and bronze. This treasure explains why Italian authorities have to deal with so many tombaroli (grave robbers) in the area of Cerveteri. You may wish to see some other Etruscan jewels in the Museum of Civitavecchia. 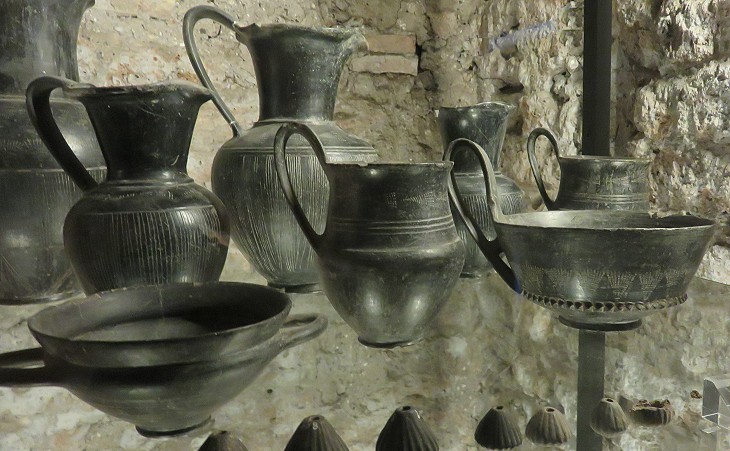 In 1887 the Italian Government founded Museo Nazionale Etrusco (now at Villa Giulia). In the 1960s the Ruspoli donated their castle so that it could house the works of art found at Cerveteri, in particular at La Banditaccia, the main necropolis of the ancient town. Museo Nazionale Archeologico Cerite was inaugurated in 1967.
The Etruscans developed bucchero (a modern word), a unique kind of pottery. Its black fabric was given a glossy appearance by a particular method of firing, which makes the vases resemble bronze ones. 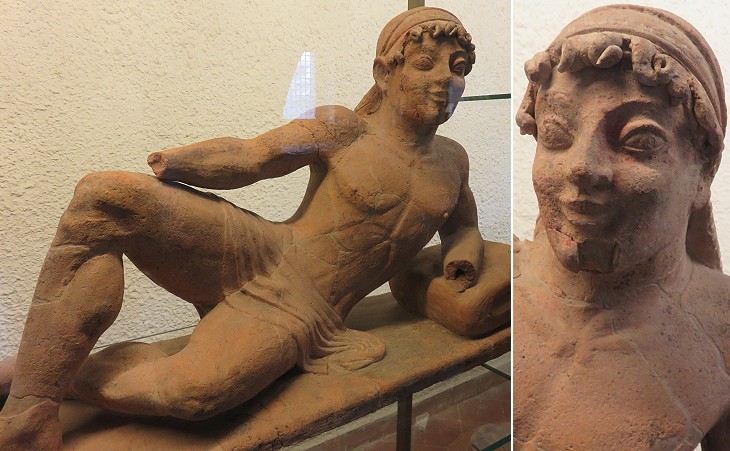 Museo Nazionale Archeologico Cerite: (left) lid of a terracotta cinerary urn portraying a young man; (right) detail of the face which is characterized by the "Etruscan smile"

Cremation was the ordinary mode of disposing of human corpses among the Etruscans; the image used as background for this page shows a small cinerary urn resembling a house. The cinerary urns were often placed inside sarcophagi, but the term should be applied only when the corpse is laid there to be eaten by the stone. It is more correct to say that they were placed inside larger containers together with a set of jewels, vases, weapons, etc.
The dead are often portrayed in terracotta Etruscan sarcophagi with a very intriguing smile on their face:

They are dead with all their vices
and all that is left
is the shadowy monomania of some cypresses
and tombs.

The smile, the subtle Etruscan smile still lurking
within the tombs.
From Trees by David Herbert Lawrence 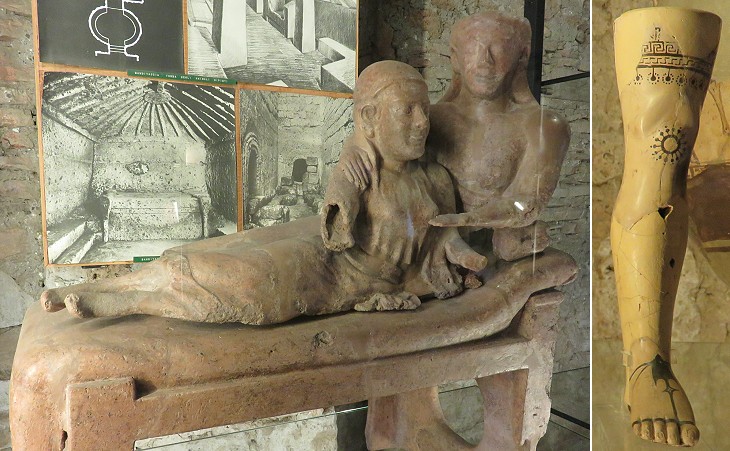 Museo Nazionale Archeologico Cerite: (left) lid of a terracotta cinerary urn found in 1965 and resembling Sarcophagus of the Spouses, the most famous work of art found at Cerveteri; (right) terracotta unguent container from Rhodes (VIth century BC)

All Troy then moves to Priam's court again,
A solemn, silent, melancholy train:
Assembled there, from pious toil they rest,
And sadly shared the last sepulchral feast.
Such honours Ilion to her hero paid,
And peaceful slept the mighty Hector's shade.

Closing lines of Homer's Iliad in the 1720 translation by Alexander Pope.

Banquets (see a fresco at Paestum) had an enormous importance in the funerary rites of the ancient Mediterranean civilizations and that applied to the Etruscans too. Funerary banquets were often painted on the walls of the sepulchral chambers as at the Tomb of the Leopards in Tarquinia and in most sarcophagi lids the dead were portrayed while attending their own funerary banquet. It was most likely from the Etruscans that the Romans developed their practice of holding banquets on the birthday of the dead. 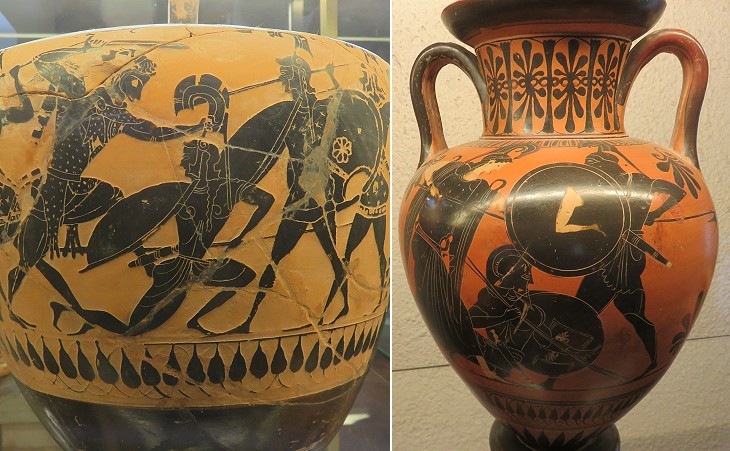 Museo Nazionale Archeologico Cerite: Greek vases with scenes of fights involving Hercules (left) and Penthesilea, Queen of the Amazons (right), who was eventually killed by Achilles

Kysry had trade links with Greece and in particular with the Greek colonies in Sicily. These links occasionally led to wars and in 384 BC the fleet of Dionysius, tyrant of Syracuse seized and pillaged Pyrgi, the main port of the town. In times of peace the Etruscans bought Greek vases with scenes of events which they became familiar with and other elaborate vessels as the unguent container from Rhodes shown before. 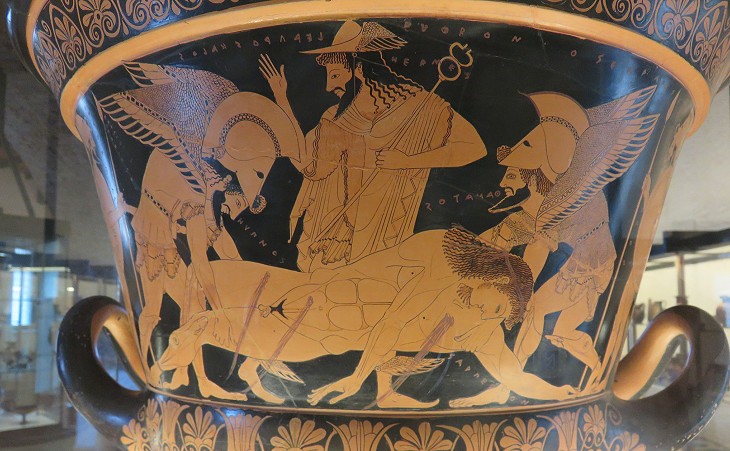 The vase is the only entire known work by Euphronios (535-470 BC), a leading Greek painter of the red-figure technique. The vase was looted in 1971 from a tomb near Cerveteri and eventually sold to the Metropolitan Museum of New York. In 2006, after Italian authorities demonstrated the illicity of the sale, the vase was returned to Italy and it is now on display at Cerveteri. The front scene shows an episode from Homer's Iliad involving Sarpedon, a prince of Lycia who was an ally of Troy.
Death of Sarpedon: Sarpedon's bright spear missed, the blade passing over Patroclus' left shoulder, leaving the man unscathed. But Patroclus hurled his bronze, in turn, and the spear sped from his hand and not in vain, striking Sarpedon where the ribs press on the beating heart. He fell as an oak, a poplar or lofty pine falls in the mountains, downed by the shipwrights with sharp axes as timbers for a ship. Down he tumbled, and lay stretched out at his horses' feet, groaning and clutching the blood-stained dust before his chariot.
Fight over Sarpedon's body: Then the beaten earth sent up a din of bronze and leather, of solid shields, like the resounding echo of axe-men in the mountain glades, while the warriors thrust at one another with keen swords and double-edged spears. No friend of his would have known the face of noble Sarpedon, veiled as he was from head to foot by dust and gore and lost in a hail of missiles. Round the corpse the warriors swarmed, as flies in the farmyard hum round the brimming pails, at milking time in spring.
Zeus' intervention: Now it was that Zeus, the Cloud Gatherer, called to Apollo: "Dear Phoebus, go now and carry Sarpedon out of range of the battle, and cleanse the black blood from his body, then lift him to some distant place, bathe him in running water, anoint him with ambrosia, clothe him in imperishable garments, and give him to those twin brothers Sleep and Death, who bear men swiftly away. They will soon set him down in the broad rich lands of Lycia. There his brothers and all his kin will bury him beneath barrow and pillar, since the dead are owed that privilege."
Iliad - Excerpts from Book XVI - Translation by A. S. Kline.
Sarpedon's gear was the prize offered by Achilles in one of the games for the death of Patroclus. 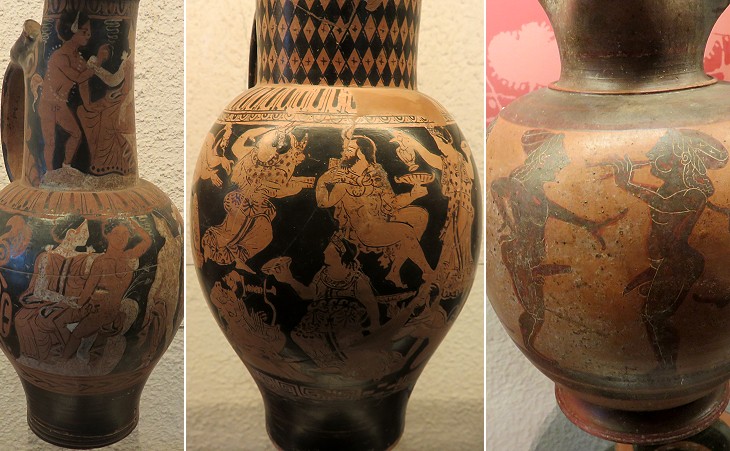 The decoration of some other vases found in the tombs near Cerveteri did not evoke the clangour of battles, but earthly pleasures and worldly enjoyment. Charun was the Etruscan warden of the access to the Underworld, similar to Greek Charon, but he was not portrayed as the ferryman across the Acheron River. In the statue found at Cerveteri he has heavy brow ridges, large lips and fiery eyes, but his usual iconography shows him holding a hammer (see a fresco at Tarquinia).
The Etruscans used nenfro, a local volcanic stone for their statues and reliefs; unfortunately it could not be easily worked and they often turned to terracotta for finer, but very fragile, results.

Visit the Main Necropolis of Cerveteri or return to your journey along Via Aurelia or move on to Corneto (Tarquinia), another town of Etruscan origin.