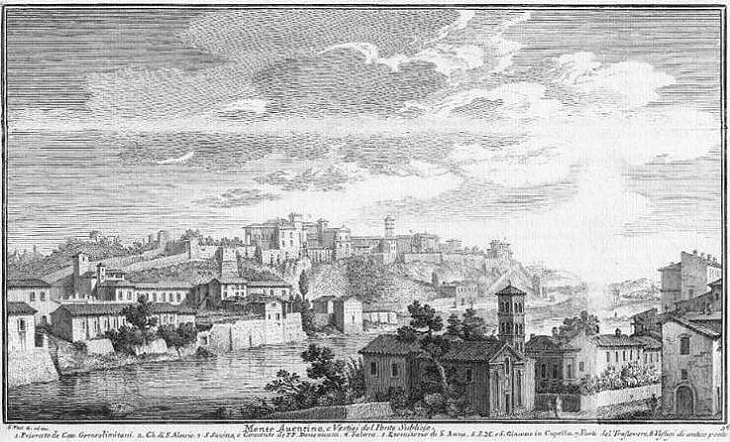 Giuseppe Vasi included some views of the River Tiber in his fifth book on the Wonders of Ancient and Modern Rome which he published in 1754. They are the only landscape-type plates he made, because he definitely preferred to focus on buildings and their architectural details.
This all embracing view of the Aventine Hill shows the medieval walls which prevented its monasteries from being attacked and in particular those of Rocca Savella (they are shown in the image used as background for this page).
The title of the plate refers also to the ruin of Ponte Sublicio, the first Roman bridge to cross the river.
The view is taken from the green dot in the small 1748 map here below. In the description below the plate Vasi made reference to: 1) Palazzo dei Cavalieri; 2) S. Alessio ; 3) S. Sabina; 4) Salara (salt-works); 5) Eremitorio di S. Anna; 6) S. Maria in Cappella; 7) Part of Trastevere; 8) Ruin of Ponte Sublicio. 1), 2) and 3) are shown in detail in other pages. The small map shows also 9) Casino di Donna Olimpia. 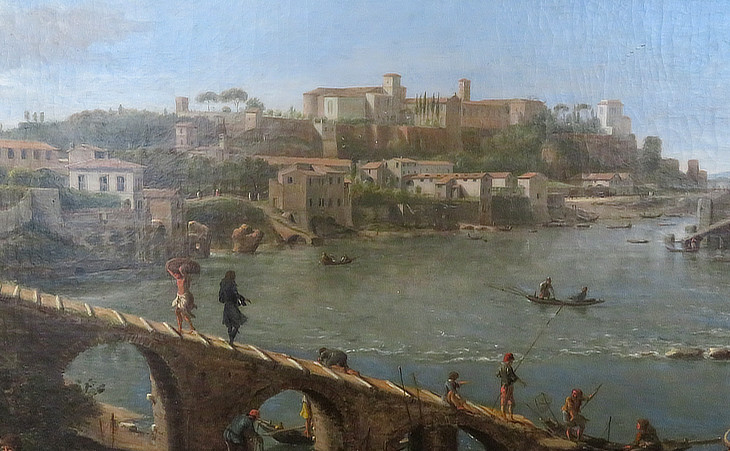 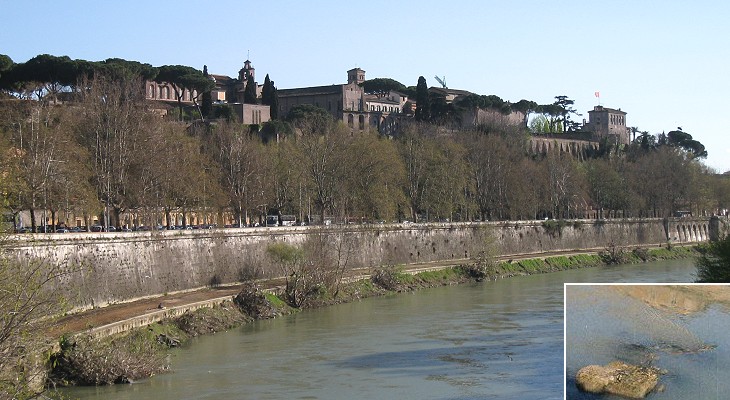 After the very damaging flood of Rome which occurred in December 1870, the Italian government took steps to protect the city; these included the enlargement of the river bed and the construction of high walls. The view over the top of the Aventine hill however is almost unchanged, although a section of the monastery of S. Sabina which stood on the edge of the hill was pulled down when the church was restored in the early XXth century.
Ponte Sublicio is associated with an episode of the war between Romans and Etruscans; at that time it was made of timber, but later on it was rebuilt in stone; it was maintained until the Vth century AD; the pillars which supported it were visible until 1878, when they were blown up to facilitate the flow of the river; today they can be seen only when the level of the water is very low.

View of the lower part of the hill from Lungotevere Aventino

The construction of the walls and of the lungotevere, led to the disappearance of small mills, salt-works and other establishments which made use of the river as a source of energy.

The detail of the plate shows the ruins of ancient walls which strengthened the foundations of the buildings on the edge of the hill. In addition to them there are some more recent ruins in a nearby open air depot, which probably was meant to be a temporary solution to a shortage of space in the warehouses of the Museums of Rome. 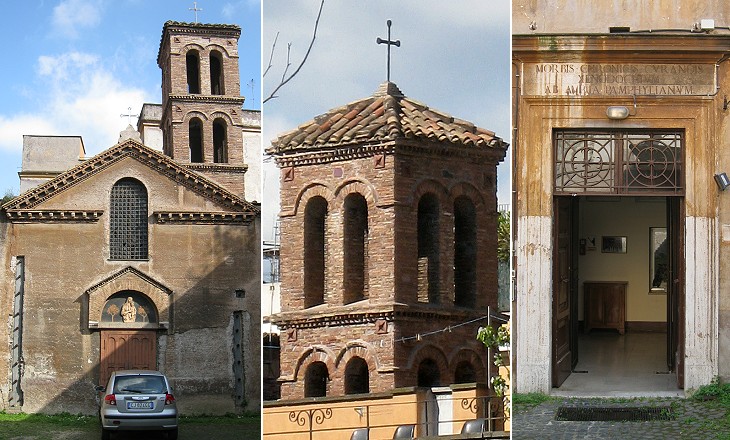 (left/centre) S. Maria in Cappella and detail of its bell tower; (right) entrance to the XIXth century hostel for the chronically sick (in Latin "Morbis Chronicis Curandis Xenodochium")

The small church of S. Maria in Cappella was built in the XIth century, but it has undergone too many changes; in the XIXth century its façade was given a very unassuming medieval appearance.
In 1653 Pope Innocent X assigned the church to his own family and in particular to Donna Olimpia Maidalchini Pamphilj, his sister-in-law. 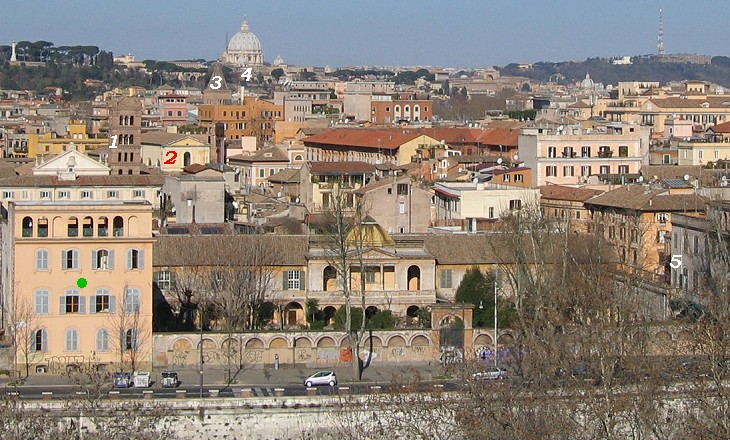 Former Casino di Donna Olimpia (it stood on the site of the building marked with a green dot). The photo was taken from Rocca Savella (Giardino degli Aranci) on the opposite side of the river and it shows in the background: (left to right): 1) bell tower of S. Cecilia; 2) S. Giovanni Battista dei Genovesi; 3) bell tower of S. Grisogono; 4) S. Pietro and 5) bell tower of S. Maria in Cappella

Donna Olimpia built a casino (a small building) overlooking the river which was surrounded by a large garden. In 1846-859 the Pamphilj modified their property by adding new buildings which were designed by Andrea Busiri Vici. The new facilities housed a hostel for the chronically sick. The redesign of the river bed in the 1880s entailed the pulling down of the casino. 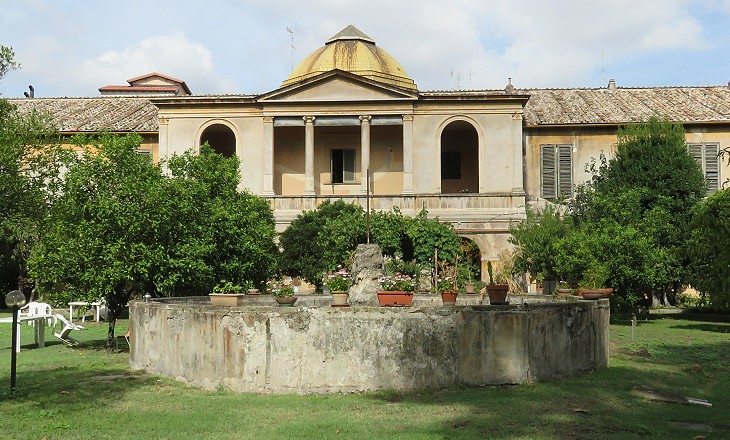 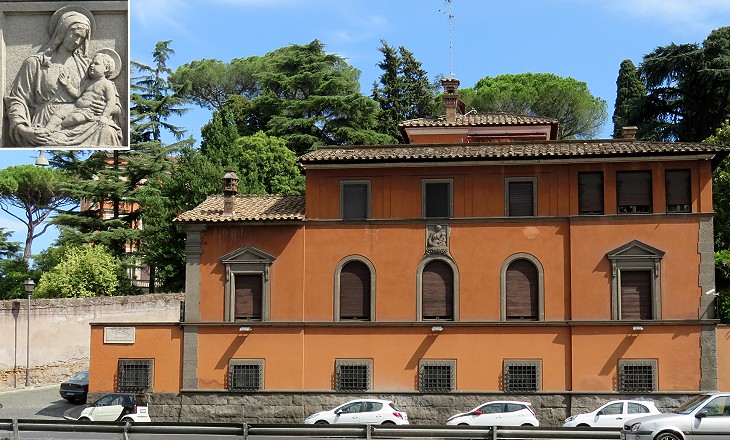 Modern building near the previous site of S. Anna; (inset) detail of its "madonnella" (sacred image)

According to Vasi in 1761 S. Anna belonged to the monastery of S. Sabina and it was closed. Other sources indicate that it belonged to the hosiers' guild and that it was rebuilt in 1745 (see a directory of churches belonging to a guild). The modern building which replaced it retains some memory of the church in the madonnella which portrays St. Anne with the Child (you may wish to see other sacred images in the streets of Rome). It is situated at the beginning of Clivo di Rocca Savella, one of the silent streets of Rome.