S. Maria in Cosmedin
(Vasi at work in the Grand View of Rome) 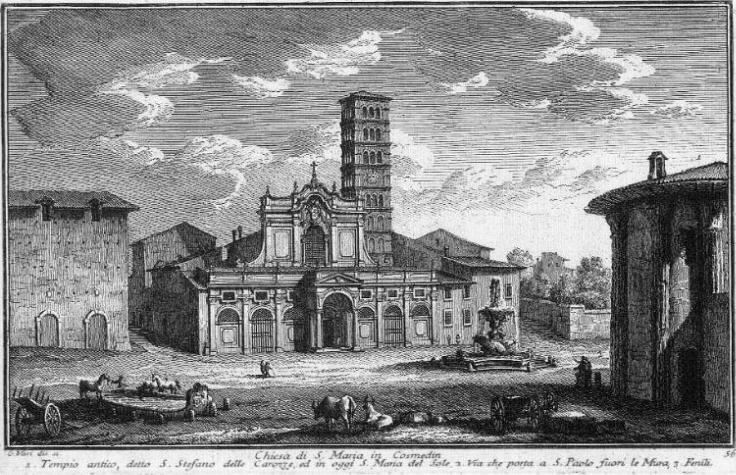 In 1753, when Giuseppe Vasi published this etching, a weekly cattle market was held at Campo Vaccino, on the site of the ancient Roman Forum, which is not far from S. Maria in Cosmedin. This explains the presence of cows, horses, haylofts and of a watering trough in this plate.
The view is taken from the green dot in the small 1748 map here below. In the description below the plate Vasi made reference to: 1) Temple used as a church (S. Stefano delle Carrozze/S. Maria del Sole); 2) Street leading to S. Paolo fuori le mura; 3) Haylofts. The small map shows also 4) S. Maria in Cosmedin; 5) Palazzo Diaconale di Papa Niccolò I. 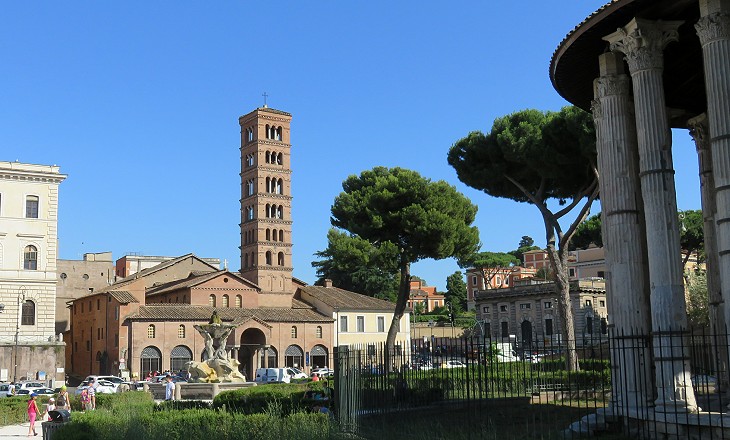 In the plate S. Maria in Cosmedin had an elaborate façade which was designed by Giuseppe Sardi in 1718, during the pontificate of Pope Clement XI. In the 1890s this addition was pulled down in an attempt to restore the appearance the church had in the XIIth century and the street leading to S. Paolo fuori le Mura was replaced by a lungotevere, a tree-lined avenue along the river. In the 1920s the site of the haylofts was used for a huge white building and at the same time the street in front of the church was widened (Via del Mare) and the fountain and the trough were moved from their original location. 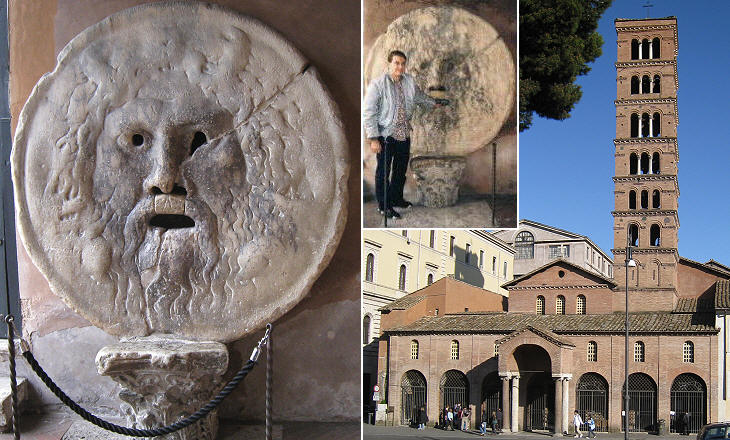 In the Porch of this Church stands a great round stone, cut into the face of a Man, with a great wide mouth, commonly called, La Bocca della Verità, the mouth of truth; but this not being affirmed by the mouth of truth, I dare not believe it: I rather believe it served in some old building for a Gutter spout: I know truth may speak loud and have a wide Mouth; but he that takes every wide mouth for the mouth of truth is much mistaken.
Richard Lassels' The Voyage of Italy, or a Compleat Journey through Italy in ca 1668
In recent years Bocca della Verità has become a "must see" in most tours of Rome and Hop-on-hop-off buses stop at the church. The reason for this interest lies in an ancient circular relief which was placed in the porch in 1632; most likely it was the slab of a drain of nearby Cloaca Massima; it portrays a human face with an open mouth which is believed to close upon the hand of any perjurer. 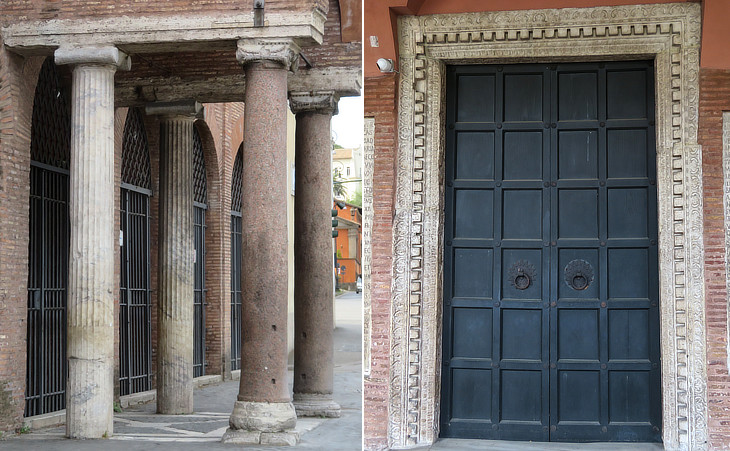 Records about the church say that it already existed in the VIth century when it was used by the Greek officers of the Byzantine administration of Rome; for this reason it was called in Schola Graeca. In 782 it was enlarged and embellished by Pope Adrian I and at this time it was called Kosmidion (embellishment in Greek), the origin of the church's current name.
It was damaged in 1084 when Robert Guiscard sacked Rome; its porch with four ancient columns and the marble decoration of the main door are part of the restoration which followed that event. It is worth highlighting that the marble frame is not made up of ancient elements, but is an original medieval work. 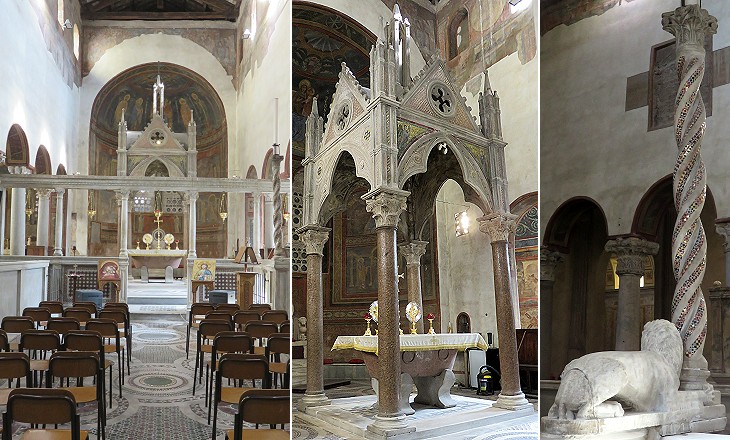 The 1890s redesign of the church brought back its interior to its assumed medieval aspect. The finely decorated canopy was made in 1294, whereas the Easter chandelier comes from another unknown church and was moved to S. Maria in Cosmedin in 1716. 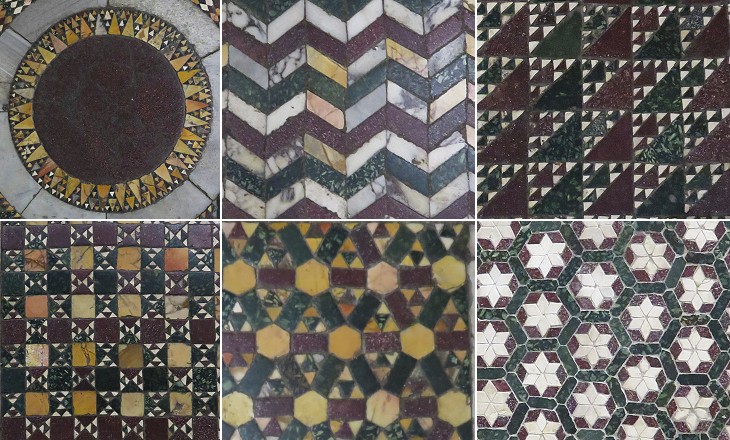 The pavement of the church has a very fine XIIth century decoration, which however is largely the result of the 1890s restoration. As a matter of fact the floor does not show much evidence of damage which occurs naturally over the passage of time, unlike that of S. Benedetto in Piscinula. (left) VIIIth century mosaic from S. Pietro Vecchio in the sacristy. It was moved to S. Maria in Cosmedin in 1639; (right) IIIrd century AD column which belonged to "Statio Annonae" (office for the distribution of basic commodities), a Roman building upon which the church was erected

On the right side of the church Pope Nicholas I (858-867) built a small palace which he used as a temporary residence; it was fortified with an external wall for fear of raids by the Saracens; later on it was converted into a small monastery and some of the rooms were assigned to the deacon of the church. It has a XVth century window similar to those of Palazzo Venezia. It was eventually turned into a hayloft. (left) The temple; (right-above) the sacred image which gave the name to the church; (right-below) a column

On the other side of the great Piazza stands the Church of St. Steven. Its rounded with chanelled Pillars. It was antiently the Temple of Juno Matutina, Morning Juno, or Alba Dea, the break of Day Goddess: A Goddess which our Ladies that never rise till noon, would never have been devout to. Lassels
The temple of Vesta is on the Tiber. It is not unlike an hour-glass - or a toad-stool; it is small, but exceedingly beautiful, and has a look of great antiquity.
William Hazlitt - Notes of a Journey Through France and Italy in 1824-1825
This ancient temple was shown by Vasi also in plate 94 and plate 95. Owing to its circular shape it was generally thought to be dedicated to Vesta, but the real temple to the goddess of the sacred fire was found during the excavations of the Roman Forum in the late XIXth century. It has now been identified with a temple dedicated to Hercules (Aedes Herculis Victoris): the demigod/hero was involved in a legendary episode of the history of Rome which took place in this part of Rome. He was celebrated also in nearby Arco degli Argentieri.
The temple was built in the IInd century BC and it was one of the first Roman buildings where Pentelic marble was used; it was restored by Emperor Tiberius and on that occasion Lunense marble was employed to replace some columns. During the Middle Ages the temple was turned into a small church dedicated to St. Stephen. According to tradition it was named S. Maria del Sole after a sacred image of the Virgin Mary was found in 1560 on the nearby river bank; the painting sent out rays of light (It. sole means sun). 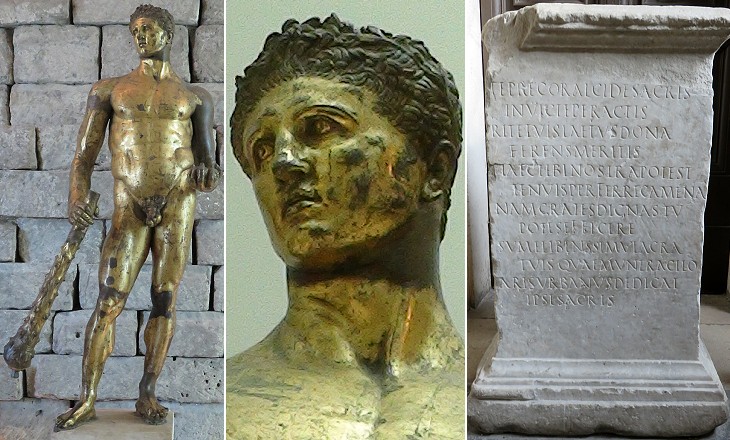 Musei Capitolini: (left/centre) statue of Hercules which was found near the temple at the time of Pope Sixtus IV (see another famous gilded statue of Hercules); (right) inscription with a prayer to Hercules, descendant of Alcaeus, by L. Fabius Cilus Septiminus, consul in 204 AD; you may wish to see the Temple to Hercules at Ostia

This beautiful gilded bronze statue of Hercules departs from the traditional iconography (it opens in another window) because the hero is portrayed without the skin of the lion he killed in his first labour and because he is clean shaven, rather than bearded. If it were not for the club and the three apples he holds in his left hand (a reference to his labour in the Garden of the Esperides) the statue could as well depict a wreathed winner of ancient games. 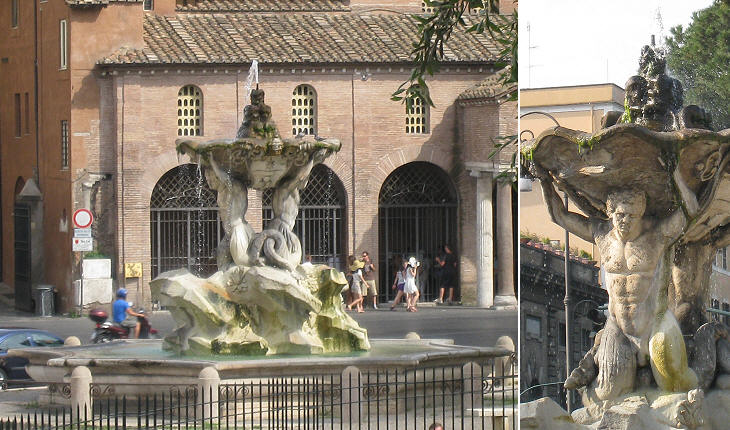 The fountain was commissioned by Pope Clement XI. It was designed by Carlo Francesco Bizzaccheri and its subject recalls Fontana del Tritone by Gian Lorenzo Bernini. Bizzaccheri was a talented architect, but the faces of the two tritons by Francesco Moratti are expressionless.
The basin has the shape of a star and the tritons support a shell with inside a mountain; a star and a mountain were the heraldic symbols of the Pope, whose coat of arms was carved on both sides of the shell (you can see it in the image used as background for this page).

The watering trough which is shown in the plate was relocated to a small garden near the river.