Chiesa di S. Grisogono
(Vasi at work in the Grand View of Rome) 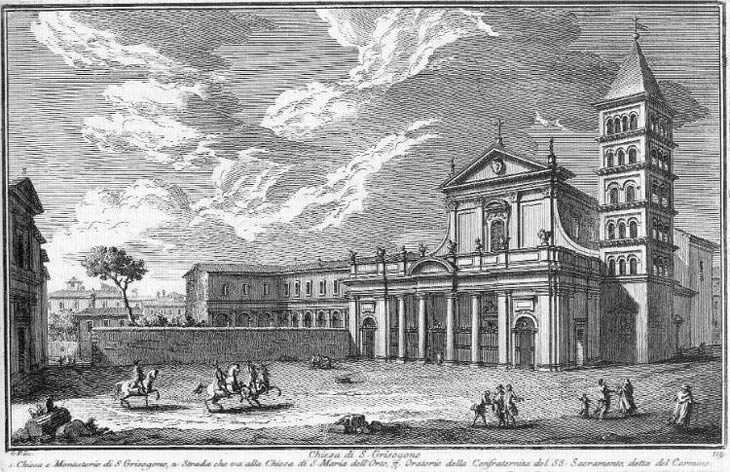 Giuseppe Vasi wrote in the opening statement of the text accompanying this 1756 etching: Non è inferiore alle primarie basiliche la magnificenza di questa chiesa (The magnificence of this church is not inferior to that of the main basilicas of Rome) as if he wanted to apologize for having included S. Grisogono in Book 6, which covered parish churches, rather than in Book 3, which was dedicated to the most important basilicas of Rome and was published in 1753.
The view is taken from the green dot in the small 1748 map here below. In the description below the plate Vasi made reference to: 1) S. Grisogono (more commonly S. Crisogono); 2) Street leading to S. Maria dell'Orto; 3) Oratorio della Confraternita del SS. Sacramento. The map shows also: 4) S. Bonosa; 5) S. Agata in Trastevere; 6) Torre degli Anguillara; 7) Nuova Fabbrica del Tabacco (approximate location); 8) S. Eligio dei Sellai. 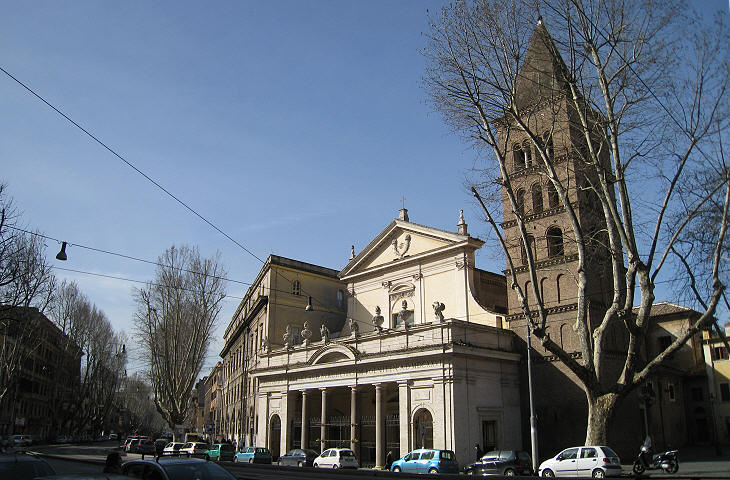 S. Grisogono with its tall bell tower was a landmark of Trastevere, a characteristic which is even truer today than it was in the XVIIIth century. The church was located in a small square along the east-west street which crossed the whole neighbourhood from Ponte Rotto to Porta S. Spirito with slightly different names (Via della Lungarina, Via della Lungaretta and Via della Lungara).
In 1888 Ponte Giuseppe Garibaldi, a new bridge, linked Trastevere to the rest of Rome; the bridge became the starting point of a tree-lined avenue (Viale del Re, today Viale Trastevere) perpendicular to Via della Lungaretta and which crossed the neighbourhood from north to south; this led to pulling down most of the monastery adjoining S. Grisogono; a few years later Oratorio della Confraternita del SS. Sacramento was also demolished.
Because of these changes S. Grisogono greatly gained in visibility, but on the negative side it must be said that on some days the noise of the traffic can be heard inside the church. 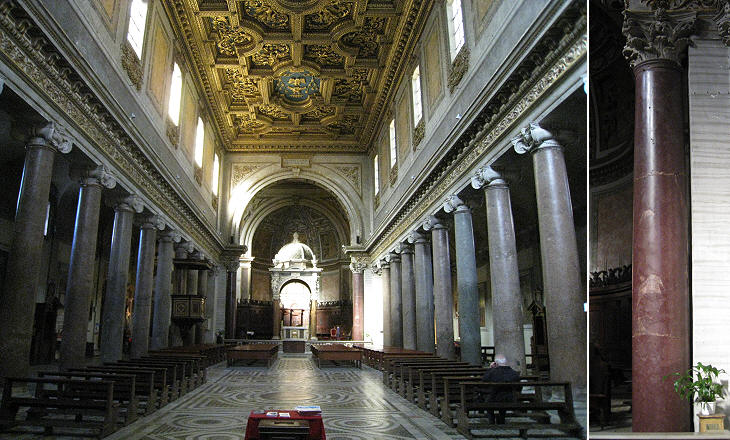 (left) Interior; (right) one of two ancient porphyry columns at the end of the main nave

St. Chrysogonus, Bishop of Aquileia, at the time an important town in north-eastern Italy, was put to death by Emperor Diocletian. The foundation of the church dedicated to him is dated Vth century; in the VIIIth century the floor of the church was raised by five feet to reflect the new level of the surrounding ground which had been modified by river floods. In 1123-129 the church was entirely rebuilt by Cardinal Giovanni da Crema who raised its level by another fifteen feet and added the imposing bell tower.
The design of the church is similar to that of the early great basilicas and it served as an example for nearby S. Maria in Trastevere a few years later. The granite and porphyry columns which were used in the construction are thought to have belonged to baths built by Emperor Septimius Severus in Trastevere, although their exact location has not been identified.
In 1489 Pope Innocent VIII assigned S. Grisogono to the Carmelites. 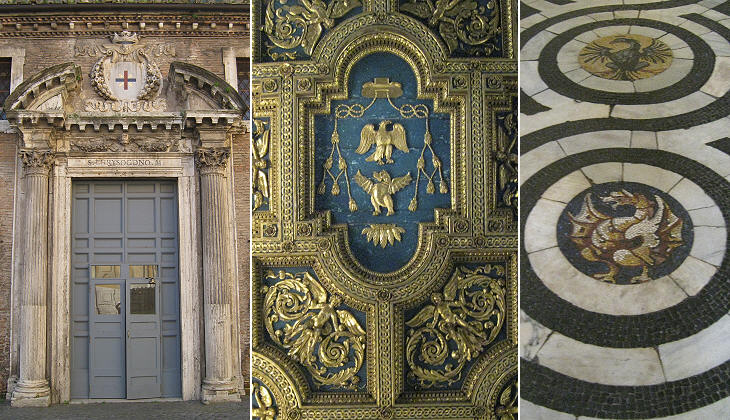 Between 1620 and 1627 Cardinal Scipione Borghese, nephew of Pope Paul V, commissioned Giovan Battista Soria to redesign the church, chiefly its façade and ceiling. The bell tower was modified by the addition of a pyramidal spire, similar to that of S. Maria Maggiore; the added weight however led to closing the windows of the lower storeys, in order to strengthen the construction.
You may wish to see the church before these changes in a 1588 Guide to Rome. 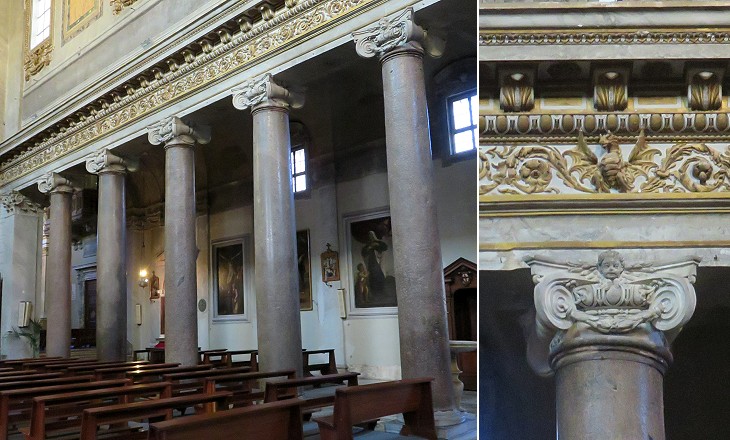 In 1535 a wooden statue of the Virgin Mary was found in the River Tiber and it was brought to the Carmelite friars of S. Grisogono: it was soon declared patroness of Trastevere. In 1629 Cardinal Borghese built Oratorio della Confraternita del SS. Sacramento, a chapel opposite S. Grisogono, to house the statue which was popularly known as Madonna de Noantri (Our own Madonna). Once a year in July it was carried to S. Grisogono at the end of a long procession which continues to take place. (left) Canopy designed by Soria; (right) ceiling with "Glory of St. Chrysogonus" by il Guercino (it is a copy: the original was stolen in 1808 and it now decorates the Long Gallery of Lancaster House in London

The dedication of such a large church to a bishop of Aquileia led some art historians to suggest that in origin it was built by a rich man called Chrysogonus (the name means born out of gold) and only at a later time it was associated to the saint. The traditional account about this saint makes reference also to St. Anastasia, another non-Roman martyr to whom an early church was dedicated in Rome.
St. Anastasia is represented as a noble Roman lady, who perished during the persecution of Diocletian. She was persecuted by her husband and family for openly professing the Christian faith, but being sustained by the eloquent exhortations of St. Chrysogonus, she passed triumphantly, receiving in due time the crown of martyrdom, being condemned to the flames. Chrysogonus was put to death with the sword and his body thrown into the sea. According to the best authorities, these two saints did not suffer in Rome, but in Illyria.
Augustus J. C. Hare - Walks in Rome - 1875 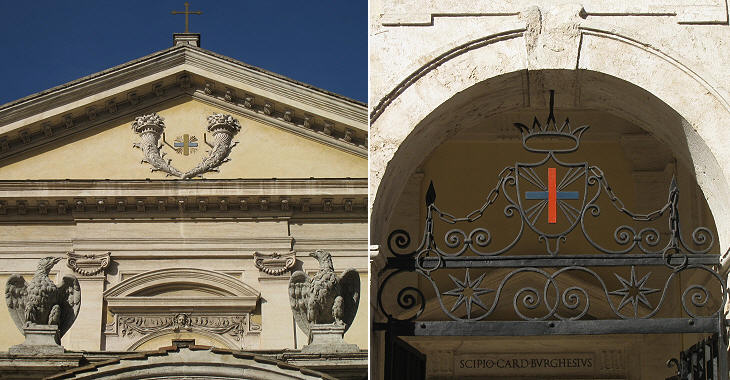 In 1847 Pope Pius IX assigned S. Grisogono to the Trinitarians, who removed the coats of arms of Cardinal Borghese from the façade and the side entrance and replaced them with a red and blue cross, the symbol of their order. Red indicates the divine nature of Christ and blue the human one. The church is still officiated by Trinitarian fathers. 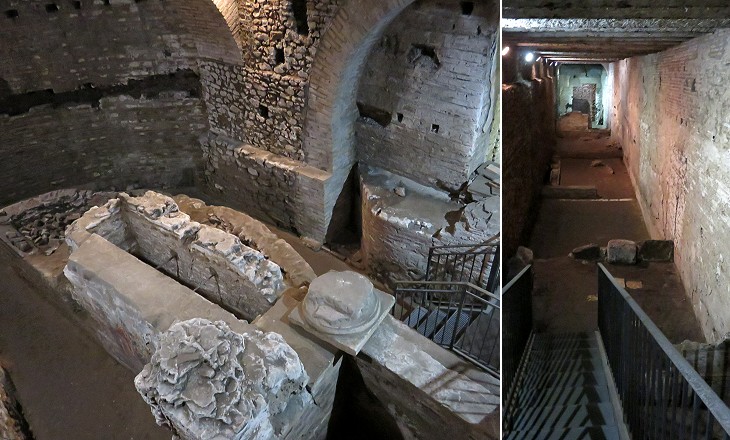 That the church stood upon an earlier one was already known at Vasi's time, but only in 1907 it was possible to undertake a limited excavation campaign and to identify some ancient walls. Other excavations were made in the 1920s. Archaeologists however had to limit their work in order not to endanger the stability of the church. A hall to the side of what presumably was the apse of the early basilica might have been a fullonica, a cloth cleansing establishment; one of its basins was eventually used for full immersion baptisms. 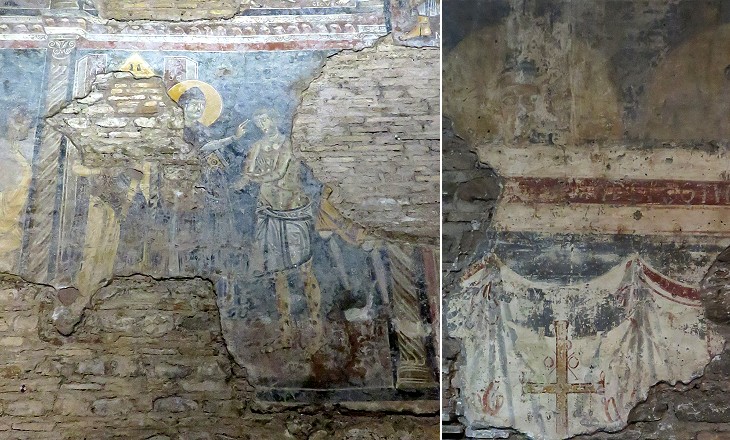 Xth century frescoes in the long "corridor": (left) St. Benedict heals the leper, an event reported by St. Gregory the Great; (right) decoration of the lower part of the walls

The most interesting finding of the excavation campaigns is not related to the early basilica, but to the VIIIth century church. Its right wall was decorated with frescoes depicting events of the life of St. Benedict and miracles by other saints. Today the frescoes are located in a sort of corridor because of an opposite wall which was built in the XIIth century to support the new church. 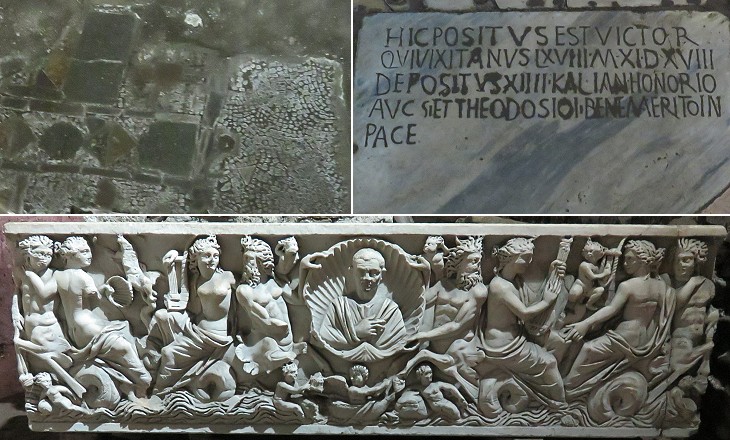 (above-left) Fragment of a Xth century floor mosaic; (above-right) late IVth century Christian gravestone; (below) IInd century AD sarcophagus; it is decorated with a "sea thiasos", a Dionysiac procession in which tritons and sea nymphs replace satyrs and maenads; it is almost identical to one found at Porta Pinciana. The relief was not regarded as an obstacle to the Christian reutilization of the sarcophagus; you may wish to see a page covering the manufacturing of sarcophagi 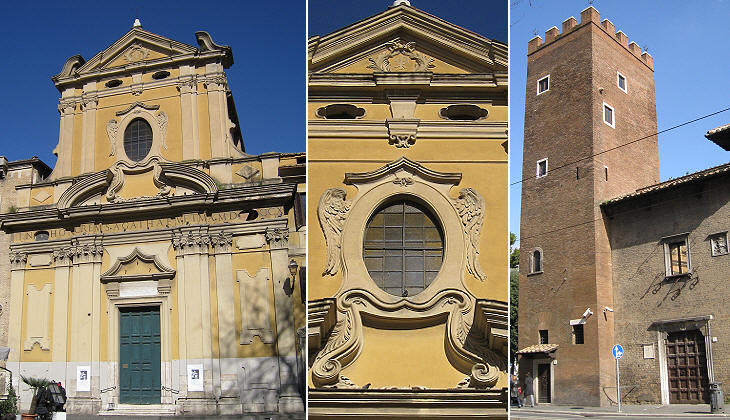 S. Agata was built in the XIIth century, but it was entirely renovated between 1671 and 1711; the façade by Giacomo Onorato Recalcati has several references to works by Francesco Borromini (in particular the role given to stucco decorations). The church belonged to several brotherhoods; in 1908 it was assigned to that of Oratorio del SS. Sacramento and Madonna de' Noantri was relocated to this church, which became the starting and ending point of the procession.
The Anguillara, named after a fief they had near Bracciano, were a very prominent family in the XIVth and XVth centuries, but subsequently they lost importance. They had their house-fortress in Trastevere. In 1887, when the building was bought by the City of Rome, it was very run down and it housed a workshop for enamels and painted glasses. In the next fifteen years major modifications were made to turn it into a conference hall for lectures on the works of Dante Alighieri (the building is aka Casa di Dante); only the tower retained its original appearance, with the exception of the added battlements. The website of Casa di Dante (external link) has several images of the building before and after the restoration. 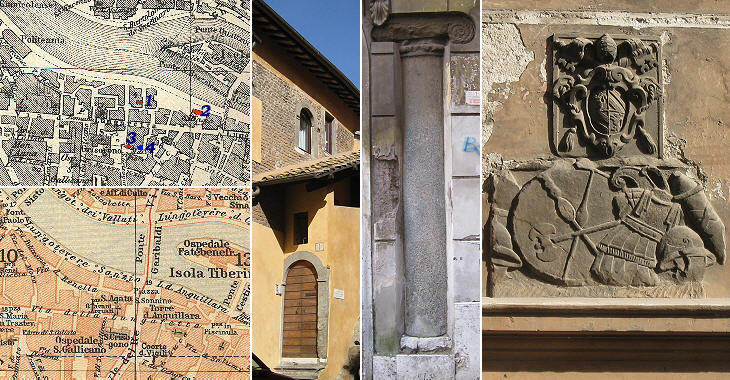 (left-above) 1870 ca map: 1) S. Bonosa; 2) S. Eligio dei Sellai; 3) Oratorio della Confraternita del SS. Sacramento; 4) site of the "excubitorium" (barracks) of VII Coorte dei Vigili; (left-below) 1924 map; (centre) a restored medieval house and a column of a medieval porch in the proximity of S. Grisogono; (right) coat of arms of Pope Pius IX and a fragment of a relief above the modern entrance to the "excubitorium"

The enlargement of the river bed in the 1880s led to pulling down the church of S. Bonosa which was built on the assumed site of the house of the martyr, a woman who was executed at the time of Emperor Aurelian. The church which was pulled down was a XIIth century building, which was widely modified in the XVIIIth century when it belonged to the cobblers' guild; the cobblers dedicated S. Bonosa also to Sts. Crispin and Crispinian, their patron saints.
In 1902 the church of S. Eligio dei Sellai was pulled down because of its precarious condition; it was an XVIIIth century building designed by Carlo de Dominicis for the farriers' guild. Two other Roman churches are still dedicated to St. Eligius: S. Eligio dei Fabbri (blacksmiths) and S. Eligio degli Orefici (goldsmiths).
In 1866 excavations in a garden behind Oratorio del SS. Sacramento led to the discovery of ancient barracks at some twenty feet below the current ground level. The barracks belonged to the Vigiles, a body of fightfighters/policemen set up by Emperor Augustus; each of its seven units (cohorts) was responsible for patrolling two of the 14 regiones into which Rome was divided. The VIIth Cohort controlled Regio XIV - Transtiberim and Regio IX - Circus Flaminius. Unfortunately the mosaics which decorated some of the rooms were lost during WWII. You may wish to see the barracks of the Vigiles at Ostia. 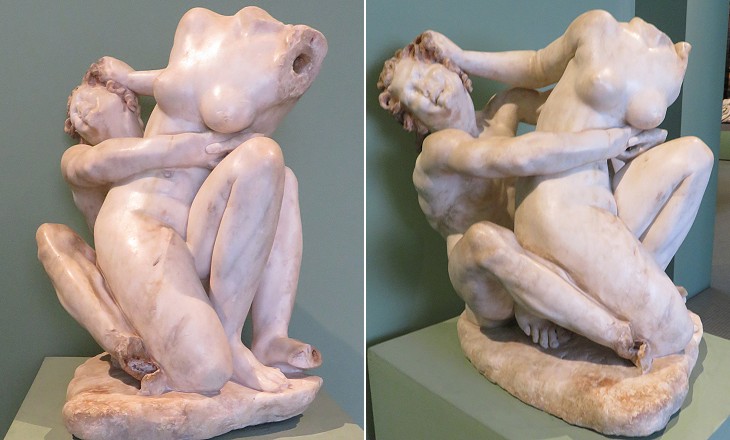 Centrale Montemartini: Satyr assaulting a nymph: copy of a statue from Pergamum (IInd century BC) which was found in 1889 near S. Grisogono; you may wish to see some famous Roman copies of statues from Pergamo. i.e. the Dying Galatian, the Ludovisi Gaul and the Persian Warrior 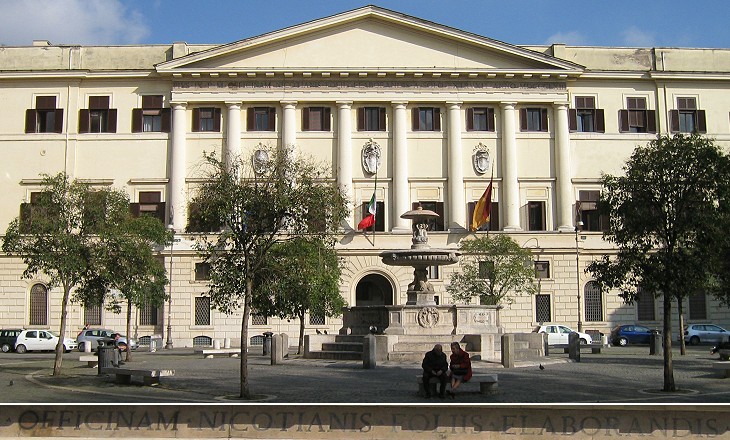 (above) Façade of the former tobacco factory; (below) detail of the inscription

This imposing building by Antonio Sarti, the architect of a similarly designed church at Terracina, has a vague resemblance to the Colonnade du Louvre in Paris, owing to its colonnade above a high base. The Latin inscription adds to its importance: PIUS IX P. (ontifex) M. (aximus) OFFICINAM NICOTIANIS FOLIIS ELABORANDIS A SOLO EXTRUXIT ANNO MDCCCLXIII.
It means that the building was a tobacco factory (Nicotianis foliis is a reference to the tobacco leaves introduced in Europe by French diplomat Jean Nicot). In 1863 Pope Pius IX moved to this site the tobacco factory which had been initially located near S. Maria dei Sette Dolori. The fountain at the centre of the square was designed by Andrea Busiri Vici in the same period.

Next plate in Book 6: S. Giacomo a Scossacavalli.
Next step in Day 6 itinerary: Ponte Sisto.