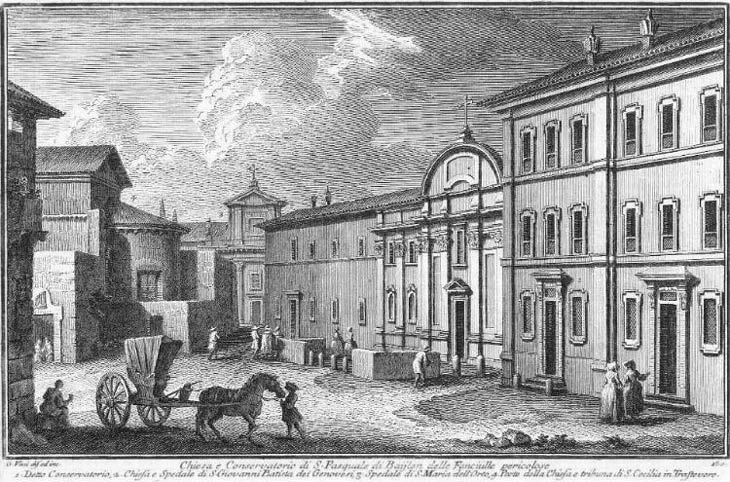 In 1758 Giuseppe Vasi published a book on the Roman nunneries which was illustrated with 20 etchings. The last plate does not depict a nunnery, but a house aimed at protecting young women (fanciulle) from the dangers (pericoli) of life in Rome, including those who had experienced these dangers and were seeking redemption. The building was completed in 1747 and during its construction ancient inscriptions making reference to Bona Dea, a mysterious Roman goddess, were found. Similar to a nearby church, it was dedicated to St. Paschal Baylon, a XVIth century Spanish Franciscan monk who was canonized in 1690. In Italy, most likely because his surname (It. Bailonne) rhymed with donne (women), he was the object of a particular devotion by women in search of a husband.
The plate shows also a church (S. Giovanni Battista) and other premises which belonged to the brotherhood of the inhabitants of Genoa in Rome (the image used as background for this page shows the coat of arms of that city).
The view is taken from the green dot in the 1748 small map below. In the description below the plate Vasi made reference to: 1) Conservatorio di S. Pasquale; 2) S. Giovanni Battista dei Genovesi; 3) S. Maria dell'Orto; 4) Part of S. Cecilia. 4) is shown in another page. The map shows also: 5) S. Salvatore della Corte; 6) Spedale di S. Maria dell'Orto; 7) Arco de' Tolomei. 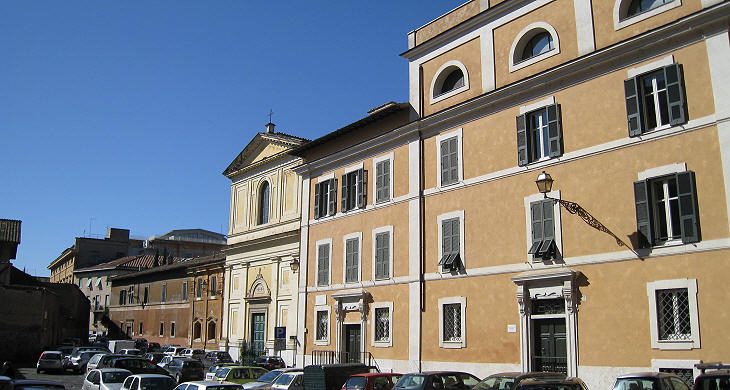 Both buildings were modified during the XIXth century (only the two windows adjoining the church have retained their original design).
In the former conservatory of S. Paschal, in Trastevere, there now exist four pious institutions, established there by Leo XII, that is, a house to which elderly females may retire from the world by paying a small pension, a boarding school for respectable females, who pay very moderate board wages; a house of retreat for young females before their first Communion; and a gratuitous female school, containing 70 pupils.
Rev. Jeremiah Donovan - Rome Ancient and Modern - 1842
In the 1990s the building was assigned to a University College; changes made to the interior of the building led to unearthing mosaics of an ancient Roman house. 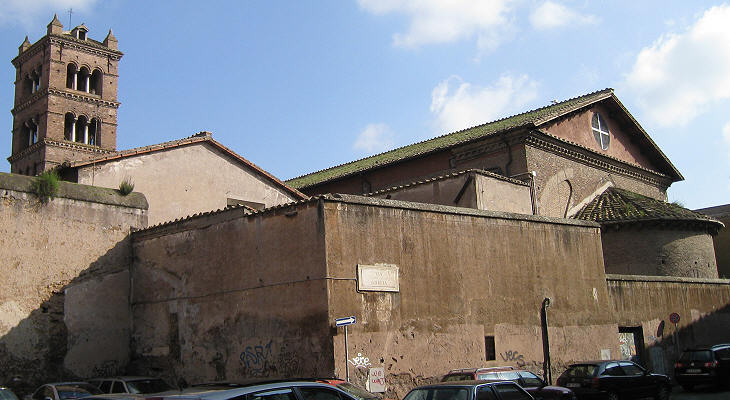 Leaning bell tower and apse of S. Cecilia in April 2009

It is difficult to include in the same image all the buildings shown in the plate because Vasi took his view from the north-eastern side of the square; in order to show the apse of S. Cecilia with a proper light it is necessary to take an additional photo in the afternoon.
S. Maria dell'Orto is today hidden by modern buildings, but also at Vasi's time only its tip was visible. 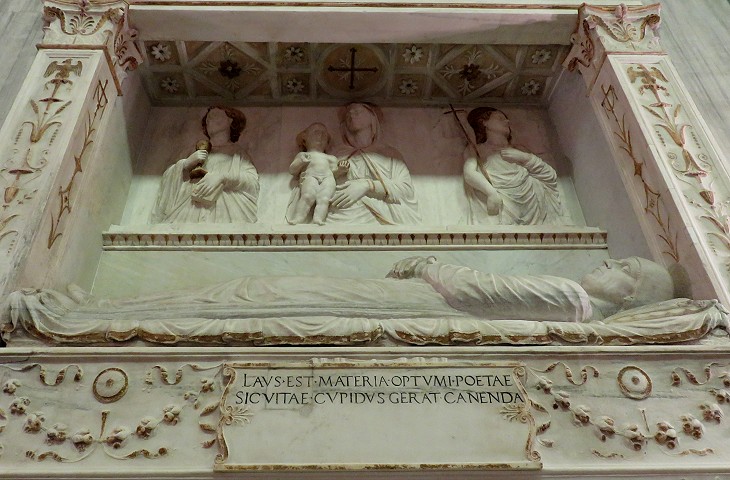 Meliaduce Cicala was a rich Genoese banker and merchant who was assigned lucrative businesses and positions by Pope Sixtus IV who was born at Savona, a port very near Genoa. He died in 1481 and he bequeathed a large amount of money and some estates for the foundation of a hospital for Genoese seamen. The site chosen was relatively near Porto di Ripa Grande, the river harbour of Rome. The initiative was supported by Cardinal Giovanni Battista Cibo from Genoa who was elected Pope Innocent VIII in 1484.
In 1553 the management of the hospital and of the adjoining church was assigned to a brotherhood among the inhabitants of Genoa in Rome. In 1576 Pope Gregory XIII granted them the right to free once a year a sentenced to death convict, a privilege which was already enjoyed by the Florentine brotherhood of S. Giovanni Decollato. You may wish to see a directory of national churches in Rome. 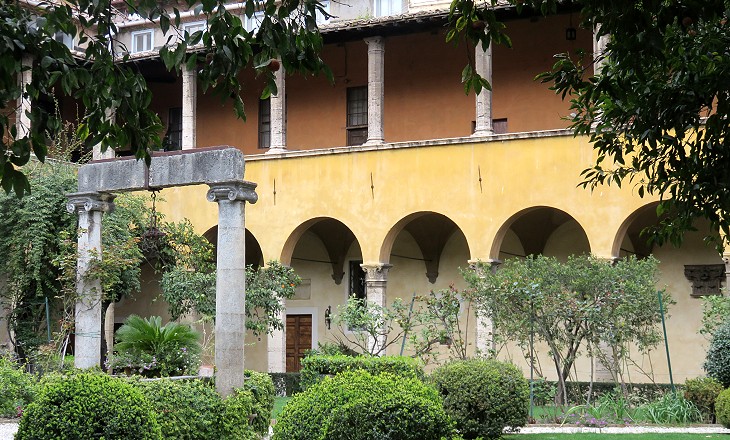 The hospital ceased to operate in 1704. Its facilities were utilized by the brotherhood. This body underwent some legal modifications after the annexation of Rome to the Italian State in 1870, but it still owns the complex. The church was almost entirely redesigned in 1843-1876, while the large courtyard of the former hospital retains most of its original Renaissance design. 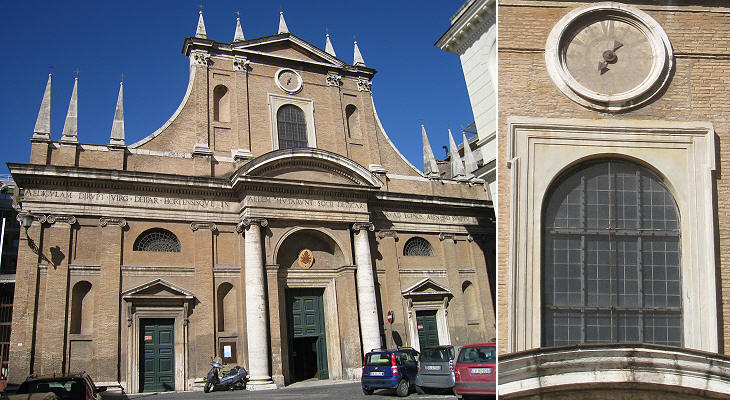 S. Maria dell'Orto was built to house an image of the Virgin Mary which was painted on the wall of a kitchen garden (It. orto) and which was believed to have prompted the healing of a very sick man in 1488. In 1492 a brotherhood was established for the conservation of the image which was first moved to a small chapel and in 1556 to this church. A number of architects (Guidetto Guidetti, il Vignola, Francesco da Volterra) contributed to its design. You may wish to see its façade in a 1588 Guide to Rome. 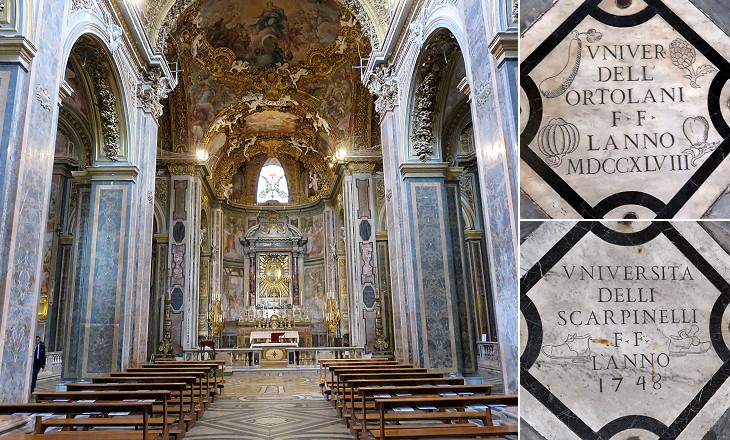 (left) Interior; (right) symbols of the guilds of greengrocers and makers of working shoes

The brotherhood acquired importance because members of minor guilds joined it; in particular those which had some symbolical link to the rural location where the holy image stood, e.g. greengrocers (ortolani) and fruit sellers (fruttaroli). Eventually twelve guilds supported the brotherhood. 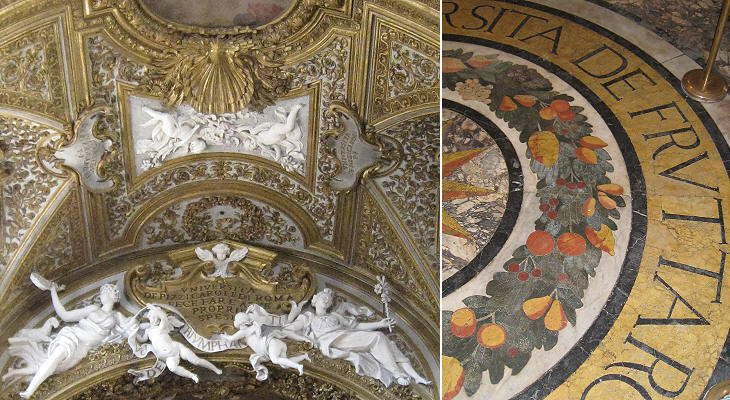 The guilds managed to lavishly decorate the interior by joining their forces. The brotherhood owned a large number of houses in Rome and thus could rely on a substantial income. Property tablets with the image of the brotherhood can still be seen on many Roman buildings. 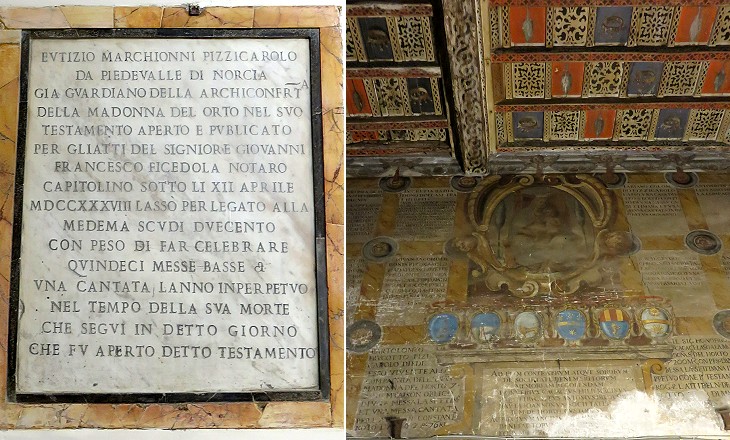 (left) Inscription stating that a donation of 200 "scudi" (the currency of the Papal State until 1866) was made by a grocer from Norcia in return of 15 Low Masses and one High Mass every year; (right) wall of a side room with painted inscriptions related to donations in return for masses

Some, whose circumstances do not permit them to bestow much, confine all the expence they can afford in charity, to the single article of purchasing masses to be said in behalf of those who have died without leaving a farthing to save their souls. (..) What is the relieving a few poor families from the frivolous distresses of cold and hunger, in comparison of freeing them from many years burning in fire and brimstone? People are reminded of this essential kind of charity, not only by the preachers, but also by inscriptions upon the walls of particular churches and convents.
John Moore - A View of Society and Manners in Italy - 1781
The brotherhood did not rely on major donations from cardinals and high members of the Papal Court. It had a well oiled mechanism for receiving minor donations from its own members. Their contributions were acknowledged in the premises of the church together with the commitment by the brotherhood to celebrate masses for the soul of the donor. 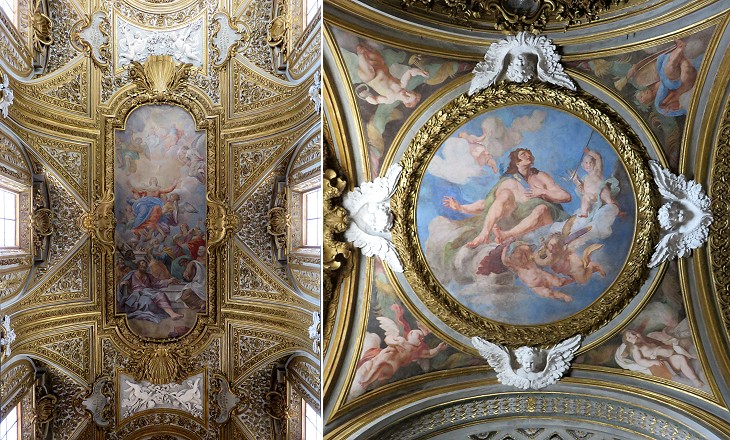 The brotherhood still exists and its members take part to Festa de' Noantri, a religious procession across the streets of Trastevere, and on Holy Thursdays they light the only remaining Macchina delle Quarant'Ore, a spectacular chandelier, in Rome.
You may wish to see a directory of churches belonging to a guild. 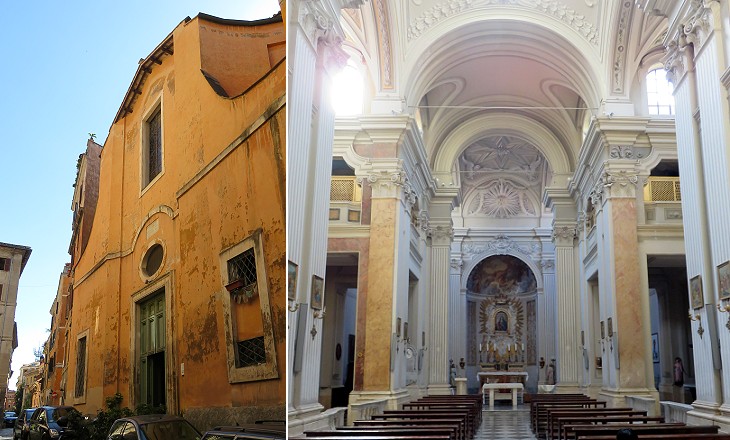 S. Salvatore della Corte (perhaps thus named because it once stood at the centre of a courtyard) is today best known as S. Maria della Luce. It was a very old church which was entirely renovated after 1730; the modest façade hides an interesting interior by Gabriele Valvassori, the architect of Palazzo Doria Pamphilj a Via Larga. The decision to renovate the church and to change its name was linked to a miraculous image; one of the explanations of the reference to luce (light) is that in 1730 a blind man, while standing in front of the painting, regained his sight and cried luce, luce. 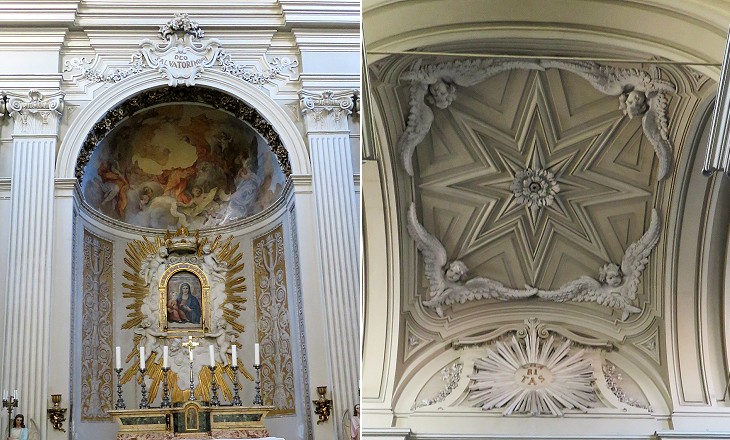 (left) Main altar; (right) ceiling. The use of heads of angels as decorative elements brings to mind works by Francesco Borromini, e.g. the interior of S. Giovanni in Laterano 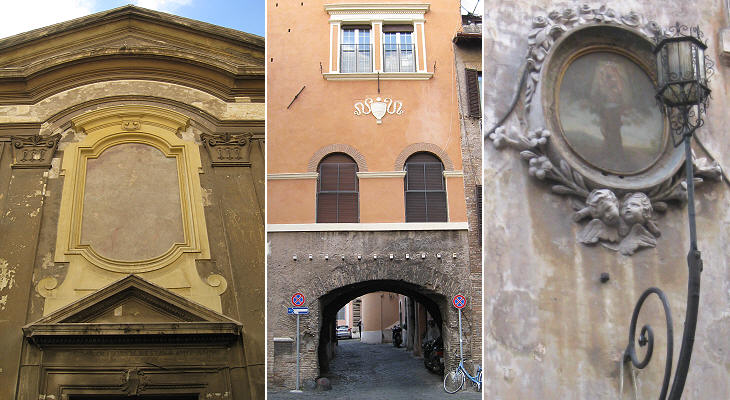 The brotherhood of S. Maria dell'Orto had also a small hospital next to it. The façade of the building was redesigned in 1739 by Gabriele Valvassori, but the fresco above the entrance was so poorly painted that already when Vasi wrote his guide of Rome in 1761 it was almost invisible.
Arco de' Tolomei is a medieval arch named after the nearby Roman house of the Tolomei. The Tolomei family (from Siena, maybe you wish to see their palace) is known for Pia de' Tolomei who implored Dante not to forget her.

At the beginning of the street leading to S. Salvatore della Corte there is a sacred image showing a large tree, most likely an elm which stood in the area and after which two nearby streets were named.