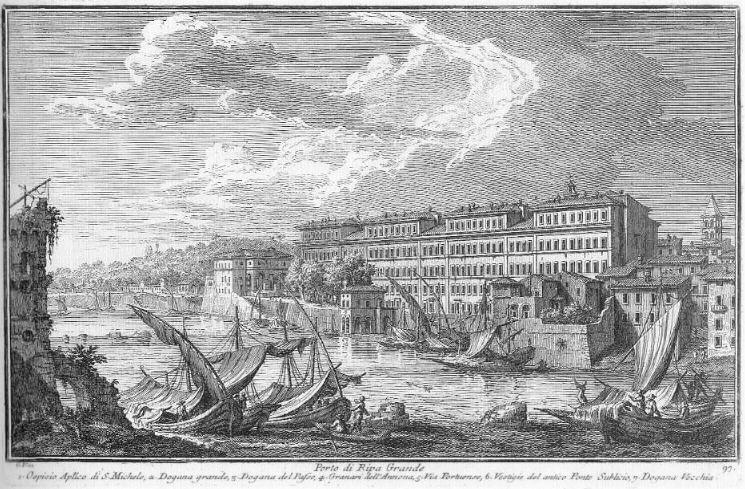 The decision by Romulus to found Rome near the Tiber was to a great extent due to the trade opportunities the river provided: boats of a relatively large size were able to reach the new town from the sea; at the peak of its development the population of Ancient Rome was in the region of 1,000,000; the supply chain was mainly based on goods from the provinces of the empire which reached the harbours of Ostia and Porto at the mouth of the Tiber and eventually the horrea (warehouses) of Rome which were located on the left bank of the river.
In 1754 when Giuseppe Vasi published this etching Rome continued to rely on this trade route, but goods were unloaded on the right bank of the river; the importance of this harbour is testified to by its name Porto di Ripa Grande (great bank) compared to Porto di Ripetta (small bank), the name given to the harbour which received goods from the inland regions of Sabina and Umbria.
Vasi showed Ripa Grande also in plate 98 and in a 1771 large view of the Aventine Hill. The view is taken from the green dot in the small 1748 map here below. In the description below the plate Vasi made reference to: 1) Ospizio di S. Michele; 2) Main custom house; 3) Dogana del Passo, another custom house; 4) Granaries; 5) Via Portuense; 6) Ruins of Ponte Sublicio; 7) Old custom house. 5) and 6) are shown in detail in other pages. The small map shows also 8) S. Maria del Buon Viaggio; 9) Carcere Minorile. 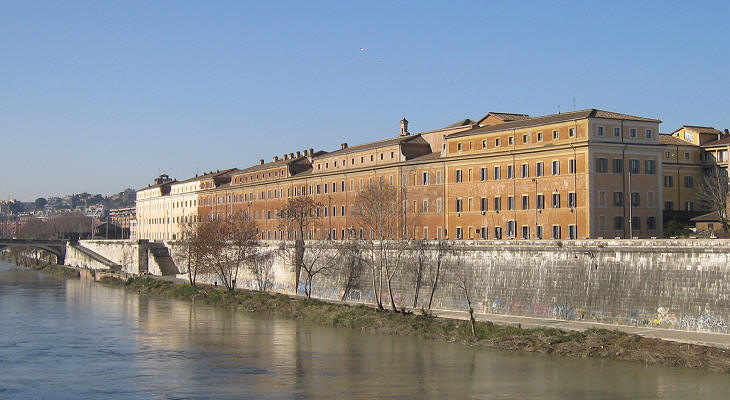 I took the Ripa Grande in my way, and saw there the Boats of Merchandise which come to Rome from Ligorn, Civita Vecchia, Naples, and other places, and disembark their goods here.
Richard Lassels' The Voyage of Italy, or a Compleat Journey through Italy in ca 1668
In the late XIXth century the river lost its importance as a trade route because of the high walls built to prevent floods and of the development of railroads. The custom houses were all demolished to make room for the lungotevere, the new street along the river: in 1914 a modern bridge was named Ponte Sublicio. The ruins of the ancient bridge by the same name were blown up to facilitate the flow of the water. The granaries were pulled down or converted into workshops.
Ospizio di S. Michele was enlarged towards the end of the XVIIIth century with the construction of a fifth block to the right of the existing ones; it hides the view of the bell tower of S. Grisogono which Vasi showed to the far right of the plate. 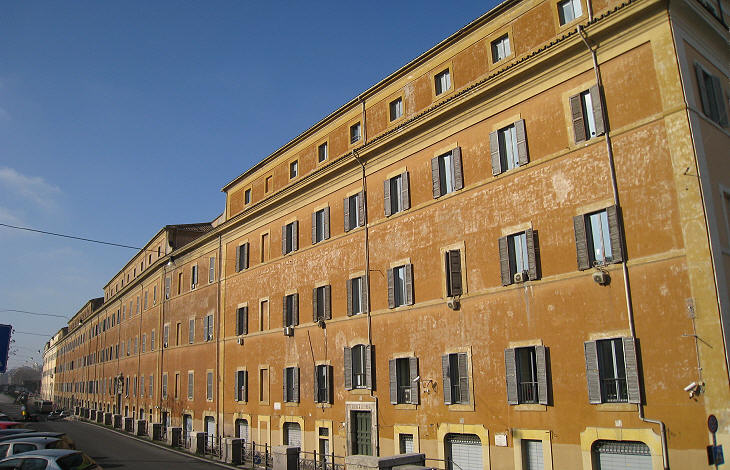 Façade along the river

According to President de Brosses, a French traveller who visited Rome in 1739, beggars amounted to a quarter of the population; maybe his assessment was not based on accurate research, but certainly pauperism, the state of being poor and relying on charitable assistance for living, was a normal condition for a significant part of the population of Rome. The city attracted poor people from the countryside and the many institutions founded by the popes to tackle pauperism in a way caused its growth.
In 1686 Carlo Tommaso Odescalchi, a relative of Pope Innocent XI, felt that a partial solution could be found in teaching a job to the abandoned male children of the poor; he bought a piece of land near Porto di Ripa Grande and by 1689 a building was completed (probably designed by Mattia de' Rossi); it was located in the second from the left of the five identical blocks which make up today's Ospizio di S. Michele. 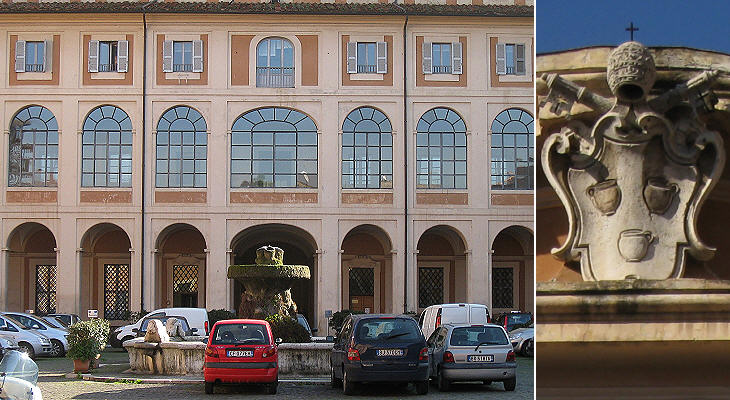 In 1693 Pope Innocent XII bought the charitable institution and commissioned Carlo Fontana to enlarge the existing building; Fontana added another storey to it and built two identical blocks at its sides; a fourth block was completed by 1714. The new complex housed in separate sections also old people and unmarried women. The boys worked in a wool factory, but also a printing press was installed in the premises reserved to them. Fontana built also a large church inside one of the blocks; its bells can be seen from the outside (and are shown in the image used as background for this page). 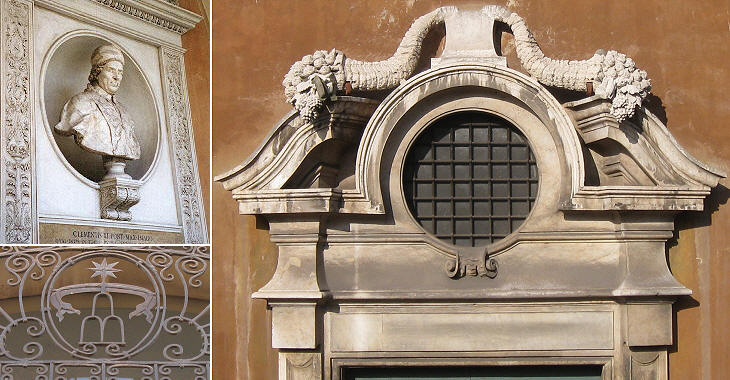 (left-above) Bust of Pope Clement XI; (left-below) heraldic symbols of the Pope; (right) one of the two main entrances

S. Michele is the great poor-house of Rome, unequalled perhaps in any other country in extent, endowment and usefulness. It comprises eight courts, and consists of four grand divisions composed of old men, old women, boys and girls. (..) The children of both sexes are admitted about the age of ten: the young men, having learnt some art, are dismissed about the age of twenty with a complete suit of clothes and a sum of money sufficient to purchase the implements of their trade or profession: the young women are kept until provided for by getting married or entering a convent, and are entitled to a dowry of 100 crowns, or to 200 crowns if they enter religion.
Rev. Jeremiah Donovan - Rome Ancient and Modern - 1843
Ospizio di S. Michele was the largest charitable institution of Rome until the second half of the XIXth century, when it was no longer thought to be a suitable location for an orphanage. It fell into abandonment in particular after WWII, during which it had been occupied by German and Allied troops. A thorough renovation of the internal setup of Ospizio di S. Michele started in 1973 and at its end, a very large section of it was assigned to Istituto Superiore per la Conservazione ed il Restauro, the Italian body in charge of the preservation and restoration of works of art. The wool factory had very large halls for drying the thread; they are used for handling the restoration of large detached frescoes. 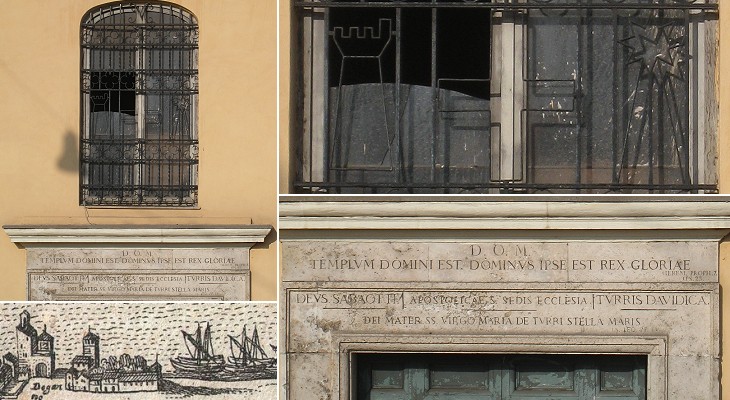 (left-above) Entrance to the church; (left-below) S. Maria della Torre in a 1593 Map of Rome by Antonio Tempesta; (right-above) detail of the window; (right-below) inscription above the entrance

In medieval time a tower of the ancient walls of Rome along the river was turned into the bell tower of S. Maria della Torre, a small church which was used by the seamen who worked at Ripa Grande. It was pulled down by Carlo Fontana when he enlarged Ospizio di S. Michele; a new church for the seamen was built inside the hospice, but with a separate entrance. S. Maria del Buon Viaggio means St. Mary of the Safe Journey; Fontana preferred not to disrupt the design of the new building and for this reason the existence of the church is hardly noticeable; the church has been closed for very many years. 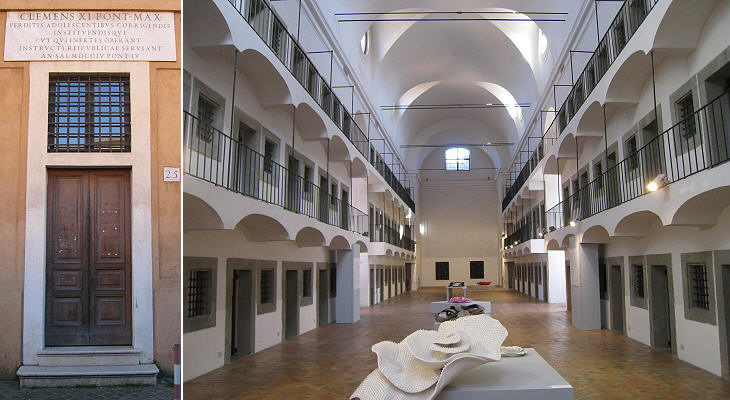 In 1701 Pope Clement XI commissioned Carlo Fontana to build a juvenile prison; the inmates were not necessarily offenders, they could just be boys having shown a rebellious character; the purpose of the institution was to promote their re-education; they worked in the large central hall. The building designed by Fontana is located on the rear of Ospizio di S. Michele and it was seen for a long period as a very advanced example of prison. 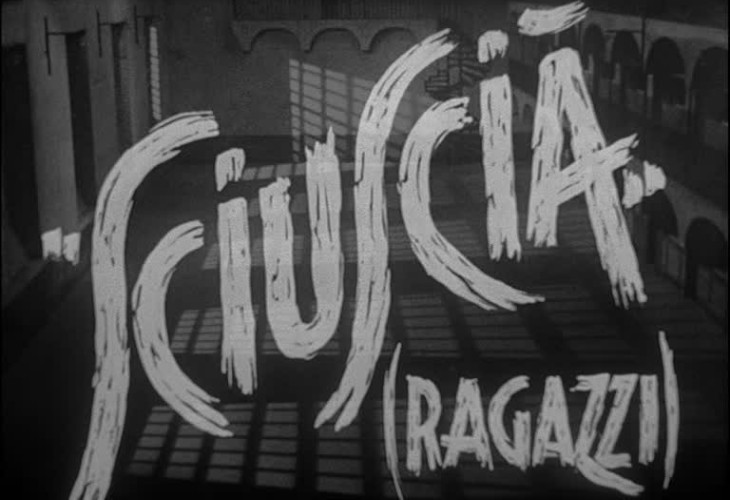 First screenshot of "Shoeshine" a 1946 movie directed by Vittorio De Sica which was shot in the reconstructed juvenile prison of S. Michele. Plot: Two shoeshine boys in post-war Rome, save up to buy a horse, but their involvement as dupes in a burglary lands them in juvenile prison where the experience takes a devastating toll on their friendship

The prison was closed in 1972. Today it is occasionally used for exhibitions. The photo of its interior was taken during a collective exhibition of contemporary artists in January 2010.

Prison for women: (left) façade and in the background S. Anselmo on the Aventine hill; (right) inscription indicating the two categories of women committed to this prison: "mulierum licentiae" (women of ill repute) and "criminibus vindicandis" (law offenders)