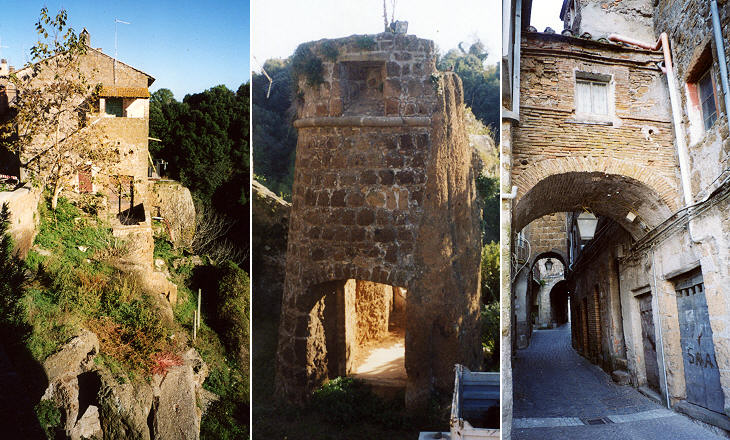 Six miles north of Civita Castellana is Corchiano, a most picturesque village occupying an Etruscan site, and surrounded, like almost all the towns of Etruria, with ravines full of mutilated sepulchres.
Augustus J. C. Hare - Days near Rome - 1875
Similar to many other small towns of the region, Corchiano was built on a rock almost entirely surrounded by a deep ravine. The location is very picturesque, but the rock is subject to erosion and from this respect Corchiano resembles Civita di Bagnoregio; its historical centre was almost entirely abandoned in the 1970s. Actions to control the erosion and revive the old town have been promoted in recent years. 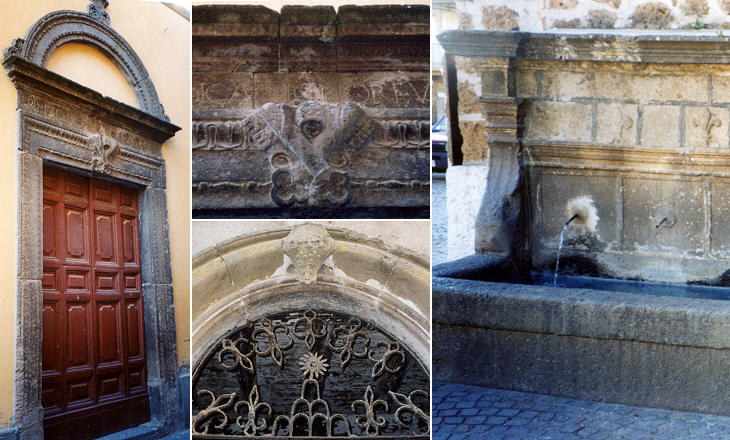 (left) Renaissance portal of the parish church; (centre-above) papal symbols; (centre-below) small palace with the Farnese coat of arms and their heraldic symbols to which those of the Chigi (six mountains and a star) were added; (right) detail of the fountain built by the Farnese

Corchiano was a minor fiefdom of the Prefetti di Vico and of the Orsini, two families who controlled most of northern Latium in the XIII/XIVth centuries. In 1534 it was acquired by the Farnese, the family of Pope Paul III. The Farnese possessed several important fiefdoms in the region (e.g. Nepi, Ronciglione and the Duchy of Castro), where they built palaces and churches. At Corchiano they built a church, a small castle, the fountain and some houses. The town slid into obscurity after the Farnese were forced out in 1649. 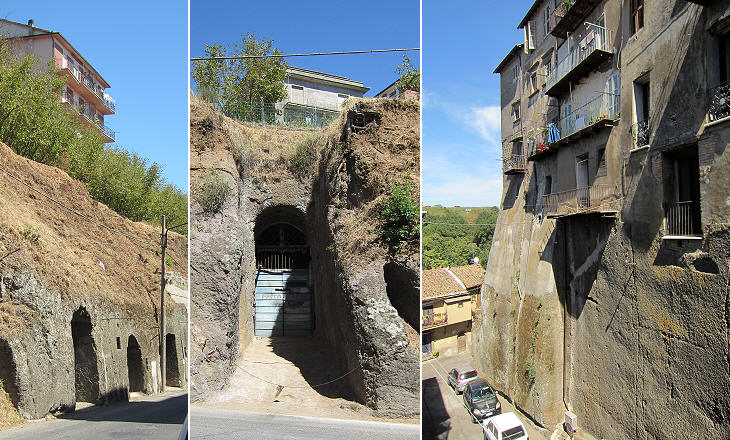 (left/centre) Stables and warehouses cut into the rock; (right) the cut made to the west of the town to protect it

The volcanic rock of the region surrounding Mount Cimino could be cut without causing its collapse. The Etruscans used to cut family tombs into the rock. During the Middle Ages the tombs were utilized to shelter animals and in some instances human beings. Today they house cellars and cars. The ridge on top of which medieval Vignanello stood was deeply cut to defend the town at its eastern and western ends. 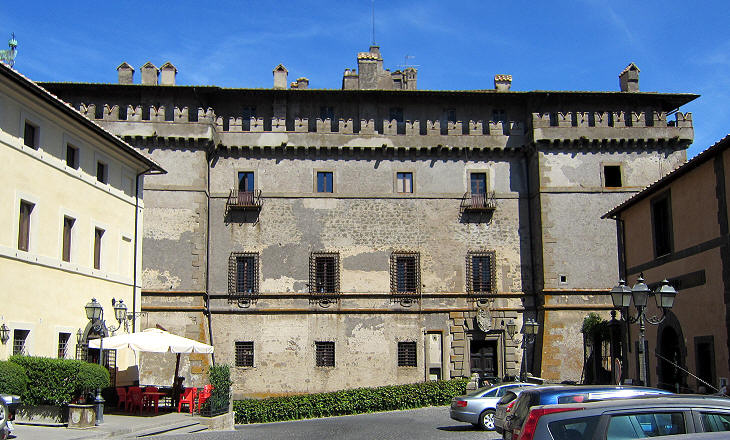 The eastern end of Vignanello was protected by a castle which was redesigned in 1575. It retained some characteristics of a fortification such as four towers, but it acquired features of an urban palace such as many windows.
At the time the castle was redesigned the town was a small countship belonging to Ortensia Farnese. Her mother Beatrice had received the fiefdom of Vignanello in 1531 from Pope Clement VII and a few years later the title of countess from Pope Paul III. 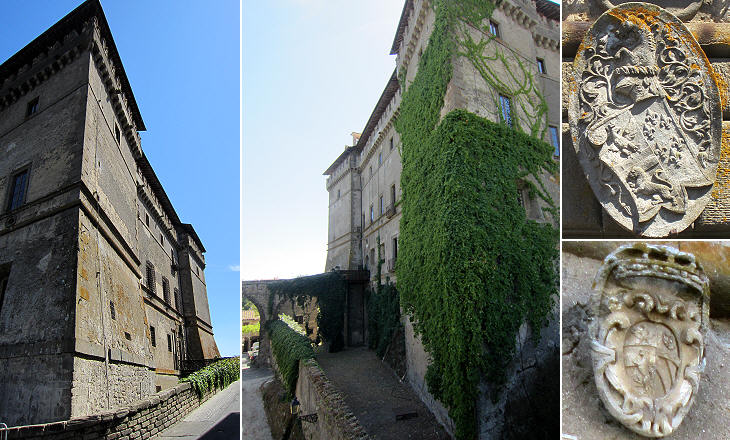 Ortensia married Sforza Marescotti, a military commander who fought for Pope Paul III and Emperor Charles V and the fiedom was inherited by their son Alfonso Marescotti. This explains why the portal was decorated with the united coats of arms of the two families. Almost all the successors of the first counts placed double coats of arms, making Vignanello an open air repertory of Roman aristocracy.
Marcantonio, son of Alfonso Marescotti, married Ottavia Orsini, daughter of Vicino Orsini who had built an unusual garden at Bomarzo. Ottavia and her son Sforza Vicino promoted the construction of a large garden which was accessed via a high bridge across the cut made to protect the castle. An inscription celebrating the completion of the garden refers to the town as Iulianello which over time became Vignanello, probably because of the surrounding vineyards (It. vigna). 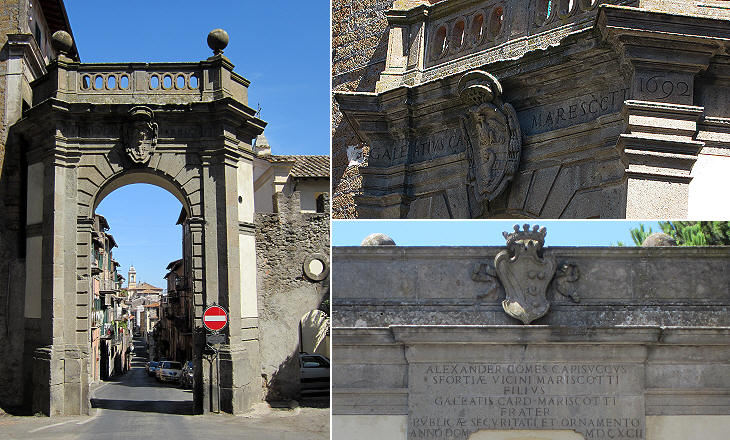 During the XVIIth century the Counts of Vignanello promoted the development of the town beyond the two cuts made in the ridge. The expansion of the town was made possible by the inheritance of properties of other noble families. Sforza Vicino married Vittoria Ruspoli, the last of her family, and agreed that his grandson (who would have inherited Vignanello) would change his surname to Ruspoli. In 1678 his son Alessandro inherited from his cousin Francesco Capizucchi on condition that he would change his surname to Capizucchi. The gate which was built in 1692 to mark the new western limit of the town bears the coat of arms of Cardinal Galeazzo Marescotti, the last count of Vignanello with that surname. Since the Cardinal did not have time to devote to the upkeep of Vignanello the gate was built following instructions from Alessandro Capizucchi. 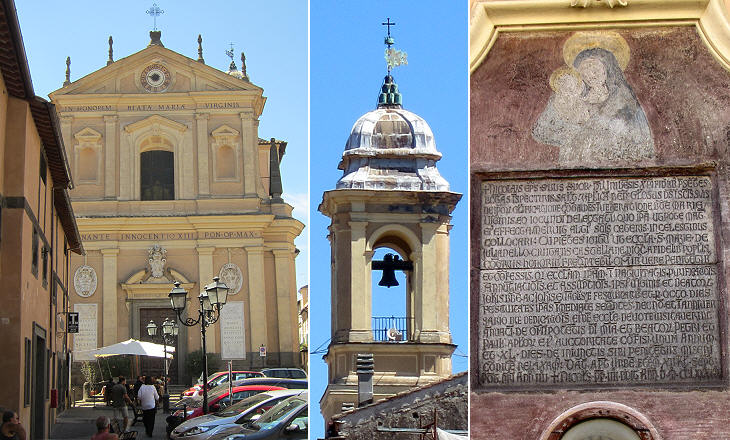 Collegiata: (left) façade; (centre) bell tower with the Ruspoli heraldic symbols; (right) papal bull issued by Pope Nicholas IV in 1292 on the side of the building; (image used as background of this page) coat of arms of Francesco Maria Ruspoli and his wife Isabella Cesi on the door

In 1723 Count Francesco Maria (Marescotti) Ruspoli promoted the construction of a large church opposite the castle which was designed by Giovanni Battista Contini, a leading architect of the time and which replaced an older one.
He adopted the coat of arms of the Ruspoli, which was particularly fit for Vignanello, as it showed a grape cluster. He acquired the title of prince, but not with reference to Vignanello, but to Cerveteri, another fiefdom of the family. He was a protector of arts and he was very fond of music. George Frideric Handel dedicated some of his works to him and his Salve Regina (HWV 241) was first performed at Vignanello. 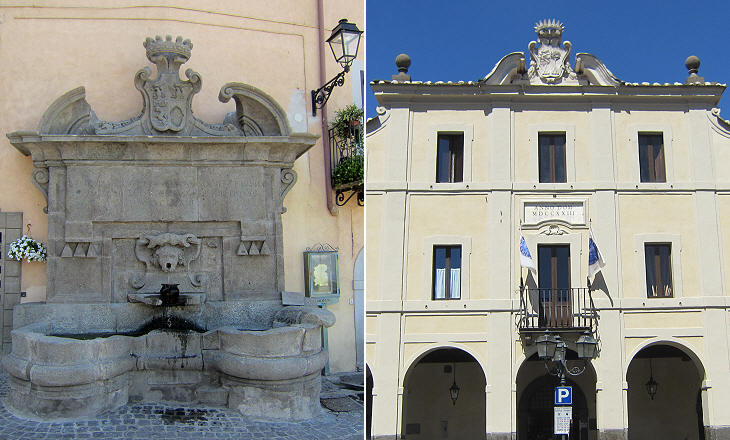 The Ruspoli bought one of the largest Roman palaces along Via del Corso. Marriages with some of the oldest Roman families improved their status in the papal aristocracy. In 1816 they gave up their feudal rights on Vignanello in the frame of reforms implemented by Pope Pius VII, but they retained their possessions there. Castello Ruspoli still belongs to two Ruspoli princesses who open it on Sundays and house weddings, conferences and special events. 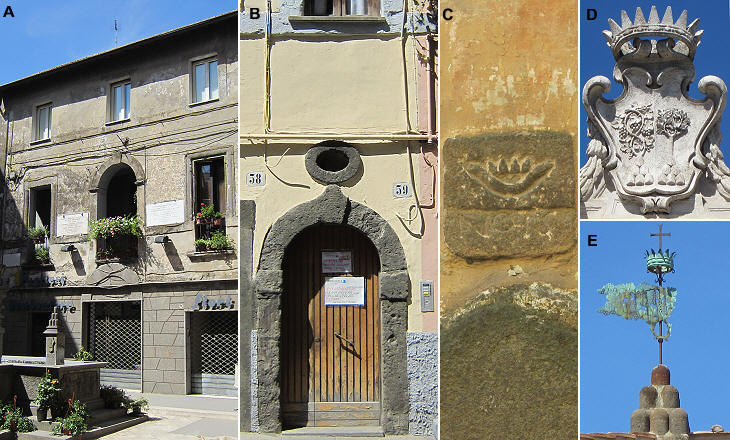 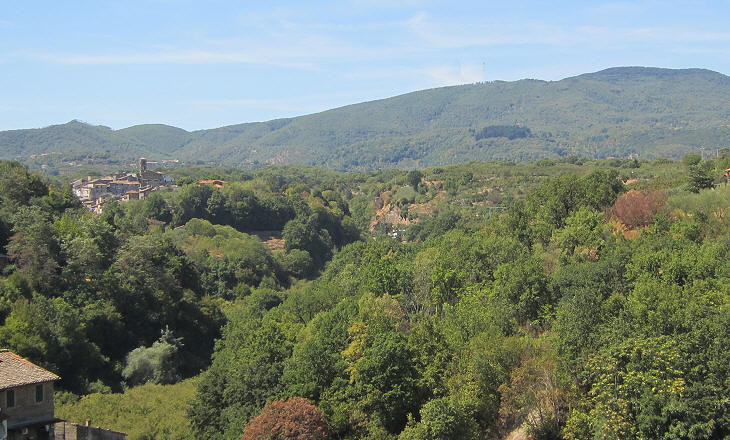 Vallerano is situated less than two miles west of Vignanello and on a similar ridge. A closer view of the town can be seen in the icon of this section. The first records mentioning Vallerano are dated XIIth century. Similar to Corchiano it became a fiefdom of the Farnese in the XVIth century. 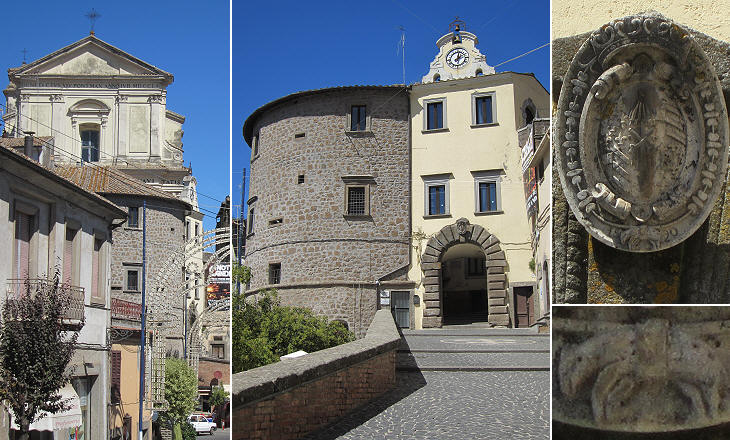 (left) S. Andrea (completed in 1751); (centre) main gate and the tower which protected it; (right) coat of arms of Ranuccio Farnese, Duke of Parma, Piacenza and Castro, Knight of the Golden Fleece

The monuments of Vallerano are not limited to the period of the Farnese rule which lasted until 1649, but the main ones were commissioned by them. The large round tower of medieval origin which protected Vallerano (and which today houses the Town Hall), was redesigned during the Farnese rule. Because of their support to the Imperial/Spanish cause Dukes Ottavio, Alessandro and Ranuccio Farnese were all made Knights of the Order of the Golden Fleece, the highest chivalry order of the Empire.
In recognition of the Farnese contribution to the development of the town the modern coat of arms of Vallerano is a fleur-de-lys. 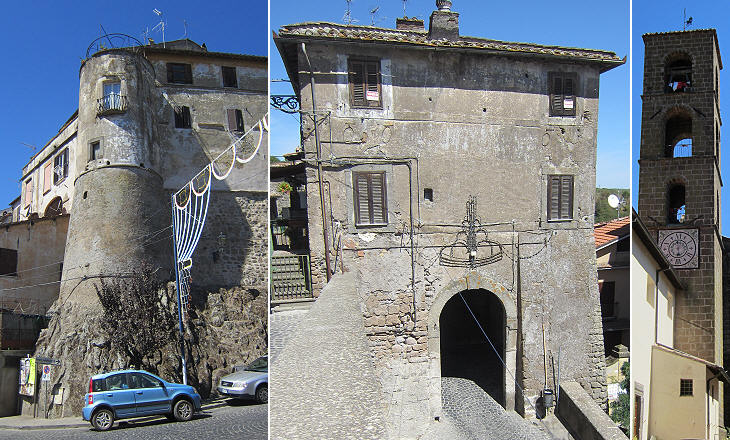 Modern Vallerano developed along the road leading to Vignanello and today one would not notice a separation between the two towns if not for Porta del Molesino. Old Vallerano consists of three short parallel streets and continues to be accessed via its two historical gates. 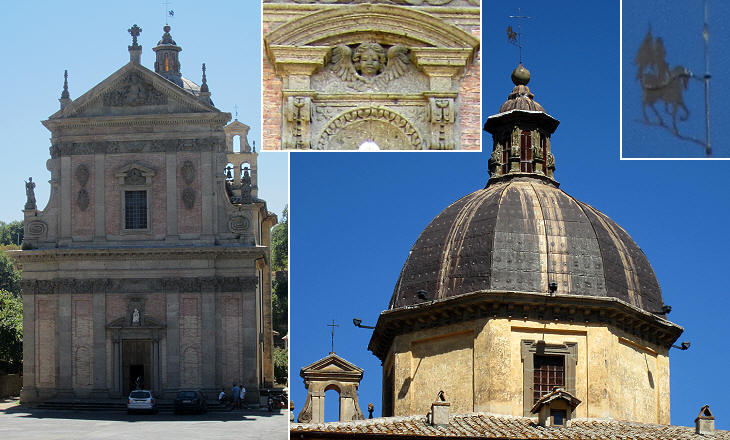 Madonna del Ruscello: (left) façade; (right) dome; (insets) a detail of the façade and the weathervane portraying St. Victor of Syria, the patron saint of Vallerano

Very often large XVIIth or XVIIIth century churches built in provincial towns of Latium do not have an appropriately decorated interior. This is not the case at Madonna del Ruscello because the Farnese ensured the church had altars and chapels up to the standard of the richest churches of Rome. 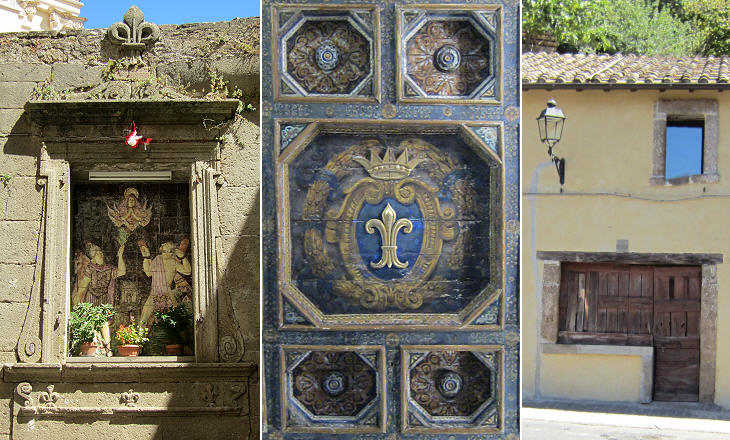 (left) A modern sacred image in a Farnese frame; (centre) XVIth century ceiling of S. Vittore; the fleur-de-lys, symbol of Vallerano was placed in 1864; (right) one of a series of XVIIth century shops near Madonna del Ruscello