Porta S. Pancrazio
(Vasi at work in the Grand View of Rome)

Links to this page can be found in Book 1, Map D3, Day 6 and Rione Trastevere. 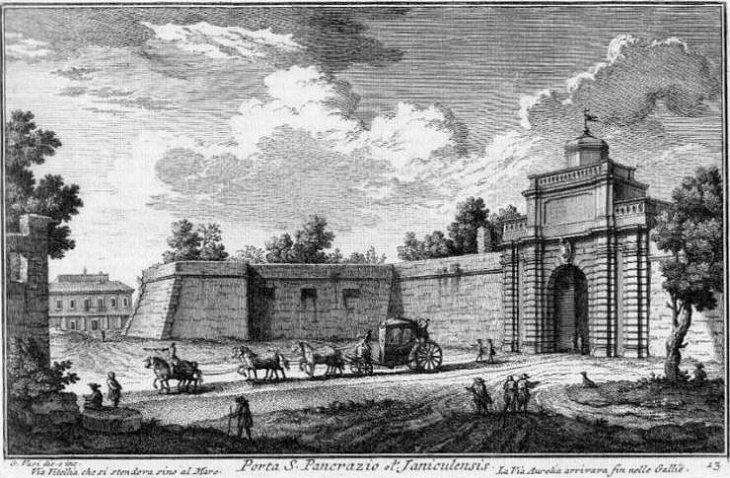 When Rome was founded on the Palatine the opposite bank of the River Tiber was controlled by the Etruscans; it was only during the early Republican period that the Romans were able to expand their city to Trastevere (Lat. Transtiberim, across the Tiber). They fortified it with walls which started along the river and reached the top of the Janiculum, a long hill behind the new regio, the name they gave to the quarters of the city. The western gate of the walls became known as Porta Aurelia, because it was the starting point of Via Aurelia, the road linking Rome with the coast of the northern Tyrrhenian Sea and eventually with France. In 1644 during the pontificate of Pope Urban VIII, Porta Aurelia was replaced by Porta S. Pancrazio, a new gate named after nearby Basilica di S. Pancrazio.
The 1747 etching by Giuseppe Vasi shows that the gate had just been opened to let a luxury coach out. Maybe it belonged to the Corsini or the Pamphilj who had their villas in the vicinity of the gate. At Vasi's time travellers to Rome by Via Aurelia branched off the road near Villa Carpegna and entered the city at Porta Cavalleggeri.
The view is taken from the green dot in the small 1748 map here below which shows: 1) Porta S. Pancrazio; 2) Casino Riario which was demolished to make room for Monumento a Giuseppe Garibaldi; 3) Villa Spada. 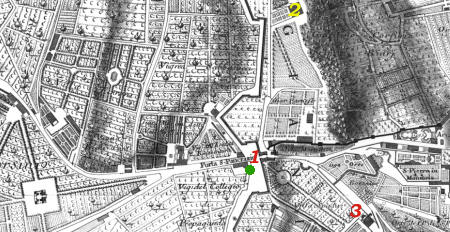 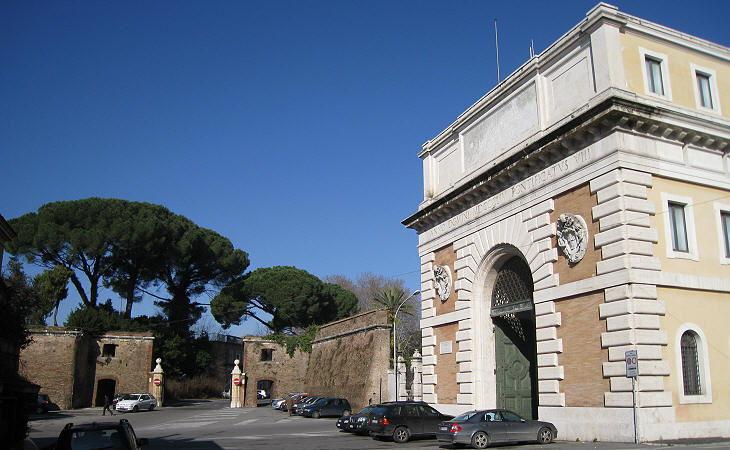 Porta S. Pancrazio was designed by Marcantonio De' Rossi, the military architect in charge of the construction of new walls around Trastevere and it was protected by two massive bastions. The gate and the new walls were built by Pope Urban VIII in just two years, because he feared an imminent attack on the city by the Farnese and their allies; as a matter of fact this threat did not materialize. When eventually in 1849 a foreign army attempted to enter Rome through this gate, it was not that of an enemy of the pope, but the French troops sent by President Louis-Napoléon Bonaparte to restore Pope Pius IX to the throne of the Papal State.
The French were unable to take Porta S. Pancrazio and they eventually managed to enter Rome through a breach in the walls; the gate however was almost totally destroyed and what we see today is an 1854 new construction. The new gate was designed by Virginio Vespignani (the architect of the external side of Porta Pia); it lacks the elegance of the previous building; only the coats of arms of the popes (Pius IX and Urban VIII) follow XVIIth century patterns, in particular a coat of arms of Pope Innocent X by Gian Lorenzo Bernini. 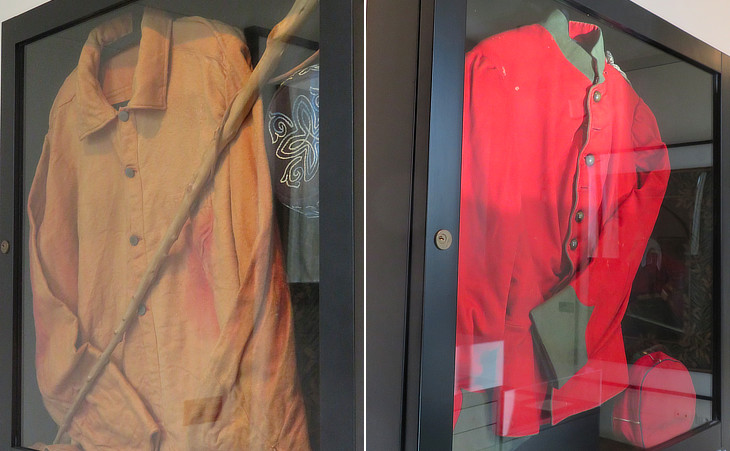 In 2011 a small museum dedicated to Garibaldi and the Roman Republic was inaugurated inside the premises of the gate. 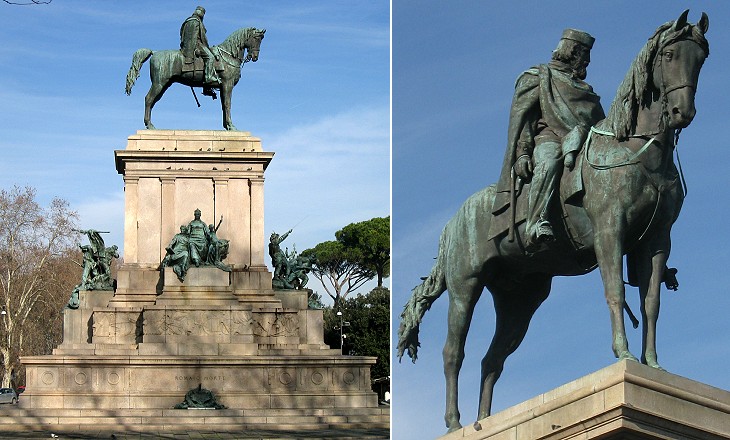 Giuseppe Garibaldi is the most popular Italian national hero; he won the admiration of Italian and international public opinion by his 1860 conquest of Sicily and Southern Italy at the head of a thousand volunteers (known as red shirts) and also because he refused to be involved in petty politics afterwards. There is not a major Italian town without a monument to him; in Rome the area near Porta S. Pancrazio was thought to be the most appropriate location for a monument because Garibaldi fought there during the 1849 defence of Rome. In 1932 a monument to Anita, Garibaldi's first wife, was erected in an adjoining square. 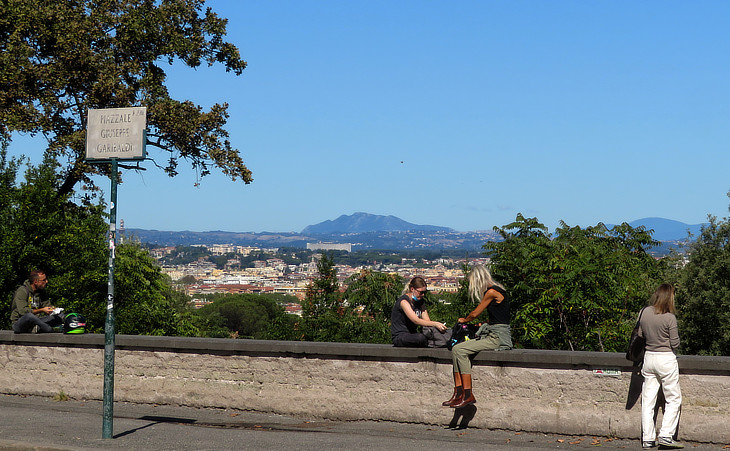 The monument was built at the centre of a large terrace which commands an excellent view over Rome; it corresponds to the point from which Giuseppe Vasi designed his Grand View of Rome. 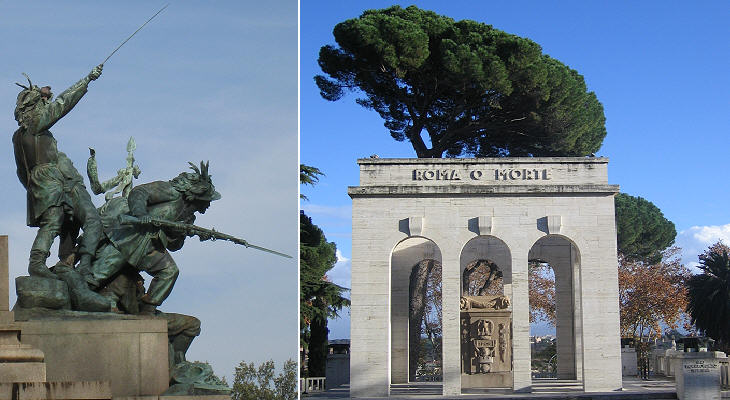 (left) The attack of the "Bersaglieri" (light infantry) led by Luciano Manara at Villa Corsini in 1849; (right) 1941 Ossuary of the fallen during the defence of Rome near S. Pietro in Montorio; a monument to the French can be seen at Villa Pamphilj

The whole Janiculum (which is not one of the historical seven hills of Rome) retains memories of the fierce fights which preceded the entrance of the French troops. Busts of officers and soldiers who fought with Garibaldi were placed along the avenues leading to the monument (the bust shown in the image used as background for this page portrays Luciano Manara). 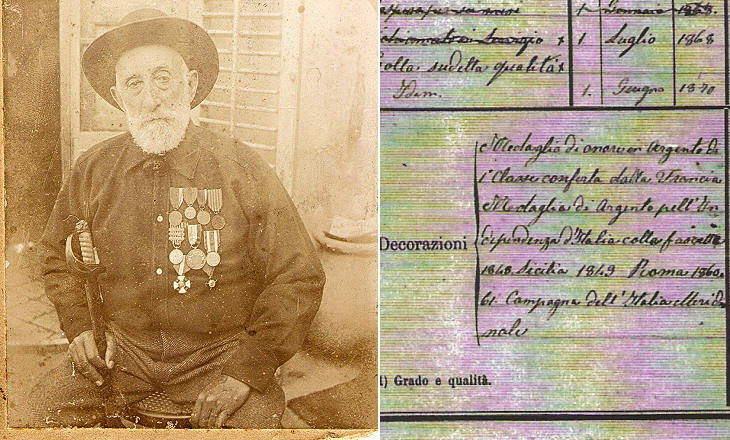 You may wish to learn more about these events by reading excerpts from George Macaulay Trevelyan's "Garibaldi's Defence of the Roman Republic". 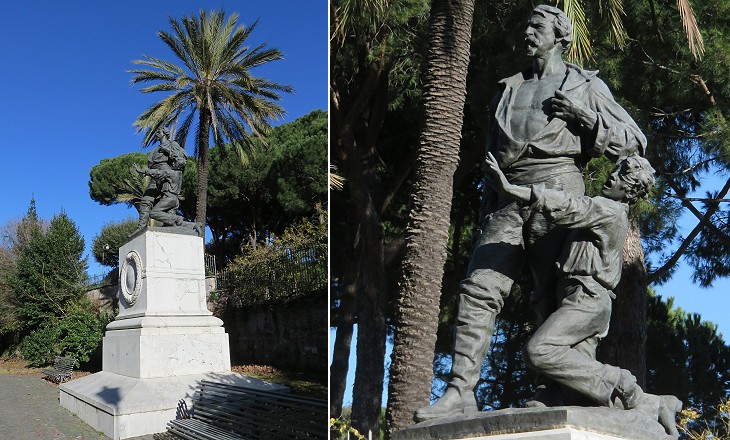 Monument to Ciceruacchio (Angelo Brunetti) by Ettore Ximenes (1907); it was relocated here in 2011; it originally stood near Ponte Margherita, not far from Via di Ripetta where Ciceruacchio lived and is remembered by a bust. You may wish to see the house Ximenes designed for himself and the so called Casa di Michelangelo opposite this monument

The leader, one might say the creator, of the Roman democratic party was the good-natured and voluble dealer in horses and wine, Angelo Brunetti, better known by his pet name, Ciceruacchio, given him in his infancy by his mother and her gossips to denote his plumpness, for which throughout life he remained famous. (..) Ciceruacchio and his two sons, with half a dozen other Italians, made northwards for Venice, and with immense difficulty succeeded in crossing several of the mouths of the Po, and entering Austrian territory; but there, about the middle of August, they were betrayed by a fellow countryman covetous of the blood-money, condemned by a drum-head court-martial, and shot in the market square of San Nicolo in the district of Ariano, close to the central mouth of the great river. (..) His younger son, somewhere between ten and fifteen years of age, stood at his father's side to face the levelled muskets, with the innocence and courage of boyhood.
G. M. Trevelyan - Garibaldi's Defence of the Roman Republic - 1910 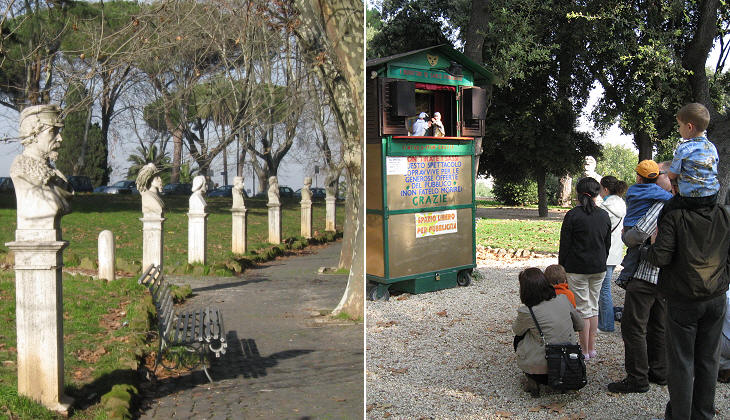 You can see some more stone pines of the Janiculum in The Pines of Rome. 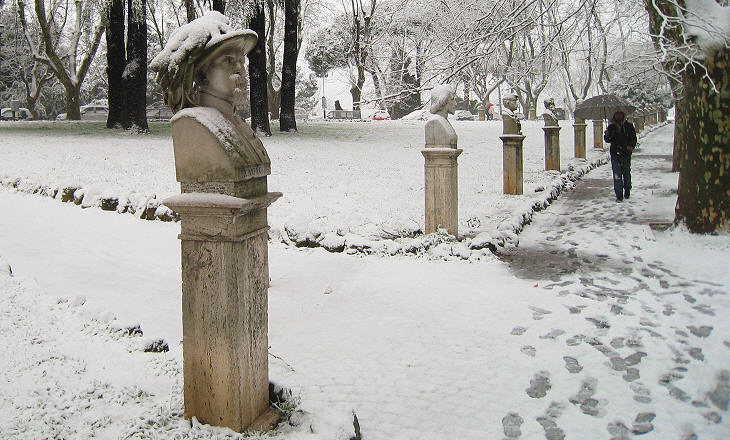 Snow is a very rare event in Rome; on the Janiculum there is a slightly higher chance that the snow settles. You may wish to see more images of snowfalls in Rome. 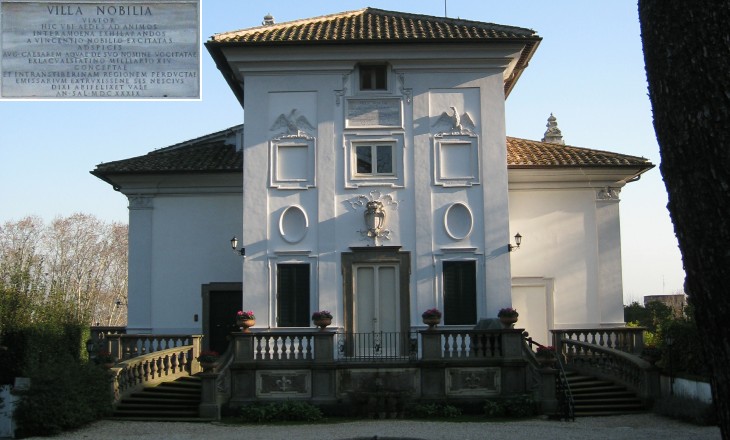 The casino of Villa Spada is located near the fountain of Acqua Paola; when French troops made their way inside the city through a breach in the walls, it was the site of the last resistance by the Bersaglieri of Luciano Manara who was mortally wounded there.
The casino was rebuilt according to the original design; it is named after the Spada who bought it sometime before 1748. It retains an interesting inscription dictated by the Nobili, its first owners; it is written in the style of those on the ancient Roman tombs: Passer-by be aware that here where you see the house built by Vincenzo Nobili for the leisure of souls amidst natural beauties, Caesar Augustus built the aqueduct which bears his name and which comes from Lake Alsietinus, fourteen miles north of Rome and which ends in Trastevere. That's all. Be happy and goodbye. The reference is to some arches (now lost) of an ancient aqueduct which supplied water to a naumachia (site for the re-enactment of naval battles) in Trastevere.
I produced a naval battle as a show for the people at the place across the Tiber now occupied by the grove of the Caesars, where a site 1,800 feet long and 1,200 broad was excavated. There thirty beaked triremes or biremes and still more smaller vessels were joined in battle. About 3,000 men, besides the rowers, fought in these fleets.
Res Gestae Divi Augusti - translation by P. A. Brunt and J. M. Moore

The Walls between Porta S. Pancrazio and Porta Cavalleggeri 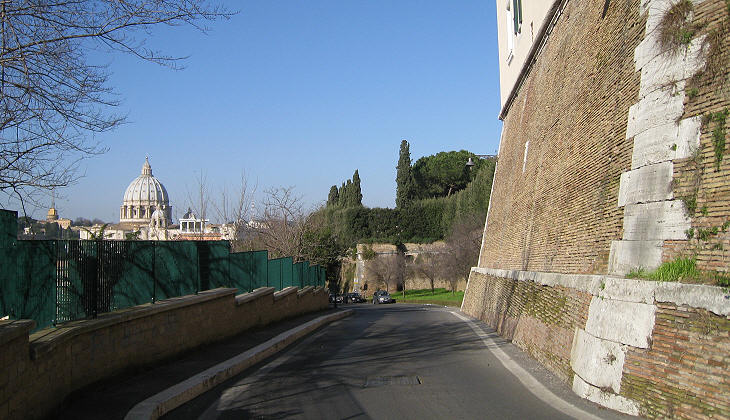 View of the walls in the proximity of Porta S. Pancrazio; in the background: S. Pietro

The walk along the walls towards Porta Cavalleggeri offers fine views over the Vatican. 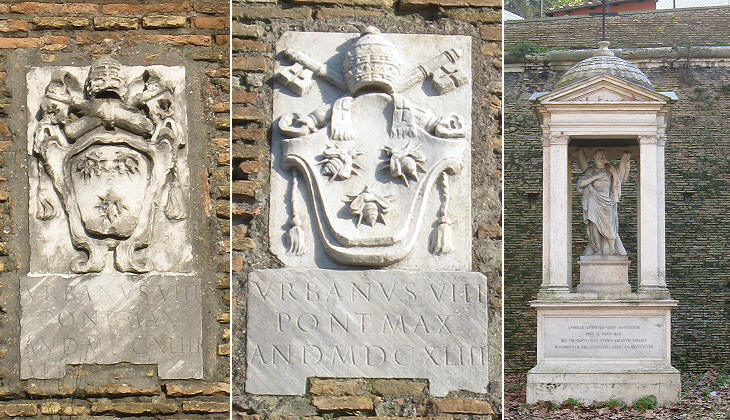 (left/centre) Coats of arms of Pope Urban VIII; (right) monument by Gaetano Morichini with a statue by Carlo Aureli celebrating the recovery of St. Andrew's head

This section of the walls retains at least ten small coats of arms of Pope Urban VIII and probably there were more of them when the walls were built. They are all different from one another and they constitute a sort of catalogue of the different patterns which were used at the time.
In March 1848, there was great consternation throughout Rome at the discovery that one of the treasures of St. Peter's Church, the head of St. Andrew, had been stolen, and evidently by some one familiar with the internal arrangements of the church. Such an event, in an ecclesiastical capital in which there was so little of business or politics to talk about, created as much sensation as the overthrow of the Bunker Hill Monument by an earthquake would, in Boston. Besides the horror which so sacrilegious an act awakened in every good Catholic, the theft involved a considerable pecuniary loss, for the head was enclosed in a silver case, set with jewels, valued at about twenty thousand dollars. A liberal reward was offered for the restoration of the relic, which was found on the last day of March, buried in a vinevard outside of the walls.
George Stillman Hillard - Six Months in Italy in ca 1847-1848
A small monument celebrates a very obscure event; in 1848 one of the most cherished relics kept in S. Pietro, a fragment of the head of St. Andrew, was stolen; it was found a few days later outside the walls near Porta S. Pancrazio. Pope Pius IX built a monument to celebrate the event which is almost identical to that built by Pope Pius II near Ponte Milvio in 1462.

In many parts of Rome the historical walls are surrounded by modern blocks of flats; luckily town planners have forbidden building on the former farms located outside this section of the walls; the rule has known some exceptions, but overall it has been complied with. 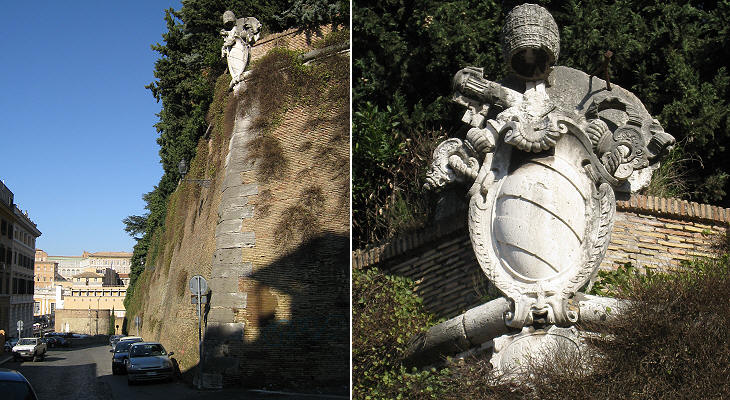 The last section of the walls has a large coat of arms of Pope Pius V who completed the walls around the Vatican.