You may wish to see a page on Civitavecchia and some nearby towns first.
The hotel manager said there was a very interesting museum in Civita Vecchia and wouldn't we stay the next day and see it. "Ah" I replied "But all it contains is Roman stuff, and we don't want to look at that."
David Herbert Lawrence - Etruscan Places - Published in 1932, but based on a visit made in April 1927.
Lawrence left the town to visit Tarquinia, but the small museum of Civitavecchia was not only devoted to housing objects of the Roman period. It was hit by bombings during WWII and some of its exhibits were lost or damaged. It is now a national archaeological museum inside one of the few remaining historical buildings of the town. 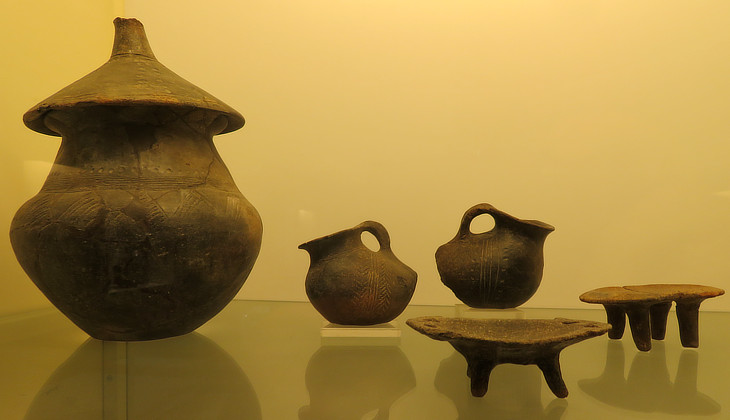 Little clusters of hut foundations going back to the Bronze Age have been found scattered over the territory of Civitavecchia. The metal in the Tolfa mountains must have been a prime reason for this early habitation, as well as the superior fishing off the rocky coast; a string of hot springs paralleling the coast a few kilometers inland may also have been an attraction. Proto-Villanovan (a late Bronze Age culture) sites are present all over the Italian peninsula, mostly in the northern-central part but also, to a lesser degree, in Southern Italy and eastern Sicily. Among the most important of these sites are the Monti della Tolfa and Milazzo/Lipari. Settlements, usually of small dimensions, were generally built on hills and circumscribed with fortifications. The economy was mostly based on agro-pastoral activities, metallurgy, fishing and trades. The proto-Villanovans practiced cremation. The ashes were placed in urns, often decorated with geometric designs, and then buried in the ground.

The necropolis of Pisciarelli is located inland, a couple of miles north of Civitavecchia, near hot sulphur springs (Aquae Tauri in Roman times). There is no clear historical evidence establishing whether the inhabitants of the site were in the territory of Tarquinia or in that of Caere (Cerveteri), however some of the objects found in the tombs are more similar to those found at Tarquinia, than at Cerveteri.

Jewels from the necropolis of Pisciarelli (IVth century BC): heavy earrings in the shape of grape clusters and a ring with an Etruscan inscription: Palartas i.e. of Palarta

The Etruscan jewels which were found at Tarquinia and Cerveteri indicate an early development of refined techniques. The earrings which were found at Pisciarelli would cover the whole ear and indicate a tendency towards display of quantity rather quality. They are known as grape cluster earrings because of the decoration of their lower part. 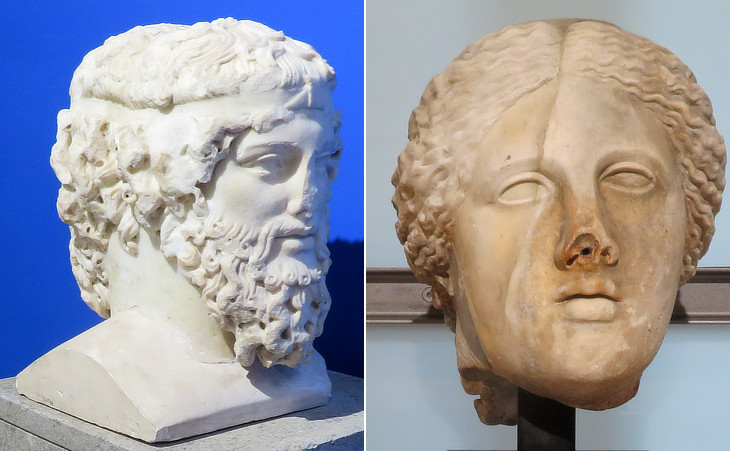 (left) Bust of Janus from a Roman villa near Palo (first half of the IInd century AD); (right) head of Venus from Civitavecchia (Ist-IInd century AD)

I was greatly delighted when our Emperor sent for me to Centum Cellae - for that is the name of the place - to act as a member of his Council. (..) Every day we were summoned to dine with the Emperor, and modest dinners they were for one of his imperial position. Sometimes we listened to entertainers, sometimes we had delightful conversations lasting far into the night. On the last day, just as we were setting out, Caesar sent us parting presents, such is his thoughtfulness and courtesy. As for myself, I delighted in the importance of the cases heard, in the honour of being summoned to the Council, and in the charm and simplicity of his mode of life, while I was equally pleased with the place itself. The villa, which is exquisitely beautiful, is surrounded by meadows of the richest green; it abuts on the sea-shore, in the bight of which a harbour is being hastily formed.
Pliny the Younger - Epist. 6.31 - Translated by J. B. Firth (1900)
Emperor Trajan is renowned for both his military conquests and the promotion of a large number of public works, including the enlargement of the artificial harbour of Porto. Pliny is the first author to mention Centum Cellae (today's Civitavecchia); for a time he sojourned at a nearby villa, one of many which were built along the coast and, thanks to Via Aurelia, were within easy reach from Rome.

Gravestones of sailors of the imperial fleet: (left) of the trireme "Castor"; (right) of Bessian (Thracian) origin

This harbour will be called - and indeed it already is called - after the name of its constructor, and it will prove a haven of the greatest value, inasmuch as there is a long stretch of shore which has no harbour, and the sailors will use this as a place of refuge. Pliny
A detachment of the imperial fleet was based at Centumcellae through the IInd and IIird centuries. The gravestones record the deceased's name, age, years of service, ship, and fleet (Ravenna or Misenensis), and often his birthplace. The Ravenna sailors were largely Dalmatians and Pannonians; the Misenense were Egyptians and Thracians. The ships were mostly triremes, but quadriremes and biremes also appear. 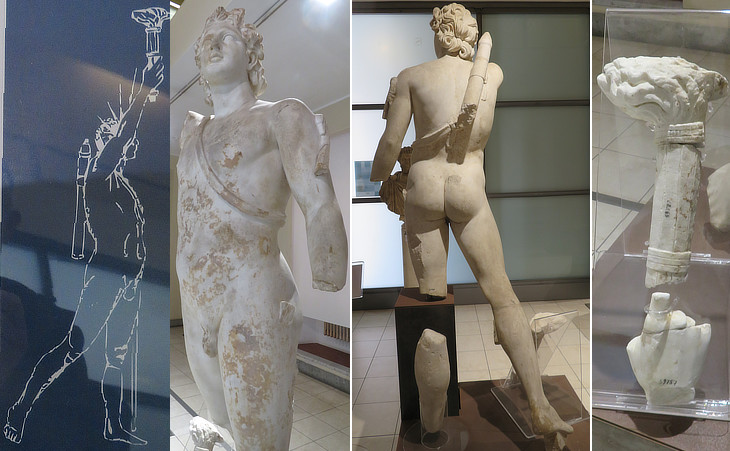 Statue of Apollo which was discovered in the Villa of Ulpian at S. Marinella in 1957 (Ist century AD): (left) assumed original aspect; (centre) front and back of the statue; (right) fragment of a hand and of a torch

The finest exhibits of the museum were discovered in the 1950s at a Roman villa in today's Castello Odescalchi of S. Marinella, south of Civitavecchia. The villa is named after Ulpian, a professor of the law school of Berytus (Beirut), who became an adviser to Emperor Septimius Severus and lived at the villa in the early IIIrd century. An unusual statue of Apollo as Helios, god of the Sun, is thought to be a smaller copy of the Colossus of Rhodes, which was erected at the entrance to the harbour of the town in 280 BC and collapsed because of an earthquake in 226 BC. A medieval tradition imagined that the statue had one foot on either side of the harbour and this misconception is still very popular. (left) Athena Parthenos (IInd century AD) from the Villa of Ulpian: the head was discovered in 1895 and it is now at the Louvre; the body was discovered in 1959; it was completed with a cast of the head (and the Louvre did the same with the body); (centre) "gorgoneion", Medusa's head; (right) "apoptygma", overfold

Athena, goddess of wisdom and war, daughter of Zeus, was the protector goddess of Athens. When the Parthenon was completed in the Vth century BC, a large statue of Athena, some 12 meters in height, was erected inside the temple. Made by the sculptor Phidias, ancient descriptions of the cult statue describe a chryselephantine sculpture, a wooden core covered with gold and ivory. The original statue was destroyed at some point, probably looted for its precious gold and ivory inlay. However, the Romans began to make scale copies of the Athena Parthenos. That at Civitavecchia shows the goddess wearing a luxurious peplos, one that uses a lot of fabric, with a large overfold. The sculptor made the copy depart from Classic models by the treatment of the folds and by placing many snakes on the armour and on the waist. It would have pleased the eye of a Bernini (you may wish to compare it with Athena Giustiniani, a more classicizing statue of the goddess).

Fragment of sarcophagus of unknown origin depicting the dead in a clipeus (round shield), victories and hunting scenes (IInd/IIIrd century AD)

I have chosen the sea, since roads by land, if on the level, are flooded by rivers; if on higher ground, are beset with rocks. Since Tuscany and since the Aurelian highway, after suffering the outrages of Goths with fire or sword, can no longer control forest with homestead or river with bridge, it is better to entrust my sails to the wayward sea. (..) To Centumcellae we changed our tack before a strong South wind: our ships find mooring in the calm roadstead. An amphitheatre of water is there enclosed by piers, and an artificial island shelters the narrow entrances; it rears twin towers and extends in both directions so as to leave a double approach with narrow channels. Nor was it enough to construct docks of wide harbourage; to keep the vagrant breeze from rocking the craft even when safe in port, an inner basin has been coaxed into the very midst of the buildings, and so, with its surface at rest, it knows naught of wayward wind, like the water imprisoned in Cumae's baths which buoys up the unhurried arms plied by the swimmer in alternate sweep.
Rutilius Namatianus - A Voyage Home to Gaul - Loeb Edition 1934
Centumcellae owed its continuing prosperity to the excellence of its harbor. When Rutilius Namatianus sailed up the coast in 415 AD, it was the only city still flourishing; and it continued to flourish for four centuries. It was taken by the Saracens in 828 and the inhabitants were expelled, but 60 years later they returned. The city's name was then changed to Civitas Vetula, which became Civitavecchia. 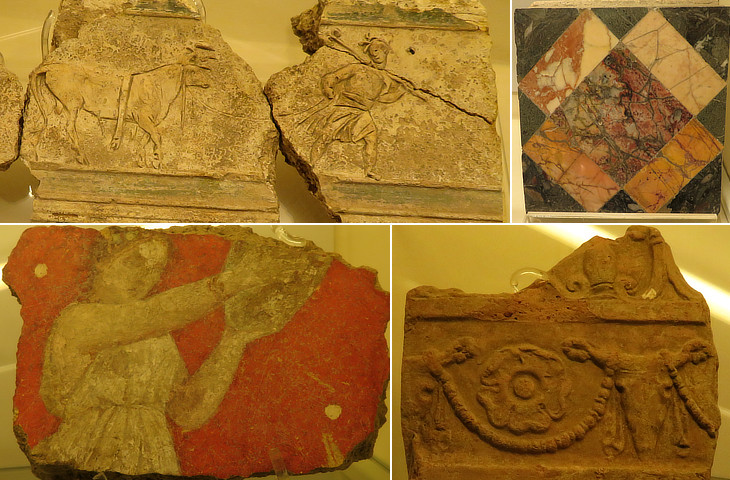 Evidence of the types of decoration of Terme Taurine; the image used as background for this page shows a small statue from them

We pay a pleasant visit to the hot springs named after a bull: the distance of three miles seems no troublesome delay. There the wells are not spoiled by a brackish flavour, nor is the water coloured and hot with fuming sulphur: the pure smell and delicate taste make the bather hesitate for what purpose the waters should better be used. If the legend deserves credit, it was a bull that first revealed these hot baths by tracking out the source, when, tossing aloft the sods, as is a bull's way to prelude a fight, he grazed his downbent horns upon a hard tree-stump. (..) Not Greeks alone must have the glory of marvels which o'ertop belief! The fount of Helicon has for its begetter an animal: let us believe that through like origin these waters were drawn forth, as the steed's hoof dug out the Muses' well. Namatianus
The Terme Taurine or Baths of Trajan, lie ca. 3 km NE of Civitavecchia. The imperial buildings, dated by brick-stamps to the time of Hadrian, incorporate facilities of an earlier bath. Walls and floors were covered with marble, and ceilings with stucchi. Adjacent to the baths were a library and a series of small rooms. 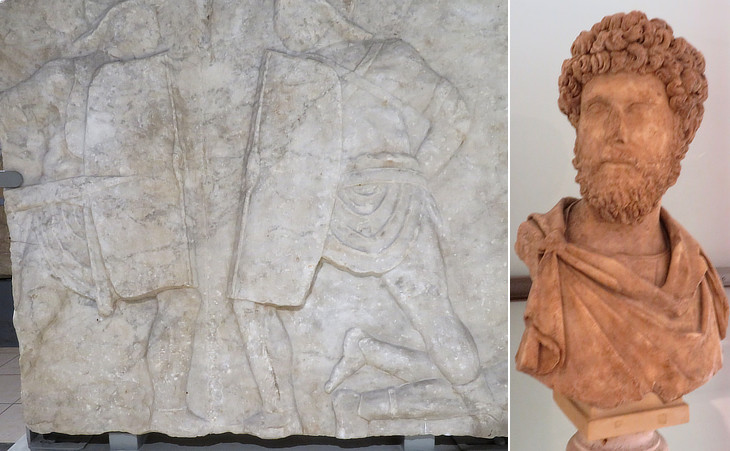 (left) Relief which decorated a funerary monument (it is very similar to those found near Lucus Feroniae); (right) bust of Lucius Aelius, father of Lucius Verus