As soon as one crosses the bridge (Ponte Felice) one is on volcanic terrain, either lava or an earlier metamorphic rock. (..) The high road to Civita Castellana is built of it and worn wonderfully smooth by the carriages. This town is built upon a volcanic tufa in which I thought I could recognize ashes, pumice stone and lava fragments. The view from the castle is magnificent. Soracte stands out by itself in picturesque solitude. (..) The volcanic areas lie much lower, and it is only the water tearing across them which has carved them into extremely picturesque shapes, overhanging cliffs and other accidental features.
(J. W. Goethe - Italian Journey - October 28, 1786 - Translation by W. H. Auden and E. Mayer) 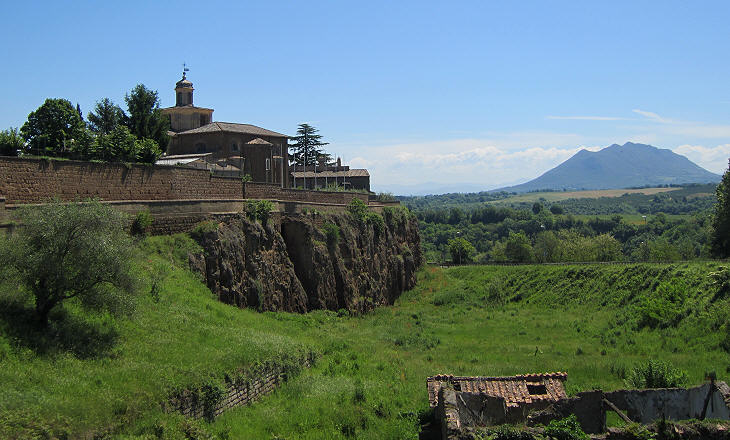 View of Rio Vicano, the ravine to the south of the town and near the Cathedral and Monte Soratte in the background

Similar to Bagnoregio, Civita Castellana lies on the edge of a plateau of volcanic origin. Two ravines provided the town with a natural defence and a commanding position, thus making it an important centre for the Italic tribes who lived in the Tiber River valley. 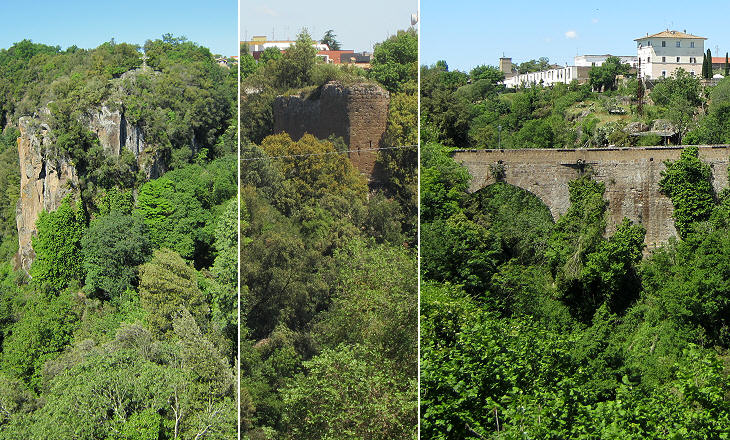 (left) A cliff along Rio Maggiore, the ravine to the north of the town; (centre) tower on the side of Rio Maggiore opposite Civita Castellana; (right) Ponte Terrano, a medieval bridge across Rio Maggiore

Falerium, the ancient name of Civita Castellana, was the main centre of the Falisci, a small Italian tribe which occupied a territory between the Etruscans to the west and the Sabines to the east. In 396 BC the Falisci joined an alliance to check Roman expansion, but after a battle at Nepete (Nepi), where the Falisci were routed, and stripped of their camps (Livy - Book V), they had to accept Roman hegemony over their territories. 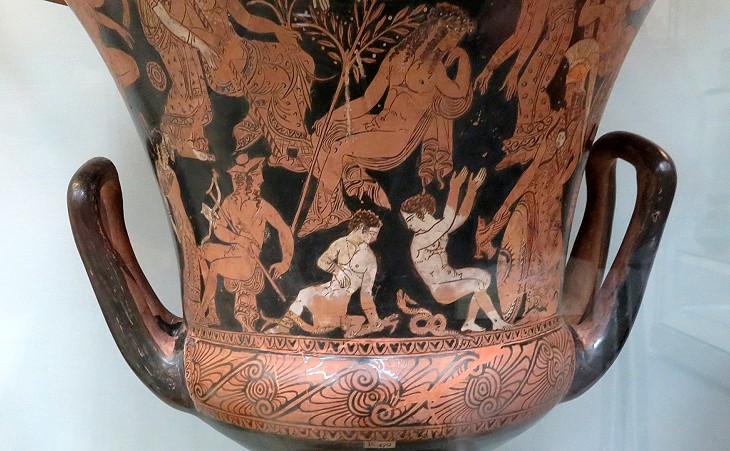 British Museum: detail of a Vth century BC vase from Civita Castellana. It depicts infant Hercules strangling the serpents sent by Juno while Iphicles, his half maternal twin brother cries for help (see the same episode in a fine mosaic in Syria)

During the First Punic War, the Falisci tried to take advantage of Rome's difficulties and broke peace treaties. At the end of the war the Romans razed Falerium to the ground, massacred many inhabitants and deported the survivors to Falerii Novi, a new less defendable location. Archaeologists have found some ancient tombs of the Falisci in Rio Maggiore. You may wish to see some fine terracotta statues which were found near Civita Castellana. 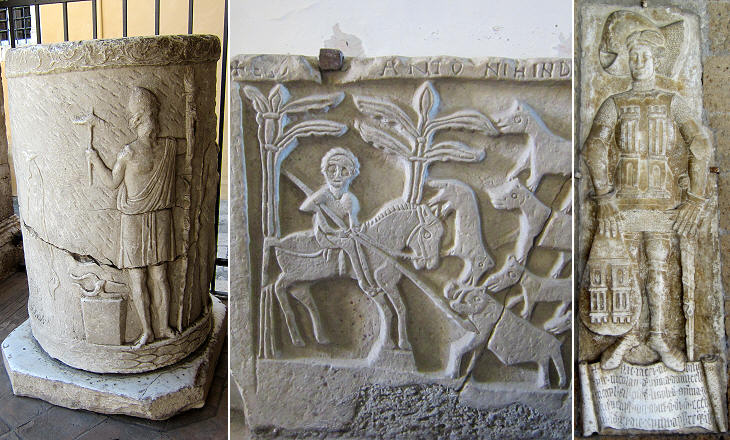 Porch of the Cathedral: (left) Roman altar (Ist century BC); (centre) VIIIth century AD relief portraying a boar hunt; (right) 1403 gravestone of Niccolò Di Somma, a Neapolitan knight (the towers which decorate the armour and the shield are the heraldic symbol of the family)

In the VIIIth century AD, during a period of great insecurity the inhabitants of Falerii Novi returned to their ancient town where they built a castle which gave its name to the new settlement. The oldest record about Civita Castellana is dated 994. In 1033 the seat of the bishop was moved from Falerii Novi to Civita Castellana. 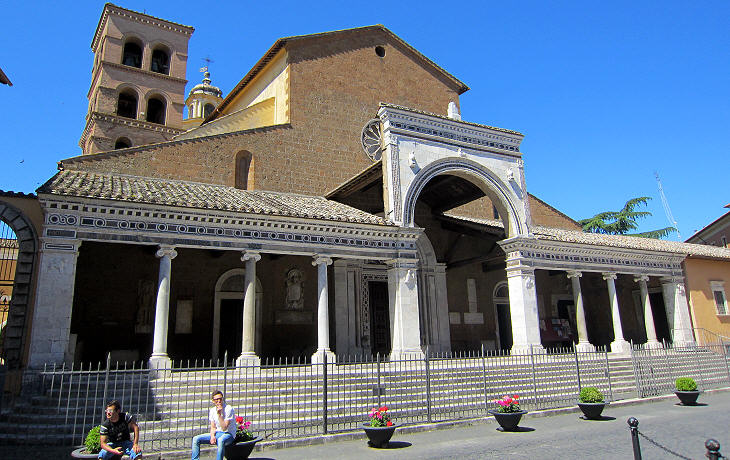 Civita Castellana became an independent township during the controversies between the German Emperors and the Popes. The wealth of the town led its inhabitants to build a large cathedral which was completed by a great portal in 1210. 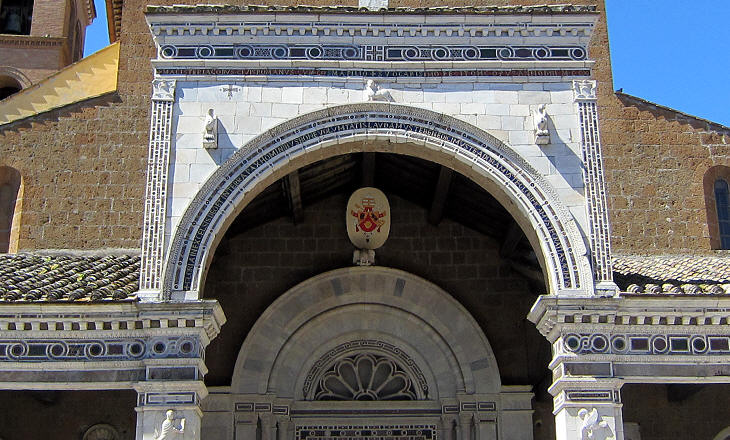 The portal is regarded as the masterpiece of the Cosma family of architects and mosaicists. Three generations (Lorenzo di Tebaldo, his son Jacopo di Lorenzo and his grandson Cosma di Jacopo) worked on the decoration of the church. Owing to the design of the portal they are regarded as forerunners of Renaissance architecture.
Other works of the Cosma can be seen at S. Scolastica and S. Benedetto at Subiaco and at S. Maria d'Aracoeli. 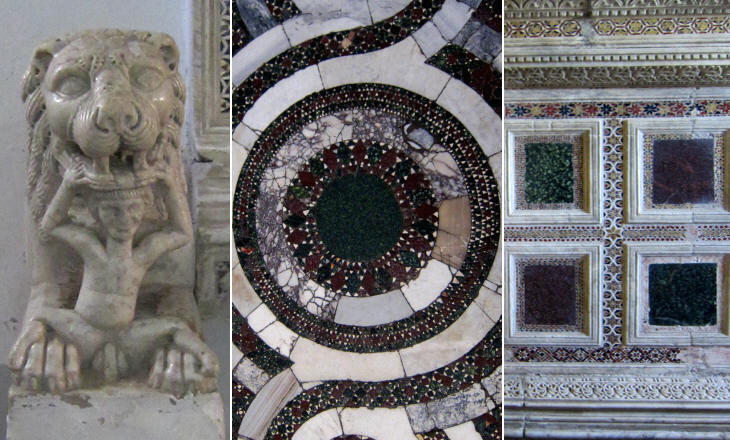 Cathedral: medieval decoration removed from its original location after the XVIIIth century renovation of the interior: (left) lion, symbol of Jesus, Strength, the Church etc. and in this specific case most likely of Charity; (centre/right) floor and choir screen with Cosmati decoration

The medieval works of art of Civita Castellana were regarded as void of interest for many centuries. The 1883 Central Italy Baedeker bluntly stated: Civita Castellana possesses nothing to interest the traveller except its picturesque situation. 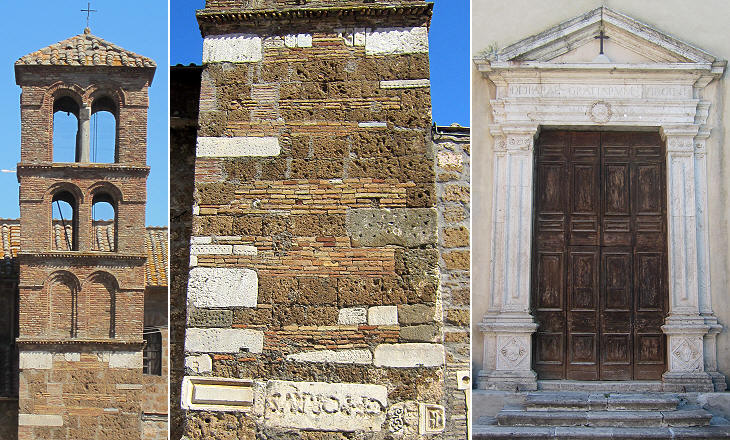 S. Maria del Carmine is believed to have been the first cathedral of Civita Castellana. Its elegant Romanesque bell tower (XIIth century) was placed above a previous construction made up of ancient stones and marbles. Following the return of the popes from Avignon, Civita Castellana lost its self-government and in 1377 it became a fiefdom of the Savelli.
The portal of S. Chiara was added in 1529 to a medieval church located at the entrance to the town from Ponte Felice. 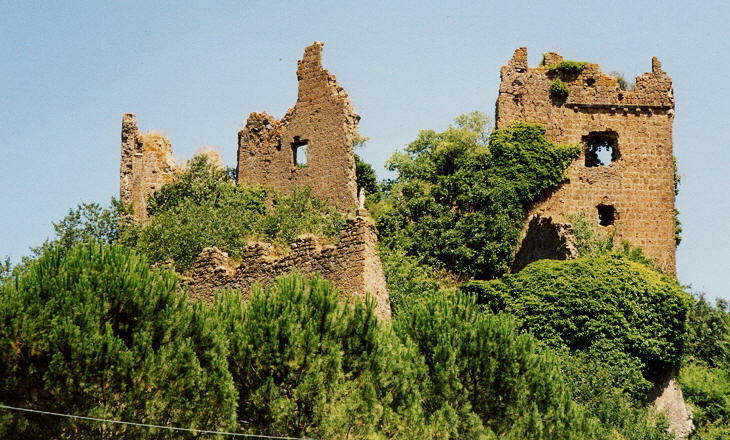 The fortifications of the town were complemented by a series of small castles. The most important one was built near the Tiber in the XIIIth century. For a time it belonged to Spedale di S. Spirito in Sassia which had several properties in the area, including Castel Sant'Elia. In 1790 it was given to the Andosilla, a family of Spanish origin. In 1798 it was set on fire by French troops when they invaded the Papal State. Cardinal Rodrigo Borgia was one of the most influential cardinals of the papal court in the second half of the XVth century and in 1492 he was elected Pope Alexander VI. His name is associated with the construction of several fortresses and the strengthening of Castel Sant'Angelo in Rome. He was governor of Civita Castellana in 1482-1492 and after he became pope he promoted the construction of a state-of-the-art fortress to replace the medieval castle. The fortress was designed by Antonio da Sangallo the Elder. Other images can be seen in a page on the Fortresses of the Popes and a gate of the walls of the town which celebrates Cardinal Borgia can be seen in a page on the Gates of the Popes. (left) Coat of arms of Pope Alexander VI and the inscription "A Domino factum est istud et est mirabile in oculis nostris" Psalms 118 and Mark 12:11 (This is the Lord's doing: and it is marvellous in our eyes). These words were said by Queen Elizabeth I when she heard the news of her succession to the throne; (right) well in the courtyard

Some years ago we went thither to visit the famous robber chieftain Gasparoni, imprisoned for twenty years under the papacy. Many of his band were with him, and there was certainly an unpleasant sensation when the door of the large room they inhabited was closed, and from the numerous little beds where they were lying, gaunt and with matted hair, the many figures rose up of men who were so long the terror of the Campagna, and whose murders under circumstances of the most detailed barbarity still are told by Castelli grandmothers to terrify the village circles.
Augustus J. C. Hare - Days near Rome - 1875
The fortress was completed by Pope Julius II and Antonio da Sangallo the Younger. From the early XIXth century and until the 1960s it was used as a prison. 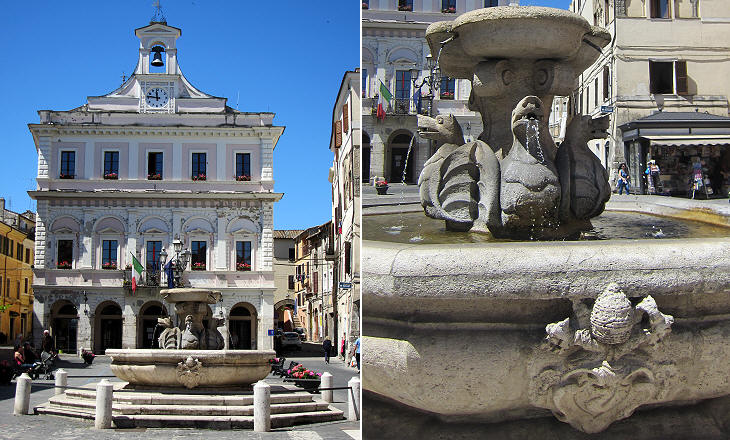 Fontana dei Draghi and the Town Hall in the background

In 1574 Cardinal Filippo Boncompagni was appointed governor of Civita Castellana by his uncle Pope Gregory XIII. He built an aqueduct and a fountain in the main square of the town. Because the heraldic symbol of the Boncompagni was a dragon, the spouts had the shape of dragons. Similar fountains were built in Rome at Piazza Navona and at Piazza della Rotonda by Giacomo Della Porta and later on at Villa d'Este (Tivoli) and at Villa Mondragone (Frascati). 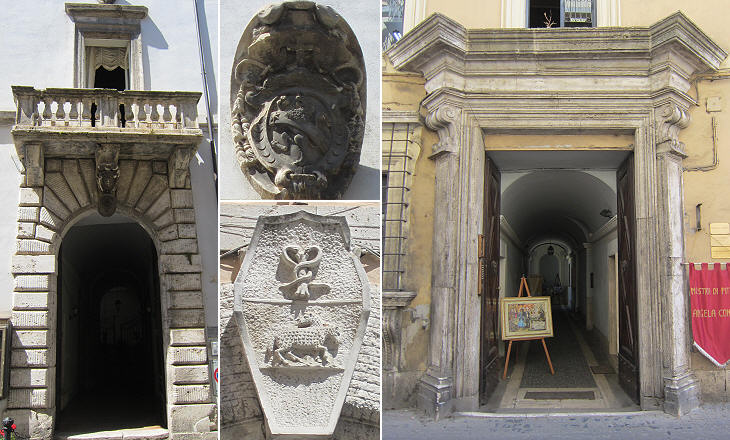 (left) Palazzo Montalto Belei; (centre-above) coat of arms of Pope Sixtus V when he was a cardinal (Francesco Peretti di Montalto); (centre-below) coat of arms of the Trocchi, a local noble family; (right) portal of a palace in Via Garibaldi 35 in the centre of the town which resembles that of Palazzo Gentili Del Drago in Rome

Via Flaminia was an ancient road linking Rome to Umbria and the Adriatic Sea. In 1606, following the opening of Ponte Felice, its route was slightly changed to make it cross Civita Castellana, thus helping the development of the town. The palaces built between the XVIth and the XVIIIth century indicate the presence of several wealthy families. The economy of Civita Castellana relied in part on faience-type pottery manufacturing, as the rocks around the town were rich in kaolin. 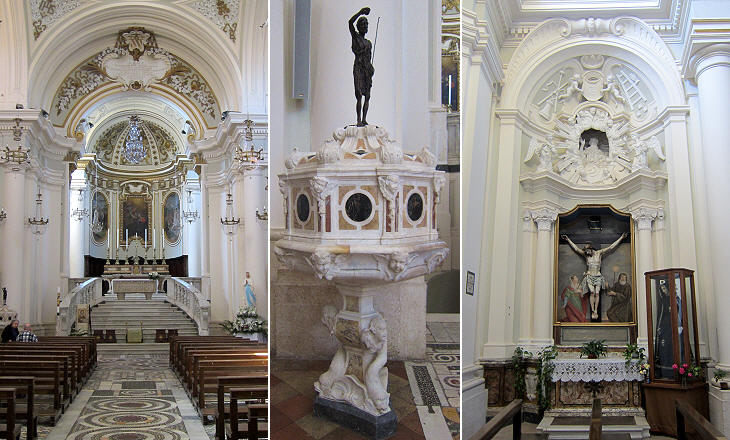 In 1740 a thorough renovation of the interior of the Cathedral was completed. It was promoted by Blessed Francesco Tenderini, Bishop of Civita Castellana, who wrote that the renovation was achieved through preces, pecunia, sudoribus (prayers, money and sweat) of all the inhabitants of the town. The new interior was designed by Gaetano Fabrizi. 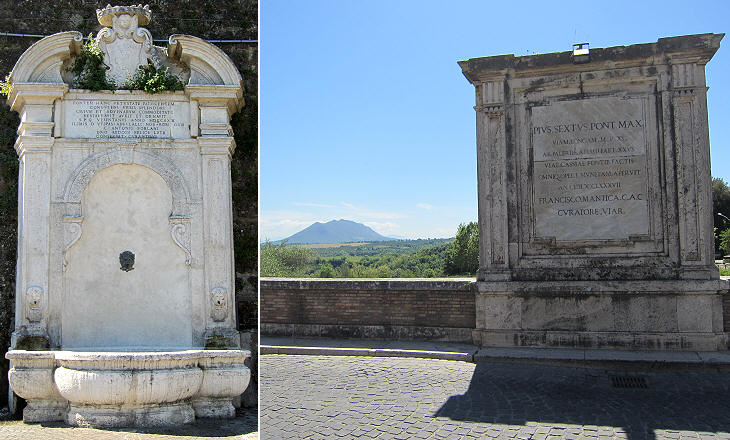 Wherever you turn around Civita Castellana, the ravine seems to pursue you, as if the earth were opening under your feet; so does it twist around the town. Each turn is a picture more beautiful than the last, and ever and again beyond the rocky avenues, Soracte, steeped in violet shadows, appears rising out of the tender green of the plain. The gorge has been compared to the famous Tajo of Ronda; it has no waterfalls and the cliffs are not as high, but it is quite as full of colour and beauty. Hare
Pope Pius VI increased the importance of Civita Castellana by opening a new road which shortened the route to Rome.