You may wish to see a page on the town or on the Etruscan Necropolis of Monterozzi first. 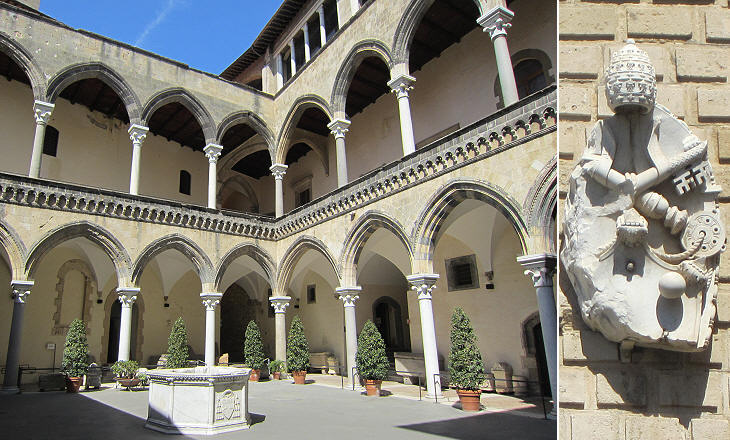 Close to the gate is the magnificent old Gothic palace of Cardinal Vitelleschi, whose splendid flamboyant windows are so little appreciated by the inhabitants of Corneto, that it has obtained the name of Palazzaccio - the great ugly palace. The courtyard has a beautiful cloister, with open galleries above, but it is lamentably neglected, and the palace is now turned partly into a barrack, and partly into a most miserable inn.
Augustus J. C. Hare - Days Near Rome - 1875 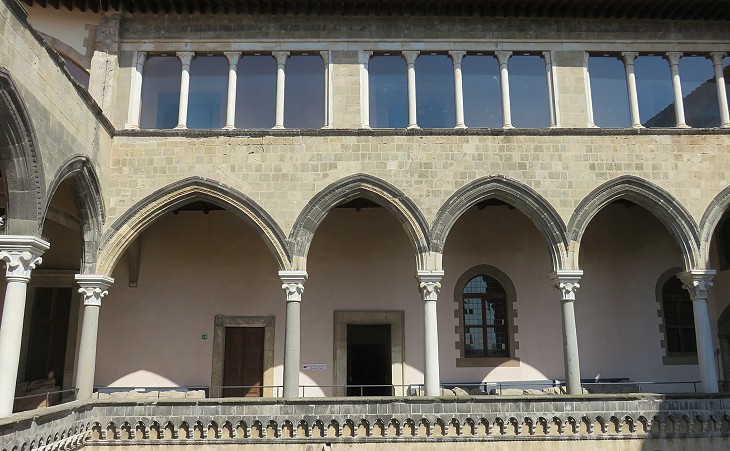 Upper part of the courtyard with a Renaissance loggia

Across the space from the café is the Palazzo Vitelleschi, a charming building, now a national museum - so the marble slab says. But the heavy doors are shut. The place opens at ten, a man says. It is nine-thirty.
David Herbert Lawrence - Etruscan Places - Published in 1932, but based on a visit made in April 1927.
In 1916 Palazzo Vitelleschi was turned into a National Museum of Archaeology, which houses Etruscan findings, especially those from the necropolises near the town. 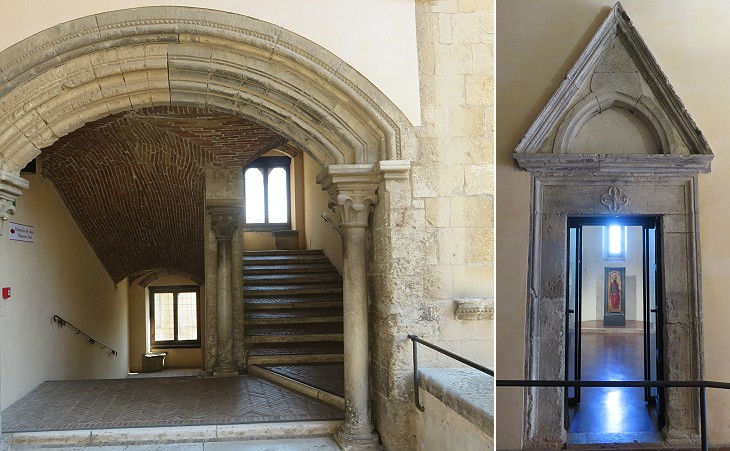 (left) XVth century staircase; because of its low steepness it could be used as a mule ramp, similar to the steps leading to Piazza del Campidoglio in Rome; (right) entrance to Cardinal Vitelleschi's chapel

Notwithstanding the many changes of use and property of the building, some parts of Palazzo Vitelleschi retain the aspect they had when its first landlords lived there. 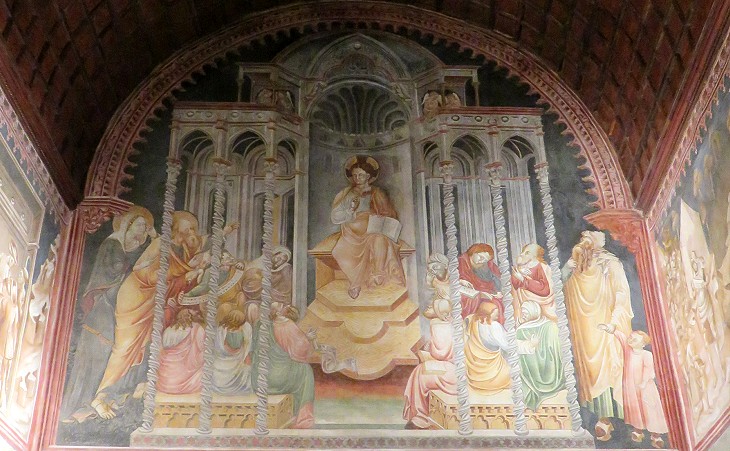 Only a small chapel's antechamber retains frescoes which most likely decorated many halls of the palace. The choice of portraying Jesus among the Doctors was perhaps suggested by the doctrinal disputes about the authority of the Popes which arose from the Great Schism and continued during the pontificates of Pope Martin V and Pope Eugenius IV. It could contain an indirect criticism of the opinion supporting the supremacy of the Council over the Pope. 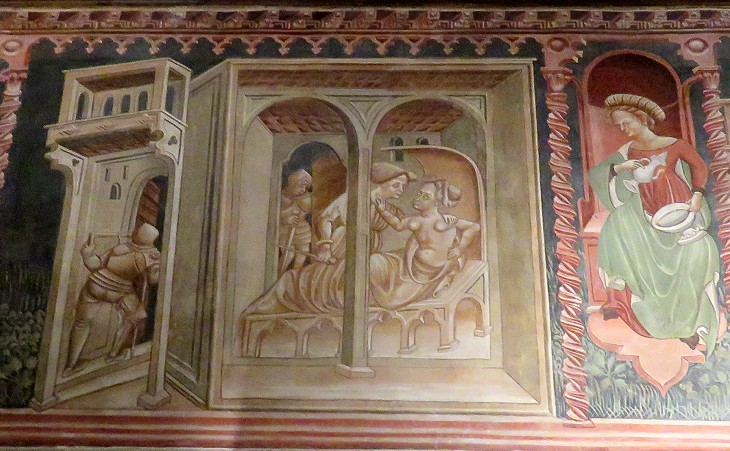 Chapel's antechamber: fresco depicting (left) the Rape of Lucretia and (right) Temperance, one of the Four Cardinal Virtues, who is portrayed while pouring water into wine

The other frescoes in the room do not have a clear religious meaning; the Rape of Lucretia is an indication of the growing interest for events related to Ancient Rome which began in the first half of the XVth century. The origin of the Four Cardinal Virtues can be traced to works by Plato, although they were eventually accepted by the Christian tradition. It is interesting to notice that clothes and buildings are those of the XVth century. 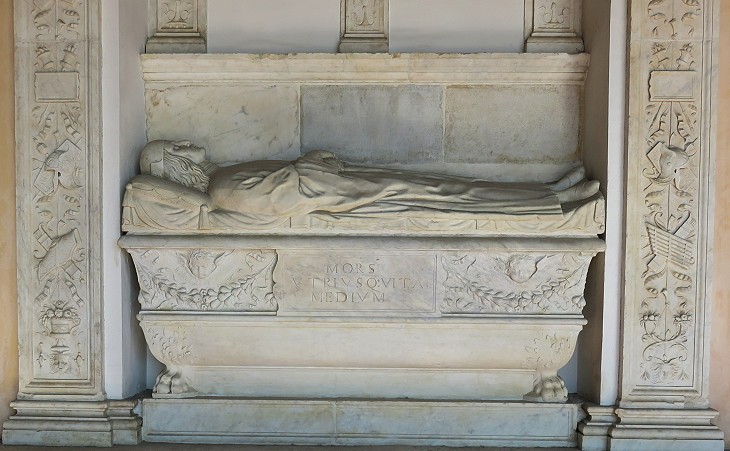 The Museum is devoted to Etruscan works, but it displays a small number of exhibits from churches and palaces of the town, among which a fine funerary monument by an anonymous sculptor. It follows the traditional medieval gisant pattern, but the decoration is based on Renaissance candelabra. 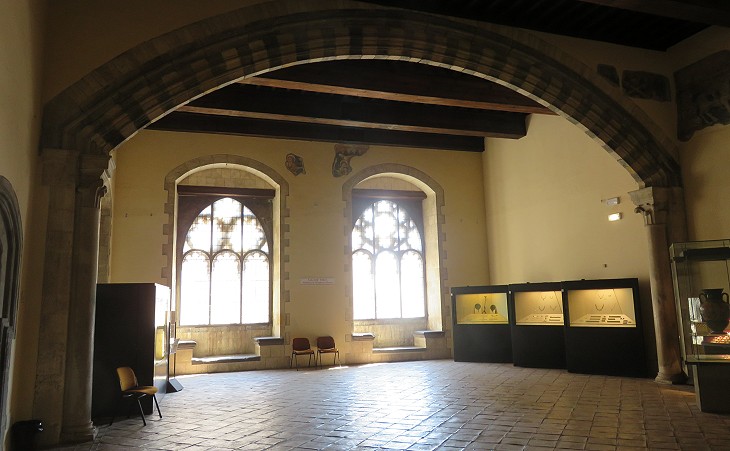 The museum is exceedingly interesting and delightful, to anyone who is even a bit aware of the Etruscans. It contains a great number of things found at Tarquinia, and important things. If only we would realize it, and not tear things from their settings. Museums anyhow are wrong. But if one must have museums, let them be small, and above all, let them be local. (..) How much happier one is in the museum at Tarquinia, where all the things are Tarquinian, and at least have some association with one another, and form some sort of organic whole. Lawrence 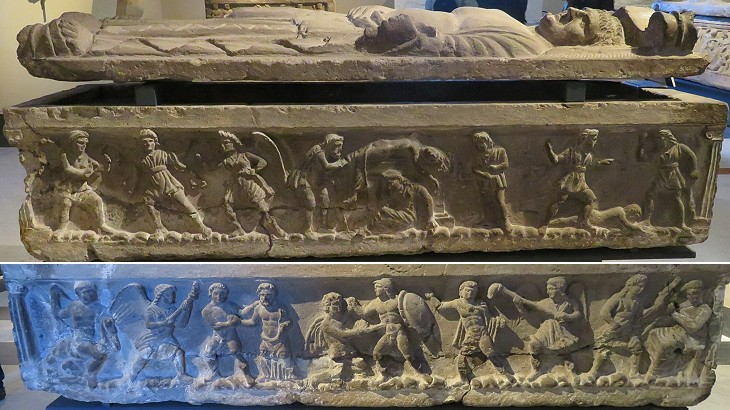 Musei Vaticani - Museo Gregoriano Etrusco: lid and box of two IIIrd century BC stone sarcophagi found at Tarquinia; the box depicts (above) scenes related to the killing of Clytaemnestra and Aegisthus by Orestes and (below) to the fight between Eteocles and Polynices, the two sons of Oedipus who killed each other

Some of the works of art which were found at Tarquinia before 1870 were moved to the Etruscan section of Musei Vaticani which was inaugurated in 1837. Lids of stone sarcophagi: (left) man with a "patera"; (right) woman with a dove, symbol of marital fidelity

In the open room upon the courtyard of the Palazzo Vitelleschi lie a few sarcophagi of stone, with the effigies carved on top, something as the dead crusaders in English churches. And here, in Tarquinia, the effigies are more like crusaders than usual, for some lie flat on their backs, and have a dog at their feet. (..) If it is a man, his body is exposed to just below the navel, and he holds in his hand the sacred patera, or mundum, the round saucer with the raised knob in the centre, which represents the round germ of heaven and earth. (..) And this patera, this symbol, is almost invariably found in the hand of a dead man. But if the dead is a woman her dress falls in soft gathers from her throat, she wears splendid jewellery, and she holds in her hand not the mundum, but the mirror, the box of essence, the pomegranate, some symbols of her reflected nature, or of her woman's quality. But she, too, is given a proud, haughty look, as is the man: for she belongs to the sacred families that rule and that read the signs. Lawrence 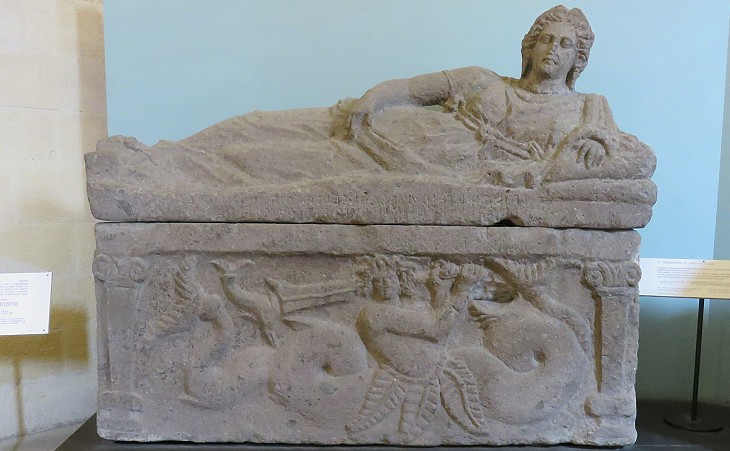 Sarcophagus of a member of the Partunus family with a depiction of Scylla, a sea-monster on the box

Usually the carved figure of the dead rears up as if alive, from the lid of the tomb, resting upon one elbow, and gazing out proudly, sternly. Lawrence. Actually in most sarcophagi the dead are portrayed while attending their funerary banquet.
Seven stone sarcophagi were found in the same tomb. From their poorly carved inscriptions it has been possible to establish that they belonged to the same family and their succession in time. The most recent ones show the influence of contacts with Rome, while still retaining some elements of the Etruscan tradition. 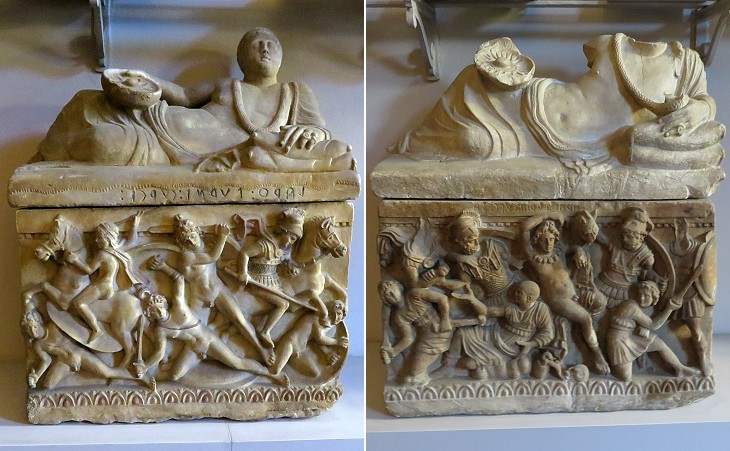 Archaeological Museum of Florence: Etruscan cinerary urns of the IInd century BC

Eventually the Etruscans used small sarcophagi as cinerary urns the lid of which was consistent with their traditional way of depicting the dead whereas the box was decorated with reliefs depicting Greek subjects.

Sarcophagus of a member of the Partunus family with a relief on the box which depicts the funerary procession of the dead sitting on a chariot; he is led to the underworld by a winged god and is followed by a lictor, a Roman officer who escorted magistrates

In an entrance room from the cortile lie a few of the long sarcophagi in which the nobles were buried. (..) These sarcophagi and effigies here all belong to the centuries of the Etruscan decline, after there had been long intercourse with the Greeks, and perhaps most of them were made after the conquest of Etruria by the Romans. So that we do not look for fresh, spontaneous works of art, any more than we do in modern memorial stones. The funerary arts are always more or less commercial. The rich man orders his sarcophagus while he is still alive, and the monument-carver makes the work more or less elaborate, according to the price. The figure is supposed to be a portrait of the man who orders it, so we see well enough what the later Etruscans look like. In the third and second centuries B.C., at the fag end of their existence as a people, they look very like the Romans of the same day, whose busts we know so well. Lawrence 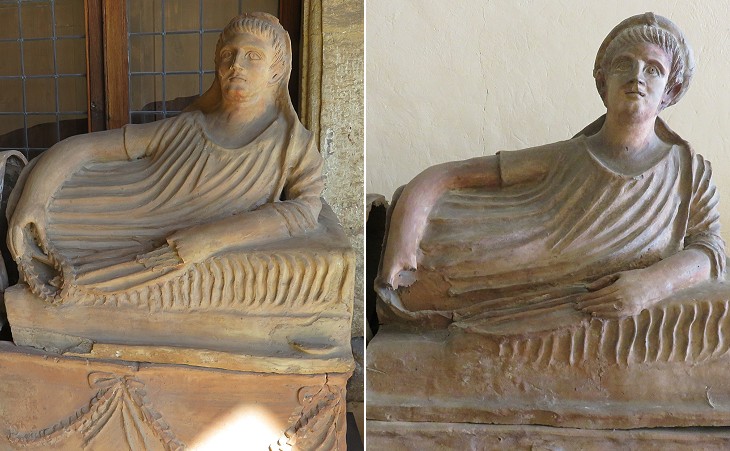 The Etruscans used nenfro, a local volcanic stone for their statues and reliefs; unfortunately it could not be easily worked and they often turned to terracotta for finer, but very fragile, results. Sarcophagus of the Spouses, the best known Etruscan terracotta sarcophagus was found broken into some 400 pieces.
You may wish to see other stone and terracotta sarcophagi which were found at Tuscania, north of Tarquinia. 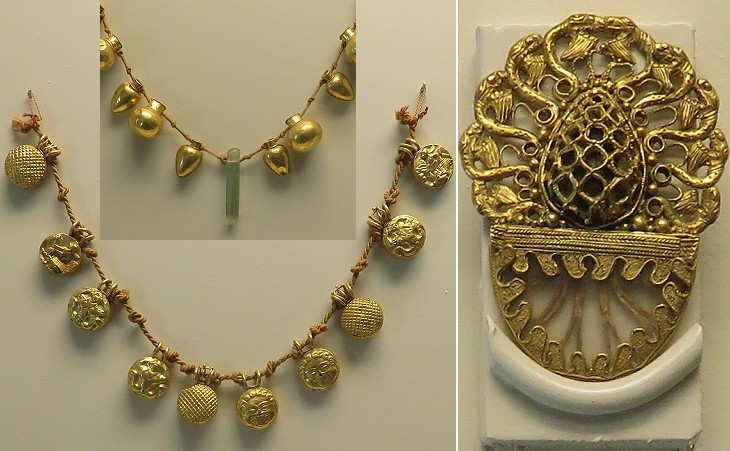 Jewels found in tombs near Tarquinia

Although the first archaeologists found that many tombs had been looted, a number of them still contained the funerary jewels which accompanied the dead to the Underworld. In particular a tomb found in 1870 was called Tomba delle Oreficerie (Goldsmithing) because of its many jewels. In 1916 thieves stole some 600 pieces from the Town Hall collection. Many Etruscan jewels before being acquired by the Italian State were modified to adapt them to the XIXth century usages and fashion. Their design originated a Victorian Etruscan Revival jewellery (and a number of forgeries). 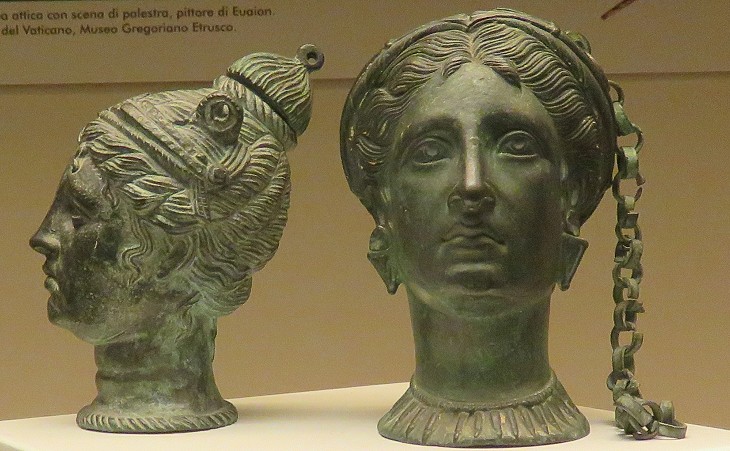 During those days (in 1553) some antiquities had been discovered in the country round Arezzo (one of the most important Etruscan towns). Among them (..) a number of little statuettes in bronze, had been brought to light; they were covered with earth and rust, and each of them lacked either head or hands or feet. Duke Cosimo amused his leisure hours by cleaning up these statuettes himself with certain little chisels used by goldsmiths. It happened on one occasion that I had to speak on business to his Excellency; and while we were talking, he reached me a little hammer, with which I struck the chisels the Duke held, and so the figures were disengaged from their earth and rust. In this way we passed several evenings, and then the Duke commissioned me to restore the statuettes.
The Life of Benvenuto Cellini written by Himself - Translation by John Addington Symonds - 1906
Etruscan metalwork was greatly advanced and some bronze pieces, in particular mirrors, were highly requested and have been found in many locations, including England. 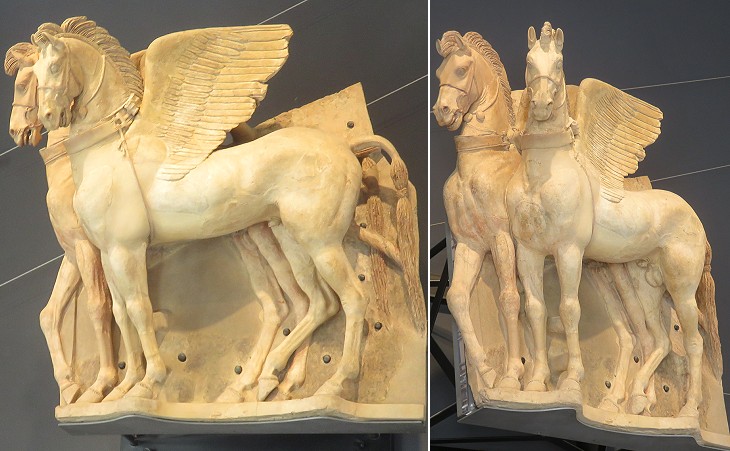 The very large majority of exhibits at the Museum come from tombs or are otherwise related to funerary practices. A rare work of art associated to an Etruscan temple was found in 1938 at Pianoro di Civita, the site of the ancient town, east of the medieval one. It was one of two terracotta reliefs portraying two winged horses drawing a chariot (that with the chariot itself is lost). It was broken into many pieces and it was painted. It was placed in the tympanum of the temple, of which only the base has been identified. It is known as Ara della Regina (Altar of the Queen) because the goddess to whom it was dedicated is yet to be identified. The Etruscans who lived in Rome built a small temple decorated with terracotta reliefs and statues at the foot of Campidoglio. 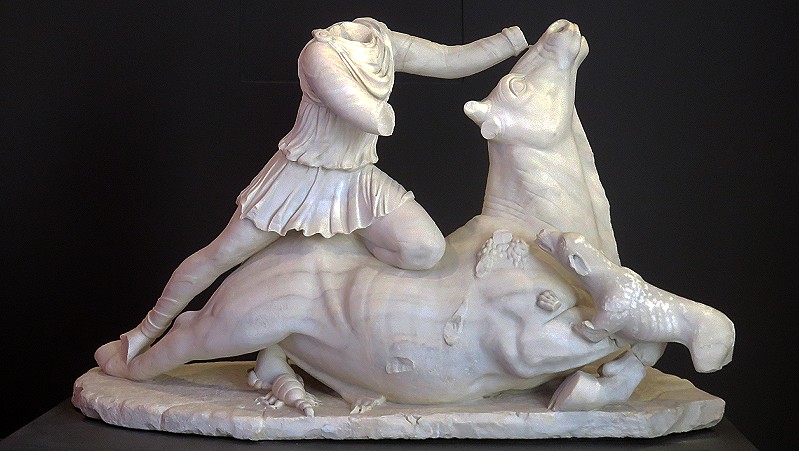 In 2014, similar to what occurred in 2007 near Lucus Feroniae, a police force in charge of protecting the Italian artistic heritage learnt about an ancient marble statue which was about to be sold. It was eventually ascertained that it had been found near Tarquinia. It is a IIIrd century AD work and therefore it does not belong to the Etruscan period of the town. Similar to Corneto, the medieval town, the ancient one had a harbour and merchants from the eastern parts of the Roman Empire settled there and introduced the worship of Mithra, although not to the scale experienced at Ostia, where nine mithraea have been identified.
You may wish to see other Etruscan works of art at Museo Archeologico di Cerveteri.