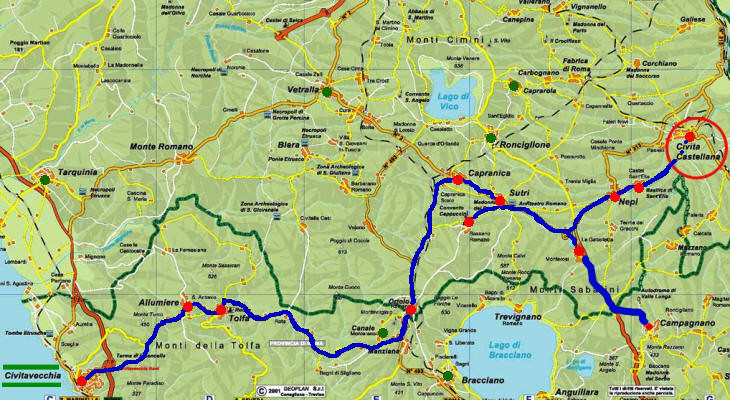 This itinerary starts from the Tyrrhenian Sea (Civitavecchia) and it ends near the River Tiber (Civita Castellana). It crosses an area of extinct volcanoes, the craters of which house lakes. Most of the towns shown in this section were founded on a little hill at the junction of two ravines. They have a long history which includes: Etruscan foundation, Roman conquest, medieval development as independent townships and finally inclusion in the State of the Church.
The itinerary crosses some ancient Roman roads: Via Aurelia which reached Pisa and Genoa at Civitavecchia; Via Cassia which reached Florence, northern Italy and France at Oriolo and Sutri; Via Flaminia which reached Rimini and the Adriatic Sea at Civita Castellana.

The town was founded by Emperor Trajan as an alternate harbour to Porto to ensure a steady flow of supplies to Rome. It was called Centumcellae (one hundred rooms) because of its warehouses. In 828 it was occupied by the Saracens and its inhabitants abandoned it. The Saracens used it as a base to attack Rome in 846, but in 848 they were ousted from Centumcellae and the old inhabitants returned and rebuilt it. They renamed it Civitavecchia which means old town (civita=town - vecchia=old). During the Middle Ages the importance of Civitavecchia was limited as the main port of Latium was Corneto which is located seven miles to the north. In 1462 alum was discovered on the nearby hills of Tolfa and its mining became a very important source of revenue for the Papal State (more on this topic further down in the page). Alum was shipped from Civitavecchia and the popes improved its facilities and fortifications.
In 1508 Pope Julius II commissioned the construction of a new fortress to Donato Bramante on the southern side of the harbour opposite a medieval castle, which was destroyed during WWII.
Bramante designed a rectangular fortress with four round bastions at the corners. This design was not the state-of-the-art in Italian military architecture because the round bastions did not ensure the best protection of the walls. At Civita Castellana and Nettuno Antonio da Sangallo the Elder had already designed more effective bastions. In the 1530s Pope Paul III ordered the construction of a massive keep which projected from the walls and ensured they were better protected. According to an undocumented tradition the keep was designed by Michelangelo and today the fortress is named after him. 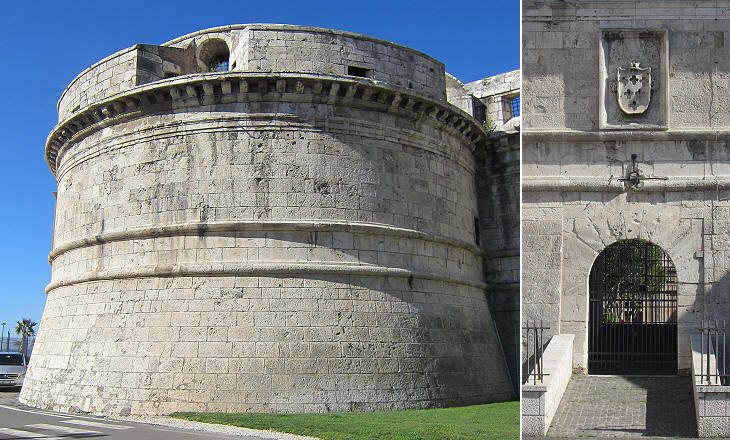 Forte Michelangelo: (left) one of the four round bastions; (right) entrance from the harbour

The fortress stood at the water's edge. Its proportions, the facing of the walls with travertine and their decoration give it a very harmonious appearance (see other images of Forte Michelangelo). The image used as background for this page shows the fleurs-de-lys which decorate the keep. They were the heraldic symbol of Pope Paul III. For a very similar decoration you may wish to see the Pope's family palace in Rome. 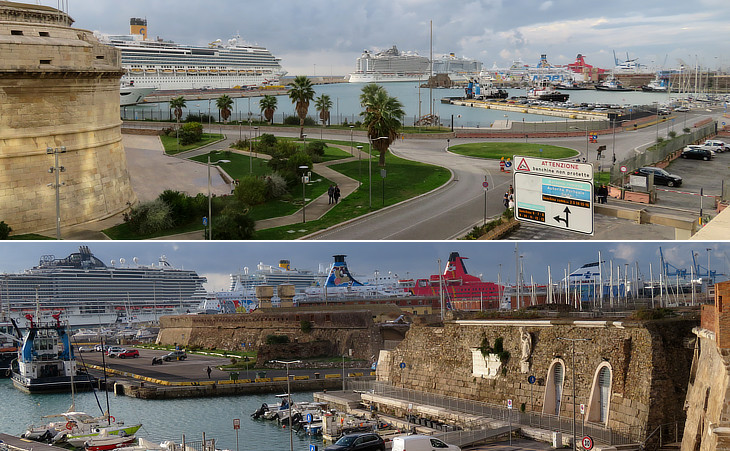 As Civita Vecchia was 1400 years since, so is it now. The artificial island, with its twin-towers at the mouth of the port; the long moles stretching out to meet it; the double passage, narrowed almost to a closing of the jaws; the amphitheatre of water within, overhung by the houses of the town, and sheltered from every wind - will be at once recognised. It would seem to have remained in statu quo ever since it was built by Trajan. Yet the original town was almost utterly destroyed by the Saracens in the ninth century; but when rebuilt, the disposition of the port was preserved, by raising the moles, quay, and fortress on the ancient foundations, which are still visible beneath them.
George Dennis - The Cities and Cemeteries of Etruria - 1848
Another route from Leghorn to Rome is by sea as far as Civita Vecchia, and thence by railway. This route is somewhat more expensive than the railway journey. Embarkation at Leghorn in the inner harbour. The steamers generally weigh anchor towards evening. Arrival at Civita Vecchia, and journey thence to Rome. The fortifications, built in the 16th and 17th cent., were recently restored by the French. The entrance to the harbour, in front of which lies a small fortified island with a lighthouse, is defended by two strong towers.
Karl Baedeker - Italy; handbook for travellers - 1883
Civita Vecchia is a port of not much importance, except that from here the regular steamer sails to Sardinia.
David Herbert Lawrence - Etruscan Places - Published in 1932, but based on a visit made in April 1927.
Civitavecchia is still the main ferry port from continental Italy to Sardinia, but in recent years also many large cruise ships call at Civitavecchia to allow participants to make a daily excursion to Rome. 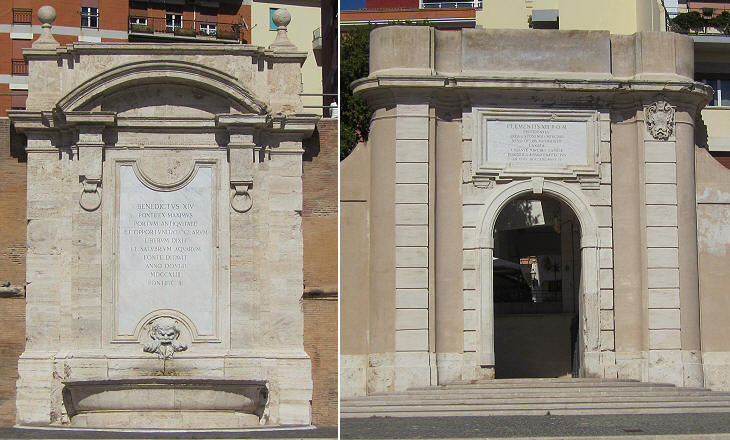 In the XVIIIth century Civitavecchia became the most important port of the Papal State on the Tyrrhenian Sea, yet its activities were mainly limited to exports of alum, because imported goods reached Rome via small ships and were unloaded at Ripa Grande, the city's river harbour. The town was embellished with a fountain designed by Luigi Vanvitelli, one of leading architects in Rome at the time of Pope Benedict XIV. A few years later Pope Clement XIII opened a monumental gate in the walls which separated the town from its harbour. 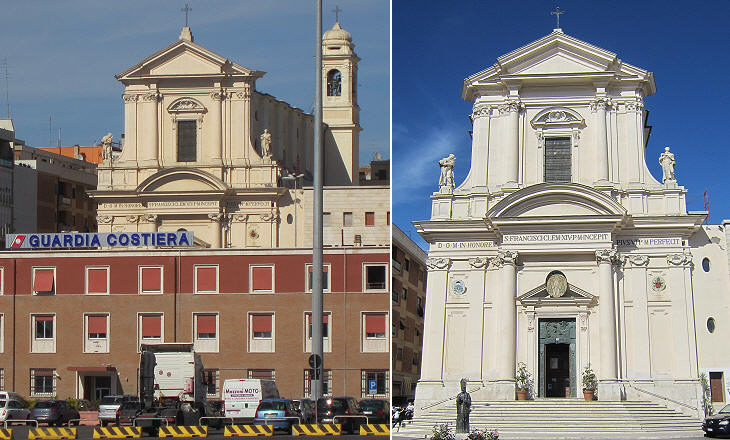 In 1825 Civitavecchia became a diocese and S. Francesco, its main church, became the town's cathedral.
After the annexation of the Papal State to Italy in 1870 the importance of Civitavecchia increased because it was the port of mainland Italy which was closest to Sardinia. In the XXth century it became the port of entry for iron ore directed to the steelworks of Terni. Because of the importance acquired in the communication and industrial system of the country Civitavecchia was heavily bombed during World War II. Nearly 90% of the buildings were so damaged that they had to be completely pulled down during the post-war reconstruction. S. Francesco was rebuilt as it was, but in a dull modern urban context. 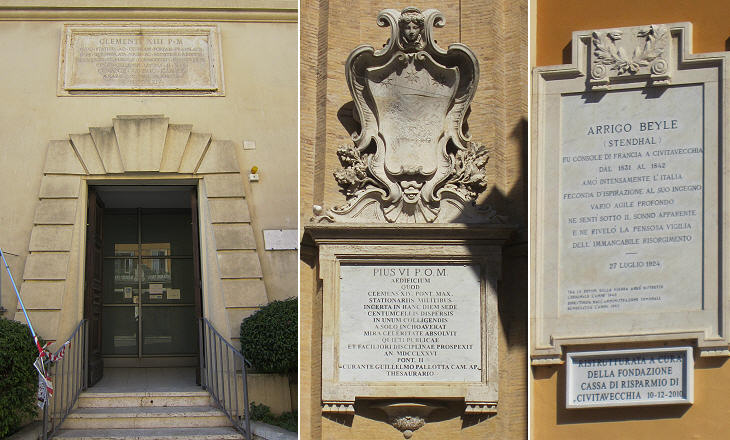 The inscription celebrating Stendhal speaks of his love for Italy, because he hated living in Civitavecchia. The town was not popular with foreigners.
Civita Vecchia is a place utterly devoid of interest, and in the eyes of those who arrive at Rome by sea, is only connected with much discomfort and an ardent desire to get away.
Augustus J. C. Hare - Days Near Rome - 1875. 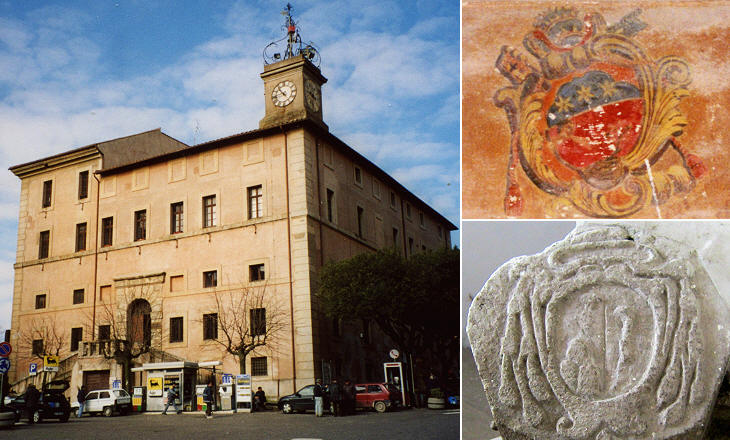 (left) Palazzo delle Allumiere; (right) coats of arms of Pope Pius VI (above) and of a prelate in charge of the alum mines (below)

Alum, hence Allumiere, is a double sulphate of aluminium and potassium, which is used in paper manufacturing, tanning of hides and dyeing. In the past the limited development of chemistry made the fields of natural alum as profitable as gold mines. The town of Allumiere was founded to house the miners and the administrative offices, so its main building is not a town hall, but the palace where managerial and accounting activities were performed. It was completed in 1580. 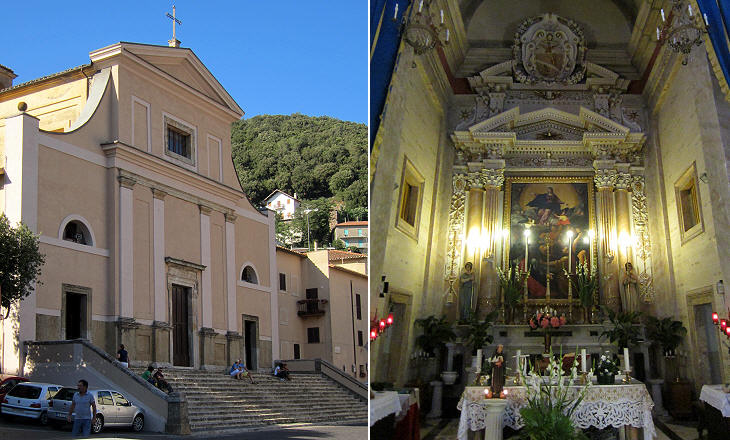 The Genoese held the monopoly over the alum trade for centuries, but in 1455 Sultan Mehmet II conquered Foca in Asia Minor where the Genoese mines of alum were located. The Ottomans imposed heavy duties on exports and the discovery of alum fields at Tolfa was welcomed by all Christian nations, which feared to lose access to this important mineral. 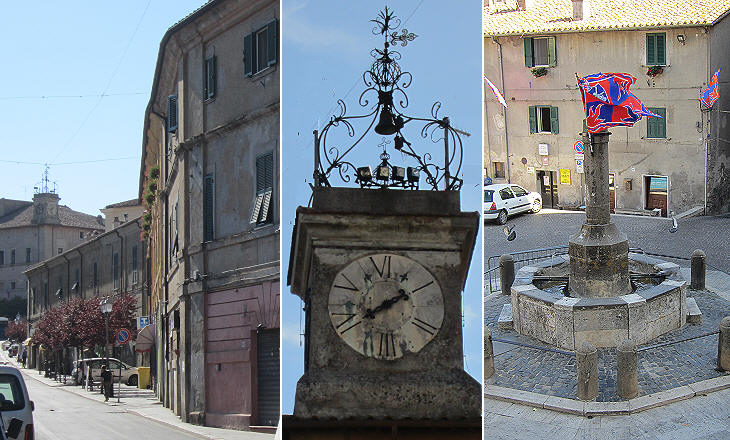 Usually the State of the Church did not run the mines directly, but gave them to a concessionaire in return for a fee and this was often a way to favour a friend or a relative of the pope. Agostino Chigi was one of the first concessionaires. He made such profits that he built La Farnesina, a villa which was decorated by Raphael and other famous painters. 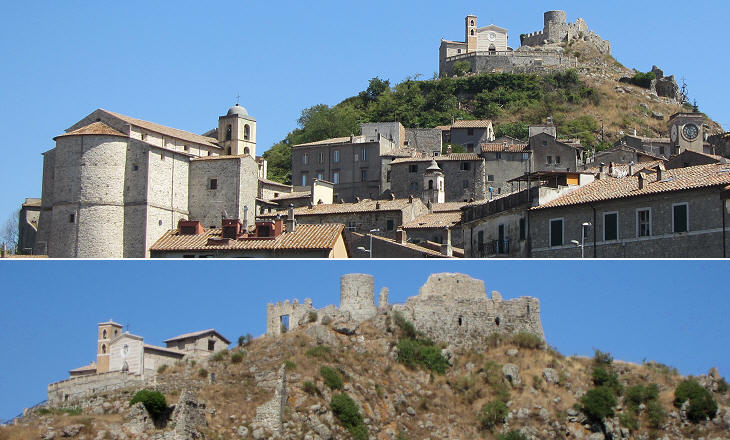 Views of la Rocca, the fortress

Tolfa is dominated by the ruins of a medieval fortress which once belonged to the Frangipane, a very powerful Roman family in the XIIth century. In 1799 French troops set fire to Tolfa and its fortress as the inhabitants opposed a strenuous resistance to the invaders. 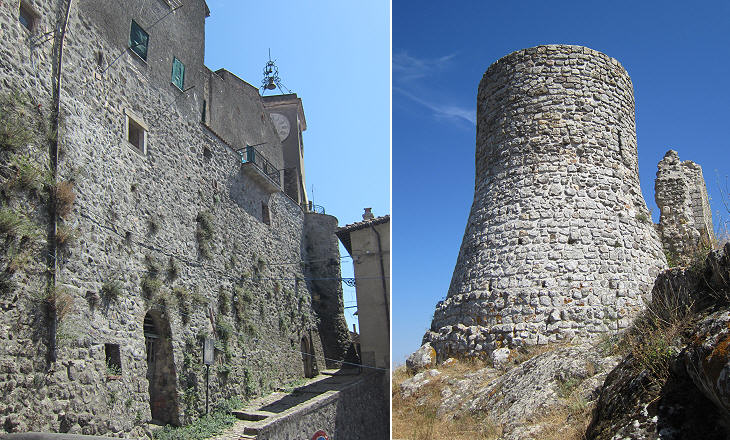 The fortress was built on a veritable eagle's nest protected on three sides by steep cliffs. The fourth side was protected by walls and towers with just one small gate. After the discovery of alum the Frangipane, whose power had greatly declined, were bought out by Pope Paul II. 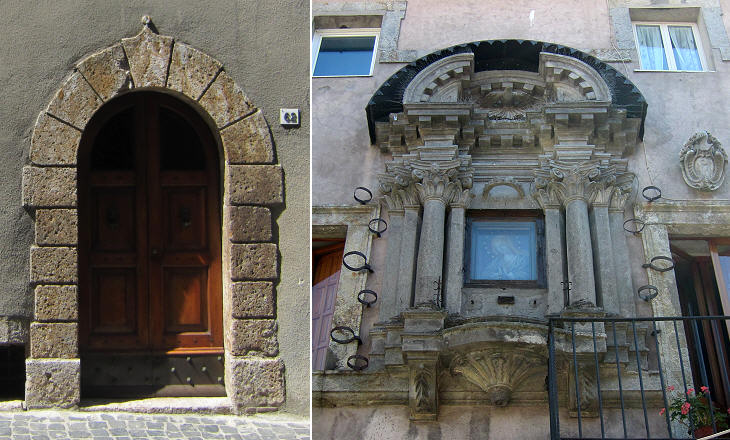 (left) A XVIth century house; (right) aedicule housing a sacred image on the palace of a local noble family

The inhabitants of Tolfa did not work at the mines, because these were manned with young men coming from other parts of the Papal State or from Tuscany, some of whom were pardoned of minor crimes. The mines however were part of the territory of Tolfa and they granted the town some revenues. In addition those who held managerial positions at the mines preferred to live at Tolfa. A new neighbourhood was built on a hill opposite the fortress and it still retains some interesting details. 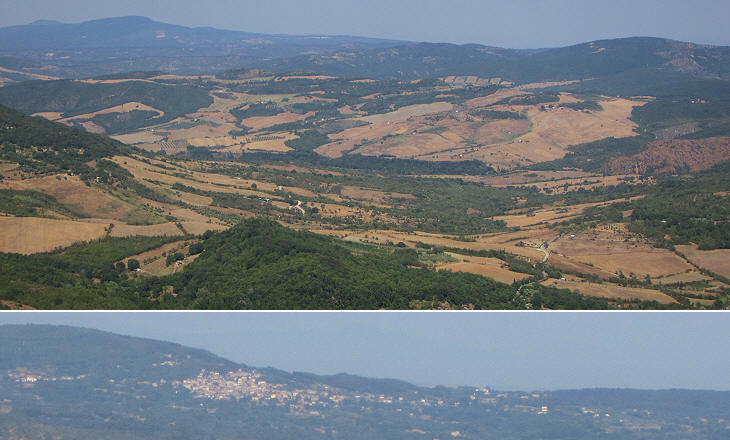 (above) View towards the hills surrounding Lake Bracciano from la Rocca; (below) detail showing Canale Monterano, near Oriolo, the next step of this itinerary