We quitted Bartan on the 18th of October (1836), and pursued our journey, travelling in a south-easterly direction. (..) October 20th. In the evening we arrived at the town of Zafaran Boli. We were at first received in the khan attached to the post-house, but being exposed to much disturbance there, from travelling and boisterous tatars and kawasses, Mr. Rassam went personally to request from the governor that lodgings might be given to us in the Christian quarter, a suburb which is called Kuran Keuy (the King's Village). This was acceded to, and we were glad to enjoy the repose which the next day, being the Sabbath, offered to us among these remnants of the Paphlagonian Greeks, confining our researches to visiting their church and perambulating the town.
William Francis Ainsworth - Travels and Researches in Asia Minor, Mesopotamia, Chaldea, and Armenia - 1842 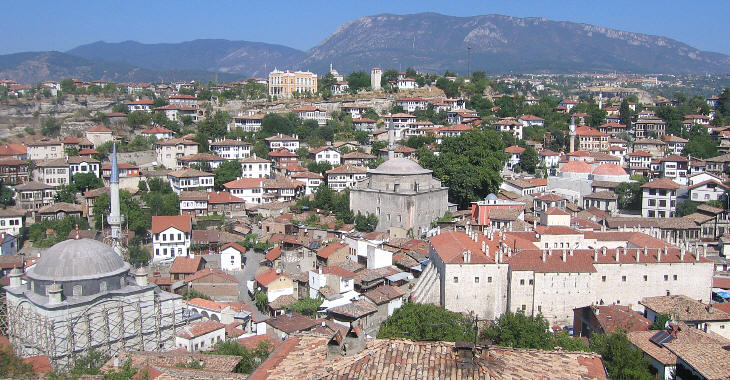 View of Carsi, the oldest part of Safranbolu, from Hidirlik Park

Zafaran Boli, a place hitherto little known to Europeans, is situated at the junction of two small streams, the united waters of which flow under the lofty arch of an ivy-clad bridge, and thence down deep rocky dells. The lower town itself, with its numerous minarets, khans, colleges, and hammams, stretches along the foot of the hills and up the valleys between them. Ainsworth 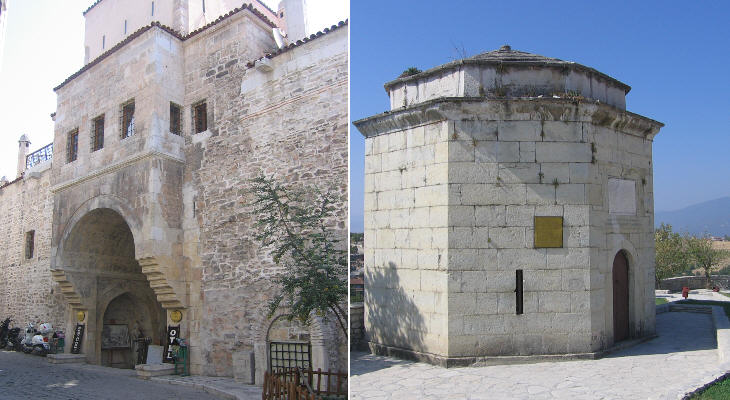 The chief trade is in saffron, the large production of which has rendered the place so flourishing, and gave to it its ancient name of Flaviopolis, and its modern one of Zafaran Boli. Ainsworth
Safranbolu owes its name to saffron, since the town was a trading place and a centre for growing it. The oldest part of the town is called Carsi (market) so it is not surprising to find at its very centre a large han (caravanserai). It was built in 1645 and it was used for its original purpose until the early XXth century.
Hidirlik means old stone and it is the name given to a park at the top of a hill which commands a great view over Safranbolu. It is named after a fine turbe (mausoleum). 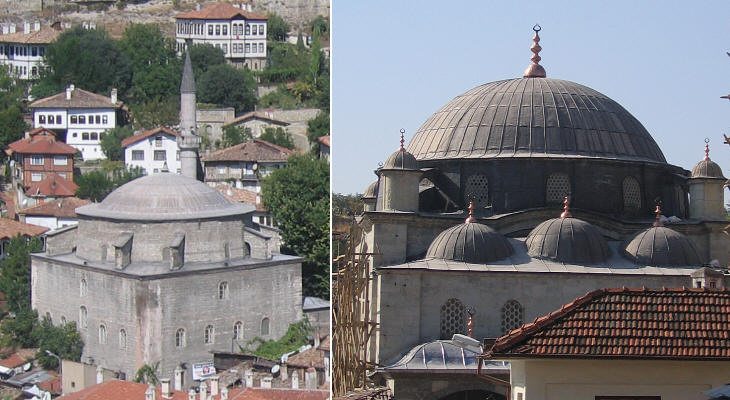 The town contains about 3000 houses of Mohammedans and 250 houses of Christians. It has a good market, four handsome jamis, several mesjids, colleges, tekiyyehs (monasteries of dervishes), two large khans, and four public baths. Ainsworth
Koprulu Mehmet Pacha was a very powerful Grand Viezir; he was appointed in 1656 during a very critical period for the Ottoman Empire: the Venetians were blocking the Dardanelles and therefore vital supplies to Constantinople. He had inherited from his father-in-law a large estate in the small town of Kopru (today Vezirkopru, not very far from Safranbolu) and he came to be called Koprulu (from Kopru). In 1661 he commissioned a large mosque in Safranbolu. Members of the Koprulu family held the post of grand viezir for most of the following fifty years.
Izzet Mehmet Pacha was Grand Vizier three times (a quite unique event): in 1773-1775, in 1781-1782 and in 1794-1798. He is mainly associated with having signed the Treaty of Kucuk Kaynarka in 1774. This was a very humiliating agreement which gave the Russian Empire its first direct access to the Black Sea. Izzet Pacha came from Safranbolu and in 1796 he commissioned a second large mosque in his hometown. 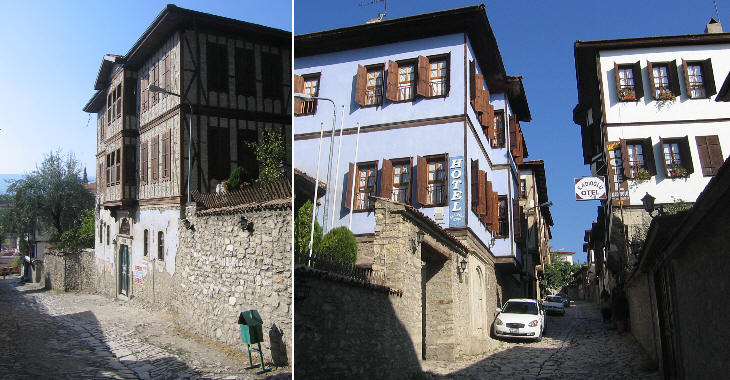 Zafaran Boli, it may be remarked, is one of the very few towns in Lesser Asia that has preserved its ancient prosperity under the Mohammedan rule. Ainsworth
The 1900 Times Atlas of the World indicates the town with the same printing type as other provincial towns covered in this section such as Kastamonu, Zile and Niksar.
In a today's atlas it is high unlikely that one can find Safranbolu; this because the economic development of the region has reduced the importance of the town. In the first half of the XIXth century coal was found at Zonguldak, a port on the Black Sea and in the early XXth century a railway linked that location with Ankara. The railway passed some ten miles to the west of Safranbolu and the town station was located in the village of Oglebeli. In 1939 steel factories were built at Oglebeli. They favoured the rapid development of a new town called Karabuk. This led to the decline of Safranbolu as an administrative centre and today the town is regarded as a suburb of Karabuk. The decrease in importance of Safranbolu explains why it was not impacted by the construction of new modern buildings and by the opening of large roads. It retains the appearance that most Turkish towns had until the 1920s. 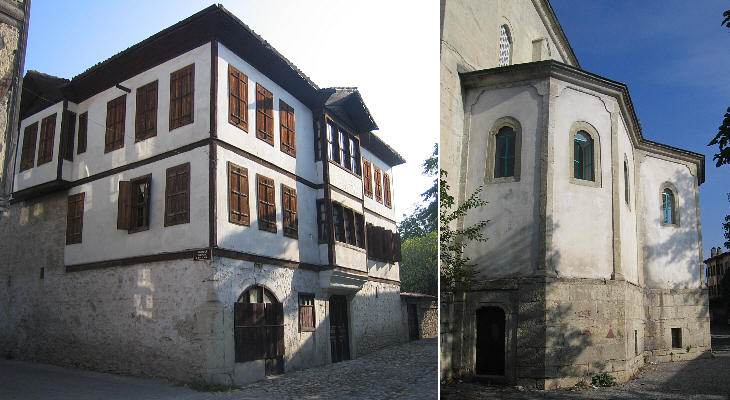 The fourth and last hill is Kuran Keuy, the Christian quarter. (..) At the Greek church, consecrated to St. Stephen, we were shown a limb of the martyr, preserved as a most invaluable relic, said to have been brought from Syria, and presented to that church by Theodora, wife of Justinian. Ainsworth
Another factor which had an impact on the decline of Safranbolu occurred in the 1920s when its Greek inhabitants left the town. They lived in Kirankoy, a quarter which has seen many modernizations, owing to its closeness to Karabuk. Yet the streets around the old church retain some traditional buildings. 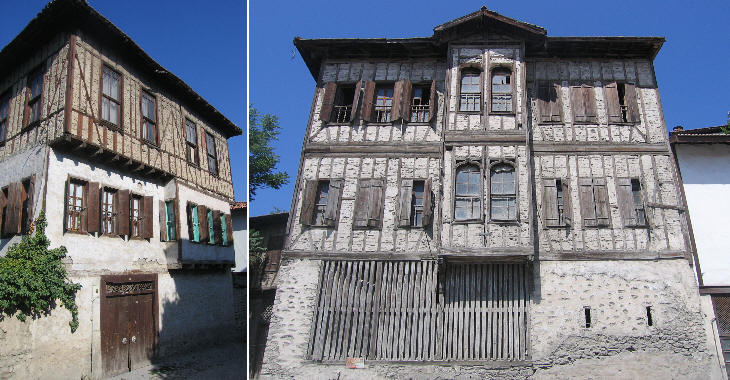 We returned to the town by the suburb of Boghazlu, so that we had now encompassed it in every direction, and certainly we never expected to find anything so tasteful and comfortable as the country mansions are, which constitute these suburbs. Ainsworth
In 1994 Safranbolu was added to the UNESCO World Heritage List for having retained its Ottoman urban landscape. The inclusion in the UNESCO list meant for the town a second life; many old houses have been turned into boutique hotels and there are many restaurants and cafès. Some buildings have been renovated and adapted to their new purpose, however many houses are untouched.

The upland above terminates over the town, in several distinct tongues of land, having rock terraces at the summit, and steep acclivities descending into the town. The most easterly of these headlands is occupied by a new barrack, and its attached jami; the next bears the ruinous walls of an ancient fortress. Ainsworth
What could have happened at Safranbolu if the town had not lost its importance is exemplified by Eski Hukumet Konagi (Old Government House), a large early XXth century building: the old castle of the town was pulled down to make room for it. Its style does not fit at all with the Ottoman urban landscape. 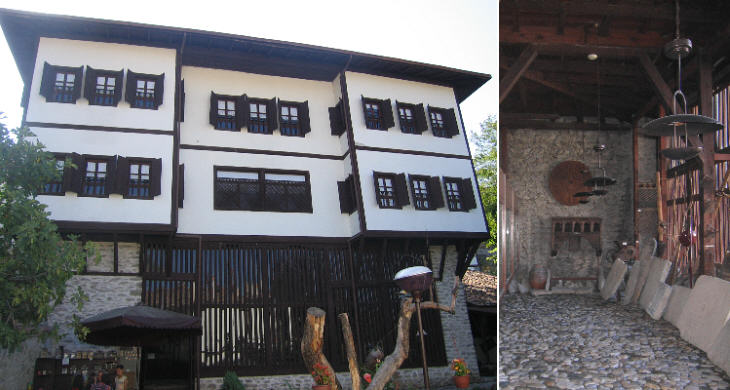 Safranbolu has preserved its original appearance and buildings to a remarkable extent and the boundaries of the property are adequate to reflect the site's significance. There have been no major changes to the integrity of the property since its inscription, but it remains vulnerable to external pressures, and continuous efforts are needed to better preserve the traditional townscape and retain its integrity.
From the UNESCO Brief Synthesis of the Outstanding Universal Value of Safranbolu
Kaymaklar Konagi is a museum house where the everyday life of a well-off XIXth century Ottoman family has been recreated. The owner of the building was the commander of the local military garrison and its house is known by his rank Kaim-Makam (Lieutenant-Colonel) rather than by his name (Haci Mehmet Efendi). The ground floor had walls made of stone and it was mainly used as a storage facility. Furniture was kept to a minimum; in general the only fixed piece of furniture was a sofa along the walls; everything else was brought in when needed; mattresses and bed linen were kept in wall cupboards. 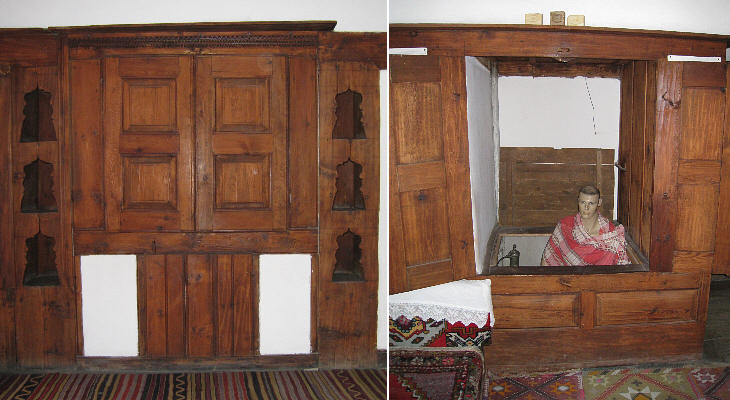 The image used as background for this page shows the model of a typical Ottoman house.