We embarked at Mytilene, and landed at Smyrna. The present town makes a very fine appearance from the water. This city is towards the south east corner of a deep bay. (..) This bay is three leagues wide at the west end; about a mile from the south side of it there is a steep rocky hill, divided by a narrow vale from the hills to the east. The castle of Smyrna stands on this hill, which extends about half a mile to the west towards the sea. (..) There is a narrow plain spot between the castle and the sea; the present town is situated on it, and extends up the side of the hill.
Richard Pococke - A Description of the East and Some Other Countries - 1745
Smyrna, today Izmir, is located at the end of a deep gulf of Turkey's Aegean coast. Archaeologists have found evidence of a very ancient village not far from the site where settlers from the island of Mytilini (or Lesbos) established a colony in the Xth century BC. It was named Myrine, after a goddess who was worshipped in that part of the ancient world; the main town of the not so distant island of Limnos is called Myrina too.

(left) Walls of Kadifekale the fortress built on the ancient acropolis; (right) view (from Kadifekale) of modern Izmir (in the lower right corner the market of the Roman town)

The town might be about four miles in compass, and was of a triangular form; it seems to have extended in length about a mile on the sea, and three miles on the north, south and east sides, taking in the compass of the castle, which is very large, being not less than three quarters of a mile in circumference; the length of it is about twice the breadth; it is a very indifferent building, and stands on the remains of a strong castle; (..) it is all in ruins, except a small part at the west end, which is always kept shut up. Pococke
The acropolis of ancient Smyrna was built on a high hill near the sea by Alexander the Great in 334 BC when he relocated the inhabitants of the town from the northern to the southern part of the bay: the coast line was modified during the centuries by the deposits of clay, silt and sand left by a river (and more recently by the expansion of modern Izmir). The current fortress was built by the Byzantines and strengthened by the Ottomans. It is known as Kadifekale (Velvet Castle) and from there one can see the market square rebuilt by Emperor Marcus Aurelius after an earthquake destroyed Smyrna in 178 AD. The ancient harbour was located to the left of the market.

Smyrna was one of the finest cities in these parts, and the streets were beautifully laid out, well paved, and adorned with porticos both above and below; there was in it a gymnasium, a library, the Homerium, which consisted of a portico, temple, and statue, dedicated to Homer: For of the seven cities which contended for the birth of that great poet, it has been almost generally thought that Smyrna has the best title to that honour. There was also here a temple of Mars, a circus, and a theatre, and yet there is now very little to be seen of all thefe things; the reason is that the new city is built on the spot of the antient one, and most of the materials of it have been removed to serve for the modern buildings, and they are even now continually digging under ground for the stones. Pococke

There are remains up the side of the hill of many vaults and passages for water; and there are several arched vaults under houses, the entrances to which are well built, of large hewn stone: These vaults, doubtless, belonged to the houses of the old city. Pococke
The new market place/forum (in Greek agorà) built after the earthquake was a very large square surrounded on three sides by porticoes and on one by a basilica. It was located on the slope of the hill and the whole area was terraced. For this reason the entrances from the lower city (northern side of the market) were placed under the basilica.

The whole market was supported by a net of vaulted underground passages which had the objective of reducing the impact of earthquakes. The arch keystones were identified by a different colour (see a page on Roman Construction Techniques).

Roman market: parts of the portico: arches and lintels

The design of the portico (in Greek stoà) had a mixture of Greek and Roman features which was typical of Emperor Hadrian's taste: they were decorated with rows of columns, but the actual building was based on a series of arches: a couple of them have been reconstructed with the assistance of the French Archaeological Mission of Izmir. Another aspect of the new market was the combination of materials having different colours. Grey granite columns supporting white marble capitals can also be seen in the Pantheon of Rome. You may wish to see a page on the Stones of Rome.

The southern and eastern porticoes lie under the dwellings which over the centuries were built on the site of the ancient market. The visible part is due to the fact that it was used as a cemetery, both by the Byzantines and the Ottomans. On a visit to the archaeological site one can see some ancient statues together with finely engraved Ottoman tombstones. It was a cemetery reserved for the wealthiest families and the social rank of the dead was identified by a different kind of turban.
The image used as background for this page shows a detail of a Roman relief portraying Medusa.

As they have no good water in Smyrna, the ancients were very careful in making aqueducts, in order to supply the town with water. Pococke
Roman Smyrna could rely on an ample supply of water: Roman engineers were able to pump water to the top of the hill (as they did in Pergamum). The water was stored in a large underground cistern from which a net of conduits led it to the various fountains and baths of the lower city.
The first western travellers who reported about the cistern were so impressed by its vaults that they thought it was a large underground basilica.
Modern Izmir has more than 3,000,000 inhabitants: in recent years many immigrants came from the poor and rural districts of eastern Anatolia and some of them settled with their sheep and goats in the area near Kadifekale. By walking down the three miles which separate Kadifekale from the Kordon waterfront, where the best shops and restaurants are located, one can experience a journey through the striking differences of modern Turkey. 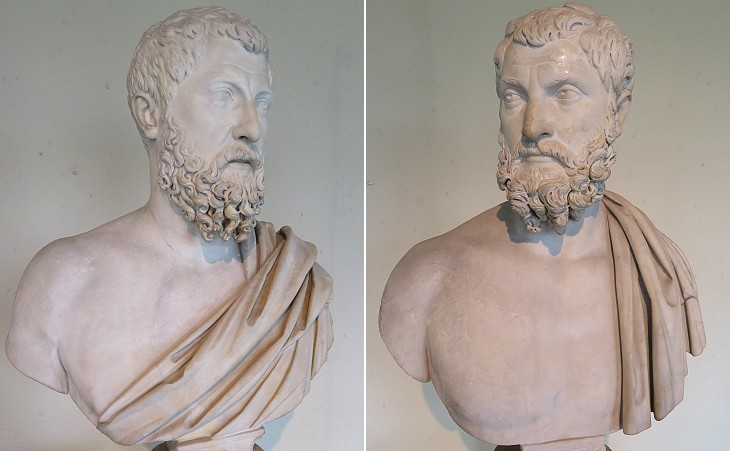 Brussels History and Art Museum: two busts of rhetors of the early IIIrd century AD which were found at "The Baths of Diana" today's Halkapinar in the environs of the Roman town

Twenty stadia from the city walls, there was another bay, on which Strabo says the old city of Smyrna stood: I take that to be the bay which sets in to the east, about half a league to the north of the present city, extending near to a fine source of waters called the baths of Diana, that fall it in a small stream. (..) The waters are warm in winter; and near them there are many foundations of buildings, and several arches of great antiquity. Pococke

Between 1344 and 1402 Smyrna was a possession of the Knights of Rhodes. The town was seized by Timur, the leader of Turco-Mongol tribes, who invaded most of western Asia. Grand Master Naillac made an attempt to reconquer Smyrna, but it is said that his troops lost heart when the heads of their fellow-knights who had capitulated were thrown at them from the walls of the castle.

Move to the Archaeological Museum of Izmir.