You may wish to see a page on Roman Smyrna first. 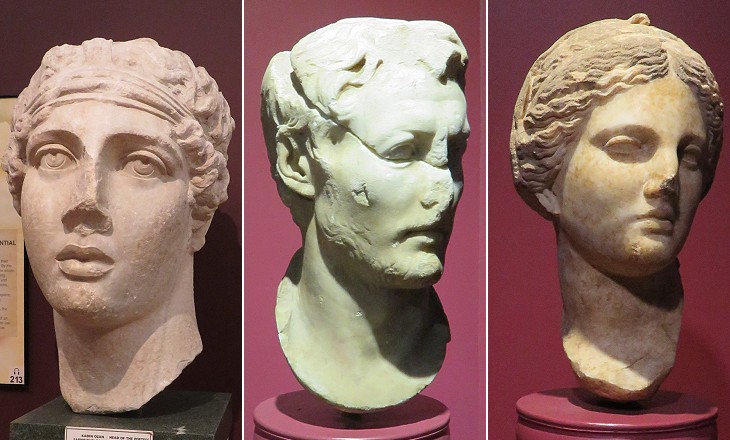 (left) Archaeological Museum of Istanbul: poetess Sappho (from Smyrna); (centre) head of man from Roman baths in Smyrna; (right) head of woman from a bouleuterion/odeon, a small covered theatre in Smyrna

Ottoman Sultans were generally aware of the historical and artistic value of the remains of antiquity which existed in their vast Empire. They used marble columns and capitals to embellish their mosques. Ancient statues and reliefs portrayed human beings could have been considered "idols" and therefore destroyed, but very rarely the Sultans felt compelled to follow this strict interpretation of Islam. They often made use of these works of art in their "foreign policy" by sending them as gifts to European monarchs or by allowing consuls to ship them home. Eventually in 1869 these practices were discontinued and an Archaeological Museum was opened in Constantinople.
The foundation of the Republic of Turkey in 1923 brought about the move of the capital to Ankara and the creation of archaeological museums at regional level. That of Smyrna/Izmir was established in 1924. In 1984 the collections were moved to a new building on a hill enjoying a commanding view over Kordon, the modern sea promenade of Izmir. They include some works of art found during the reconstruction of the town, following the fire which greatly damaged it in 1922. 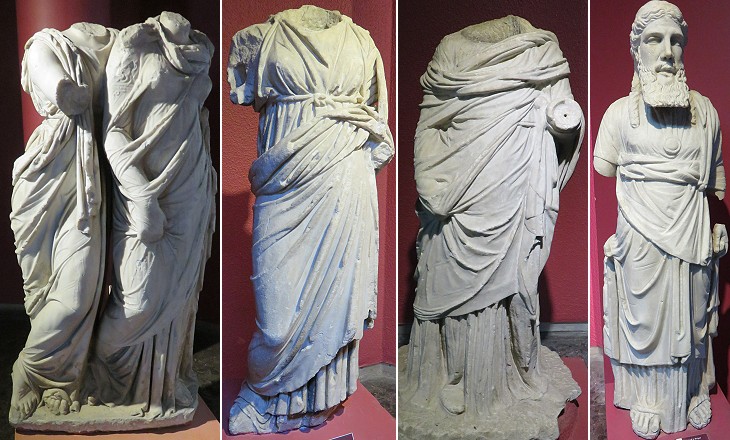 (left) Statues of women from the western portico of the market of Smyrna; (right) statue of a priest from Alikarnassos (Bodrum)

The collections were enriched with works of art found in locations spread over a vast territory around Izmir in addition to those found in town. In particular the museum houses important exhibits from Ephesus (e.g. a statue of Antinous from the Gymnasium of Vedius), Afrodisias and Miletus. 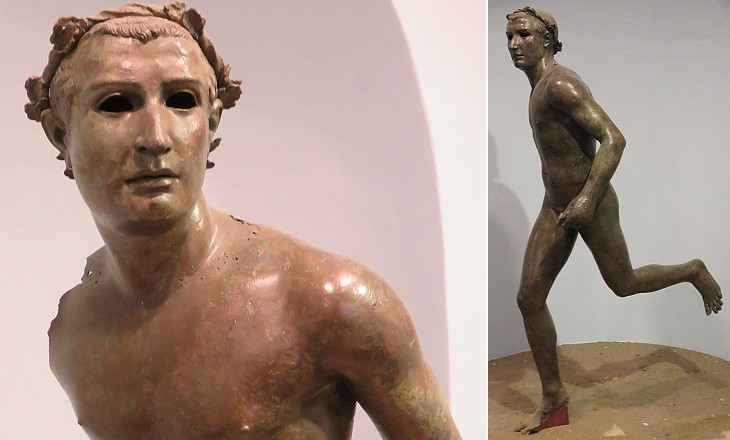 The Running Athlete (1st century BC or 1st century AD) from Cyme, an ancient port north of Smyrna

The use of bronze allowed sculptors to make statues with figures in action which were more difficult to make in marble. Bronze however was a very precious material and very few ancient bronze statues have not been melted to reuse the metal alloy. The "Running Athlete" was found at a small port, where perhaps it was to be shipped to Rome (you may wish to see the bronze works of art which were found in a shipwreck at Mahdia in Tunisia). The young man is crowned with a flower wreath:
With the flowers Diagoras has had himself crowned twice, and at the renowned Isthmus four times, in his good fortune, and again and again at Nemea and in rocky Athens.
Pindar - Olympian Ode VII - For Diagoras of Rhodes - Translation by Diane Arnson Svarlien. 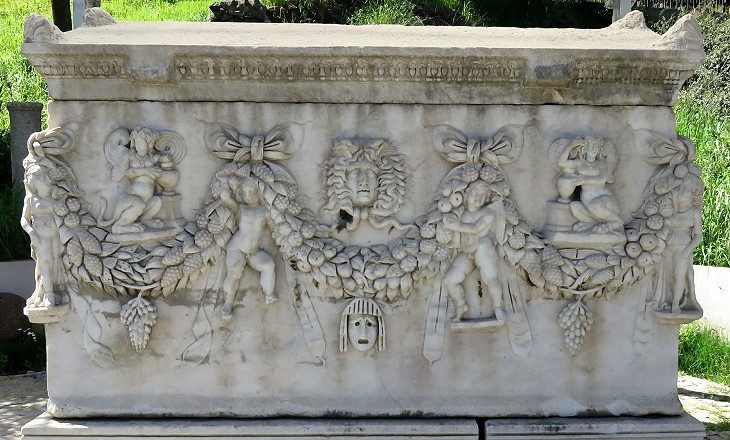 Sarcophagus decorated with festoons, heads of Medusa and sphinxes

The garden surrounding the building houses many interesting sarcophagi with a rich decoration. One of them (from Ephesus) is shown in a page on Roman funerary practices. They generally belong to the IInd century AD, a period of great prosperity in this and other regions of the Roman Empire. 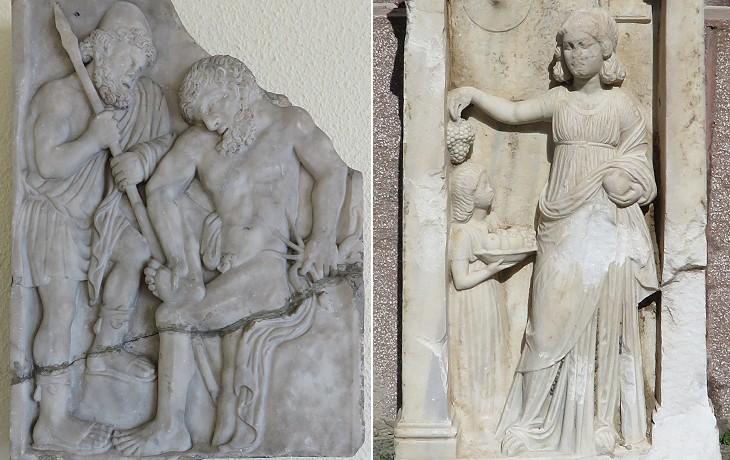 Reliefs: (left) a man with a sore foot (perhaps Philoctetes, a participant in the Trojan War, who was bitten by a sea snake, here depicted as a starfish or a jellyfish; the other person is Ulysses, with his typical felt cap; the two are the main characters of a play by Sophocles; (right) a gravestone

Fragments of sarcophagi and small gravestones provide the museum with a fine collections of reliefs. Very often they depict mythological events. The Labours of Hercules can be easily identified, but other reliefs are more puzzling and in the lack of inscriptions the persons they portray can only be guessed. Gravestones occasionally depict moments of domestic life and pay special attention to hairstyles and clothes. 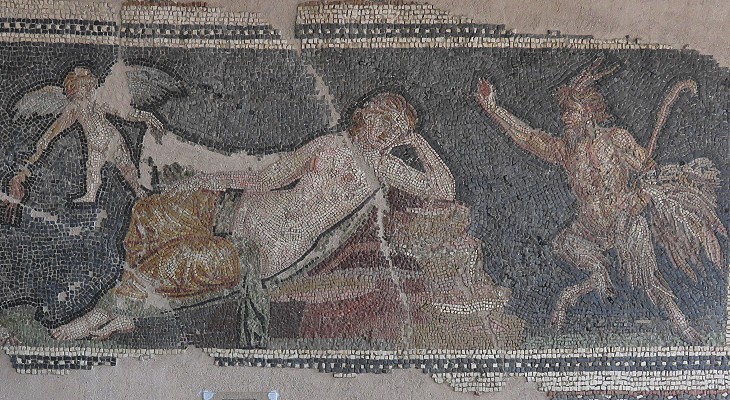 At the time of my visit in April 2015 halls housing some large mosaics were closed for renovation (in a previous visit in 2006 taking photographs of them was not allowed), but some small mosaics were on display in other halls, including one found at Phocaea. 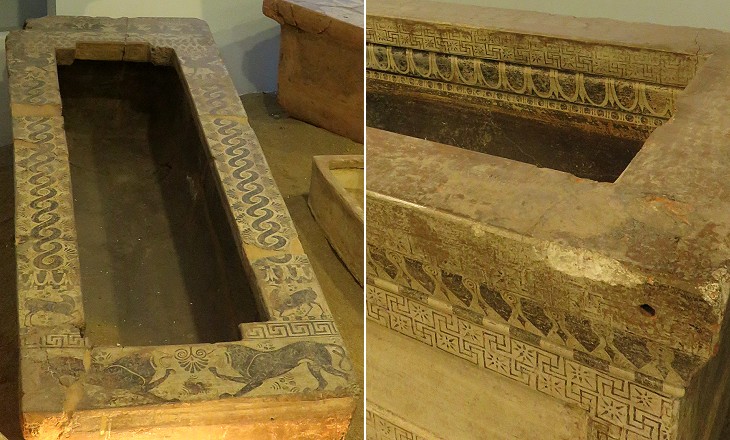 VIth century BC clay sarcophagi from Clazomenae, on the peninsula having Cesme at its tip

I went by sea from Smyrna to Vourla, which is a village a league to the south of a bay of the same name. (..) The port of Vourla must have been the port of the famous city of Clazomene, which was one of the twelve cities of Ionia. (..) What makes this place without all doubt to be the site of the antient Clazomene, is the island of saint John, about a quarter of a mile from the land; it is half a mile in circumference; there are remains of a broad causeway leading to it, and tho' it is almost destroyed by the sea, yet they pass over to the island on foot. This must be that island to which the Clazomenians retired for fear of the Persians, and joined it to the continent by the causeway; at the end of which there are some signs of an old wall, and a small arch; and there are two or three pieces of antiquity remaining at Vourla.
Richard Pococke - A Description of the East and Some Other Countries - 1745
Clazomenae was one of the most important towns of Ionia in the archaic period, thriving in pottery painting and later on in garum production. 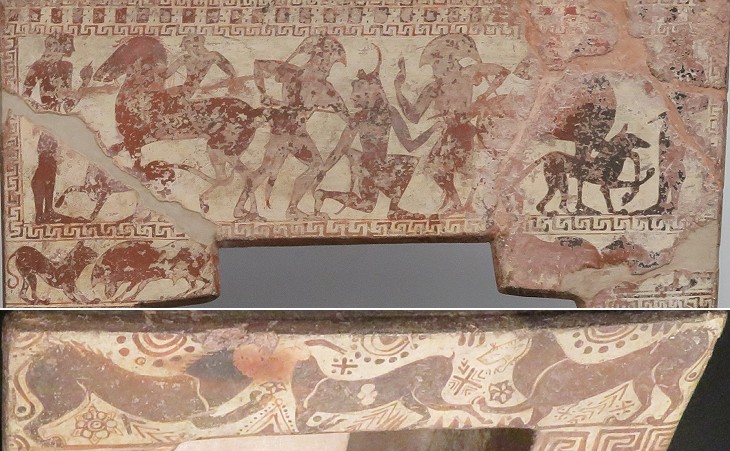 In 1920-1921 a number of clay sarcophagi were found by Greek archaeologists (the region was then occupied by the Greek army). Some of them are at the Archaeological Museum of Athens, others at other museums in Europe and those found in later periods in Izmir. Their flat rims are decorated with elaborate paintings, which sometimes cover the whole box. They bring to mind some Etruscan paintings in the tombs of Tarquinia. 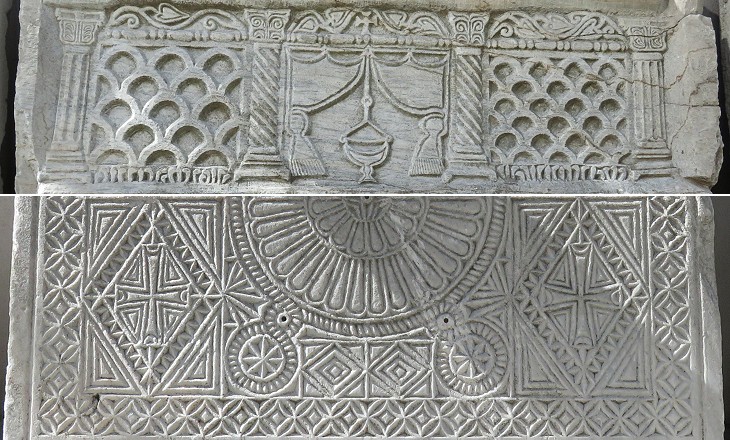 Byzantine choir screens. The image used as background for this page shows a detail of another relief

The garden houses a large number of reliefs of the Byzantine period and a few from the period when Smyrna was a possession of the Knights of Rhodes.

Ottoman capital carved out of an ancient altar

Wandering about the Museum 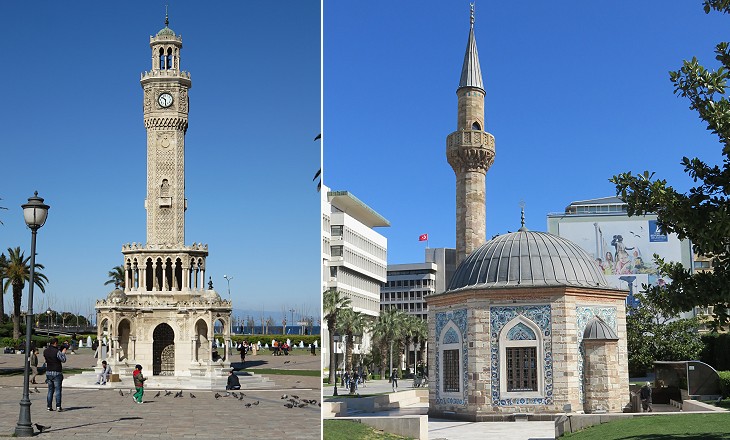 In September 1922 during the final stages of the war between Greeks and Turks for control of western Anatolia a fire destroyed the core of the city. Two small monuments at the southern end of the harbour (near today's Kordon waterfront) were spared and have become iconic landmarks of modern Izmir.
The Clock Tower was donated by German Emperor Wilhelm II and it was designed by French architect Raymond Charles Péré who spent most of his life in Turkey.
The small mosque was built by a local patroness in 1755 and it was decorated (at a later period) with tiles from Kutahya. 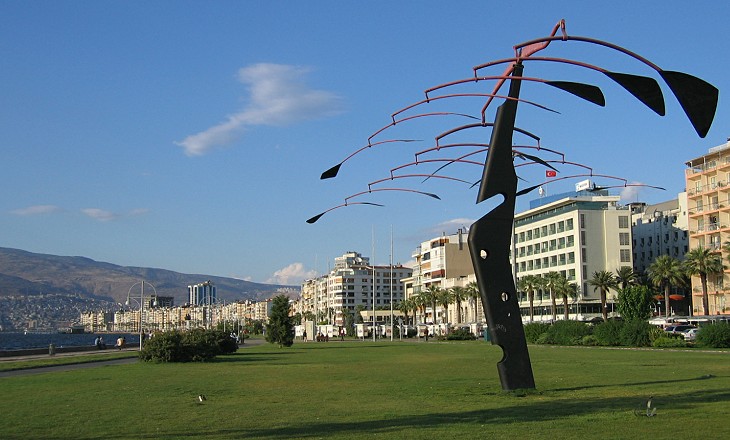