- St. Peter's Castle (Bodrum)
(relief in the fortress of Bodrum)

View of the fortress: western side, also in the image used as background for this page

It seems generally agreed that Boodroom occupies the place of the antient Halicarnassus; and a more inviting, or convenient situation could hardly have been selected for the capital of the kingdom of Caria. It rises gently from the head of a deep bay, and commands a view of the island of Kos. (..) In front of the town, a broad, square rock projects into the bay on which stands the citadel. (..) On the western side of the castle there is a small harbour, formerly sheltered by two stone piers, which are now demolished.
Francis Beaufort, Captain of HMS Frederikssteen, a frigate of 32 guns: Karamania; or a brief description of the South Coast of Asia Minor, and of the Remains of Antiquity collected during a survey of that coast, under the orders of the Lords Commissioners of the Admiralty, in the years 1811 & 1812 - Published in 1817
Today's Bodrum is one of the leading Turkish resorts: its marina is full of luxury boats, the town has plenty of restaurants and cafés. On the promenade along the harbour there are more real estate agents than other shops: they sell a variety of buildings from luxury villas to one bedroom flats in large apartment blocks, but regardless of size, facilities and location all the offers promise a view over the fortress of the Knights.

View of the fortress eastern side

The citadel is a far more respectable fabric than the generality of Turkish fortresses. Beaufort
In 1402 the Knights' fortress of Smyrna was seized by Timur, the leader of Turco-Mongol tribes, who invaded most of western Asia. Grand Master Naillac made an attempt to reconquer Smyrna, but it is said that his troops lost heart when the heads of their fellow-knights who had capitulated were thrown at them from the walls of the town.
It was important for the Knights to have a fortress on the mainland in order to control the coastal route: in 1406 Naillac therefore decided to fortify the ruins of ancient Halicarnassus which was located opposite Kos: the new fortress was called St. Peter's Castle (Engl Peter; Greek Petrunion; hence Bodrum).

We sought in vain for the small and occult harbour mentioned by Vitruvius. (..) Such a harbour is irreconcileable with the appearance of the present line of shore; but as Pliny asserts that the island Zephyrus, (perhaps the peninsula on which the castle now stands) had been joined to Halicarnassus; so, in the revolutions of time, this harbour may have been filled up. Beaufort
The palace of Mausolus was known for its secret harbour: its entrance is still visible in the fortress while its site is now silted: it allowed Mausolus and later on the Knights to receive direct supplies and to shelter a few ships. Grand Master Del Carretto in 1513-1521 built a round bastion to strengthen the land side of the fortress: he had done the same at Kos and at Rhodes.

I should be almost inclined to imagine that the present fortress occupies the place on which the Mausoleum had been erected. It was a favourite custom with the antients to place the tombs of their heroes on the sea-shore; and here, a bold elevated rock, conspicuous from the sea, the shores of the bay, and from all parts of the city, would seem to have been a spot eminently suited to the ostentatious grief of Artemisia. Beaufort
The access to the inner part of the fortress was protected by seven gates, which were built making use of ancient stones; in many parts of the fortress one can see pieces of columns, reliefs, statues which at first were all thought to come from Mausolus' tomb, but which now are assigned to a later period of the history of Halicarnassus.
The passage leading to the gates was full of twists and turns and the assailants had no protection from the arrows, stones and boiling oil which were thrown at them by the defenders.

We copied a great number of Greek inscriptions, dispersed in various parts of the town; and some in Latin, from the tablets in the wall of the citadel. Beaufort
The Knights did not forget they were a religious order and by placing sacred images on the walls they called for celestial help; several inscriptions did the same; that shown above is particularly moving:

(left to right) Towers of France, Italy, England and Germany

Each Langue had its own tower, the tallest one being that of France; the variety of their design adds to the beauty of the fortress and one understands why real estate agents advertise the view over the castle as a benefit of the houses they sell. From the fortress however the view over modern Bodrum is a very depressing one.

There are more than 200 coats of arms in the fortress; in addition to those of the Grand Masters some make reference to the countries of origin of the knights: these coats of arms are often part of a larger decoration.
On January 5, 1523 the knights surrendered the fortress to the army of Sultan Suleyman; they did so in compliance with the agreement concerning the capitulation of Rhodes.

(left to right) Mask of Hercules; coat of arms of Cardinal/Grand Master d'Aubusson; the chapel/mosque of the fortress; Ottoman tomb

The fortress, in addition to being an open air museum by itself, houses a permanent exhibition of statues, potteries and other artefacts found on board ancient vessels which sank in the region. 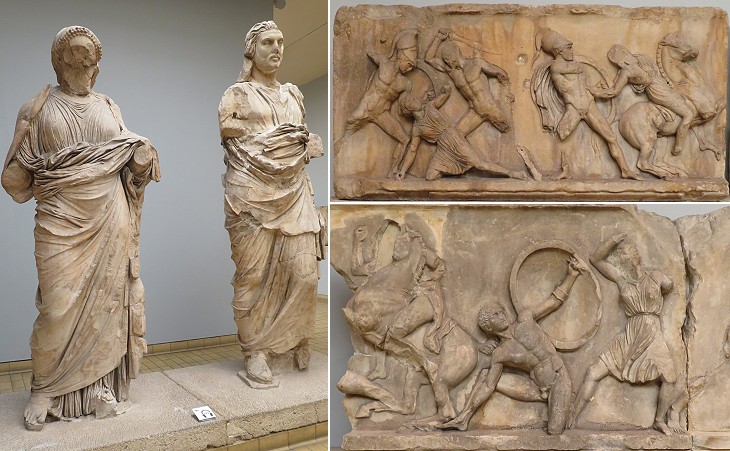 British Museum: (left) statues of Artemisia and Mausolus; (right) reliefs depicting a fight between the Greeks and the Amazons (IVth century BC)

We searched with eagerness, during our short stay, for some traces of the celebrated Mausoleum: but our toil was entirely fruitless. Yet if it stood on the higher ground behind the present town. Or even if its site be now covered with modern houses, still it is scarcely credible that the remains of a building of such peculiar shape, and of such sumptuous execution, should have been so completely removed or destroyed, as to leave no vestiges by which even its position may be recognised. Beaufort
The name of Mausolus is associated with the noun mausoleum which indicates a large and stately tomb. Artemisia, Mausolus' wife (and sister) built in memory of her beloved husband such a large monument that it was included among the Seven Wonders of the World. The ruins of the Mausoleum on a hill behind the town were excavated in 1857 by British archaeologist Charles Thomas Newton: he found statues and reliefs which are now in London.

British Museum: colossal statues from the Mausoleum of Halicarnassus

Unfortunately Newton did not care too much about the architectural structures of the building and by visiting Bodrum today one cannot figure out the aspect of the Mausoleum. At nearby Mylasa a small scale replica of the monument was built in the IInd century AD. 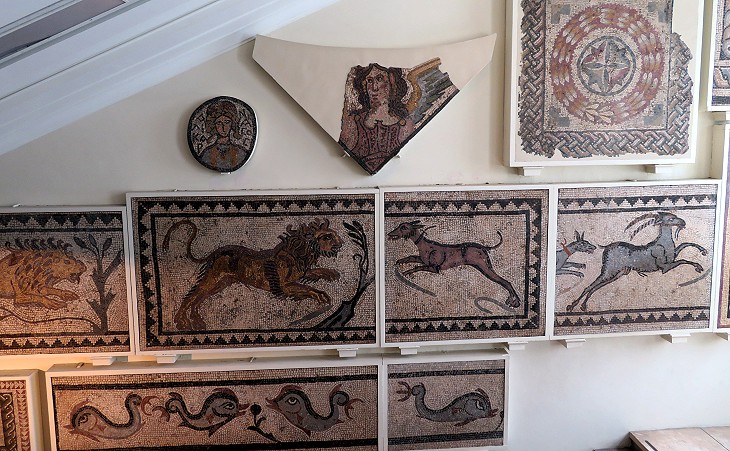 British Museum: floor mosaics from a Roman villa at Halicarnassus

In his search for the Mausoleum Newton discovered a Roman villa of the Vth century AD. Excavation campaigns in 1990-1993 have identified additional rooms with similar floor mosaics.