- Afrodisias
(detail of a relief which decorated the market square)

I came to a village called Geyra: This place is situated on the spot of the antient Aphrodisias. The walls are about two miles in compass, of an irregular triangular figure, the east side of the town being very narrow.
Richard Pococke - A Description of the East and Some Other Countries - 1745

(left) Aphrodite's Temple: (right) Byzantine relief in the section which was turned into a church

About a furlong to the north east, there are ruins of a most magnificent temple, which I conjectured was dedicated to Bacchus, from an inscription there mentioning a priest of Bacchus. (..) The walls of it are destroyed, and the stones were probably carried away to build the town walls; but there are two magnificent rows of fluted Ionic pillars of white marble, which are almost entire; there are nineteen on each side, four feet in diameter, and about five feet apart, each consisting of five stones. (..) The middle part of this temple had been converted into a church, there being a semicircular wall at the east end built in a different manner from the rest. Pococke
While the classic Greek myth was mainly based on male figures, in the Anatolian peninsula and in the islands next to it (such as Limnos), the prevailing myth was associated with female figures (Myrine/Cybele).
When this region was Hellenized the ancient goddesses were replaced by the female members of the Greek pantheon, chiefly by Artemis, who was worshipped in large sanctuaries at Ephesus and Sardis. In Afrodisias, a town of Caria, a region in the south-western corner of the Anatolian peninsula, the worship of the ancient goddesses was associated with that of Aphrodite (Venus to the Romans). 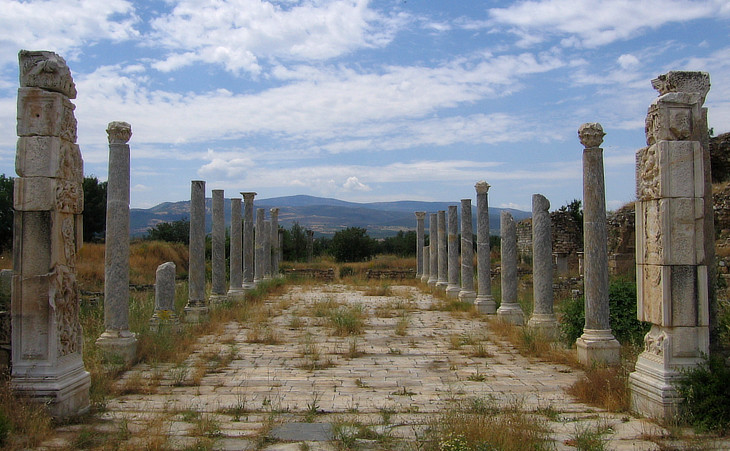 From the front there was a colonade of Corinthian pillars of grey marble, one foot six inches in diameter, but it could not correspond with the magnificence of the lofty temple. (..) It is probable that a row of pillars went all round at this distance; and I have great reason to think, that between these and the temple, there were continued colonades. Pococke
Afrodisias, as well as other towns with important sanctuaries, opposed the diffusion of the Christian faith. For this reason the Temple to Aphrodite was converted into a church. In order to physically show that the building was no longer a temple, its shape was modified by relocating the columns of the temple's portico along the existing side columns with the final result of obtaining a very long building having little resemblance to the old one.

Local museum: (left) statue of Aphrodite; (centre) details of a statue of a dancing woman; (right) Eros riding a dolphin, see a similar one in the Museum of Israel

Aphrodite is usually associated with paintings where the goddess is portrayed rising from the sea in a scallop shell, e.g. at Pompeii. She was regarded as the goddess of beauty and desire, but her statue at Afrodisias brings to mind those of the Ephesian Artemis.
The existence of marble quarries near Afrodisias led to the development of a school of sculptors whose works of art show excellent craftsmanship either in the virtuoso representation of legs beneath a dress or in the expressionistic portrayal of a dolphin. You may wish to see two statues by sculptors from Afrodisias which embellished Emperor Hadrian's villa near Tivoli.

The cult of Aphrodite had also some political aspects: the town flourished during the rule of Emperor Augustus at the initiative of Zoylos, a slave freed by the Emperor, who added to his name those of his former master (Gaius Julius, names of Caesar, which in turn the Emperor had added to his name when he had been adopted by Caesar). Caesar claimed to descend from Aeneas, son of Anchises and Venus, and he erected a temple to the goddess in Rome. In a way the embellishment of the monuments of Afrodisias was a sort of homage paid to the imperial family.
It is unclear who Zoylos was and how he achieved the wealth and the political role which allowed him to build theatres, temples and markets and to erect a monument to himself: maybe he was an important citizen of Afrodisias from the very beginning; he might have been captured by Cilician pirates and subsequently freed by Augustus: from the reliefs of his monument we know that he visited Rome.

In the middle of the city there is a small hill, in the side of which there was a theatre, now almost entirely ruined; there are remains of an arched entrance to it, about the middle of the north side, and of some arches at each end of it, on which the seats were probably built. The very summit of the hill seems to have been a fortress. Pococke
The theatre built by Zoylos was later on modified during the reign of Marcus Aurelius. Greek theatres had a circular orchestra where the chorus danced and sang; in the Roman theatres the orchestra was reduced to a semicircle. The seats reserved for the magistrates of the town'are clearly visible. The theatre seems to have been built on a natural slope, but excavations have shown that the mound behind it is the result of earlier human settlements.

A furlong to the north west there is a Circus, which is semicircular at both ends; it is entire within, had an entrance at each end, and consisted of twenty-five degrees of seats: The city wall is built against it, in which there are some very fine capitals of that sort of Corinthian order which was used in Caria. Pococke
The most impressive building of Afrodisias is undoubtedly its stadium, most likely used at a later time for chariot races. Unlike other similar buildings which made use of natural slopes, this stadium was built on flat land and its steps are entirely supported by a complex masonry structure (see a page on Roman construction techniques).

Stadium/circus: view from one of the entrances

Over the centuries the strong winds which characterize the entire region pushed so much earth against the barrier constituted by the stadium structures that the building almost disappeared under it. While its interior has been excavated, the external structures are still almost entirely underground.

In the walls of the city, towards the south west corner, there are some very fine reliefs, which seem to have been part of a frieze. Pococke
The masterpiece of the sculptors of Afrodisias is a long frieze (now in the gardens of the Archaeological Museum of Izmir - Smyrna) portraying all the Greek gods. The frieze decorated a portico dedicated to Emperor Tiberius in the agora/forum. The walls of the town were built/repaired with materials from its monuments. 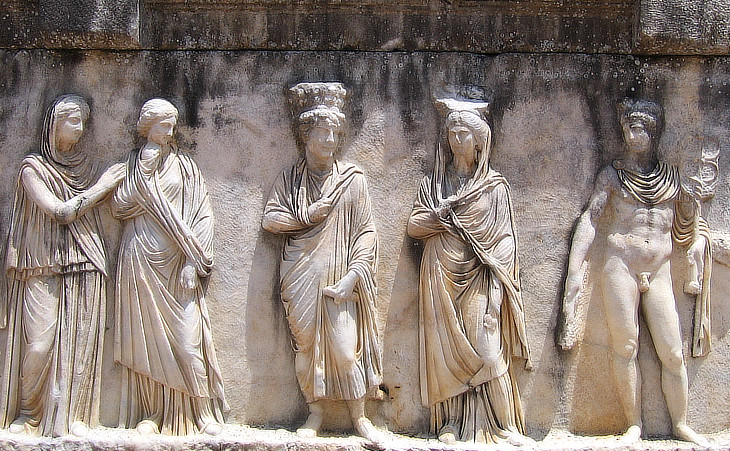 There are a great number of marble coffins in this place, some of which are fluted, others have figures of persons round them in mezzo relievo, with pilasters on each side; and there are inscriptions on some; two of them which are in the best taste, (..) have on one side two festoons of very excellent workmanship; in one they are supported in the middle by a naked person (see a similar sarcophagus); in another by a body wrapped up like an Egyptian mummy. Pococke
Most likely the sarcophagi seen by Pococke were made to be shipped to other parts of the Empire (see a page on the manufacturing and trade of sarcophagi).

Details of the baths

Afrodisias had large baths, both near the theatre and near the market square. They were huge buildings with large halls decorated with marbles and reliefs.

In addition to the theatre Afrodisias had also an odeon, a small covered theatre which could be used all year round and was particularly apt for musical performances. 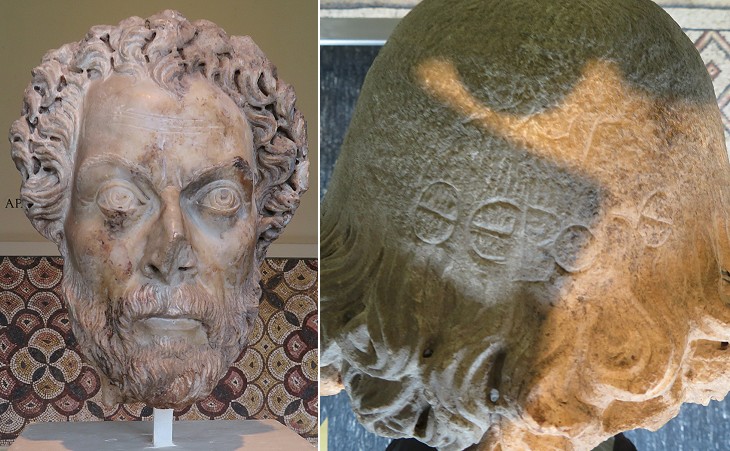 Brussels Art & History Museum: bust of a high imperial officer which was found at Afrodisias; it is dated ca 400 and the back of the head bears a Greek inscription saying "Christ, son of Mary, my God, save me"