- Volubilis: Houses
(detail of a mosaic from Volubilis at the Museum of Tangier)

You may wish to see an introductory page on this section or to Volubilis first. 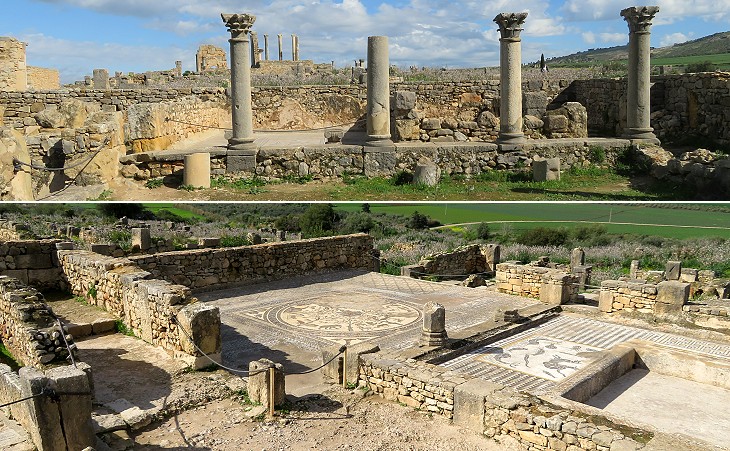 House of Orpheus: (above) small peristyle with Mosaic of the Dolphins; (below) Hall of the Mosaic of Orpheus and an adjoining basin

The initial campaigns carried out by French archaeologists were mainly aimed at freeing the monuments of the Forum from the rubble. A 1931 report to the Académie des Inscriptions et Belles-Lettres listed a number of findings which were related to inscriptions, statues and architectural elements, chiefly capitals. It did not mention any specific house or the existence of floor mosaics. The report indicated that the area south of the Forum was the first one to be investigated, in addition to the Forum itself. Later campaigns identified a large house which was named after a floor mosaic portraying Orpheus. 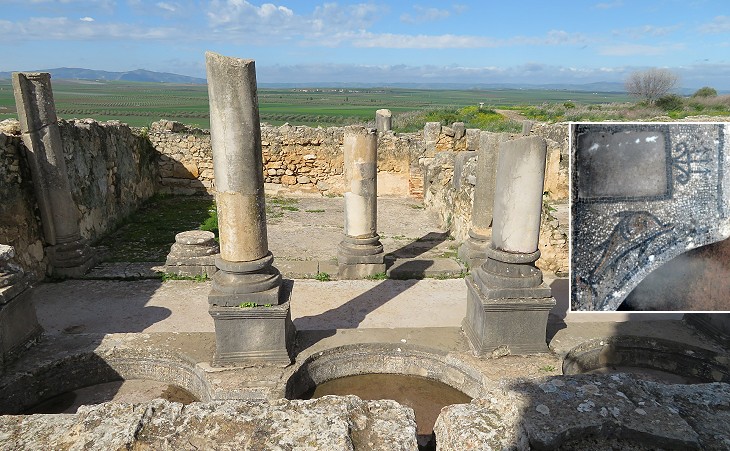 House of Orpheus: courtyard with a small nymphaeum (monumental fountain); (inset) detail of the decoration of the nymphaeum

The House of Orpheus has a complex layout which archaeologists believe is the result of having merged a group of small buildings to obtain a large and finely decorated residence, which however was not structured around a central peristyle. It received a direct supply of water from the aqueduct of the town for its fountains and its private baths. 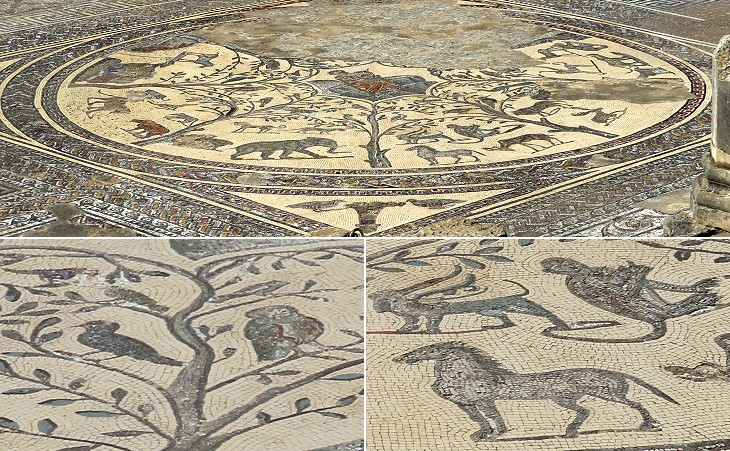 House of Orpheus: (above) Mosaic of Orpheus; (below) details

The myth of Orpheus taming the animals with his music was a popular subject for mosaics because it allowed the depiction of a variety of animals; in some cases this was done by placing them inside medallions (e.g. at Thysdrus), in other cases they were depicted in one scene (e.g. at Philippopolis). The mosaic maker who worked in this house developed a scheme of his own; in today's glossary of art terms the result could be defined as naïve art work. The mosaic embellished the triclinium (dining room) of the house. 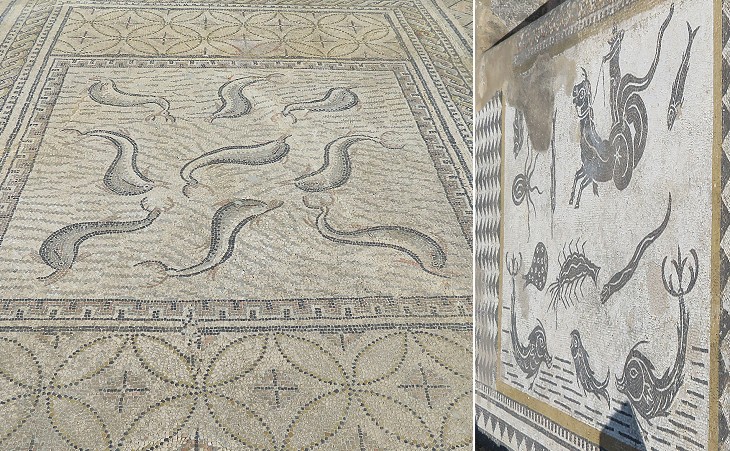 House of Orpheus: (left) Mosaic of the Dolphins; (right) another mosaic with sea creatures

Other mosaics show a different hand and style. The black and white mosaic depicting sea creatures is typical of the fashion prevailing in Rome, where these mosaics embellished many buildings, especially bath establishments at Ostia and Rome. 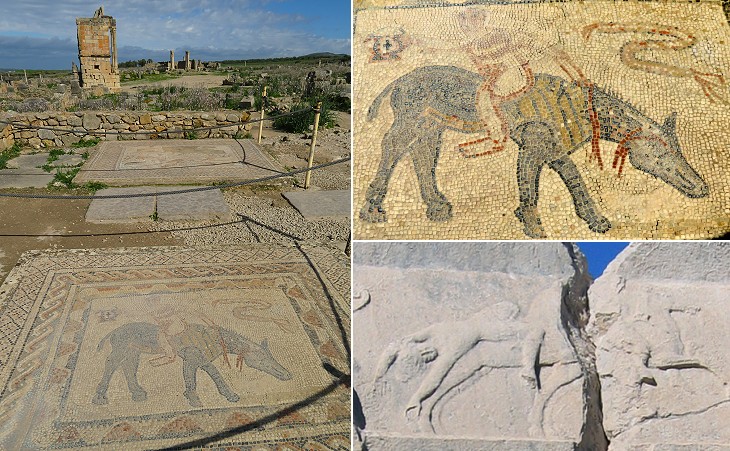 (left) House of Desultor near Arch of Caracalla; (right-above) detail of its main floor mosaic; (right-below) relief on a tomb at Xanthos showing other "desultores"

Desultores nominati quod olim, prout quisque ad finem cursus venerat, desiliebat et currebat; sive quod de equo in equum transiliebat. (Horsevaulters are so called because formerly as each one came to the end of the course he would leap down and run, or because he would vault across from one horse to another).
St. Isidore of Seville - Etymologiae (a sort of encyclopaedia of the early VIIth century) - Book XVIII - Cambridge University
While Orpheus was a very common subject for floor mosaic, the depiction of an acrobat is almost unique and the crude way it was done brings to mind drunken Silenus on his donkey, rather than a gymnast on a galloping horse. 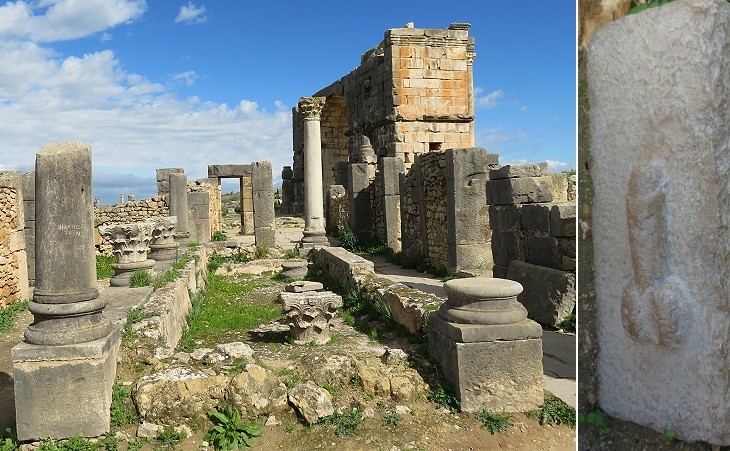 House of the Dog and apotropaic (turning away evil influences) relief on one of its stones (see a similar one at "Cuicul", today's Djemila in Algeria)

The name of the house derives from a bronze statue of a dog found in the peristyle. Its design is consistent with the traditional layout of a Roman house with all the rooms being accessed from the peristyle. The building included four small shops in the front of the house. 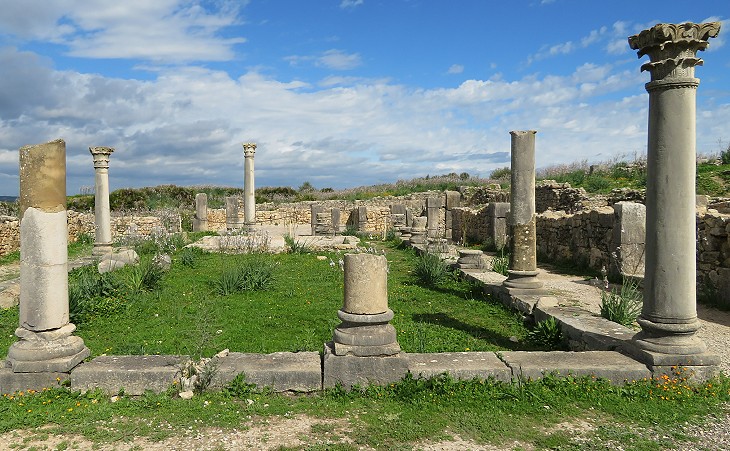 House of the Ephebe Crowned with Ivy

The house was named after a very fine bronze statue of an ephebe which testifies to the wealth and taste of its owners. It is structured around a very large peristyle. It included spaces for making/storing olive oil, the main economic resource of Volubilis. 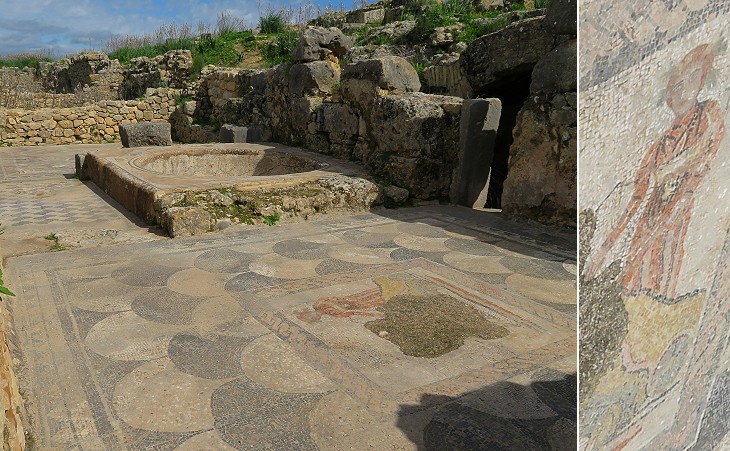 House of the Ephebe: (left) decorated basin and hall for entertaining guests; (right) detail of the floor mosaic portraying Dionysus/Bacchus on his chariot (see this subject in a mosaic in Spain)

It is likely that Volubilis had more cultural links with Hispania Baetica (Southern Spain) than with the Roman provinces in Algeria and Tunisia, notwithstanding the territorial continuity with them. A road linked the town with Tangier which had easy communication with Spain across the Strait of Gibraltar. The floor mosaics of Volubilis do not match the superior quality of those in the archaeological museums of Algiers, Tunis and Sousse. 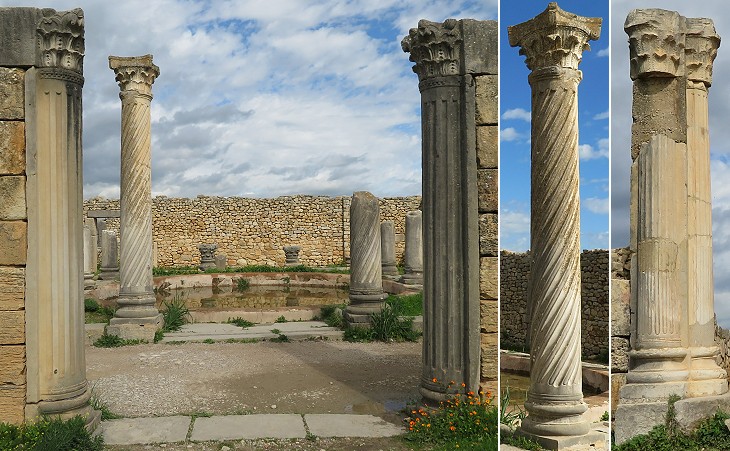 House of the Columns

Archaeological excavations of the area north of the Arch of Caracalla and along Decumanus Maximus began in 1941 and were completed by 1954. They showed that local artisans cut a local calcareous grey stone in such a way that they obtained results which are comparable with those achievable by using marble. This is particularly evident in this house which has some very fine columns and capitals. 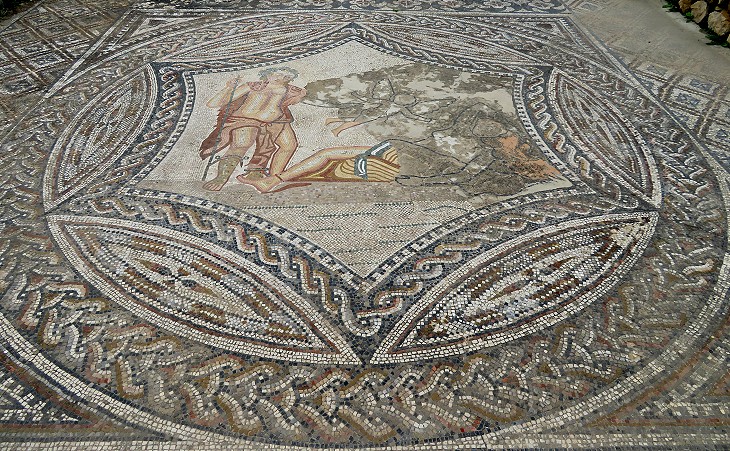 House of the Cavalier: mosaic portraying Dionysus/Bacchus and Ariadne

The name of this house comes from a bronze statue of a rider discovered in 1918 which you can see in the background of a page on the works of art of Volubilis in the museums of Morocco. One of its rooms is decorated with a floor mosaic where a complex geometric decoration frames a scene showing Dionysus/Bacchus coming across sleeping Ariadne at Naxos. The event was narrated by Ovid in The Metamorphoses - Book VIII - translation by A. S. Kline.
When, through the help of the virgin princess, Ariadne, by rewinding the thread, Theseus, son of Aegeus, won his way back to the elusive threshold, that no one had previously regained, he immediately set sail for Dia (Naxos), stealing the daughter of Minos away with him, then cruelly abandoned his companion on that shore. Deserted and weeping bitterly, as she was, Bacchus-Liber brought her help and comfort. 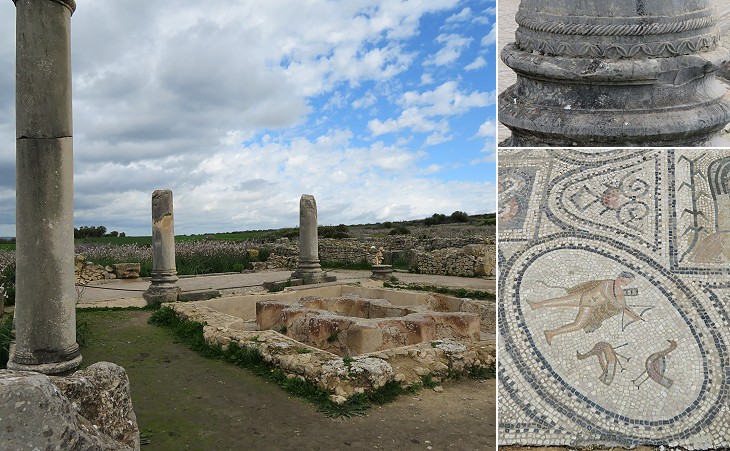 House of the Labours of Hercules: (left) peristyle with basin; (right-above) plinth of a column; (right-below) detail of a mosaic depicting the Sixth Labour of Hercules i.e. the killing of the Stymphalian birds

This was one of the largest houses of Volubilis with some forty rooms and fine architectural features. The landlord however chose a rather unskilled artisan for the floor mosaic of one of the main halls (you may wish to see fragments of a floor mosaic from Zeugma in Turkey depicting in a much livelier way two other labours). The Labours of Hercules very often decorated Roman sarcophagi and they eventually became a popular subject for Renaissance frescoes. 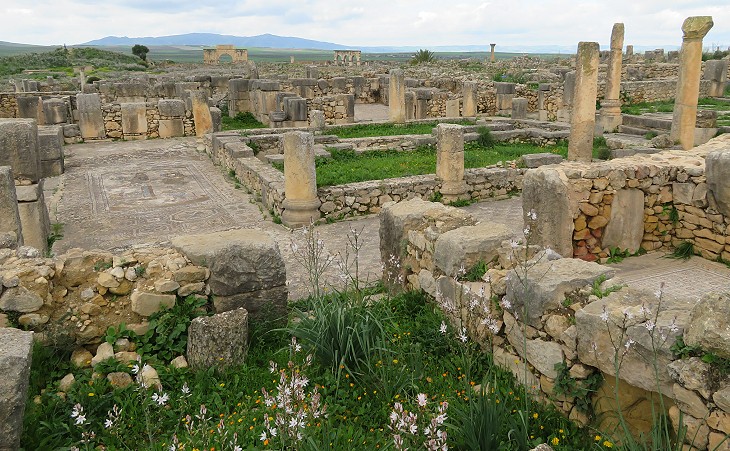 House of the Voyage of Venus: the image used as background for this page shows one of its geometric mosaics

This house is situated on a street parallel to Decumanus Maximus and it is named after a large mosaic in its dining room which depicts Venus on a ship accompanied by the Three Graces and escorted by nymphs riding sea horses (a detail is shown in the icon of this section). It is a very complex scene which cannot be seen elsewhere at Volubilis. The rationale behind the decision to place it in a museum is perfectly understandable, less so that the choice fell on the Museum of the Kasbah of Tangier, rather than on that of Rabat which already housed many works of art from Volubilis. 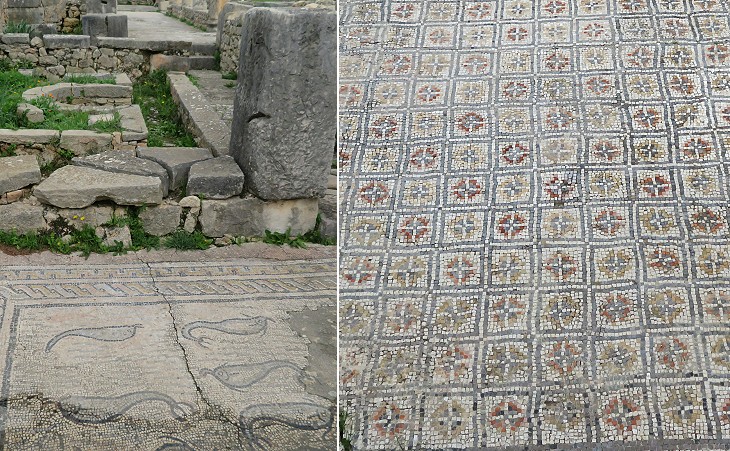 House of the Voyage of Venus: (left) a detail with a mosaic similar to that at the House of Orpheus; (right) geometric mosaic

The house was built in the IInd half of the Ist century, but the mosaics are dated late IInd century. In addition to mosaics the house was embellished with works of art which included a fine bronze bust portraying Cato the Younger. This bust suggests that the landlord belonged to an important Roman family because Cato was regarded as a symbol of Republican high moral standards and incorruptible virtue. 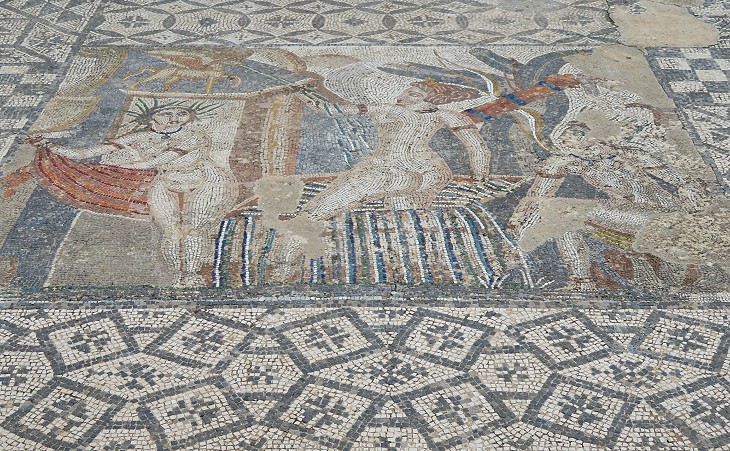 House of the Voyage of Venus: mosaic depicting Diana surprised at her bath by Actaeon

Other mosaics confirm that the landlord was very familiar with the Greek/Roman culture. Actaeon is portrayed with horns beginning to sprout from his head as he is transformed by the angry goddess into a stag, before being chased down and killed by his own hunting dogs as described by Ovid. The scene is depicted in a more vivid way in a mosaic found at Philippopolis in Syria, but also the mosaic of this house is well executed and has a rich palette. The killing of Actaeon became a popular subject for the decoration of Renaissance palaces, e.g. Villa della Farnesina in Rome and XVIIIth century countryside royal palaces, e.g. la Granja near Segovia and Caserta near Naples. 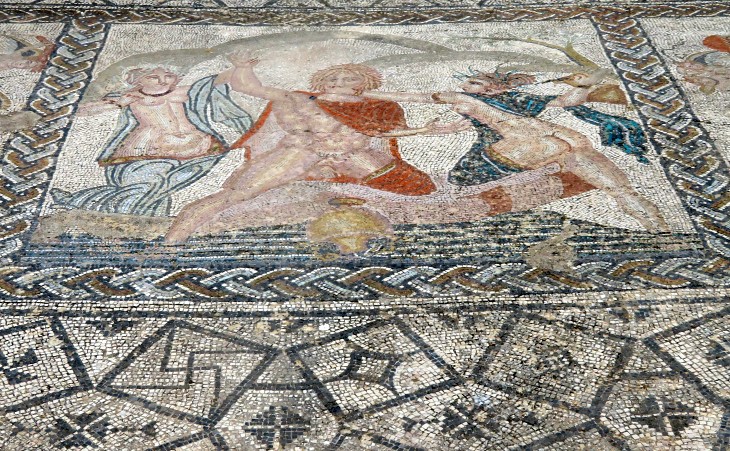 House of the Voyage of Venus: Abduction of Hylas by the nymphs of a lake

It is likely that this mosaic was made by the same person who worked at the other two large mosaics of the house. The subject is less known than that of Actaeon and refers to an episode occurred to Hylas, a young friend of Hercules. Hylas wears a red cloak as he does in mosaics at Italica and Vienne and in a famous opus sectile in Rome. It is generally assumed that drawings were circulated among teams of mosaic makers. 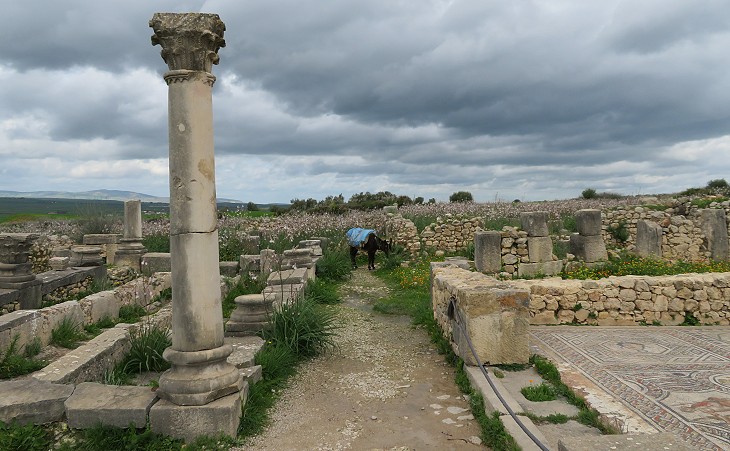 Volubilis, also thanks to the surrounding countryside, is a very evocative archaeological site and in 1997 it was included by UNESCO in their World Heritage List. Roman floor mosaics, apart from their artistic value, are interesting since they show how sound were the techniques for laying them down. They withstood the ravages of time because they were covered by the rubble of the buildings they decorated, but they may not withstand the effects of creeping plants much longer. 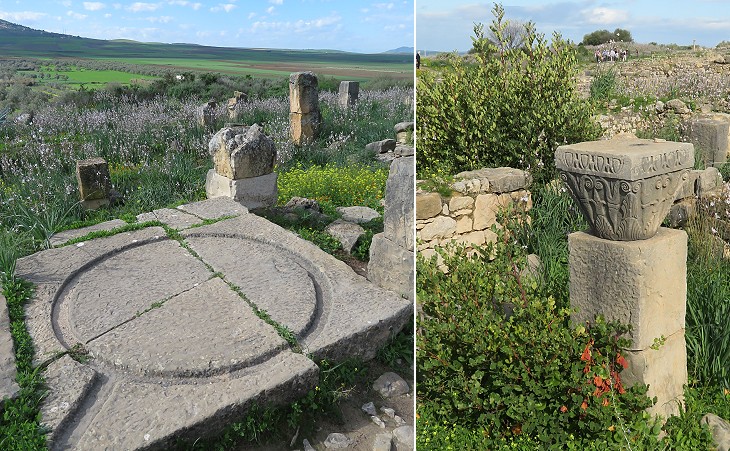 Return to the page on the main monuments of Volubilis or move to that showing its works of art in the Museums of Morocco.