You may wish to see an introduction to this section or page one first.

Roman street next to the southern market

The construction techniques used by the Romans in building their streets have proved to be very effective.

Several piers of a mean aquaduct are standing.
Richard Chandler - An account of a tour made at the expense of the Society of dilettanti - 1775
The southern market was flanked by warehouses and granaries. The Romans took care also of some minor, but necessary facilities. An aqueduct provided Miletus with an ample supply of water; the town had sewers carrying drainage water to the sea.

In the IIIrd century the belief in the traditional gods weakened. Emperor Heliogabalus promoted the worship of Sol Invictus (Invincible Sun). Although his attempt to impose this new religion did not succeed, the worship of Sun (which had almost no relevance in the Greek myth) was very popular for the whole century.
In a temple of Miletus built during that period Serapis, a deity with elements of both Greek Zeus and Egyptian Osiris, was portrayed crowned by sun rays. This iconography was not limited to Serapis (see a relief in Rome) and it is at the origin of the halo which surrounds the head of the saints.

Miletus had several baths; the largest ones were built by Emperor Antoninus Pius and dedicated to his late wife Annia Faustina. See the temple in Rome he dedicated to her.

Baths of Annia Faustina: views of the frigidarium (cold room)

In the frigidarium bathers could swim (or just stand) in a low pool. Water was continuously replaced; it spouted from the mouth of a marble lion.

Bathers left their clothes in changing rooms aligned along the walls of a very large hall. They then warmed up by doing some light exercising in that same hall. You may wish to see a page showing images of Terme di Caracalla in Rome with excerpts from Seneca describing what went on in a Roman bath establishment.

Ruins of the western market

Miletus afterwards fell so low as to furnish a proverbial saying, "The Milesians were once great but if we compare its antient glory, and that its subsequent humiliation, with its present state, we may justly exclaim, Miletus, how much lower art thou now fallen!" Chandler 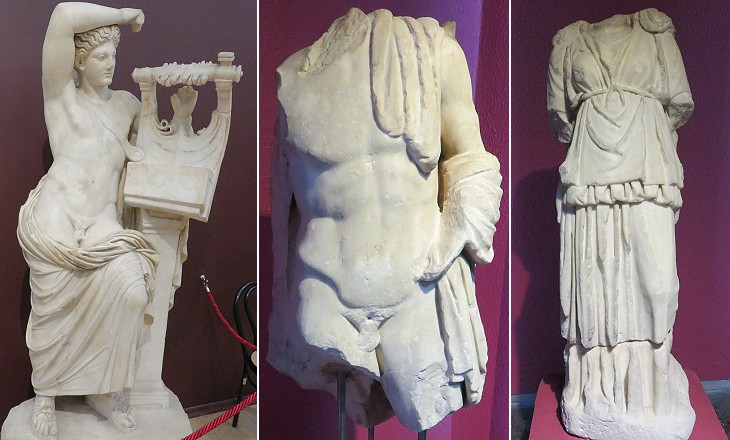 The finest works of art found at Miletus were moved to major museums in Turkey (Istanbul and Izmir) and to Berlin.

Other works of art are displayed in the small museum of the archaeological area; those shown above are scattered in a sort of open air exhibition along the (modern) road leading to the theatre.

From the number of forsaken mosques, it is evident, that Mahometanism has flourihed in its turn at Miletus. All these have been mean buildings and mere patch-work; but one, a noble and beautiful structure of marble, is in use, and the dome, with a tall palm-tree or two, towers amid the ruins and some low flat roofed cottages, inhabited by a very few Turkish families, the present citizens of Miletus. Chandler
Here I pitched my tent: before me stood a fine mosque, built of the ruins of Christian churches; but (..) the stork alone occupied its ruined walls.
Charles Fellows - Journal Written during an Excursion in Asia Minor in 1838
The decline of Miletus was briefly interrupted in the early XVth century. The Mentese, Muslim rulers of a small state which was eventually conquered by the Ottomans in 1426, tried to revive the town by reactivating one of its ports. The fine mosque shown above belongs to that period.

For more fine mosques of the XIVth century see a page on those of Bursa. For other stork nests go to Silifke or Karaman.

Friends you can meet in Miletus

The image used as background for this page shows a detail of the monument to Pompey.