You may wish to see an introduction to this section first.
The river Xanthus lies to the north of Patara, (..) and its valley has not been explored by Europeans. I have determined to seek a route to Macry up this valley, instead of by sea or across the range of Cragus. (..) We started to see the ruins of the city of Xanthus, which lay at about two miles' distance, upon or overhanging the river of that name. We had no sooner entered the place of tombs, than objects of such high interest to the antiquarian, sculptor, and artist appeared, that I determined to pitch my tent here for the night.
Charles Fellows - Journal Written during an Excursion in Asia Minor in 1838 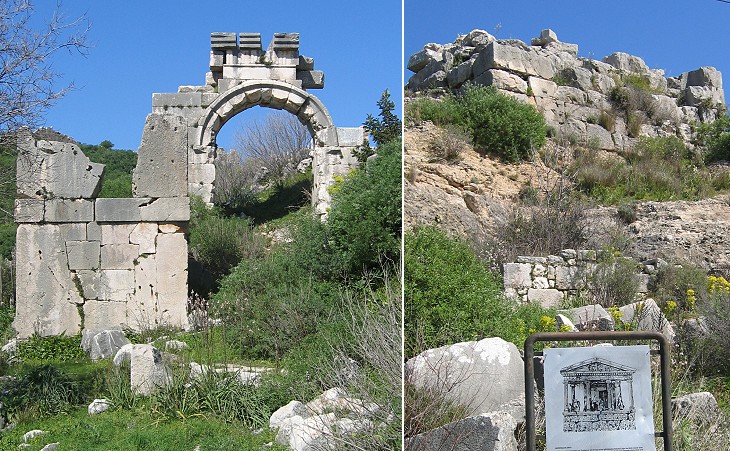 (left) Foreground: ruin of the city gate built in 197-190 BC by Antiochus III; background: arch celebrating Emperor Vespasian; (right) site of the Nereid Monument near the gate

The entrance to Xanthos is marked by two monuments which represent two phases of its history:
a) its conquest by Alexander the Great and then its being included in the kingdom founded by Seleucus, one of Alexander's generals: Antiochus III, the last of his heirs to rule on Lycia, built the main city gate;
b) the long period of Roman rule; at first Xanthos was assigned to the King of Pergamum, an ally of the Romans; when in 133 BC Attalus III, its last king, bequeathed his possessions to Rome, Xanthos became part of the Roman province of Asia. It enjoyed a period of great prosperity in the Ist and IInd centuries AD as the arch built in honour of Emperor Vespasian proves.
The gate, in addition to being the main entrance to Xanthos, was the starting point of a sacred road leading to Letoon, the site of the most important sanctuary of Lycia. The Nereid Monument was located very near the gate. 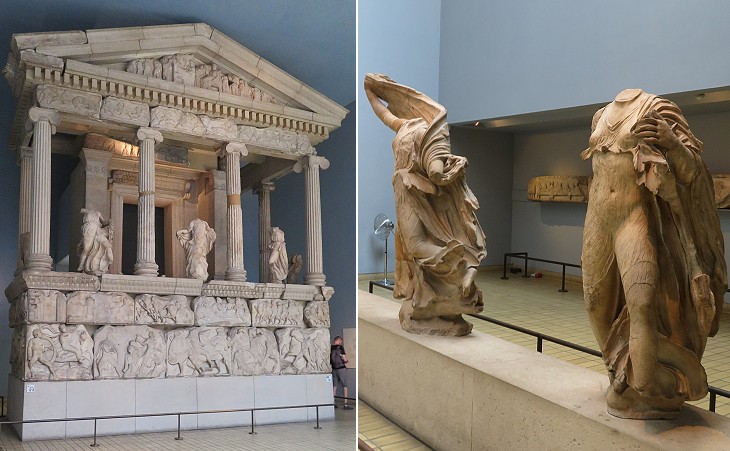 British Museum: (left) partial reconstruction of the Nereid Monument (Tomb of Arbinas ca 370 BC): (right) other statues of Nereids

On the site of a temple of rather small dimensions lay a pretty frieze, about ten or twelve feet long and one in width, representing a series of small dancing figures with flying drapery; not less than fifteen of these were remaining. This temple, standing upon the brow of a hill, and six or seven others which may still be traced along the same cliff, must have produced an exquisitely beautiful effect. Fellows
In 1839 British archaeologist Sir Charles Fellows published A Journal written during an Excursion in Asia Minor in 1838, an account of his explorations of the River Xanthos valley where he discovered the ruins of Xanthos and Tlos. In 1840 he returned to Lycia and wrote again about his findings at Xanthos.
Fellow's books attracted the attention of the British Government and of the British Museum; the Sultan was asked permission to ship to England some of the works of art of Xanthos. In 1842 a tomb shaped in the form of a small Ionic temple was carried away and reconstructed in the British Museum. It was decorated with statues of the Nereids (sea nymphs who helped sailors). 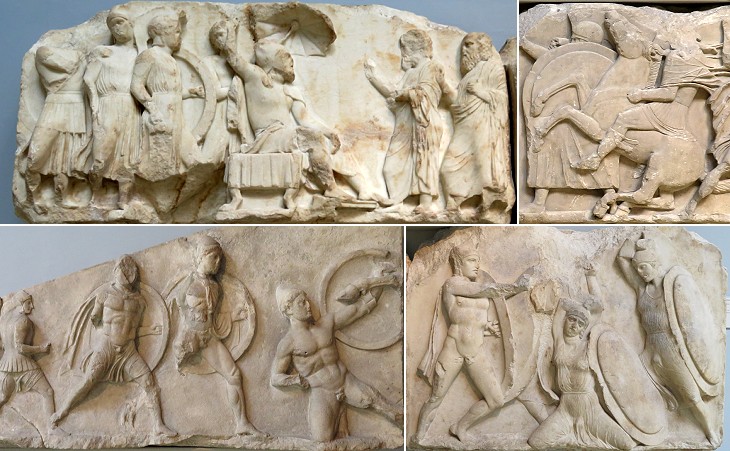 Eventually the monument was identified as the tomb of Arbinas, satrap (Persian governor) of the region. The reliefs which decorate the building mainly show traditional scenes of combats, but in one of them Arbinas is portrayed seated under a parasol while receiving dignitaries, a depiction which is very similar to those which can be seen in the palaces of Persepolis. 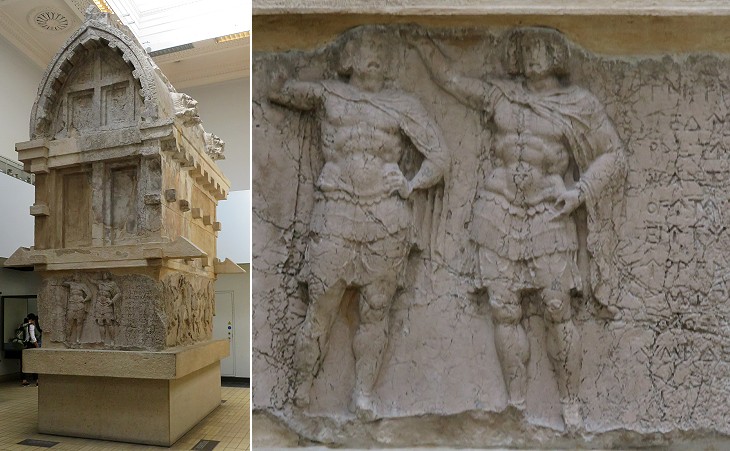 British Museum: (left) Tomb of Payava; (right) relief and adjoining inscription making reference to Payava who may be one of the commanders shown in the relief

I have attempted a sketch of the most beautiful of the tombs, and I add the description by pen to make my drawing more intelligible. It is a sarcophagus, entirely of white marble, standing on the side of a hill rich with wild shrubs, the distant mountains, of the silvery grey peculiar to marble rocks, forming the background. Being finely worked, the polish has greatly assisted in its preservation from the effect of the atmosphere. The roof is somewhat grey, and the fractures of the lower parts are tinged with the shade of red which white marble assumes after long exposure to the weather, and in places with yellow blended with brown. On the top, or hog's-mane, is a hunting scene. (..) On each of the sloping sides of the roof are two stones projecting about a foot, as found on all these tombs, but which upon this are carved into lions' heads crouching on their paws. (..) At the end, on a larger scale, are two figures of warriors, clothed only with girdles of armour round their loins, and petticoats reaching nearly down to their knees, resembling the figures of the ancient Britons. The background on the same stone contains a long, but, from mutilation, partially illegible inscription. Fellows
Apart from a reference in an inscription we do not know anything about Payava. He might have been the successor of Arbinas and the tomb is dated ca 360 BC.

Rock-cut tombs and a pillar tomb

The beautiful tombs in the rocks, (..) are also of a very early date. They are wholly cut into, or formed by cutting away, the rock, leaving the tombs standing like works of sculpture. Fellows
Xanthos has only a few rock-cut tombs which are located at the top of a hill opposite the theatre; these are among the oldest tombs of this kind; unlike the later examples of Kaunos and Telmessos they were not shaped like a small temple.

Rome and most of the cities of the Ancient World had rules which limited the construction of funerary monuments inside the city walls. Lycians held a different opinion on this matter and the wealthiest citizens were allowed to build their monuments right in the centre of the city market. In Xanthos two monuments which stand between the theatre and the agorà have become the landmark of the archaeological site.

British Museum: relief from the "Harpy Tomb" showing a man seated on a throne with a young warrior standing facing him. At either side Harpies carrying off souls

Upon another tomb, or high square pedestal, near the theatre at Xanthus, are some curious bas-reliefs. (..) On the north and south sides are four figures of similar design; the head is that of a female with the Greek cap and hair, the breast is exposed, and the body, which terminates with the trunk, has wings and a tail like a pigeon's; from under the wings comes a bird's claw, clasping the legs of a child which is carried in the bosom of the figure; (..) in the middle of the north side is an old man, with a peculiarly pointed beard, seated on a stool, under which is a pig; he has loose drapery, and a stick resting against his shoulder and held in his hand: before him is the figure of a warrior delivering up his armour; in one hand he holds the helmet, in the other a mantle. Fellows
One of the tomb is named after its reliefs. Harpies were winged death-spirits; since souls were believed to fly off in the form of birds, Harpies were pictured as birds of prey waiting to catch and secure them.

The seats of the people in most of the Greek theatres were so formed as to throw off the rain-water, and at the same time in some degree to prevent the inconvenience from the feet of the spectators seated above.
Charles Fellows - An account of discoveries in Lycia - 1841
The current theatre was built in the IInd century AD, most likely on the same site of a smaller theatre which was cut into the rock. The new theatre was supported by thick walls and two archways facilitated the access of the audience. Only the upper rows of seats are missing as they were used at a later time to build defensive walls.

The ruins are wholly of temples, tombs, triumphal arches, walls, and a theatre. (..) The language of the innumerable and very perfect inscriptions is like the Phoenician or Etruscan. Fellows
A colonnaded street crossed the whole market area; in this part of Xanthos there are some pedestals which supported statues and a tall pillar tomb with a very long inscription in the language of the Lycians (which has yet to be fully understood).

The many tombs of Xanthos have different shapes, although those having a "Gothic" lid are the most frequent ones.

The site is extremely romantic, upon beautiful hills; some crowned with rocks, others rising perpendicularly from the river, which is seen winding its way down from the woody uplands, while beyond in the extreme distance are the snowy mountains in which it rises. Fellows
The archaeological area of Xanthos is divided by a local road: its eastern part is still being excavated: it shows evidence of the Byzantine period: a large basilica with mosaics was built on the site of an earlier Roman temple.

Although the finest works of art of Xanthos have been moved elsewhere, yet there are still some very elaborate reliefs which deserve being admired, such as that shown in the background of this page. 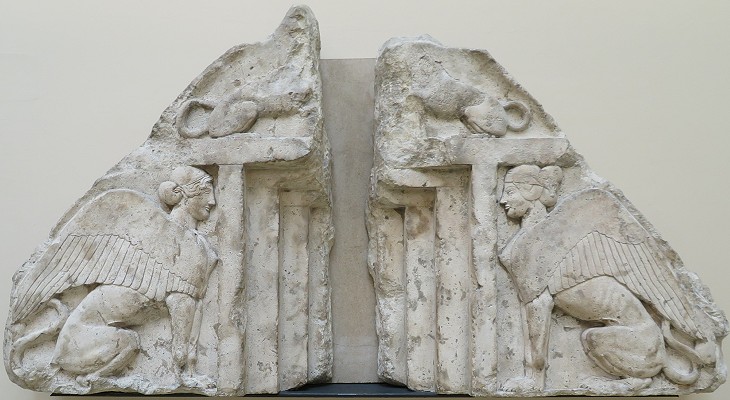 The sphinx represented throughout this country is the eastern, and not that seen in the Egyptian sculptures. Fellows