The gardens round the town are beautiful; the trees were loaded with fruit; all kinds of vegetation seemed to be exuberant (..). Alternate breezes refresh the air in a remarkable manner (..). Upon the whole, it would be difficult to select a more charming spot for a city.
Francis Beaufort, Captain of HMS Frederikssteen, a frigate of 32 guns: Karamania; or a brief description of the South Coast of Asia Minor, and of the Remains of Antiquity collected during a survey of that coast, under the orders of the Lords Commissioners of the Admiralty, in the years 1811 & 1812 - Published in 1817
Adalia I prefer to any Turkish town that I have yet visited; every house has its garden, and consequently the town has the appearance of a wood, and of what? orange, lemon, fig, vine, and mulberry, all cultivated with the artificial care of a town garden, and now in fresh spring beauty.
Charles Fellows - Journal Written during an Excursion in Asia Minor in 1838
In the last decades Antalya and its region (which is still known by its ancient name of Pamphylia) have become for European pensioners what Florida is for American ones. A very mild and sunny climate even in winter and a cost of living well below that of the Eurozone have attracted many retired people, especially from Germany, who have contributed to the economic growth of the area. 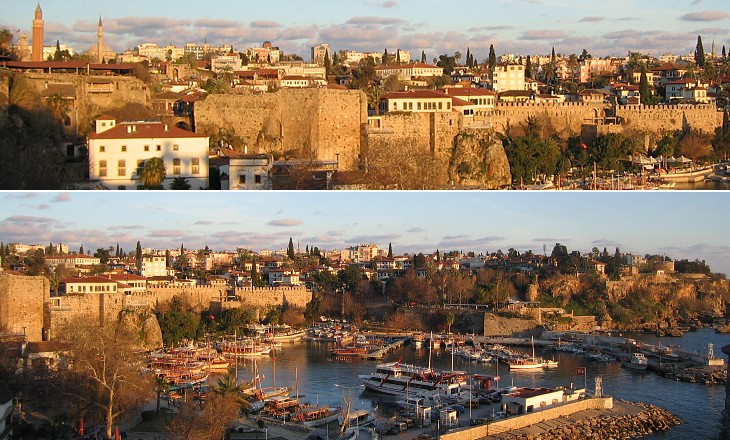 Views of "Kaleici", the old town within the walls, and of its harbour

Adalia is beautifully situated round a small harbour; the streets appear to rise behind each other like the seats of a theatre (..). From the ship we perceived five lofty minarets, one of which is fluted from the base up to the gallery that surrounds the head of the shaft. F. Beaufort
Today Kaleici is almost entirely occupied by small hotels, restaurants, shops and hammams for tourists. It has become a very minor portion of modern Antalya. 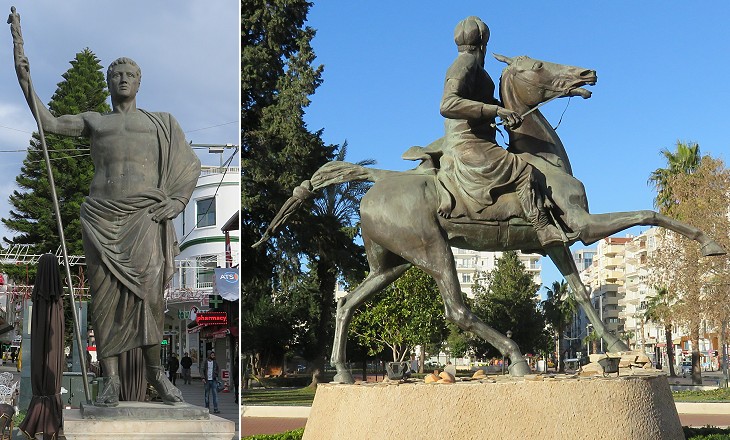 Modern statues to Attalus II, King of Pergamum (left) and Seljuk Sultan Kaykhusraw I (right) who seized the town in 1207

Pamphylia means "land of all tribes", an indication that it was populated by settlers of Greek origin as well as by clans coming from the Anatolian tableland. In 188 BC Attalus II acquired control over the region. Side, the main port in the eastern part of the region was far from his other possessions. He therefore founded Attalia or Attaleia at the westernmost point of the coast of Pamphylia. In 133 BC Attalus III, the last king of Pergamum bequeathed all his possessions, including Antalya, to the Romans. 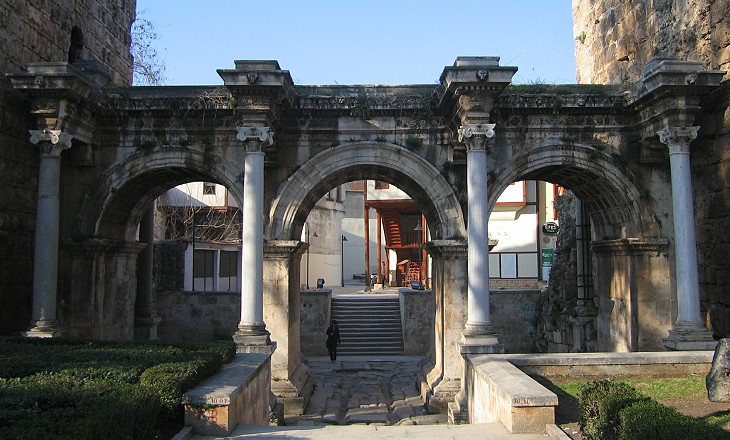 In one part of the surrounding wall, we observed that there had been an opening between two of the towers; it is now walled up, but appears to have been once a splendid gateway. There are still the remains of fourteen columns (..). Four of larger dimensions stand in a line with the outer face of the towers. F. Beaufort
A triumphal arch was built in honour of Emperor Hadrian to celebrate his visit to Antalya in 130 AD. Later on the arch was incorporated into the city walls and became known as Uçkapilar (three gates). The access to the town was protected by two high towers and walls (now removed) were built above the arch. 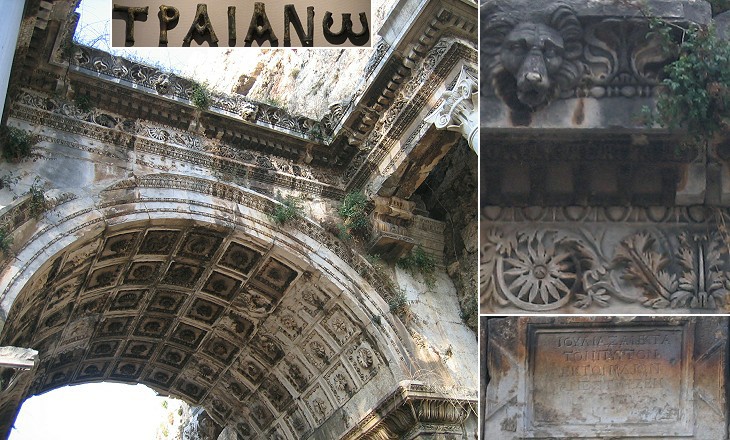 Details of the northern arch and inscription on the left tower by Julia Sancta, a local wealthy lady who financed the construction of the arch; (inset) Ashmolean Museum of Oxford: gilded bronze Greek letters of the inscription on the arch which make reference to Emperor Trajan, Hadrian's adoptive father who was always mentioned in inscriptions celebrating Hadrian

Hadrian dramatically increased government spending outside Italy. (..) Hadrian's travels all over the empire, although they made him unique among peacetime rulers, probably created burdens as well as benefits.
Richard Duncan-Jones - Money and Government in the Roman Empire - Cambridge University Press - 1994
Not all the public facilities bearing Hadrian's name were actually built with government money. Many of them were paid for by town councils or wealthy donors.
The current monument is the result of a reconstruction made in the 1950s: the modern parts of the arch were built by using a stone which has a slightly different colour than the old one; the columns in front of the gate are new. The northern arch is almost entirely original and it shows a very elaborate decoration, typical of the prevailing taste at the time of Hadrian. 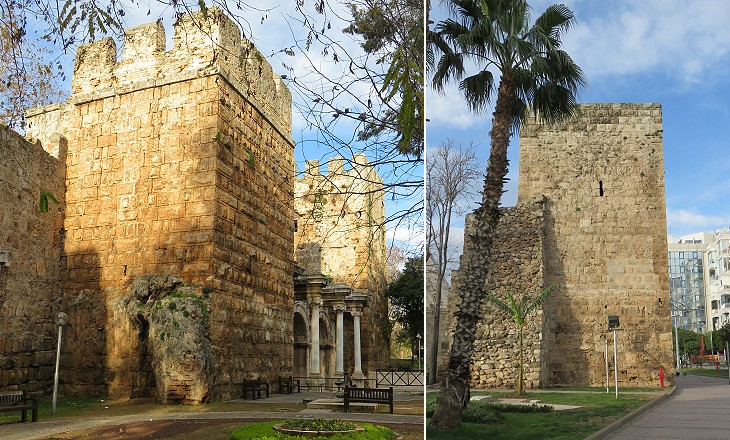 Antalya was protected by walls which were initially built at the time of its foundation. Those we see today are the result of a series of reconstructions/modifications which began in the late IIIrd century AD and ended in the late XVth century. The walls do not appear to have been redesigned to cope with cannon warfare, apart from some improvements made to those protecting the harbour. 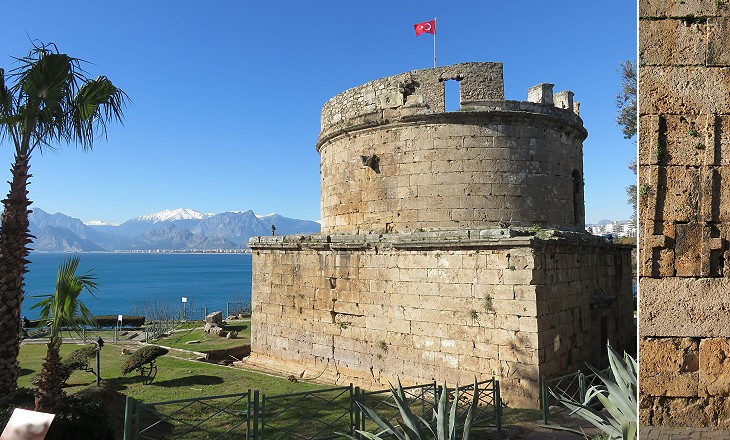 Originally Hidirlik Kulesi was the Roman lighthouse of Antalya: it was located on a cliff at the south of the harbour: it may have been built as a mausoleum. Near the entrance there is a decoration which could represent fasces, a symbol of authority in Ancient Rome. Hidirlik Kulesi was turned into a bastion from which cannon could hit enemy ships trying to approach the harbour, most likely after 1472 when the Venetians raided the town. 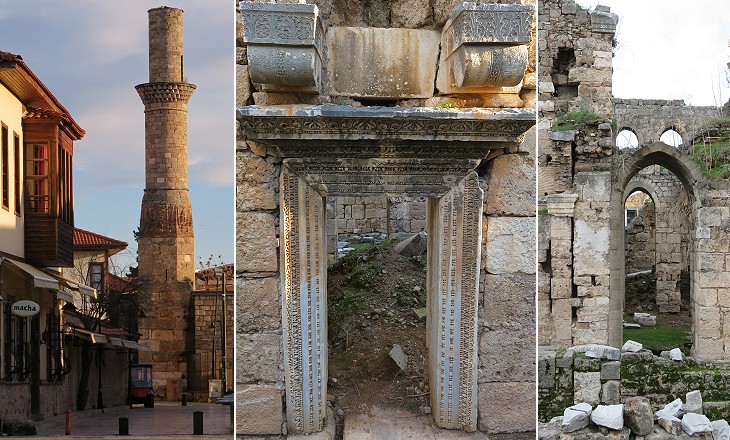 The church/mosque, which today is called Kesik Minare after its truncated minaret, provides a summary of Antalya's history. It was built in the Vth century as a church dedicated to Mary: columns and lintels from a Roman temple were used in its construction. 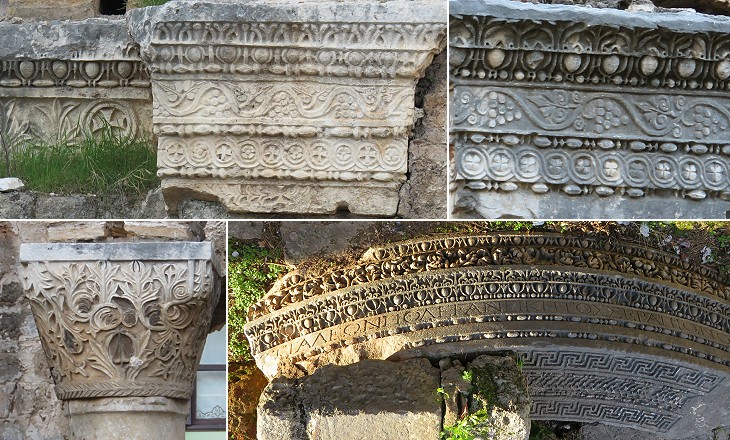 Kesik Minare: (above and below-left) Byzantine lintels and a Byzantine capital: (below-right) round lintel from a Roman building (the photo is rotated 180 degrees to help reading the inscription which includes the word "aneiktos", most likely in this case used as the equivalent of Latin "invictus", unvanquished)

In 1085, when the town was occupied by the Seljuks, the church was turned into a mosque. The building returned to be a church when Antalya became an important Christian base supporting the Crusaders en route to the Levant. The Seljuks reconquered it in the early XIIIth century, but in 1361 Peter I, King of Cyprus seized the town and the building was again turned into a church for a short period. The mosque was damaged by fire in the XIXth century and it was not rebuilt. 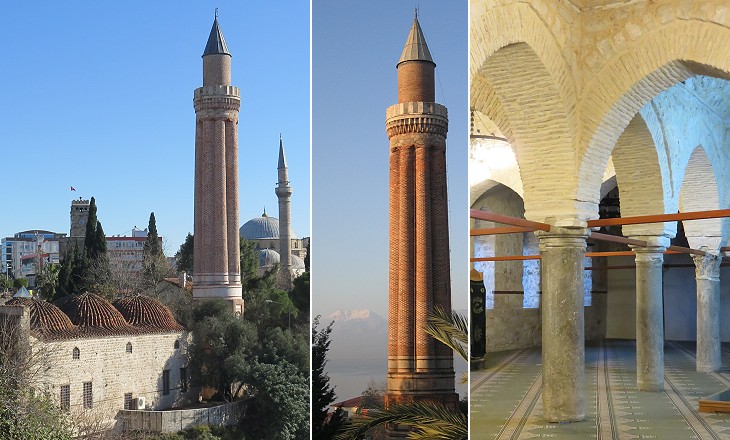 Yivli Minaret stands on the highest point of the land walls and it was built by Sultan Kaykhusraw I soon after conquering the town. It was at the same time a symbol that Antalya had become a Muslim possession and an excellent observation point to detect enemies arriving by land or by sea. Fluted minarets can be seen in many towns which were part of the Seljuk Sultanate of Rum (e.g. Sivas). 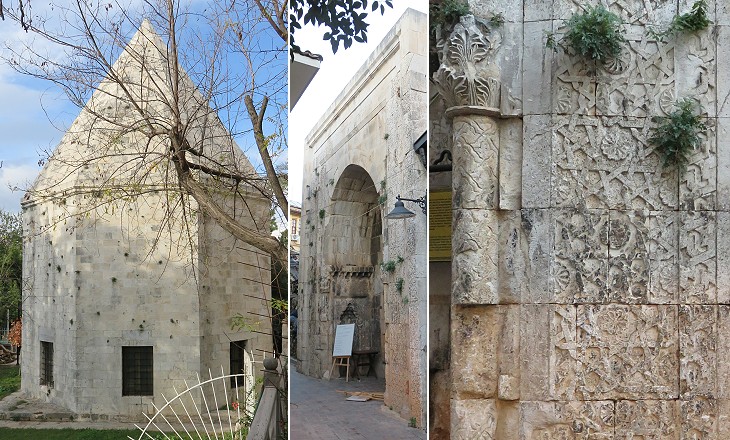 (left) Seljuk mausoleum of the kumbet type; (centre/right) Karatay Medrese (1251) and details of its portal

Ibn Battuta, whose travel accounts through most of the Muslim countries are an invaluable source of information for historians, visited Antalya in 1330 or 1332, when it was a Seljuk possession: From Alaya I went to Adalia, a most beautiful city. It covers an immense area, and though of vast bulk is one of the most attractive towns to be seen anywhere, besides being exceedingly populous and well laid out. Each section of the inhabitants lives in a separate quarter. The Christian merchants live in a quarter of the town known as the Mina (the Port), and are surrounded by a wall, the gates of which are shut upon them from without at night and during the Friday service. The Greeks, who were its former inhabitants, live by themselves in another quarter, the Jews in another, and the king and his court in another, each of these quarters being walled off likewise. The rest of the Muslims live in the main city. Round the whole town and all the quarters mentioned there is another great wall. The town contains orchards and produces fine fruits, including an admirable kind of apricot, called by them Qamar ad-Din, which has a sweet almond in its kernel. Translation by H.A.R. Gibb 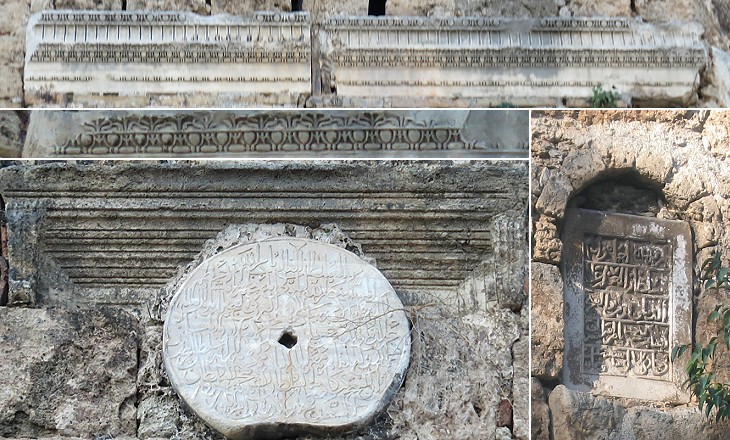 Ancient stones reutilized by the Seljuks for decorations and inscriptions

It is not unusual to find Islamic inscriptions in the form of a medallion on the walls of towns in the Levant (e.g. Damascus). They were made by cutting broken columns into slices which were then carved. Other inscriptions were written on the back of ancient gravestones. 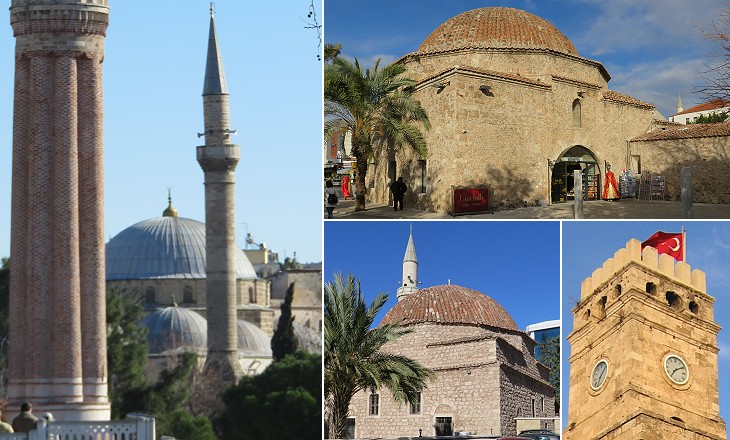 In the early XVth century Antalya became an Ottoman possession, but its mainly Seljuk character was not modified by major additions. You may wish to see Antalya in a ca 1683 etching by Cornelis de Bruijn (it opens in another window). At that time it was known as Sattalia in Europe. 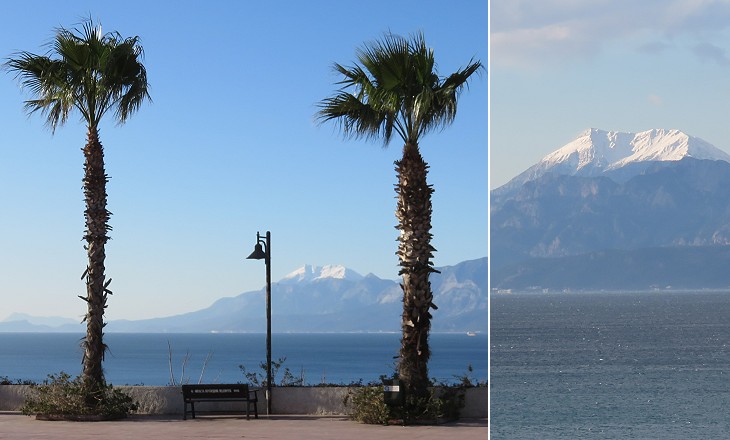 The image used as background for this page shows a detail of Yivli Minaret.
Move to the Archaeological Museum of Antalya.