I pitched my tent amidst the ruins of Perge; near me was a small encampment of shepherds, who had brought their cattle to pasture amidst the ruins. The first object that strikes the traveller on arriving here is the extreme beauty of the situation of the ancient town, lying between and upon the sides of two hills, with an extensive valley in front, watered by the river Cestrus and backed by the mountains of the Taurus.
Charles Fellows - Journal Written during an Excursion in Asia Minor in 1838 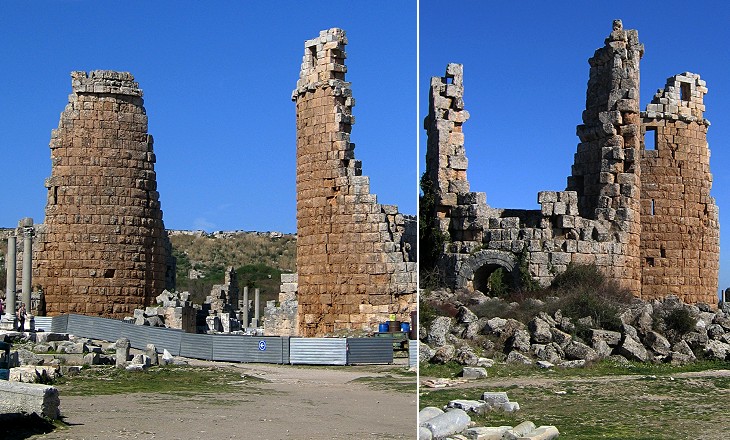 Hellenistic Gate, also in the image used as background for this page

The ancient town of Perge was located on the right bank of the River Kestros (today known as Aksu) a few miles from its mouth. Small ships could reach the town directly from the sea. The first settlement was founded on a hill, but the town expanded into the plain where its main monuments were built.
The main gate of Perge was protected by two round towers; they were built before the town became a Roman possession (188 BC). Later on with the expansion of Perge the towers lost their defensive purpose, but due to the elegance of their design they were retained and turned into a triumphal entrance to a long colonnaded street which crossed the town. 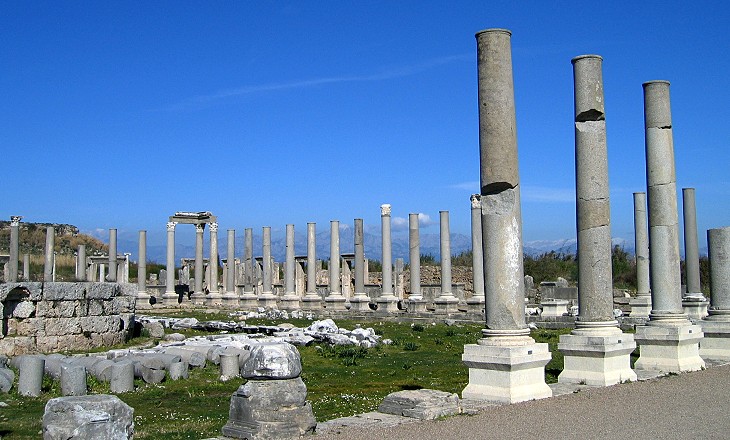 A large agora/forum lay to the east of the gate. It had an almost square shape with a tholos (round building) at its centre, similar to the agora of Side. In both agoras (and at Smyrna), grey granite and white marble were used for building the porticoes which were flanked by shops. 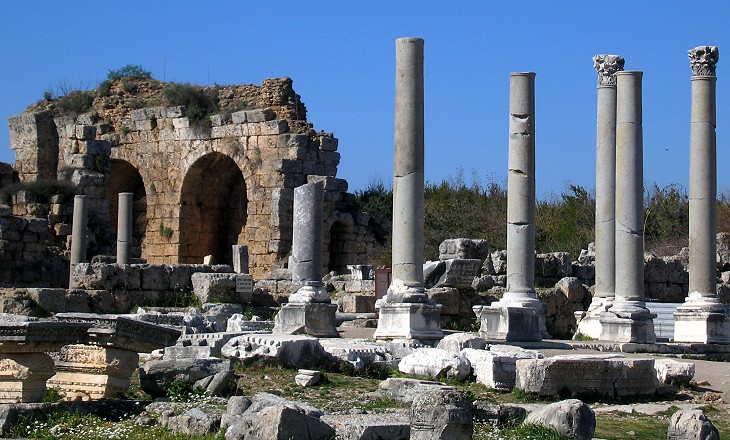 The main baths are located to the west of the gate; they are among the largest and finest ones which can be seen in Turkey. In addition to the traditional three halls (frigidarium - cold, tepidarium - warm, calidarium - hot), they had several open courtyards surrounded by porticoes. The halls and the courtyards were decorated with many statues. These were unearthed in the 1980s and have been relocated to the Archaeological Museum of Antalya. Several of them show mutilation of the genitals, e.g. a statue of Emperor Hadrian, a likely action of the early Christians.

(left) The calidarium; (centre) the heating system under its pavement; (right) a detail of a marble pavement

The calidarium retains evidence of the low pool (piscina) used as bathing place and, due to the partial collapse of the pavement, it is possible to see its heating system. This was called hypocaust (heat from below) and it consisted in raising the floor of the hall so that hot air would pass through this low chamber, thus heating the room. The hot air came from a nearby furnace. In the case of Perge the floor was raised by building small arches, while in general the Romans used piles of low bricks. This change to the usual construction technique was most likely aimed at ensuring a greater stability of the building in case of earthquake.

Two or three temples may be traced, but columns are not so abundant as in most of the ruins which I have visited in this country; perhaps they may have been removed. Fellows
The main street of Perge can be compared with Via Arcadiana at Ephesus for the impressive number of its columns. Some of them were decorated with small reliefs, something which is rather unusual (at Apamea and Palmyra the columns had a projecting pedestal which supported a small statue). One of the reliefs shows Artemis holding a gigantic torch in addition to bow and arrows; Perge had a major temple dedicated to this goddess, but its precise location is still to be found. In another relief a person dressed with the Roman toga pours wine on an altar.

Colonnade: (left/centre) capitals; (right) relief with the symbols of Artemis (see those found at Letoon)

The list of Bishops of Perge reaches the XIIIth century and it is believed the town was finally abandoned during that period when the region saw continuous fighting between the Crusaders and various local emirates; it is somewhat surprising that excavations have not brought to light any churches. 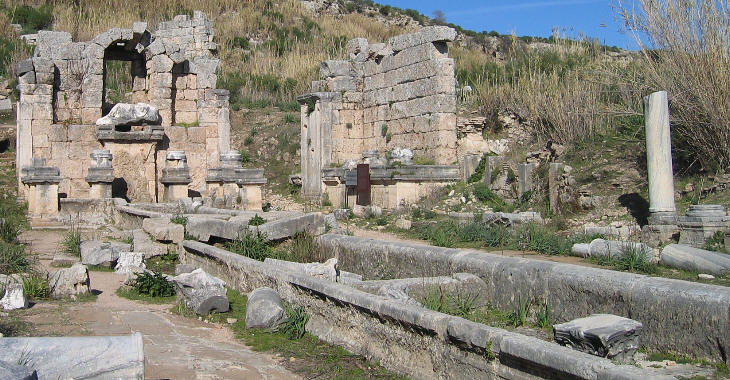 The main street reached the foot of the acropolis and ended with a monumental fountain. The Romans built an aqueduct which supplied the fountain with fresh water; this flowed, through an opening below a statue portraying the River Kestros, into a basin and from there into a canal which divided the colonnaded street.
It is known that the Romans enjoyed listening to the murmur of water; the nymphaeum and the canal must have produced a very refreshing sound (and sight) for the inhabitants of Perge during the very hot summers of Pamphylia.

The adjoining town is surrounded by walls and towers, some square and others round, but the whole purely Greek, there being no trace of any later inhabitants. Fellows
Fellows was unaware that later excavations would have shown that Perge flourished in Roman time, especially in the IInd century AD.
The defence of the lower town required the construction of massive walls which were strengthened by towers some of which had a tympanum shape. 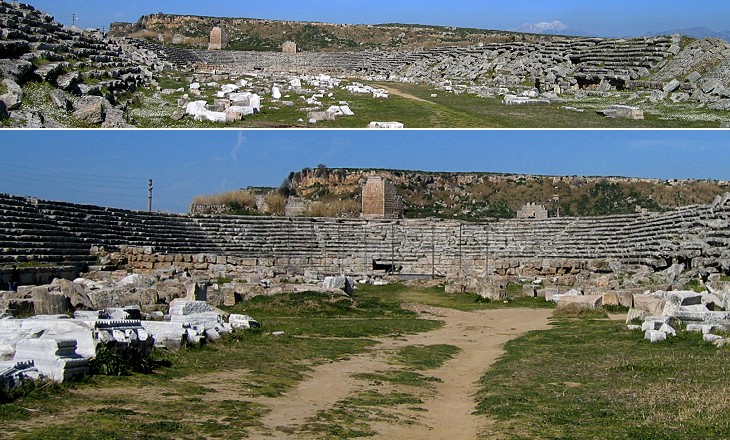 Near the theatre is a stadium, or course for races, which is quite perfect, with seats along each side and also forming a circular end. This building is now used as an inclosure for nursing camels. Fellows
The walls were built when the town was already in a period of decadence and both theatre and stadium were left outside them. Perge had a stadium / circus which could accommodate an audience of 12,000. It was entirely built in the plain. The seats were supported by vaulted structures, which in some cases housed shops selling goods or providing food and beverages.

(left) Site of the theatre; (right) vaulted structure of the stadium

A few arches and ruins of many scattered tombs lead to a theatre, the seats of which for the most part remain, rising very steeply one above the other. Fellows
A theatre stood opposite the stadium: its lower thirteen rows of seats were excavated into the rock of a hill, but during the Roman rule twenty five rows were added which were supported by vaulted structures similar to those of the stadium.

Theatre/stadium reliefs (see those in the Museum of Antalya)

Some cornices and sculpture which remain show the extreme richness of the ornaments. Fellows
In February 2008 most of the reliefs which decorated stadium and theatre were lined up in an open space; most of them portrayed Cupids engaged in various activities.