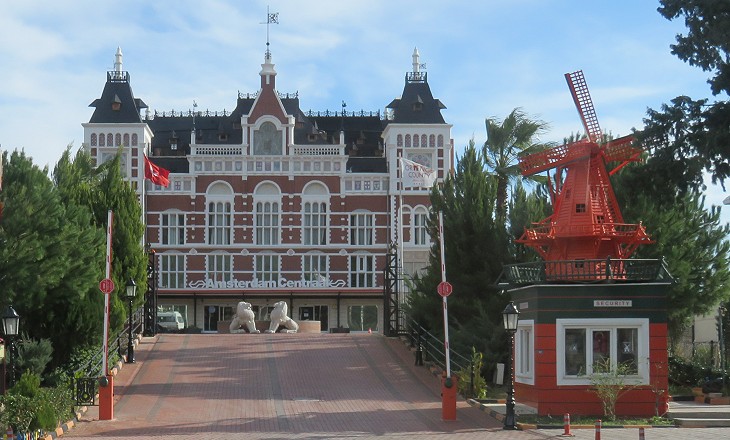 Phaselis was situated on the western side of the Gulf of Antalya which is characterized by high mountains close to the coastline. In the late 1970s the first tourist facilities of this region were built at Kemer, a small town north of Phaselis. Today many very large sea resorts line up for miles and miles. They cater for all tastes, including those of Amsterdam's commuters who miss their Central Railway Station. 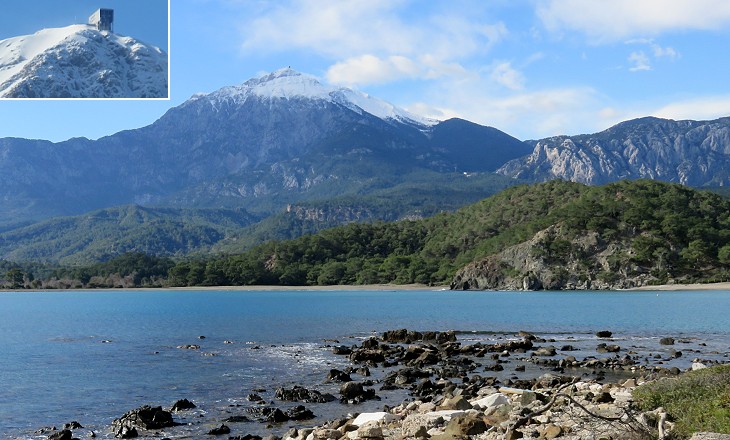 On a small peninsula, at the foot of Takhtalu, are the remains of the city of Phaselis, with its three ports and lake, as described by Strabo. (..) It would almost seem that the town, or perhaps the district, of Phaselis was likewise called Olympus; or possibly, that this was another name for the great mountain of Takhtalu, and that the cities at its base were included in the appellation. (..) The superior magnitude of Mount Takhtalu, from whose lofty summit the view must be as comprehensive as Strabo affirms, appears decisively to point it to this great mountain. It might be added, that the five other mountains of the antient world, to which the name of Olympus was given (see the best known one) are each of them the highest of their immediate districts. (..) The principal port was formed by a stone pier, at the southern side of the isthmus; it projected about two hundred yards into the sea, by which it has been entirely overthrown, and can now only be traced underwater.
Francis Beaufort, Captain of HMS Frederikssteen, a frigate of 32 guns: Karamania; or a brief description of the South Coast of Asia Minor, and of the Remains of Antiquity collected during a survey of that coast, under the orders of the Lords Commissioners of the Admiralty, in the years 1811 & 1812 - Published in 1817
In summer so many sunbathers come to Phaselis by boat from the nearby resorts, that authorities have opened a ticket office on the pebble beach of the ancient southern harbour. Sunbathers go snorkelling around its submerged wharf. In winter the harbour is a very quiet place and it shows all its natural beauty with the snow on the mountains adding to it. 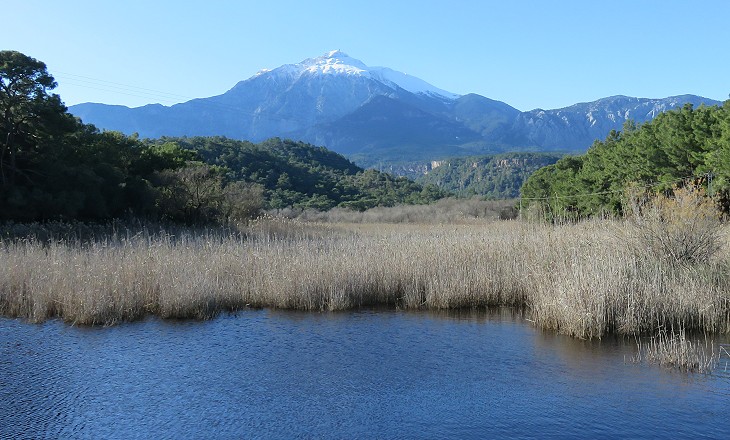 Silted lake/northern harbour; it recalls the harbour of Patara

Phaselis stood on a headland which created three natural harbours of different size. The northern harbour was most likely used for military purposes as it was less visible from the sea. Phaselis was founded in the VIIth century BC most likely by seamen from Rhodes. In the Ist century BC it became a base of the pirates who attacked ships on their way between Syria and Greece. 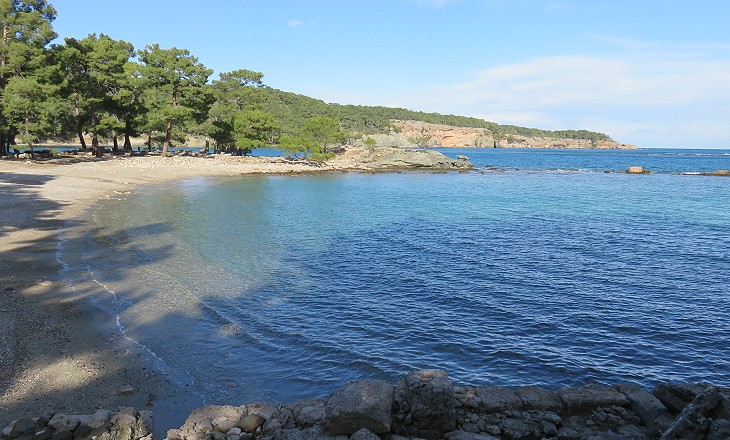 Middle harbour. Kemer and its many sea resorts are situated beyond the cape shown in this image

The two other ports were on the northern side; one of them is very small, with a narrow entrance in the pier, where it seems to have been closed by gates. Beaufort
This harbour was most likely used by small fishing boats because of its shallow waters. There is evidence that, similar to the northern harbour, its mouth was closed by a chain laid between towers standing on now sunken rocks. In 1972 Phaselis was included in a National Park which protects the coastline and its mountains from a point south of Kemer to Cape Gelidonya at the end of the Gulf of Antalya. 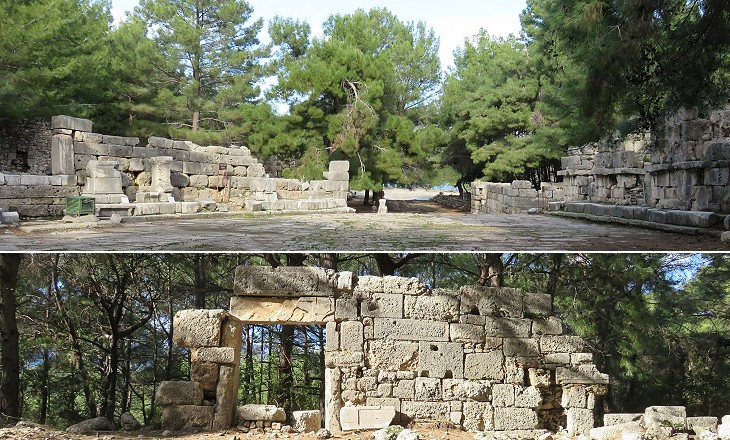 (above) Main square with entrances to the agora (left) and to small baths (right); (below) portal of an enlargement of the agora bearing an inscription celebrating Emperor Domitian

A straight avenue, flagged with marble, leads up from the small eastern port, and terminates between the theatre and the remains of several large buildings. It is about 400 feet long and 30 wide, and from the rows of seats on each side, seems to have been intended for a place of public exhibition. Beaufort
The distance between the middle harbour and the southern one is very short and a wide straight street linked the two harbours. A square at its middle was the centre of the town with tribunals, baths and shops. Along the street and in the agora statues were erected to worthy citizens. By and large, the ruins of Phaselis are dated Ist and IInd century AD, a period of great wealth in most parts of the Roman Empire. 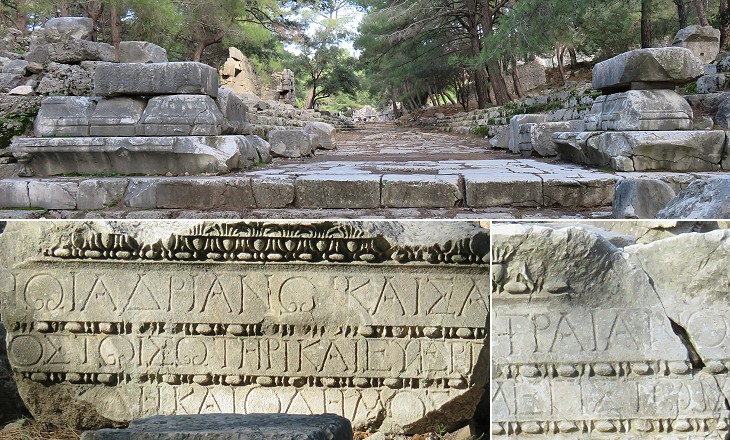 (above) Bases of the Arch of Hadrian and street leading from the southern harbour to the main square; (below) inscriptions making reference to Emperors Hadrian (left) and Trajan (right)

The avenue (..) is overgrown with bushes and strewed with columns, pedestals, and other fragments of large buildings, among which were found many inscriptions, containing the name of Phaselis. (..) Before we departed, all the marbles which bore inscriptions, were replaced in the same situations in which they had been found: or rather, they were put into such positions as appeared best calculated for their preservation; a practice which we constantly adopted, for the benefit of future travellers. Beaufort
Emperor Hadrian, accompanied by his wife Vibia Sabina and a small retinue, landed at the southern harbour of Phaselis in the course of a long journey across many provinces of the Empire. The citizens of the town celebrated the event by erecting an arch at the beginning of the main street. The arch has fallen, but many sections of its dedicatory inscription and fragments of the decoration are scattered nearby. Other inscriptions dedicated to Hadrian have been found in the agora. In one of them the Emperor was celebrated as "Saviour of the World". 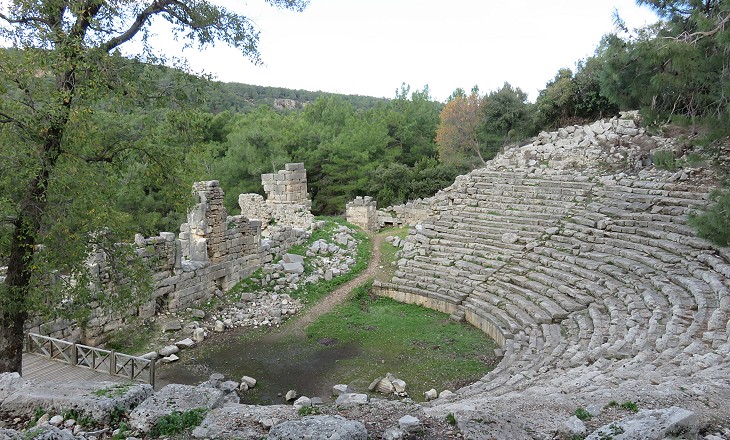 The headland ends with a rocky hill, which was fortified. There is limited evidence of its walls because the headland, upon which the town stood, consists of a soft rock which easily yields to the action of the sea. The cliffs fall in as they become unsupported (..). We may consequently presume, that the town and the peninsula must have once extended beyond their present limits. (..) The theatre is scooped out of the hill; its external diameter is about 150 feet, and part of the proscenium is still erect. It had originally twenty-one rows of seats, which are low and narrow, and without those chiseled channels to carry off the rain, which are to be seen in all the later and better finished theatres (e.g. at Side). Beaufort
A small theatre was built into the slope of the hill near the main square and it was enlarged/rebuilt in the IInd century AD. It could seat an audience of 2,000. 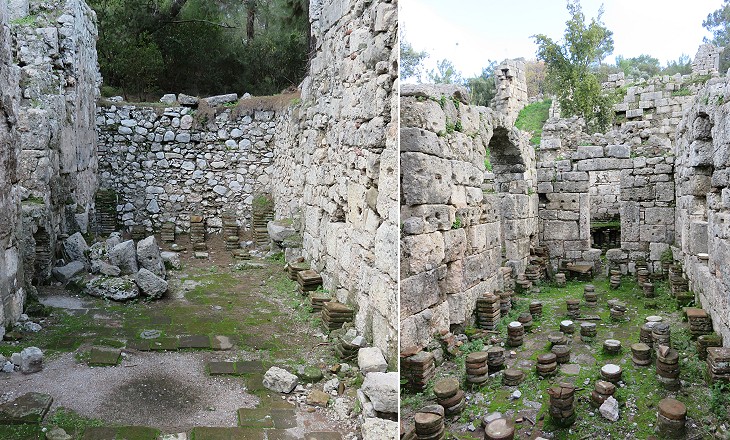 A large bath complex with an adjoining gymnasium has been identified in a series of buildings along the main street near the middle harbour. A second smaller complex was situated between the main square and the theatre. The best preserved sections of the baths are their hypocausti (heat from below), low chambers under the calidaria where hot air flowed from a nearby furnace. 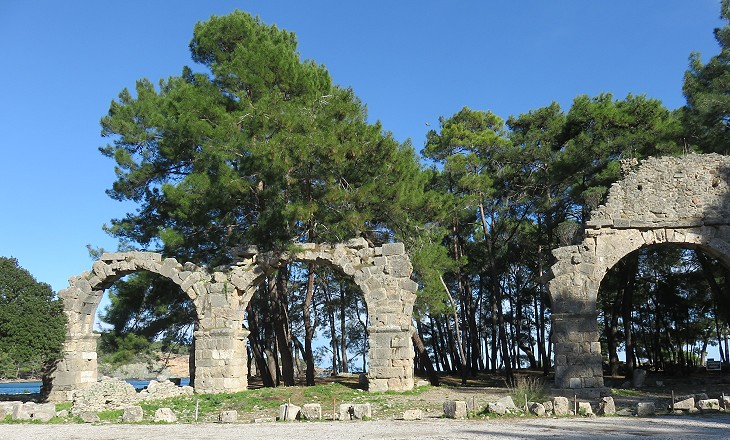 There are also many remains of the antient city; they appear to be of different dates; the semi-circular arches of the aqueduct correspond with the architecture of that period when the Romans were in possession of Asia Minor. Beaufort
The baths (and some fountains) were supplied by an aqueduct which carried water from a spring to the north of the town. It was presumably built in the Ist century AD and its remaining arches are the first thing one sees of Phaselis when coming by land. Sarcophagus near the northern harbour

There are several sarcophagi at Phaselis, but none of their inscriptions were legible, and excepting one, they had all been opened: this had escaped the general fate, having been concealed by a thick covering of earth, which, as it lay close to the shore, the surf had partly removed; thus, leaving one end of it exposed to view. Elated with the discovery we eagerly proceeded to explore its contents: while the necessary implements were collecting, our imagination was on the stretch; and urns, or coins, or antient weapons, at least were expected to reward our labour. At length the tools arrived; the ponderous lid was raised; and the bones of a single skeleton were discovered, and nothing more. These were strong and firm, and did not undergo any immediate change from exposure to the air; the skeleton was of the middle size, and was placed with the face up, and the head to the northward. (..) It has been already observed, that this coast is covered with woods of pine, except where they have been partially cut for fuel, or cleared away in some of the valleys for cultivation. The trees are generally coarse and stunted, but between Phaselis and Cape Avova, a belt of large and handsome pines borders the shore for some miles. We felled several which squared twenty-two inches; and found the timber tough and close grained. Beaufort
Tombs were built outside the town enclosure and fragments of sarcophagi can be seen here and there in the pinewood north of the town and along the seashore. (left) Bases of statues with lengthy inscriptions at the agora; (right) decorative motifs at the southern harbour

Phaselis is recorded as a bishopric see in the Vth century and again in the VIIIth century. It was most likely raided by the Arabs and after the Seljuk conquest of the region in the XIIth century it was abandoned.
The image used as background for this page shows a decorative motif on a broken lintel.