- The Sanctuaries of Dion
(Mosaic portraying Dionysus at Dion)

Then to the palaces of heaven she (1) sails,
Incumbent on the wings of wafting gales;
The seat of gods; the regions mild of peace,
Full joy, and calm eternity of ease.
There no rude winds presume to shake the skies,
No rains descend, no snowy vapours rise;
But on immortal thrones the blest (2) repose;

Olympus was now without a cloud, and his towering summit shone with the most dazzling whiteness. The highest point is shaped like a tumulus: lower down the mountain are forests.
Edward Daniel Clarke - Travels in various countries of Europe, Asia and Africa in 1799-1804
We owe to Homer's poems the identification of Mount Olympus as the seat of the gods' council; from there they watched the events of the War of Troy; from there Athena rapidly descended to help Ulysses' return to Ithaca. Because the origin of Zeus and his brothers Poseidon and Hades is associated with Crete, the placing of the gods' residence on a mountain which is located at the opposite end of the Greek world is regarded as a sign of the country having been invaded by tribes (the Dorians) coming from the north. Other high mountains were named Olympus, e.g. today's Uludag (Great Mountain) near Bursa in Bythinia.
In more general terms initially the location of deities was associated with the deep of the forests (see a page on Dodoni), then with the highest mountains and finally with the clouds.

(left) 1900 Times Atlas of the World map showing Mount Olympus which at that time was located at the border between the Ottoman Empire (pink area) and the Kingdom of Greece (yellow area) - Salamvria=Peneius; (right) XVIIIth century engraving showing the Vale of Tempe and behind it Mount Olympus

The gods they (1) challenge, and affect the skies:
Heaved on Olympus tottering Ossa stood;
On Ossa, Pelion (2) nods with all his wood.
Such were they youths I had they to manhood grown
Almighty Jove had trembled on his throne,
But ere the harvest of the beard began
To bristle on the chin, and promise man,
His shafts Apollo aim'd; at once they sound,
And stretch the giant monsters o'er the ground.

(i) the Giants; (2) another mountain
Homer - Odyssey - Book VI - Translation by Alexander Pope
See details of the frieze which depicted a Gigantomachy on the Altar to Zeus at Pergamum.
The road from Salonica to Larissa is dangerous and unfrequented; so that most persons embark at Salonica for the port of Claritza in Thessaly on the south side of the bay of Salonica, being a Voyage of about fifteen leagues. We (..) arrived late at night, and lay in the open air at the foot of mount Ossa in Thessaly; (..) This place is about two leagues from the river Peneius, which rises in mount Pindus. (..) On the west side of the Peneius is the famous mount Olympus, which the poets feigned to be the seat of the gods. (..) Some say the passage was enlarged by an earthquake, and the poets feigned that the giants put mount Ossa on Pelion and Olympus, and made way for the river to pass freely.
Richard Pococke - A Description of the East and Some Other Countries - 1745
Mt. Olympus is composed of a compact group of mountains; its highest peaks almost reach 10,000 ft; it is separated from Ossa, a lower massif, by the Vale of Tempe, which was the main passage between classic Greece and Macedonia; in antiquity the valley was celebrated as one of the seats of Apollo and the Muses; Emperor Hadrian visited it and in his villa at Tivoli he built a nymphaeum inside a high wall in remembrance of the Peneius River which flows in the valley and through a very narrow gorge.
The map shows the fortress of Platamonas which controlled the northern entrance to the valley. 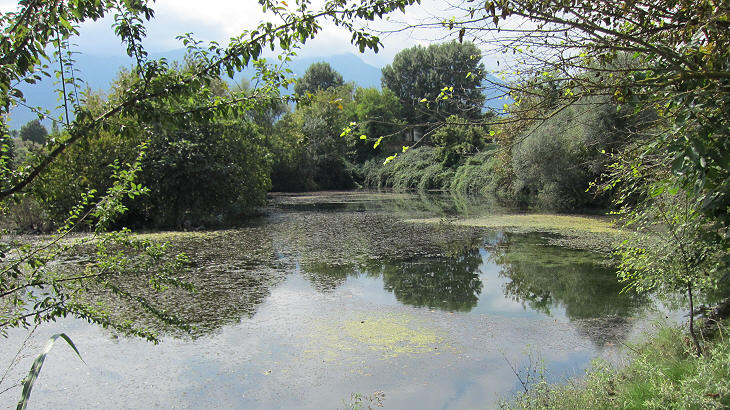 (October 1807) We arrive at Malathria a village lately established by Vely Pasha, occupied by Greek labourers. (..) Five hundred yards below the village, in a thick grove of trees and shrubs, are many copious springs of water, which unite and immediately form a large stream and a marsh.
William Martin Leake - Travels in northern Greece - 1835
In antiquity the coastline was closer to Dion than it is today and the town was linked to the Aegean Sea by a navigable river; the presence of some springs favoured the development of Dion as a privileged location for sanctuaries. 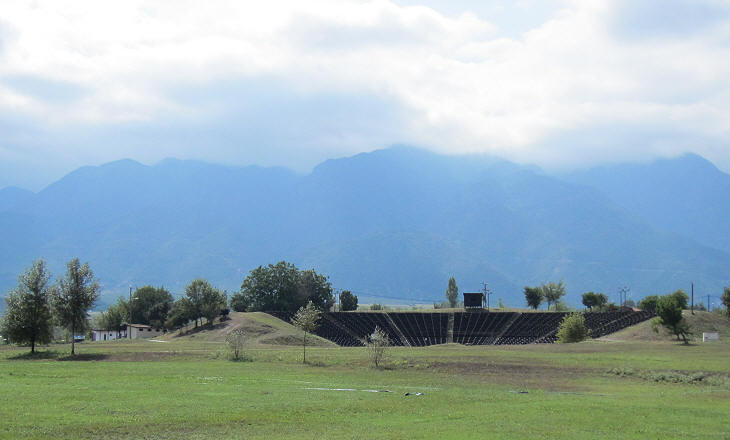 Mount Olympus seen from Dion; in the foreground the reconstructed Greek theatre

In the space between the village and the sources, I find some remains of a stadium and theatre. None of the stone-work which may be supposed to have formed the seats and superstructure of these monuments now exists, with the exception of two or three squared masses on the outside of the theatre; and as the soil is a fine black mould, the effects of the seasons have reduced them both to mere hillocks of earth, but retaining their original form and dimensions sufficiently to show that the stadium was about equal in length to the other stadia of Greece, and that the theatre was about 250 feet in diameter. (..) There can be no doubt that here stood the famous Dium, which, though not large, was one of the leading cities of Macedonia and the great bulwark of its maritime frontier to the south. Leake
The northern side of Mt. Olympus gently slopes towards the Macedonian plain; according to tradition Deucalion built an altar to Zeus on a site which is named Dion. In the Greek myth Deucalion played the same role as Noah in the Bible; he built an ark where he went with his wife to escape a flood which Zeus let loose on the earth to wipe out the whole race of man.
Dion acquired importance in the Vth century BC when the Macedonian kings chose it to make their sacrifices to the gods. 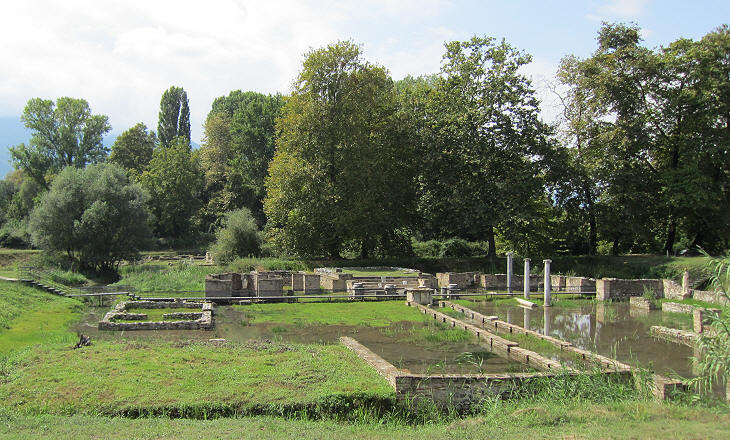 A view of the archaeological site with the sanctuary of Isis

Dion was very dear to the kings of Macedonia and to Alexander the Great who went there to sacrifice to Zeus before starting out his Asian campaign; hecatombs, the sacrifice of a hundred oxen, took place along a very long altar to Zeus Olympios; the altar and Dion were burnt down in the late IIIrd century BC by the Aetolians who were allied with the Romans in the First Macedonian War.
Dion returned to be an important town in the following centuries and in particular in the IInd and IIIrd centuries AD; the large majority of its monuments belong to that period; the city declined when the cult of the Olympian gods was prohibited; earthquakes caused its buildings to collapse and floods covered them with mud.
William Leake was right in associating the ruins he saw with the ancient town. First archaeological explorations were made in the 1860s by Léon Heuzey and Honoré Daumet who worked also at Philippi; today the ruins of Dion are surrounded by a beautifully arranged park, which makes up for the lack of the imposing (and very often reconstructed) monuments of more famous archaeological sites. 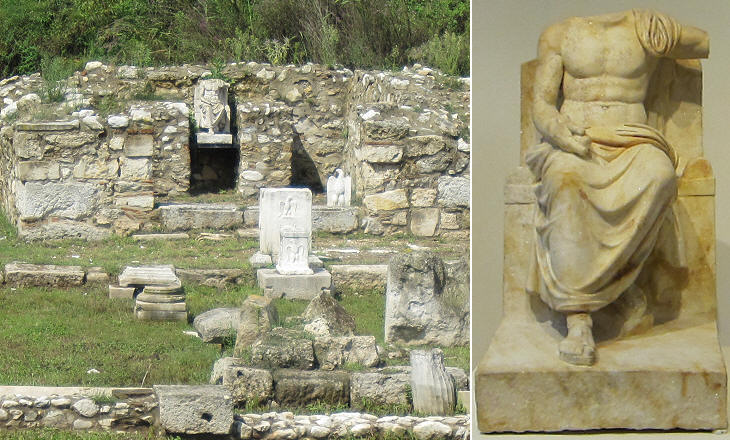 (left) Sanctuary of Zeus Hypsistos (the "most high" God); (right) the original statue in the Museum of Dion

The remains near the sources are probably those of the temple of Jupiter Olympius, from which the city received its name; for we are informed that public games called Olympia, were celebrated at the temple of Jupiter Olympius at Dium. The theatre and stadium served doubtless for that celebration. Leake
The sanctuary of Zeus Hypsistos was unearthed in 2003; the appellation is consistent with the role of Zeus in the Greek pantheon, but it is also indicative of a tendency to move from polytheism to monotheism which characterized the first centuries AD. The identification of Zeus as the supreme god, rather than a primus inter pares, was a step towards diminishing the relevance of other deities.
In this sanctuary archaeologists have found many reliefs depicting eagles, a symbol of Zeus. 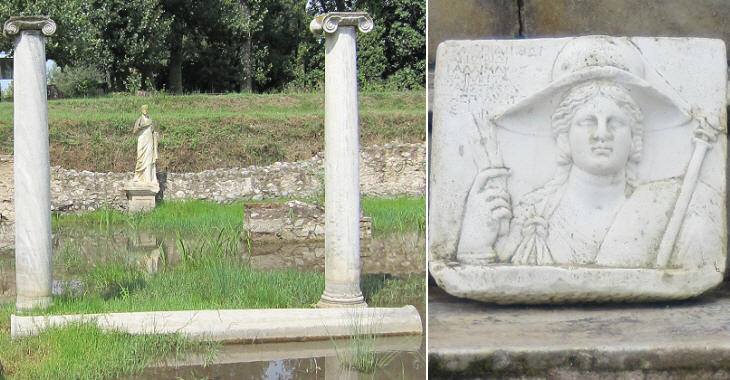 Sanctuary of Isis: (left) detail of the sanctuary with the statue of a donor; (right) relief portraying Isis Lochia (she who protects young mothers) with sheaf and sceptre (also in the image used as background for this page)

The sanctuary to Isis dates back to the IInd century AD, a time when Egyptian deities were extremely popular throughout the Roman Empire; their iconography however had no longer Egyptian features; Isis was identified by a particular knot (tyet) in her garment, which represented the union of divine and human forces (see it also in a gigantic statue of the goddess in Rome). 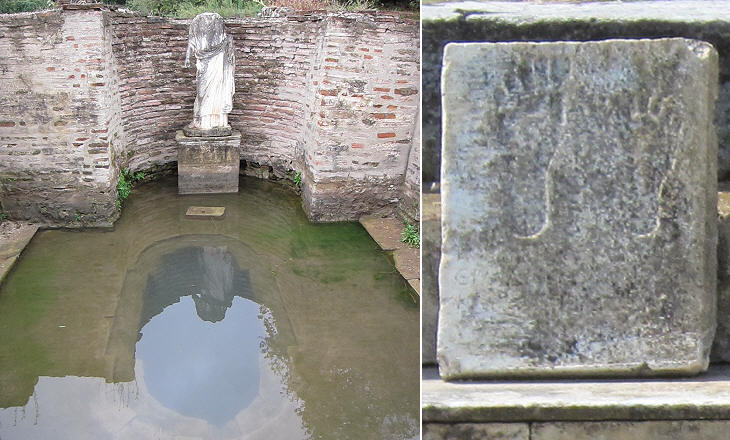 Sanctuary of Isis: (left) statue of Aphrodite Hypolimpidia (under Olympus); (right) ex-voto usually fostering or thanking for a safe return

The sanctuary replaced a previous one which was dedicated to Aphrodite, but this goddess was still honoured in a small nymphaeum adjoining the main temple. The ex-voto is similar to those which can be found in Rome and in Spain. 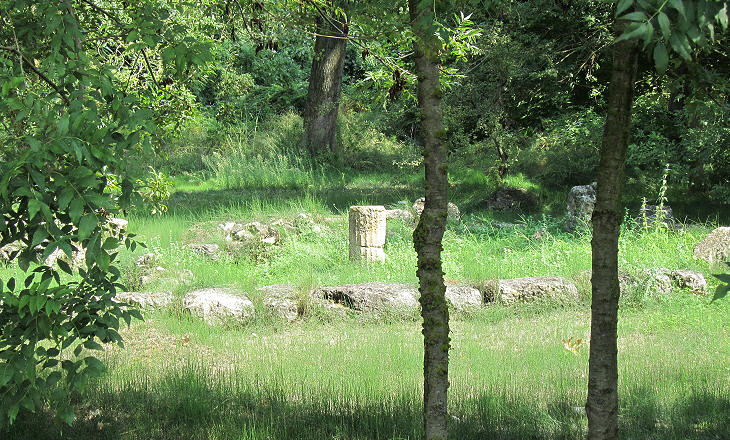 In theory Asclepius, a son of Apollo, was a minor deity, but because he was the god of medicine his popularity did not suffer from the growing importance of deities from Egypt or other countries of the eastern Mediterranean basin; his sanctuary at Dion was located near a pond because ritual baths were part of the prescribed therapy; an enkoimeterion has been identified near the sanctuary; in this building the patients slept and then told the priests their dreams. You may wish to see the sanctuaries to the god at Kos, Epidaurus and Pergamum. 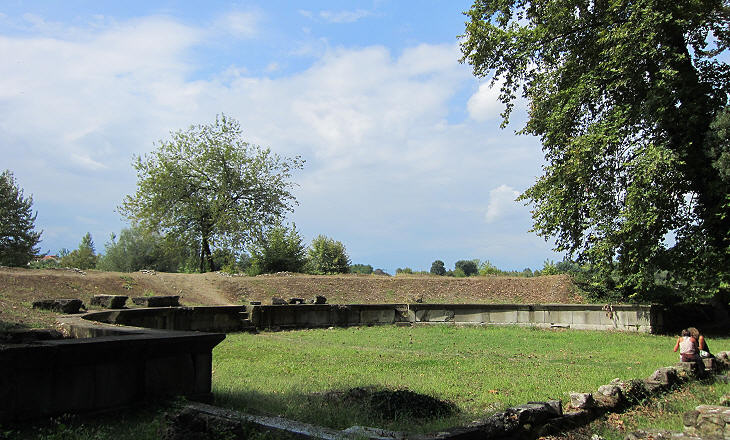 Dion had a theatre excavated out of a small hill; in the IInd century AD, most likely at the time of Emperor Hadrian, the need for another theatre arose; this second theatre was entirely built with stones, bricks and mortars; it was not very large; it is possible that the old theatre was dedicated to gladiatorial fights, while the new facility was reserved for music and poetry contests.
The sanctuaries, the theatres and a stadium were located in an area to the east of the town.

Move to page two to see the town of Dion or to page three which covers the Fortress of Platamonas.