- Eleusis
(a lintel in the museum )

There are many fables of these parts relating to Ceres, Proserpine, and Triptolemus, as Eleusis is said to be the scene of their story. (..) Coming towards the bay, I saw some broken pillars both towards the sea and to the right; this might be the place called Erincon, from which, they say, Pluto carried Proserpine (see the statue by Gian Lorenzo Bernini) to his infernal regions.
Richard Pococke - A Description of the East and Some Other Countries - 1745 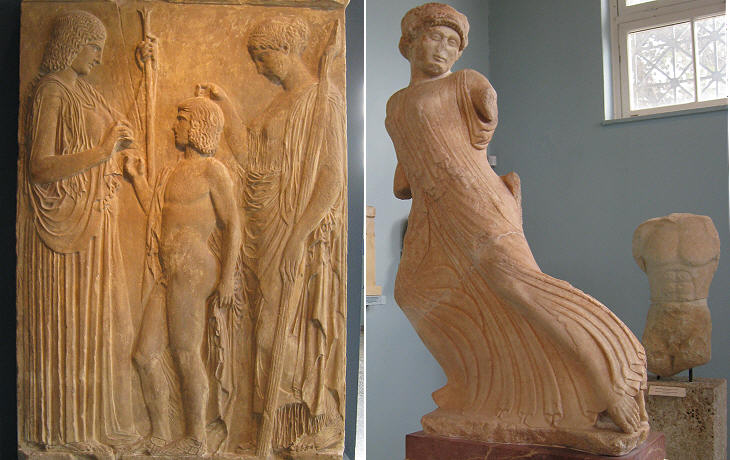 Ceres, says an Athenian orator, wandering in quest of her daughter Proserpine, came into Attica, where some good offices were done her, which it is unlawful for those, who are not initiated, to hear. In return she conferred two unparallelled benefits: to wit, the knowlege of agriculture, by which the human race is raised above the brute creation, and the mysteries, from which the partakers derive sweeter hopes than other men enjoy, both as to the present life and to eternity.
Richard Chandler - An account of a tour made at the expense of the Society of dilettanti - 1775
Initially the ceremonies held at Eleusis were a fertility rite and the celebration of a society based on farming. It is generally thought that the earliest beliefs in Greece and Asia Minor revolved around the cult of a goddess, a Mother Earth named in different ways. A relief found at Eleusis portrays two women (Demeter and her daughter Kore/Persephone) bestowing ears of wheat on Triptolemus, the son of a King of Eleusis, but in this context a personification of mankind. Triptolemus was supplied with a wooden plough and taught how to use it. Demeter is thought to mean Earth-mother; her Roman equivalent is Ceres, goddess of grain. 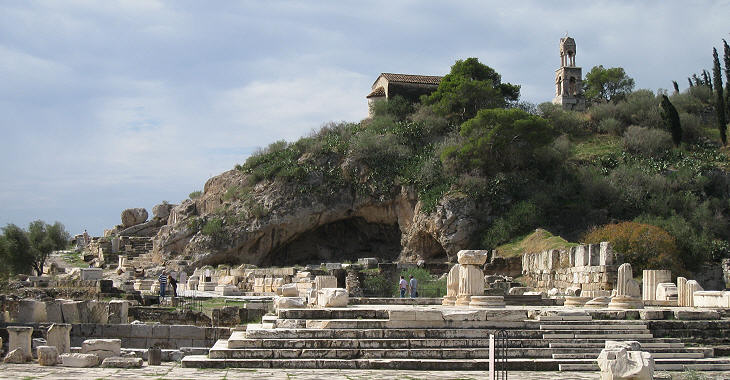 The presence of caverns which were thought to give access to the underworld indicates another aspect of the myth of Demeter/Ceres.
She had a daughter, Kore, to whom she was very attached; at one point the girl disappeared; she was abducted by Hades, God of the Underworld, as she was picking flowers in a meadow near Eleusis. For nine days and nights Demeter sought Kore; she then came to the court of Celeus, King of Eleusis, where Triptolemus, who herded his father's cattle, told her that ten days before a chariot drawn by black horses appeared in the fields, its driver's arm clasping around a shrieking girl. In retaliation against Zeus who had allowed the abduction to occur, Demeter forbade the trees to yield fruit and the herbs to grow and she swore that earth must remain barren until Kore had returned. Eventually a compromise was reached: every year Kore (with the name of Persephone) was to spend three months with Hades, as Queen of Tartarus and nine months with her mother (for the Romans this myth was referred to as that of Proserpina and Pluto). The Greeks worshipped Demeter and Kore together with Hecate, a crone (see a relief at Selinunte).

It was the popular opinion, that the Eleusinian goddesses suggested prudent counsel to their votaries, and influenced their conduct; that these were respected in the infernal regions, and had precedence in the assemblies of the blessed; while the unhallowed were in utter darkness, wallowing in mire, or labouring to fill a leaky vessel. The Athenians were sollicitous to secure these advantages to their children, by having them initiated as soon as was allowed. (..) The Propylaea or vestibules of the temple were opened, the curtains withdrawn, the hidden things displayed. The initiates were introduced by the hierophant who showed them the mysteries. The splendor of illumination, the glory of the temple and of the images, the singing and dancing which accompanied the exhibition, all contributed to sooth the mind and to render the wondering devotee tranquil and self-satisfied. Chandler
The shrine of Eleusis was located fifteen miles north-west of Athens on a gulf which is almost entirely closed by the island of Salamina. The fame of Eleusis was due to its initiation rites (Greater Mysteries and Lesser Mysteries); those admitted gathered in the Telesterion, a large hall which was rebuilt several times; Telesterion means "place for initiation"; the initiates sat on rock cut benches and they were lectured about the content of the ceremonies and shown the sacred relics kept in the shrine. 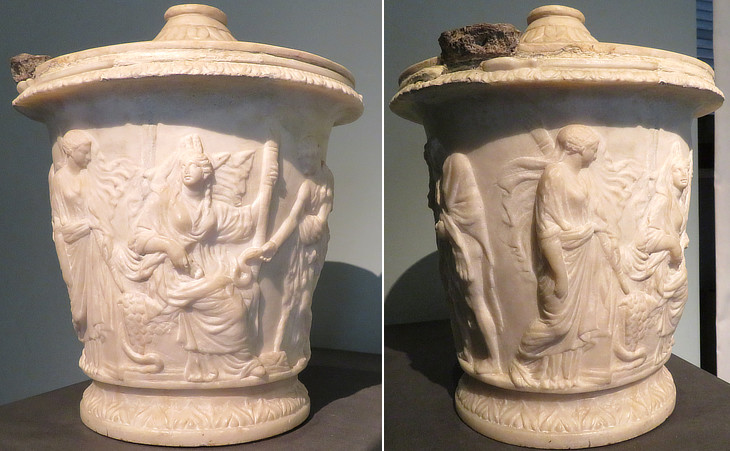 Museo Nazionale Romano: Urna Lovatelli, a cinerary urn with a relief portraying Hercules being introduced to the Eleusinian mysteries: (left) Demeter on her throne with ears of corn; (right) Kore holding a torch

A twelfth labour imposed on Hercules was to bring Cerberus from Hades. Now this Cerberus had three heads of dogs, the tail of a dragon, and on his back the heads of all sorts of snakes. When Hercules was about to depart to fetch him, he went to Eumolpus at Eleusis, wishing to be initiated. However it was not then lawful for foreigners to be initiated: since he proposed to be initiated as the adoptive son of Pylius. But not being able to see the mysteries because he had not been cleansed of the slaughter of the centaurs, he was cleansed by Eumolpus and then initiated.
Apollodorus - The Library - Translation by James George Frazer 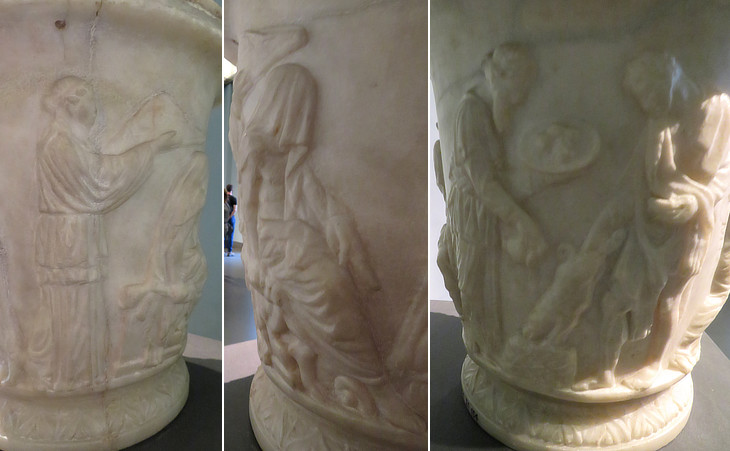 Museo Nazionale Romano: Urna Lovatelli: (left/centre) a priestess holding a plaited willowing fan, an instrument with which the grain was cleansed, over the veiled head of Hercules; (right) Eumolpus, one of the first priests of Demeter and Hercules offering a piglet

The sacrifice of the piglet was an expiatory one: the animal died in place of the initiate.
The urn, which was found near Porta Maggiore is named after Princess Ersilia Caetani Lovatelli (1840-1925), the first woman to be admitted to Accademia dei Lincei, who wrote about the urn in 1879. The urn is dated Ist century AD. 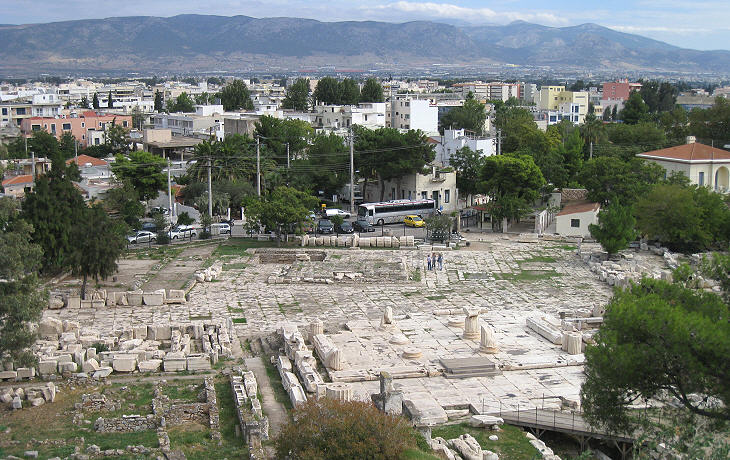 We travelled in that road which was called the Sacred way, because they went by it in procession to the temple of Ceres and Proserpine. (..) In the plain near the north foot of the hill, are many pieces of stones and pillars, which probably are the remains of the temple of Diana Propylaea, which was before the gate of the city. Pococke
The present road is nearly in the same direction; (..) instead of the sepulchres, altars, and temples, now occur solitary churches, and a few traces suggesting unsatisfactory conjecture. Chandler
The initiation ceremonies were preceded by a procession from Athens to Eleusis. This explains the orientation of the various buildings making up the complex of the shrine: the initiates gathered in a large esplanade where they ended a period of fast by drinking kykeon (a mixture of water, barley, honey and leaves), which is thought had psychoactive properties.

At the north foot of the hill, on an advanced ground, there are many imperfect ruins, pieces of pillars and entablatures; and doubtless: I here saw the same sort of Doric capitals as those at Athens, except that they had only three lifts in the quarter round of the capital, and probably are very antient; I saw likewise a fine Ionic capital, and one of a pilaster of the Corinthian order, which probably belonged to some later improvements of the temple. Pococke
The English traveller realized that some of the remains he saw were built during the Roman rule over Greece which began in the IInd century BC and did not impact on the fame of the shrine; the rule which restricted the initiation rites to the Athenians was in various ways circumvented to allow access to all citizens of the Empire. Cicero, who was very critical of Greek influence on Roman customs, nevertheless praised the Eleusinian Mysteries "for by their means we have been brought out of our barbarous and savage mode of life and educated and refined to a state of civilization; and as the rites are called initiations, so in very truth we have learned from them the beginnings of life, and have gained the power not only to live happily, but also to die with a better hope".
Consul Appius Claudius Pulcher, a contemporary of Cicero, built a new entrance to the acropolis of Eleusis; its decoration is still referred to the traditional celebration of farming, but at that time (as Cicero's words testify), the rites were already seen as a mean to gain an insight into the mystery of life (and afterlife). The inscription dictated by Appius Pulcher is written in Latin, whereas in the following centuries the Roman emperors preferred to use Greek for their inscriptions. 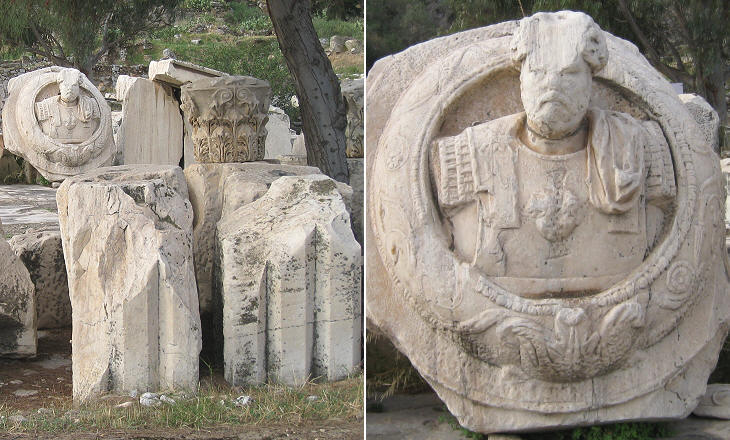 (left) Elements of the Great Propylaea; (right) bust of Emperor Antoninus Pius inside a clipeus a round shield (see similar busts from Chiragan near Toulouse)

The secrecy, in which the mysteries were enveloped, served to enhance the idea of their consequence, and to increase the desire of participation. It was so particular, that no person was allowed even to name the hierophant by whom he had been initiated. Chandler
Emperor Hadrian was initiated into the Eleusinian Mysteries; he and his successors Antoninus Pius, Marcus Aurelius and Commodus all protected the shrine and contributed to its embellishment; it is thought that the changes were completed by Commodus after a raid by Sarmatians damaged the sanctuary in 170. In particular the changes included a new grand entrance with columns of a colossal size and two triumphal arches. 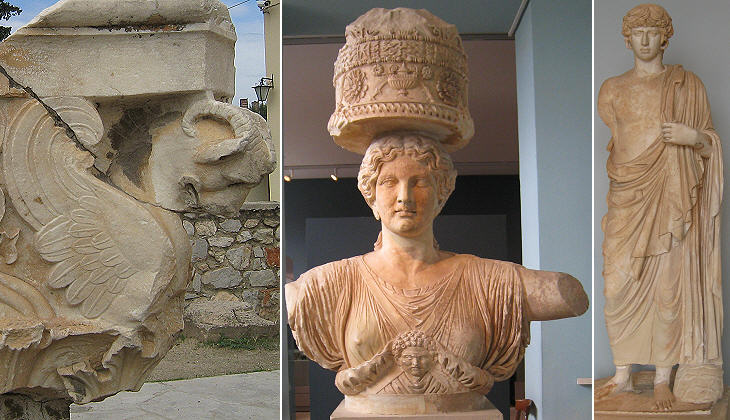 The story of Ceres and Proserpine was both verbally delivered, and represented in allegorical show. (..) Proserpine was gathering flowers when she was stolen by Pluto. Hence the procession of the holy basket, which was placed on a car dragged along by oxen and followed by a train of females, some carrying the mystic chests, shouting. Hail Ceres. Chandler
kanephoros is a particular type of caryatid or herm; a very fine example of kanephoros embellished the House of Augustus in Rome. A statue of Antinous was worshipped in an underground temple; the head is very similar to that of a (much superior) statue at Delphi, but the body is that of another statue.
The museum attached to the archaeological area houses many exhibits of the Roman period. 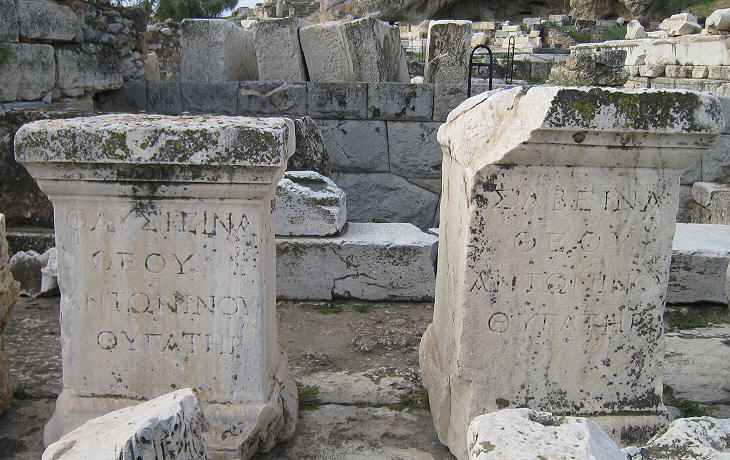 Pedestals of statues dedicated to Faustina (left) and Sabina (right)

The IInd century Roman enlargement/reconstruction of Eleusis included several references to the women of the imperial family; unfortunately for archaeologists and historians inscriptions usually referred to either Sabina or Faustina, names which often occurred in the imperial family during the IInd century. It seems most probable that a temple was dedicated to Vibia Sabina, wife of Hadrian, and another one to Annia Faustina, wife of Antoninus Pius. This was part of a policy implemented by Antoninus Pius in order to show that the Roman emperors abided by family values.

All up the east end of the hill are ruins, and on the top of it are many cisterns to receive the rain water. Pococke
When visiting an archaeological site the history of which includes a Roman period, it is not unusual to find complex engineering works aimed at providing and distributing water; this happens in Eleusis too. After the 170 Sarmatian raid and most likely after the 267 invasion of Greece by the Heruli, the walls of Eleusis were strengthened; excavations have brought to light some ancient sections of walls with fine examples of isodomic masonry (i.e. composed of stones of uniform size).
The life of the shrine spans more than a thousand years: the exact date of its foundation is unknown, but it is generally set in the VIIth century BC. In 392 AD Emperor Theodosius declared the Christian faith the sole religion of the Roman Empire and he decreed the closure of Eleusis as well as that of other non-Christian shrines and oracles. The interest towards the ceremonies performed at Eleusis did not vanish immediately and in the Vth century Neoplatonist philosophers and in particular Proclus looked at them as a way to develop a universal faith. In 529 the closure of the Academy of Athens decreed by Emperor Justinian and the policies he implemented to eradicate non-Christian beliefs led to the abandonment of the shrine. 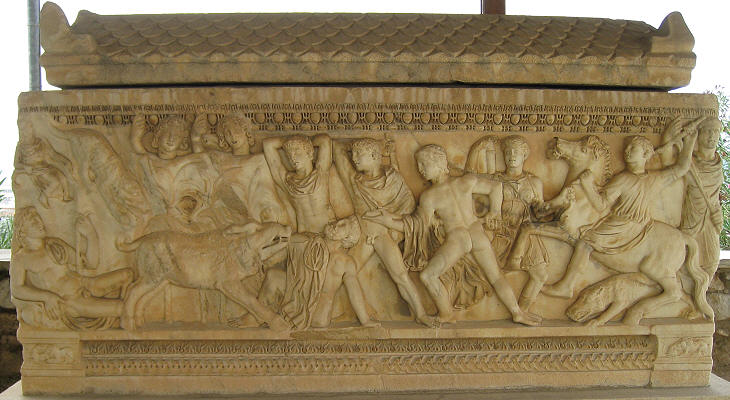